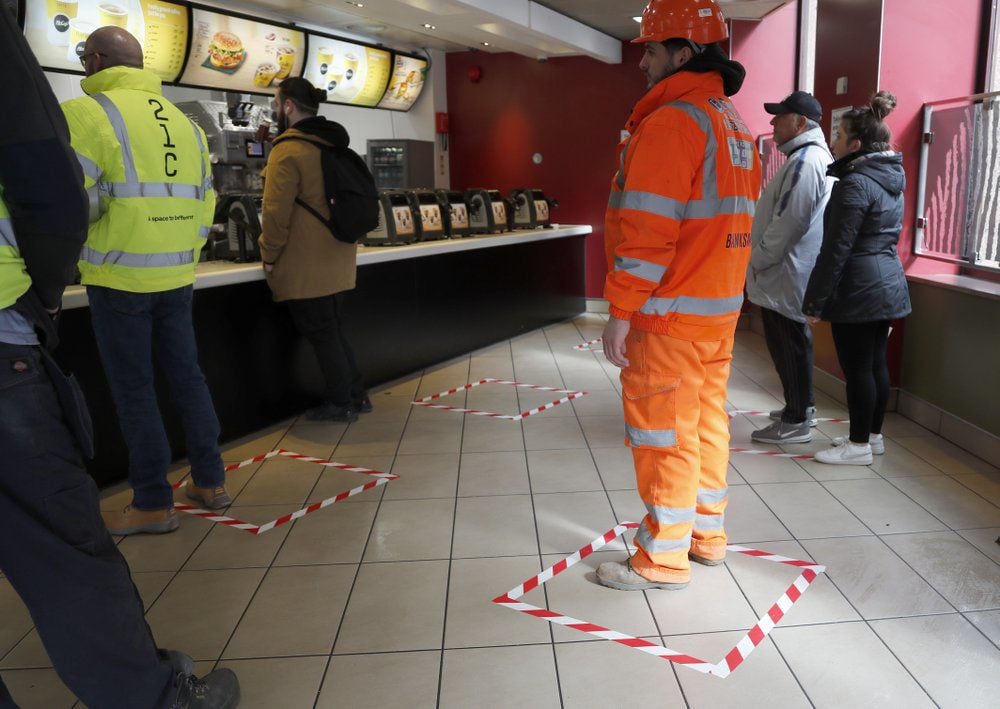 People stand in marked places to keep a social distance at a fast food restaurant in London, Friday, March 20, 2020. For most people, the new coronavirus causes only mild or moderate symptoms, such as fever and cough. For some, especially older adults and people with existing health problems, it can cause more severe illness, including pneumonia. 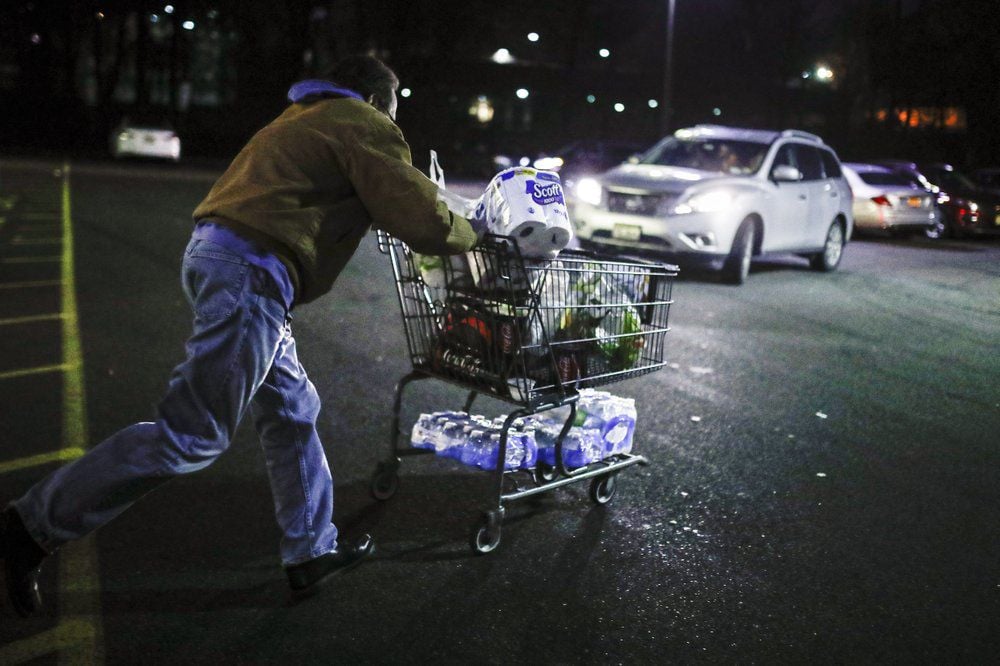 Customer Harry Westhoff, 71, runs his groceries back to his car after shopping at a Stop & Shop supermarket that opened special morning hours to serve people 60-years and older due to coronavirus concerns, Friday, March 20, 2020, in Teaneck, N.J. For most people, COVID-19, the disease caused by the new coronavirus, causes only mild or moderate symptoms, such as fever and cough. For some, especially older adults and people with existing health problems, it can cause more severe illness, including pneumonia.

People stand in marked places to keep a social distance at a fast food restaurant in London, Friday, March 20, 2020. For most people, the new coronavirus causes only mild or moderate symptoms, such as fever and cough. For some, especially older adults and people with existing health problems, it can cause more severe illness, including pneumonia.

Customer Harry Westhoff, 71, runs his groceries back to his car after shopping at a Stop & Shop supermarket that opened special morning hours to serve people 60-years and older due to coronavirus concerns, Friday, March 20, 2020, in Teaneck, N.J. For most people, COVID-19, the disease caused by the new coronavirus, causes only mild or moderate symptoms, such as fever and cough. For some, especially older adults and people with existing health problems, it can cause more severe illness, including pneumonia.

Less than three months ago came the first reports of cases of pneumonia related to a virus first detected in Wuhan, China. The outbreak of the virus that causes COVID-19 has caused unprecedented disruptions that have brought an unparalleled shock to the global economy.

Following are developments Friday related to the outbreak, efforts by governments to stabilize their economies, companies that must navigate through an altered landscape, and the millions of people affected.

The lowest number of passengers ever recorded at U.S. airports is being reported by the Transportation Security Administration. Nearly 624,000 people passed through its outbound checkpoints on Thursday, the TSA said. That compares with 2.4 million on the same day a year earlier. It’s the lowest number of outbound passengers ever recorded by an agency created in November 2001 in the wake of the Sept. 11 terrorist attacks.

The CEO and labor leaders at American Airlines wrote to Treasury Secretary Steve Mnuchin and congressional leaders Friday imploring them to quickly approve aid for airlines or else workers will lose their jobs. The company says it will accept “appropriate conditions” on government aid.

Frankfurt airport operator Fraport AG has put 18,000 of its 22,000 employees on shortened schedules, saying that “traffic has come almost to a halt.”

American Airlines is initiating cargo-only flights between the US and Europe. FedEx and UPS were expecting to absorb a greater share of cargo typically carried by commercial airlines, which have severely cut capacity.

Air Canada is laying off more than 5,000 flight attendants, about 60% of that staff, according to a union official, as the country’s largest airline grounds its planes.

Ethiopian Airlines, Africa’s largest carrier, canceled flights to 30 countries on Friday and CEO Tewolde Gebremariam said it has lost $190 million due to disruptions related to the coronavirus.

With outbreak-related layoffs expected to surge, at least two major retailers are hiring in a big way. Walmart, the nation’s largest retailer, said late Thursday that it plans to hire 150,000 U.S. hourly workers for its stores and distribution centers through the end of May as online orders surge with households stocking up. The jobs are temporary, but many will become permanent, said spokesman Dan Bartlett. He said that the company is reaching out to industry groups in the restaurant and hospitality industry, both of which are getting slammed by lockdowns and travel bans. Amazon this week said it would hire 100,000 people across the U.S. to keep up with a crush of orders hires.

Target Corp. said Friday it will give a $2 an hour wage increase to its 300,000-plus workers who have been scrambling to help customers. The pay bump will be effective at least through May 2. It’s also begun offering workers who are pregnant, 65 years old or older, or who have underlying health risks, access to paid leave for up to 30 days. Target joins Amazon and Walmart which are offering extra incentives like cash bonuses or a temporary wage bump as they try to manage the crush of customers while simultaneously looking to keep their workers happy.

Starbucks said it will pay its workers for the next 30 days, whether they come to work or stay home. The coffee chain also said it is temporarily closing access to its stores across the U.S., and reducing services to drive thru and delivery only.

Canadian Prime Minister Justin Trudeau says his government has received 500,000 applications for employment insurance compared to just 27,000 for the same week last year. Trudeau says they are receiving a historic number of calls from concerned Canadians amid the pandemic. This week, the U.S. reported the number of Americans filing new claims for unemployment benefits surged by 70,000 to the highest level in more than two years.

The chairman and CEO of Marlboro-maker Altria Group has contracted COVID-19. The company said in a regulatory filing that Howard Willard is on medical leave. Chief Financial Officer William Gifford, Jr. will lead the company in Willard’s absence. The company is also suspending operations at its plant in Richmond, Virginia, for two weeks after two employees contracted the COVID-19 virus. Some domestic operations at its John Middleton Co. subsidiary will also be suspended due to supply chain issues. The tobacco giant said employees will continue to receive regular pay during the two-week shutdown.

NBC News reported Friday that an employee who worked at the company’s 30 Rockefeller Plaza headquarters in New York has died from COVID-19. According to his wife, Larry Edgeworth had other health issues before contracting the coronavirus. Edgeworth died Thursday.

Companies across almost every sector are raising cash to ride out the outbreak. Kohl’s has fully drawn its $1 billion unsecured credit facility. The department store chain, based in Menomonee Falls, Wisconsin, is slashing inventory and expenses.

Kohl’s Corp. has closed its 1,100 stores for at least the rest of the month. It and many other major chains are temporarily closing stores to curb the spread of the coronavirus.

Kohl’s withdrew its full-year and first-quarter forecasts. Several other chains like Nordstrom and Abercrombie & Fitch have also withdrawn their guidance given so much uncertainty.

Thousands of businesses have ordered employees to work remotely. It’s obviously not an option for a number of sectors and the impact on heavy industry has been immense. All major U.S. automakers, including Tesla, have shut down their factories.

Mercedes-Benz and BMW are the latest automakers to announce that they’re pausing production due to the coronavirus threat, bringing almost the entire U.S. auto industry to a halt. Mercedes said Friday its auto plant in Tuscaloosa, Alabama, and a van factory in Charleston, South Carolina, will start to wind down production Monday, likely for two weeks. BMW also said Friday that it will shut down its huge manufacturing complex near Spartanburg, South Carolina, starting April 3. The closure will run through April 19. Earlier this week Honda, General Motors, Ford, Fiat Chrysler, Toyota, Nissan, Subaru, Volkswagen, Hyundai-Kia and Tesla said they would suspend production.

Jaguar Land Rover is suspending production at its U.K. plants but its manufacturing plants in Brazil and India continue operating. The company’s joint venture plant in China reopened around a month ago. Other firms including BMW, Honda and Toyota have already halted production in the U.K.

Volvo Cars said Friday that its Swedish and U.S. plants will close on Thursday and will remain closed until mid-April. Office employees are being ordered to work remotely with reduced hours. The company said it reopened four manufacturing plants in China earlier this month after an extended closure.

YouTube is reducing its streaming quality in Europe as more users self-isolate at home. The company, owned by Google, said Friday it would “temporarily default all traffic in the U.K. and the EU to Standard Definition,” instead of high definition. The measure will be in place for 30 days and users will still be able to manually adjust their video quality.

YouTube follows Netflix, which said Thursday that it expects the video bit rate reduction to cut its European traffic by a quarter.

The companies are responding to a call by the European Union’s internal market commission, which urged streaming services and network operators to help prevent network congestion as more people use their home internet connection to work or learn remotely or for entertainment.

Apple is allowing people to buy only two iPhones online. It appears to be attempting to prevent the large purchase and resale of its technology at higher prices. Apple is facing a potential demand decline and supply chain issues due to the virus pandemic spreading across the globe. It closed all retail stores outside of China to help fight the spread. Apple did not return a request for comment Friday. Apple announced a new iPad Pro and MacBook Air on Wednesday. It made no mention of new iPhones during the announcement.

The Associated Press contributed to the information in this report.