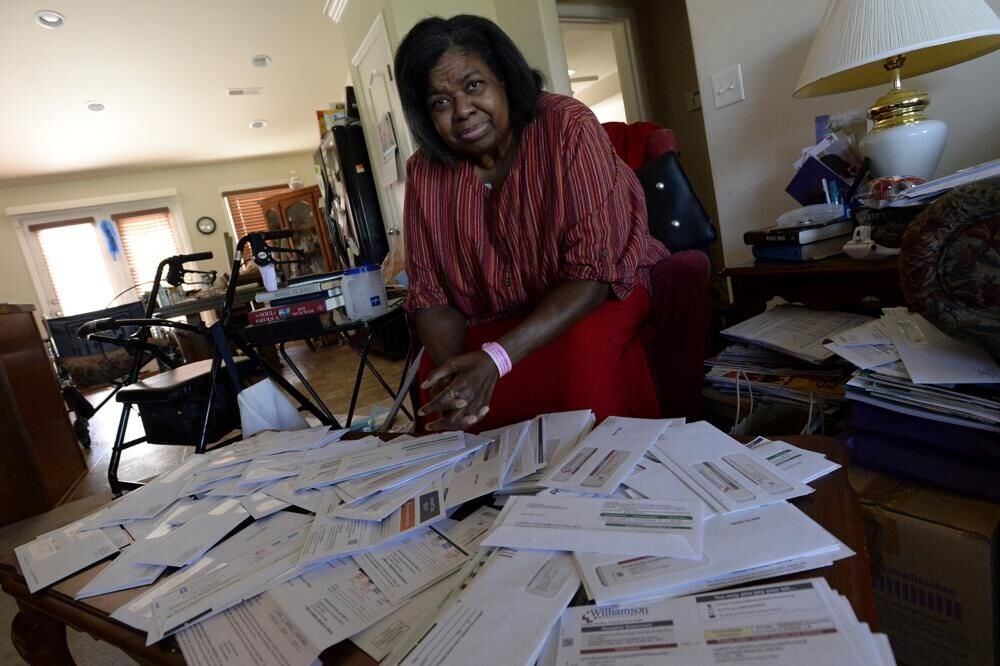 Debra Smith, 57, sits with her medical bills in Spring Hill, Tenn. Smith says she can afford to pay the hospital $10 a month, which the hospital rejected. 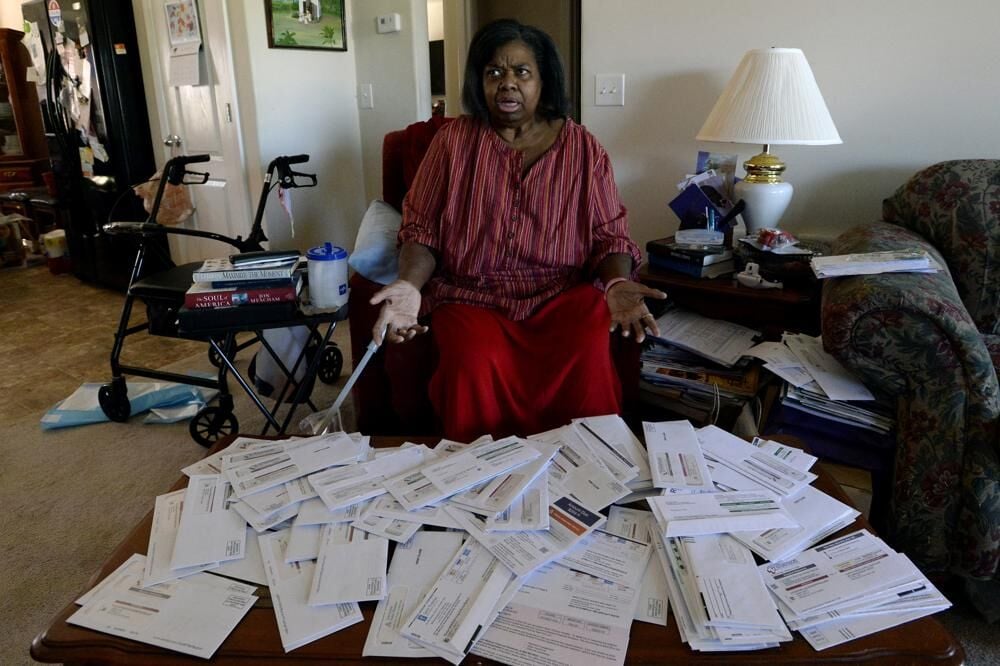 Debra Smith, 57, talking about her $10,000 in unpaid medical bills. Patient advocates and some state governments say hospitals must do more to help patients deal with medical bills before the debt winds up in collections. 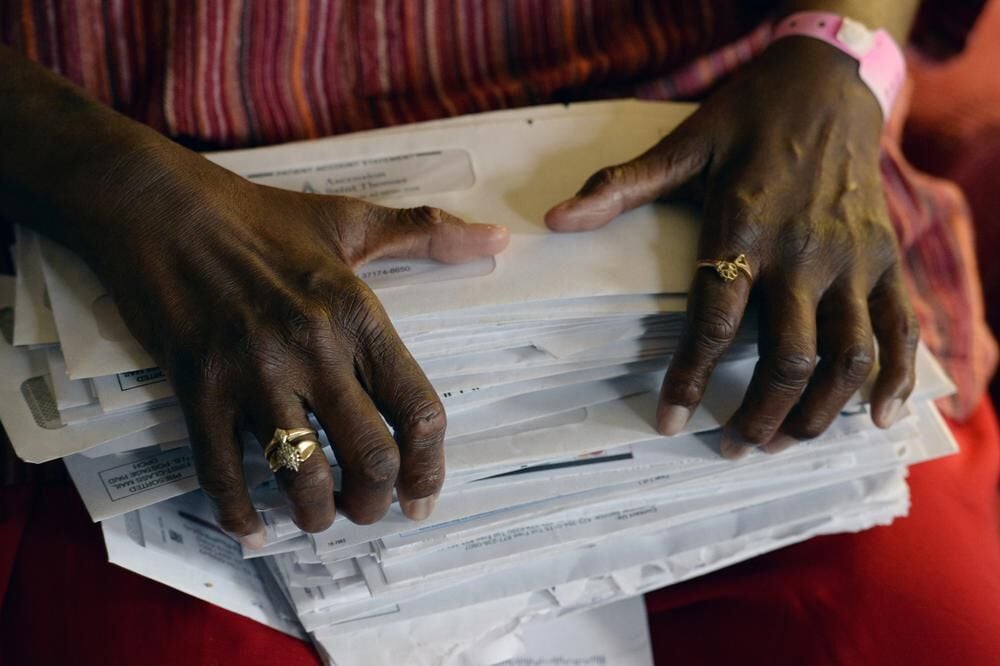 Debra Smith holding her medical bills after a string of hospital stays over the past year. She has around $10,000 in unpaid medical bills even though she has coverage through Medicare. 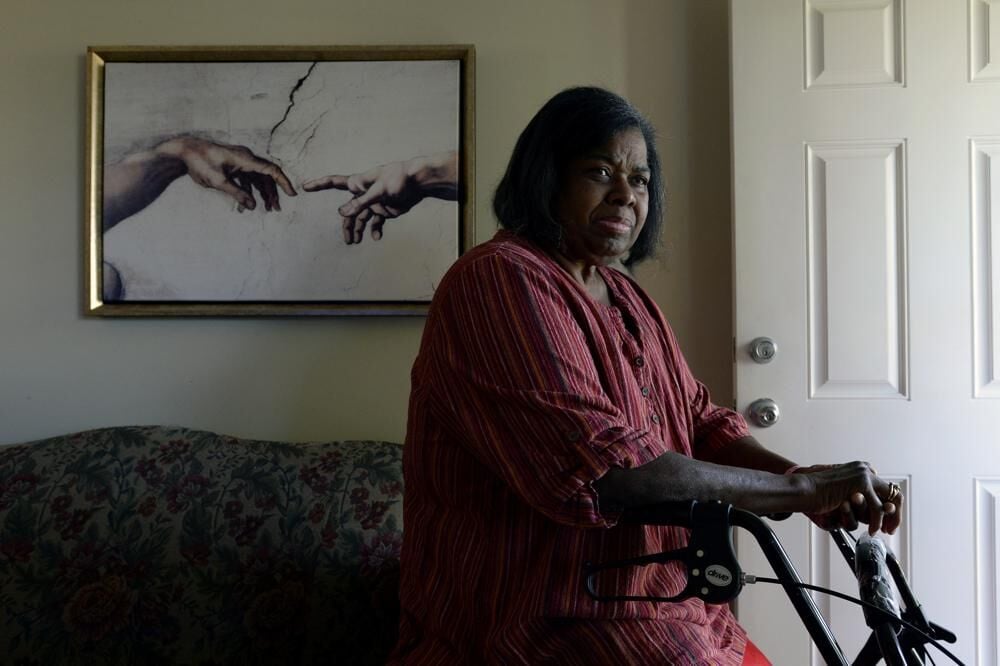 Debra Smith has health problems that prevent her from working. Living expenses and prescriptions consume most of the $2,300 a month she gets from a pension and Social Security.

Swamped with medical bills? The hospital that treated you may be able to help. But whether you learn about this before those bills wind up in debt collections is another matter.

Medical bills often represent large, unexpected shocks that can crash personal budgets. Roughly 1 in 7 U.S. residents with a credit record has medical debt in collections, according to the nonprofit Urban Institute.

Hospitals have ways to keep more people from joining those ranks. Those can include income-based discounts, payment plans, help finding health insurance or waiving a bill and writing it off as charity care.

But people frequently miss notices in their bills about assistance or have trouble plowing through the paperwork to qualify, patient counselors say. They say hospitals need to do more to ensure patients know about available help.

“We need a whole new mindset,” said Elisabeth Benjamin, a vice president with the nonprofit Community Service Society of New York. “A hospital’s a charity ... (it) should be figuring out why a patient isn’t able to pay a bill.”

Getting financial help from hospitals

The Affordable Care Act requires nonprofit hospitals to tell patients about financial help, but it leaves the details for how that gets done or the extent of the assistance largely up to the hospitals. Patient counselors see little consistency.

Hospitals say they often notify patients several times about available help. They’ve also eased income limits for assistance during the COVID-19 pandemic, and some have smoothed out cumbersome applications.

But it can be hard to identify everyone who needs help, said Rick Gundling, a senior vice president with the Healthcare Financial Management Association, which consults with hospitals.

“I think many times when the patient doesn’t have the money, they retreat or they don’t ask for help, when the hospital can help,” Gundling said.

Assisting people in the middle of a medical crisis can be difficult. Patients often have no idea when they receive care what it will ultimately cost and how much help they will need. A slew of insurance notices and bills that arrive later can sow more confusion.

Benjamin said she once helped a patient who had one kidney stone removed and received 28 bills.

Hospitals frequently post notices about financial help on emergency rooms walls or in bills sent to patient homes. But those can be overlooked or forgotten.

“People never read the whole bill. They’re scary and overwhelming,” said Benjamin, who would like to see hospitals include a one-page financial aid form with their bills.

Other advocates say information about financial assistance should be included on paper that’s a different color and more noticeable. They also want hospitals to check back in with patients to see if they need help once a bill becomes overdue.

Communication often is the biggest barrier low-income patients face in dealing with hospitals, according to Ilda Hernandez, a community health worker at the advocacy group Enlace Chicago.

Most patients, Hernandez said, are never informed about available assistance or even that hospitals have interpreters.

“They’re not told that they can ask for a social worker at a hospital,” she said, “and so patients don’t ask.”

Hospitals often post information about available help online. But that can be hard to find.

Jared Walker, who runs a nonprofit called Dollar For that helps people with medical debt, posted a TikTok video in January that shows how to search for financial assistance on hospital websites. It has since been viewed more than 20 million times.

“Hospitals aren’t shouting from the rooftops that you can apply for charity care, that’s for damn sure,” said Walker.

Some hospitals – and state lawmakers – are trying to make improvements.

Oregon Health & Science University slimmed its application for assistance a couple of years ago.

When someone requests help paying for emergency or medically necessary care, the Portland academic health center now just asks for patient income, which it verifies with a soft credit check. That approach replaced a paper application that required several documents.

“We’re here to take care of people. We’re not here to have people worry about their medical bills,” said Kristi Cushman, the center’s director of patient access services.

Several states have laws that require hospitals to offer a range of free or discounted care, usually based on income, according to the National Consumer Law Center.

A new Maryland law requires hospitals to show that they provided information on financial assistance and made a good-faith effort to set up a payment plan before they sue over a medical debt.

That makes the hospital prove it has done all it can to make patient payments affordable, said Marceline White, executive director of the Maryland Consumer Rights Coalition.

“It shifts the burden appropriately to the hospital, the multimillion-dollar entity, as opposed to the person making $40,000,” she said.

No such burdens have shifted in Tennessee, where Debra Smith worries she may be denied future medical care because of her bills.

The Spring Hill resident figures she has more than $10,000 in unpaid medical bills from a string of hospital stays over the past year, even though she has coverage through Medicare. She hasn’t been able to make much progress paying them off.

Smith sought help from Williamson Medical Center in nearby Franklin earlier this year for a $1,500 bill, but they couldn’t settle on a payment plan that fit her budget.

Health problems prevent Smith from working. Living expenses and prescriptions consume most of the $2,300 a month the 57-year-old gets from a pension and Social Security.

She found the hospital’s application for financial help online, but she never completed it. That form asks for copies of bank statements, utility and credit card bills, car payments and other paperwork. To Smith, it felt like they wanted reasons to reject her.

Medical center spokesman Mike Alday said he couldn’t comment on a specific patient’s situation. But he did say the medical center has to confirm a patient’s financial need before providing help, and the information it requests is standard among hospitals.

Alday said the medical center makes financial counselors available and offers discounts and payment plans if patients don’t complete financial aid applications. It would give someone with a $1,500 outstanding balance 18 months to pay it off. That amounts to monthly payments of around $83.

Smith figures she can handle about $10 a month, which she said the hospital rejected.

“I know the hospitals needs their money but ... I am in need too,” she said. “I don’t want anything for free, but under the circumstances a little understanding would be nice.”