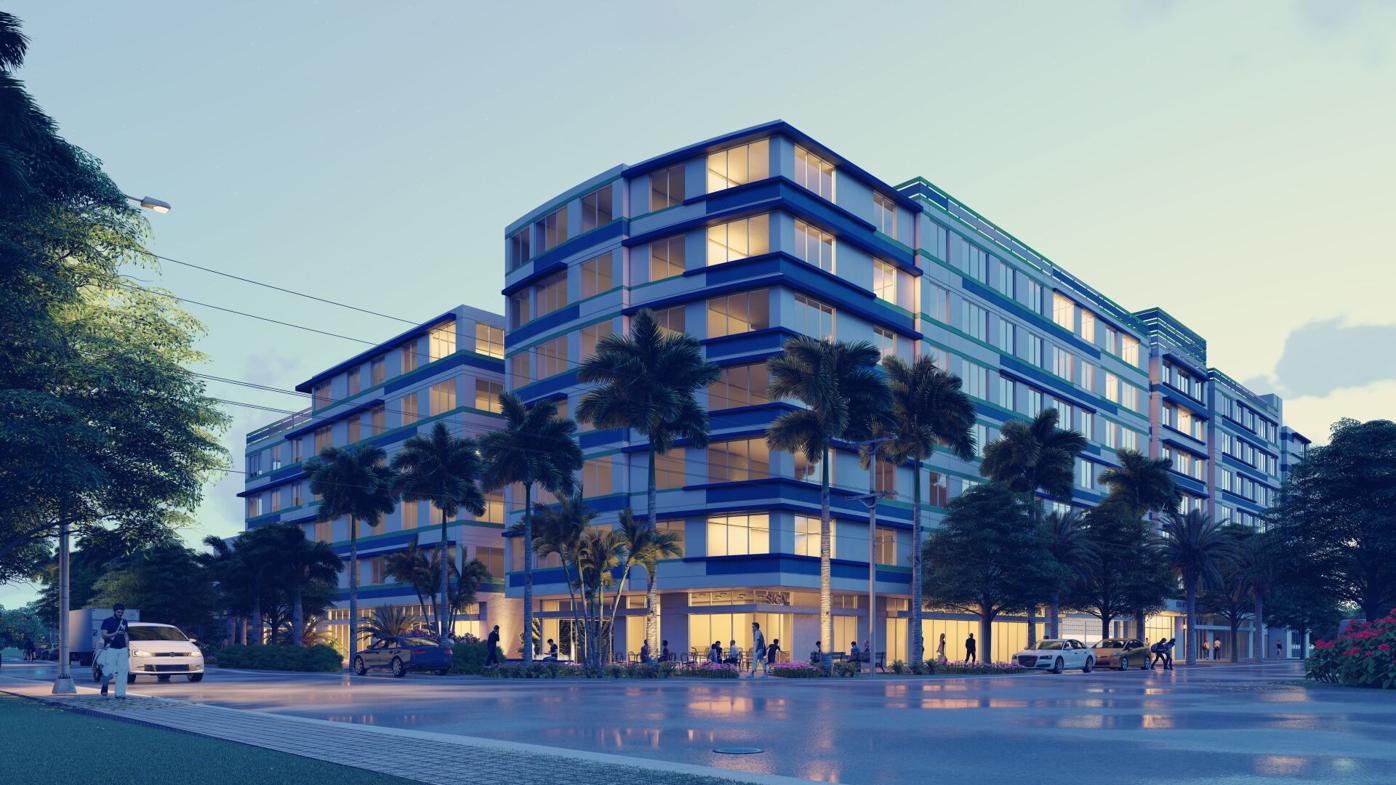 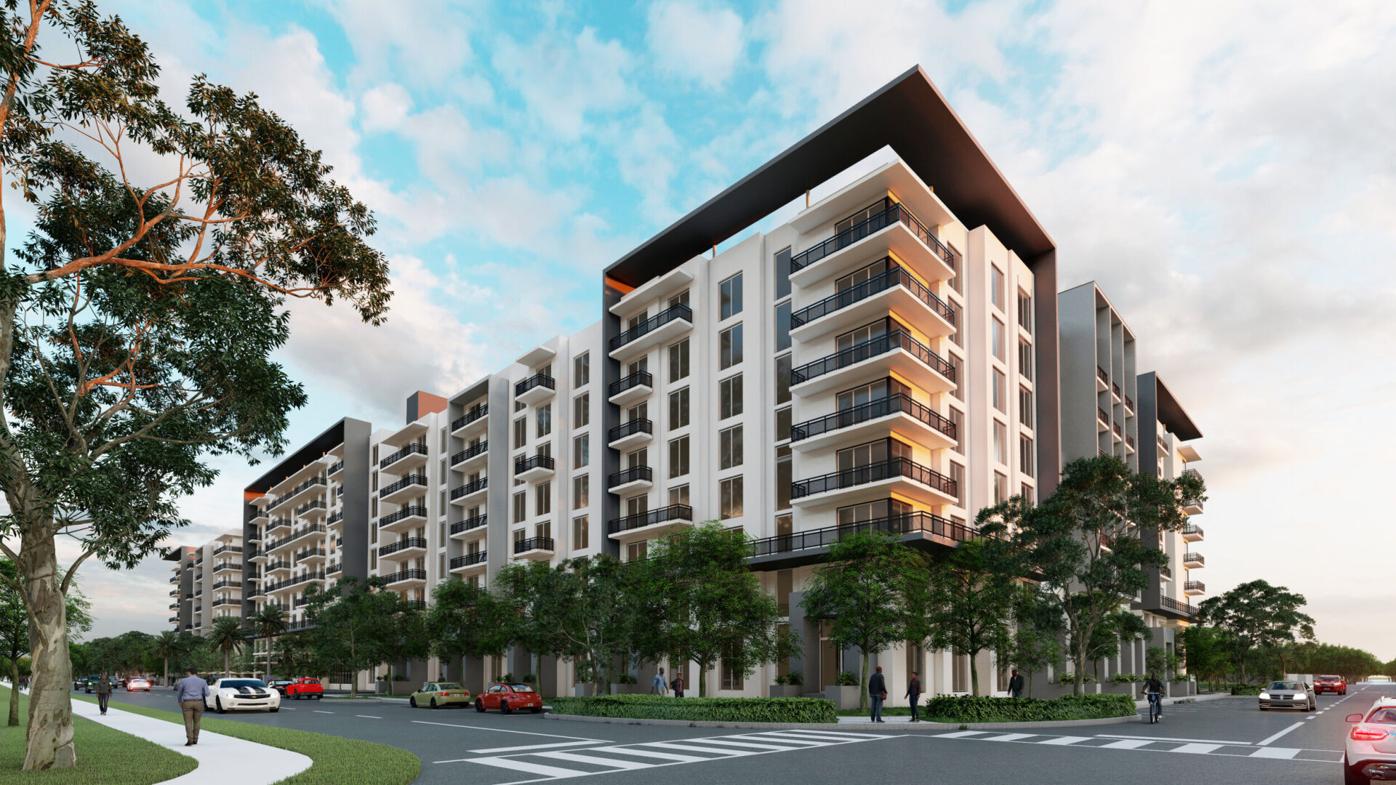 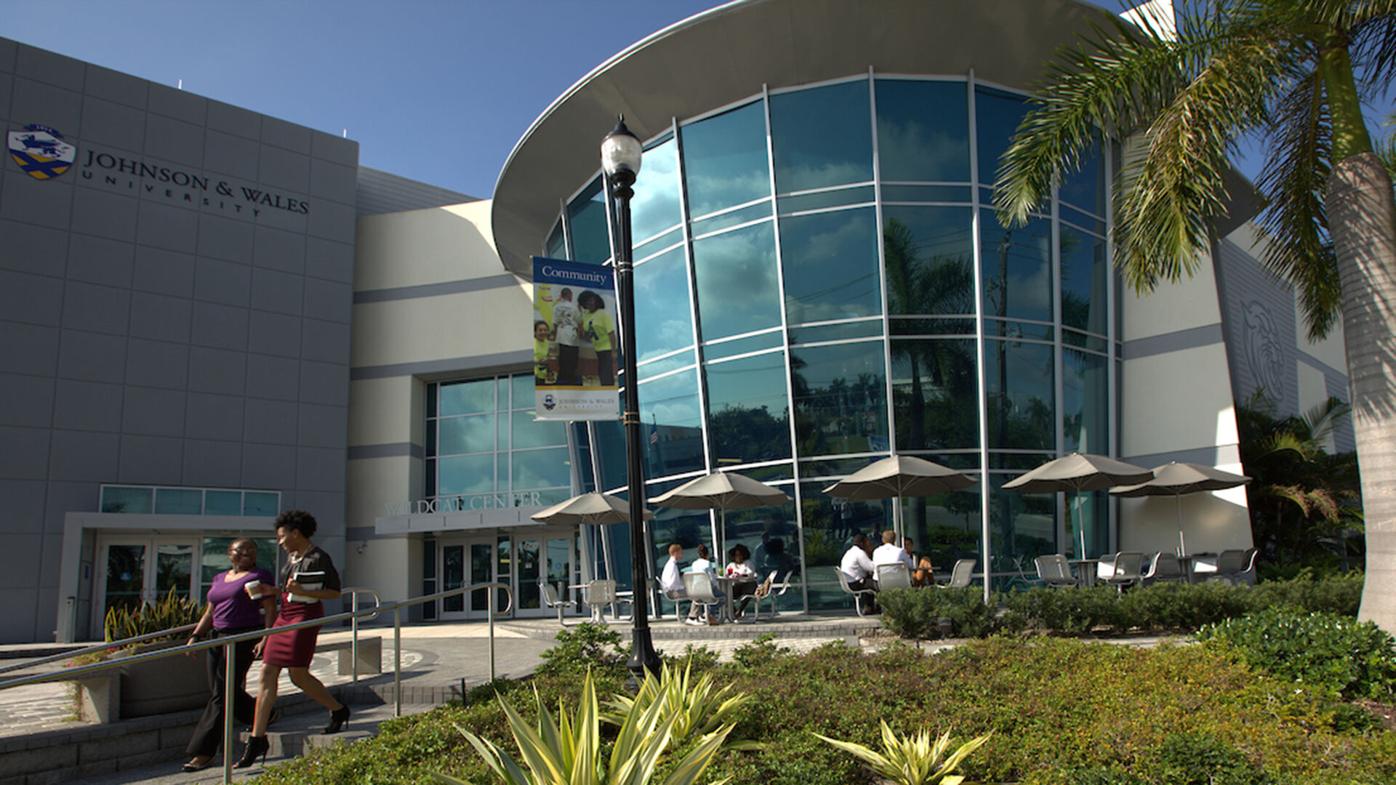 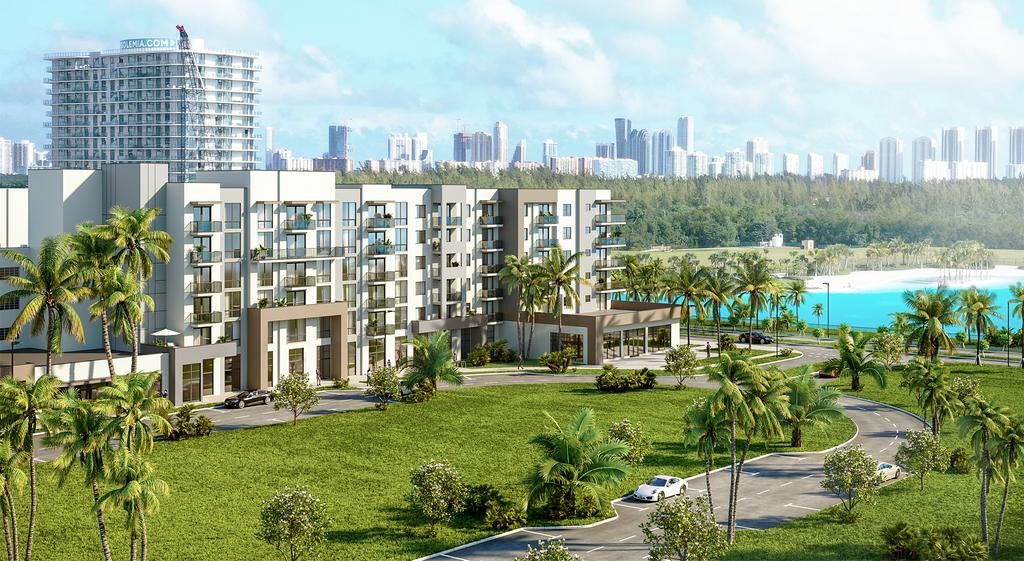 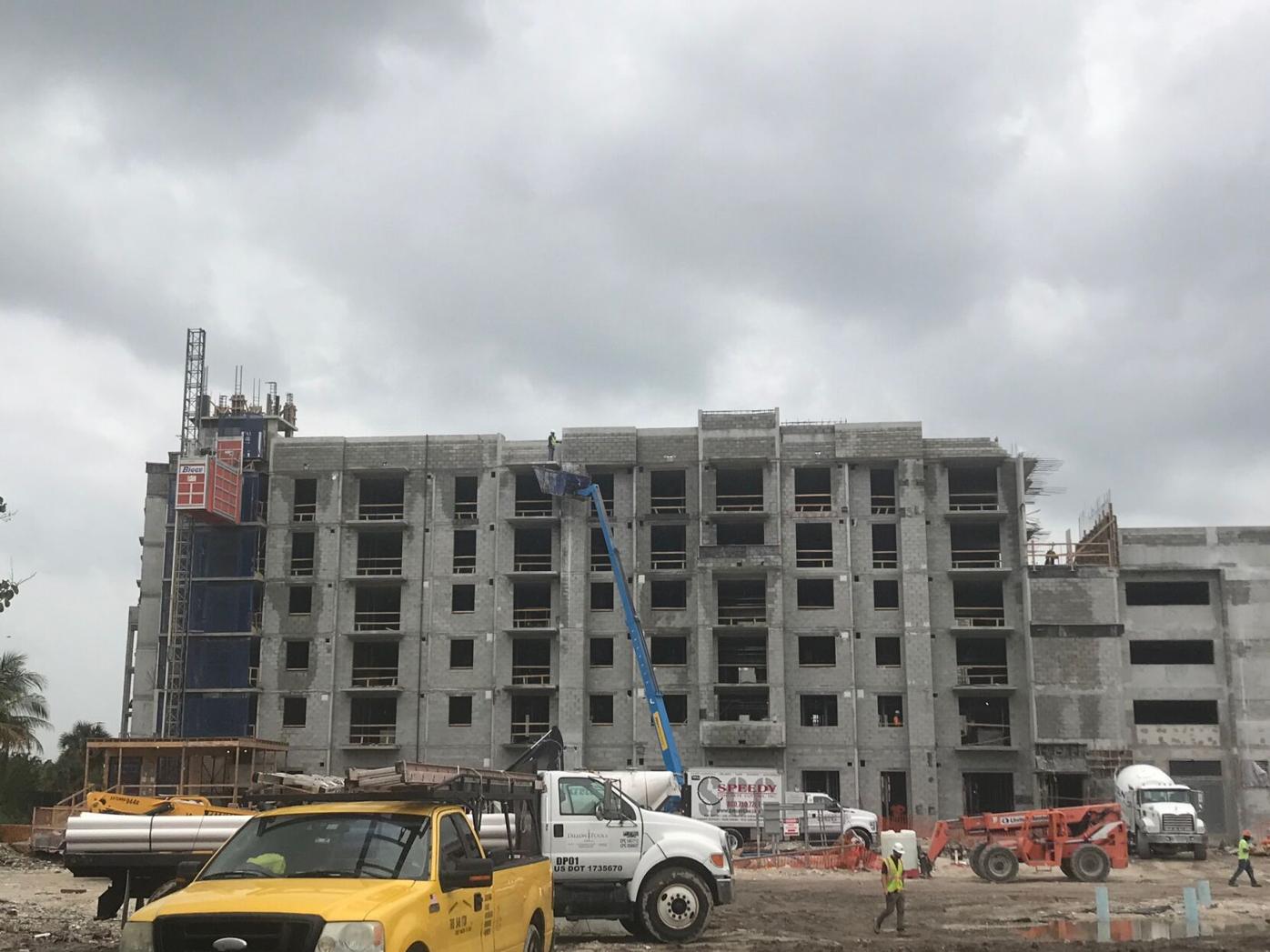 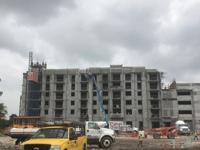 At long last, North Miami is ready for its close-up.

Before leaving office in 2019, former Mayor Smith Joseph called it the “city on the move,” but he was just a tad early. The big action was happening solely at the 184-acre, $4 billion Solé Mia project, which runs pretty much as a self-contained principality within North Miami’s boundaries. It includes the eye-popping seven-acre Laguna Solé, The Shoreline towers, Costco and the leviathan Warren Henry dealership. Otherwise, North Miami attracted dollar stores and storage warehouses.

The pent-up urge for development, dormant for 40 years, has reached a bursting point. If the economic winds prevail – and anything can happen these days – expect to see lots more construction cranes this decade, with an accent on multifamily housing, transit-centered development and a big makeover downtown.

Rentals lead the vanguard this time, in the wake of luxury condo developments that carried the re-cent development wave in neigh-boring North Miami Beach. These rentals range from “affordable” to high-end. At a time when land-lords are charging $1,300 a month for blighted one-bedrooms on NE 6th Avenue, it is little wonder that roughly half of Miami-Dade renters are struggling to stay put in one of the most rent-challenged communities in the nation.

Two towers with 377 apartments are well under construction at Solé Mia, just south of Costco behind Biscayne Commons, and will start welcoming tenants this fall, with a landscaped one-acre park and some retail space. Two miles south, nearly 300 units are going up with Causeway Village at 1850 NE 123rd St. Both projects will command upscale monthly rates, generally well north of $1,750.

But downtown North Miami is about to see two considerable projects provide a more affordable range of options. A 175-unit, six-story 55-plus and assisted living development is scheduled to break ground this fall at 950 NE 124th St., and by year’s end, the 369-unit Eleven55 NoMI project centered at 1155 NE 126th St. will start construction, with likely completion in 2023.

Soon to come are requests for proposals to develop the block just east of North Miami City Hall on NE 8th Avenue and 125th Street, including a multilevel parking garage and a vast array of rental units.

This is just the beginning of a significant makeover of vast swaths of North Miami along 125th Street, up the rail corridor west of Biscayne Boulevard, and through Solé Mia.

Perhaps the most seismic development is the sale of the 25-acre Johnson & Wales campus, which Property Management Group is said to be on the verge of acquiring for a price projected to exceed $55 million. That land is zoned as educational, so expect land use and zoning rethinking there. That will be among the most consequential real estate transactions in a long time, and will require smart moves by the city’s council and administration.

At 840 NE 130th St., a planned six-story, 67-unit condo project is surrounded by a chain-link fence and listed as going through city permitting. It sits directly across the street from single-family homes on the north side. It was scaled back from original plans, but still got plenty of resistance from residents – and revealed flaws in the city’s 2007 Neighborhood Overlay zoning program regarding development near downtown.

The grumbling doesn’t stop there, of course. Homeowners concerned about their peace and property values have called for greater setbacks or more modest heights on the 124th Street and 126th Street projects, and developers have at least partly accommodated them.

The city is galloping to move development along.

On April 13, the North Miami City Council voted 5-0 to approve giving local developer Jimmy Tate a lease on three acres at 1810 NE 146th St., a big step toward allowing him to build 350 rental units on the east side of NE 18th Avenue between 143rd and 146th Streets over the next two years.

Mayor Philippe Bien-Aime, a consistent champion of affordable housing, sponsored the motion, and Tate has contributed nearly $50,000 to Bien-Aime’s current reelection campaign. Businesses nearby objected to the plan, saying it would hurt their parking.

Bien-Aime did not respond to calls to comment, but District 1 Councilman Scott Galvin put it this way in an interview:

“I get that there’s resistance to this, but there is a lot of pent-up demand for residential in this area near a coming train station,” he said.

So consider Tate’s plan the first volley in a great wave of development roughly between the Bright-line rail tracks and NE 18th Avenue, and 143rd and 151st Streets.

There are qualifiers. South Florida’s boom-and-bust real estate cycles usually come with temptations of mania and depression. You can almost set a clock by it.

For the moment, however, interest rates and inflation remain relatively low, making the timing ripe for developers to make their moves.

“This is the perfect place for a flagship store, and North Miami can be a central location for blue-collar brands,” said Omega Investors partner Sebastien Scemla, referring to the forthcoming Payless Shoes corporate headquarters at 735 NE 125th St. and the flag-ship store that recently opened at 850 NE 125th St. The group is the developer behind Eleven55 NoMI and also owns Amaranthine Bistro and Sins Gastrobar in Miami Shores.

Zoning and land use changes instituted in recent years for down-town and the transit corridor have spurred interest. For that, Scemla specifically credits the council; Rasha Cameau, executive director of the North Miami Community Redevelopment Agency (CRA); and Tanya Wilson, the city’s director of planning, zoning and development.

For now, the CRA is the biggest game in town, with a $15 million budget destined to grow. It comprises 60% of North Miami’s land area and is designed to use tax-increment financing (TIF) from new development to relieve blight elsewhere. Income from Solé Mia and other developments such as Eleven55 NoMI will be used to improve areas in need and provide assistance. One big CRA project coming up: A parking ramp across from city hall with the eventual purpose of producing revenue to help the city pay its bills.

The Johnson & Wales property, largely outside the CRA zone, is the other big thing to watch. Once the tax-free educational zone is repurposed, rezoned and developed, the city’s diminished general fund could reap the rewards. Odds are high that North Miami will be a different place in five years.

Said Scemla: “Between the CRA and Johnson & Wales, this will be a win-win for the city.”

This proposed project is a six-story, 67-unit condominium building on the south side of a lot in a single-family residential neighborhood. It would be the first South Florida project for developer Oz and BF.

This massive eight-story, 369-unit development on the block between NE 11th and 12th Avenues and NE 126th and 127th Streets is scheduled to include plenty of amenities, with 10% of the units reserved for North Miami residents making 80% of the adjusted median income. One feature: A bike path to the Museum of Contemporary Art.