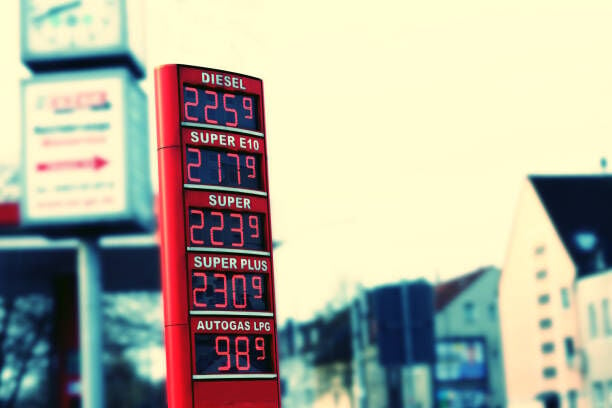 Gas prices are likely to keep lowering overall inflation in the coming months. 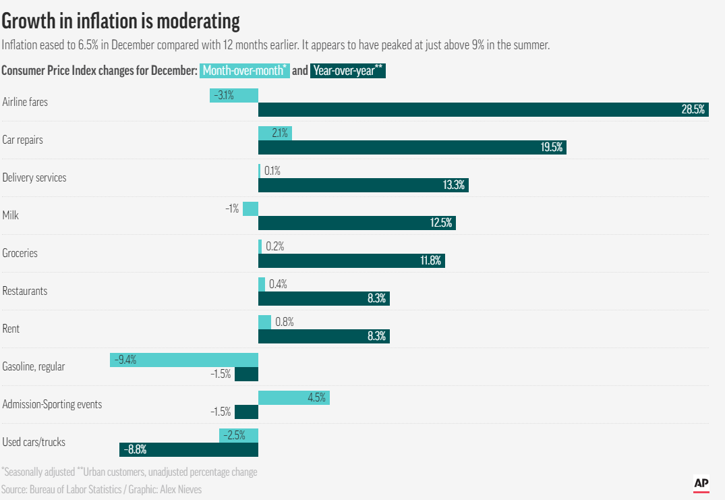 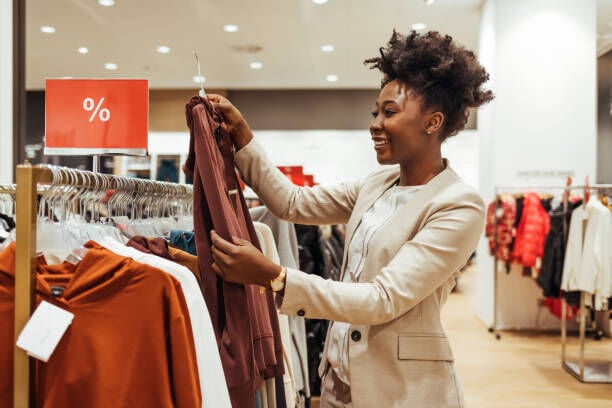 Inflation declined to 6.5% in December compared with a year earlier.

Rising U.S. consumer prices moderated again last month, bolstering hopes that inflation’s grip on the economy will continue to ease this year and possibly require less drastic action by the Federal Reserve to control it.

Inflation declined to 6.5% in December compared with a year earlier, the government said Thursday. It was the sixth straight year-over-year slowdown, down from 7.1% in November. On a monthly basis, prices actually slipped 0.1% from November to December, the first such drop since May 2020.

The softer readings add to growing signs that the worst inflation bout in four decades is steadily waning. Gas prices, which have tumbled, are likely to keep lowering overall inflation in the coming months. Supply chain snarls have largely unraveled. That’s helping reduce the cost of goods ranging from cars and shoes to furniture and sporting goods.

“This is the starting point for much better inflation rates, which should bolster consumer and business confidence,” said Joe Brusuelas, chief economist at tax consultants RSM.

December’s lower inflation reading makes it likelier that the Fed will slow its interest rate hikes in the coming months. The Fed may raise its benchmark rate by just a quarter-point at its next meeting, which ends Feb. 1, after a half-point increase in December and four three-quarter-point hikes before that.

Fed officials have signaled that they intend to boost their key rate above 5% – a move that would likely keep mortgage rates high, along with the costs of auto loans and business borrowing. The Fed’s higher rates are intended to slow spending, cool the economy and curb inflation.

But if inflation continues to ease, the Fed could suspend its rate hikes after that, some economists say, or implement just one additional hike in March and then pause. Futures prices show that investors expect the Fed to then cut rates by year’s end, although minutes from its December meeting noted that none of the 19 policymakers foresee any rate cuts this year.

“If actual inflation is trending downward, the Fed can take more comfort that it’s landed the economy in a good place,” said Daleep Singh, chief global economist at PGIM Fixed Income and a former Fed staffer. Singh expects the Fed to raise its benchmark rate by a quarter-point at each of its next two meetings and then stop with its key rate just below 5%.

In remarks last week, President Joe Biden suggested that the “data is clear” that U.S. inflation is dropping.

“It’s coming down in America month after month, giving families some real breathing room,” he said.

Biden is increasingly framing the economic challenge of inflation in political terms: He warned that House Republicans could worsen inflation and inequality with their bills to reduce IRS funding and even eliminate the tax agency and instead levy a national sales tax that would disproportionately hit the middle class.

Excluding volatile food and energy costs, so-called core prices rose 5.7% in December from a year earlier, slower than 6% in November. From November to December, core prices increased just 0.3%, after rising 0.2% in November. In the past three months, core inflation has slowed to an annual rate of just 3.1%.

Even as inflation gradually slows, it remains a painful reality for many Americans, especially with such necessities as food, energy and rents having soared over the past 18 months.

Grocery prices rose 0.2% from November to December, the smallest such increase in nearly two years. Still, those prices are up 11.8% from a year ago.

Behind much of the decline in overall inflation are falling gas prices. The national average price of a gallon of gas has sunk from a $5 in June to $3.27 as of last Wednesday, according to AAA.

Also contributing to the slowdown are used car prices, which fell for a sixth straight month in December. New car prices declined, too. The cost of airline tickets also dropped.

Still, for most Americans, the Fed’s rate hikes have made auto loans much more expensive, thereby negating most of the benefit to consumers from the drop in used-car prices.

“The good news is prices are down, the bad news is that rates are up, and that is driving people away,” Schrier said.

He estimated that auto loan rates have risen by 4-5 percentage points in the past year.

Most economists predict that inflation will continue easing in the coming months, driven down by cheaper gasoline and factory goods.

Housing costs are still surging, with apartment rental costs jumping 0.8% from November to December and 8.3% compared with a year earlier. The year-over-year increase was the fastest in four decades.

But real-time measures of new leases tracked by real estate data firms like Zillow and Apartment List show that rental price increases are slowing. As a result, the government’s measure of rents, which lag behind private measures, should start to decline later this year.

What the Feds are watching

Fed Chair Jerome Powell is focused, in particular, on the cost of services excluding housing. Price increases in this category can take longer to fade, because they’re heavily driven by labor-intensive sectors like restaurants, hotels, health care and education. Wages in most of those industries have been accelerating, which can spur inflation if employers then charge more to cover their higher labor costs.

In December, services prices excluding housing rose 0.3%, down from average monthly increases of about 0.5% this year. But they’re falling only slowly: Services prices are still up 6.2% from a year ago, off only slightly from a recent peak of 6.5%.

Many economists expect inflation to fall to roughly 3% or 4% later this year, though it could plateau at that level if services prices remain high. Fed officials may choose to keep their key rate above 5% until inflation gets closer to its 2% target.

Fed officials, for their part, have signaled that they intend to keep their key rate that high all year.

Last week’s jobs report for December bolstered the possibility that a recession could be avoided. Even after the Fed’s seven rate hikes last year and with inflation still high, employers added a solid 223,000 jobs in December, and the unemployment rate fell to 3.5%, matching the lowest level in 53 years.

At the same time, average hourly pay growth slowed, which should lessen pressure on companies to raise prices to cover their higher labor costs.

“The evidence that the U.S. economy may skirt recession is mounting,” Singh said.