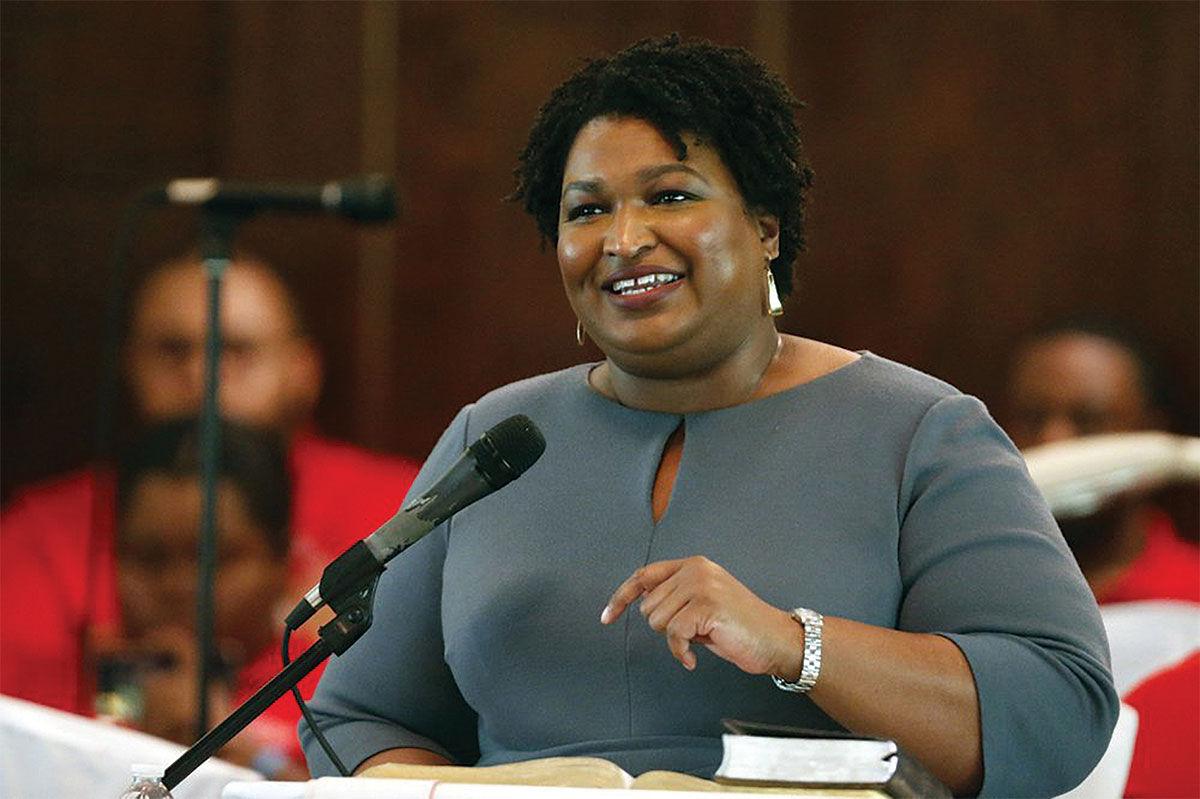 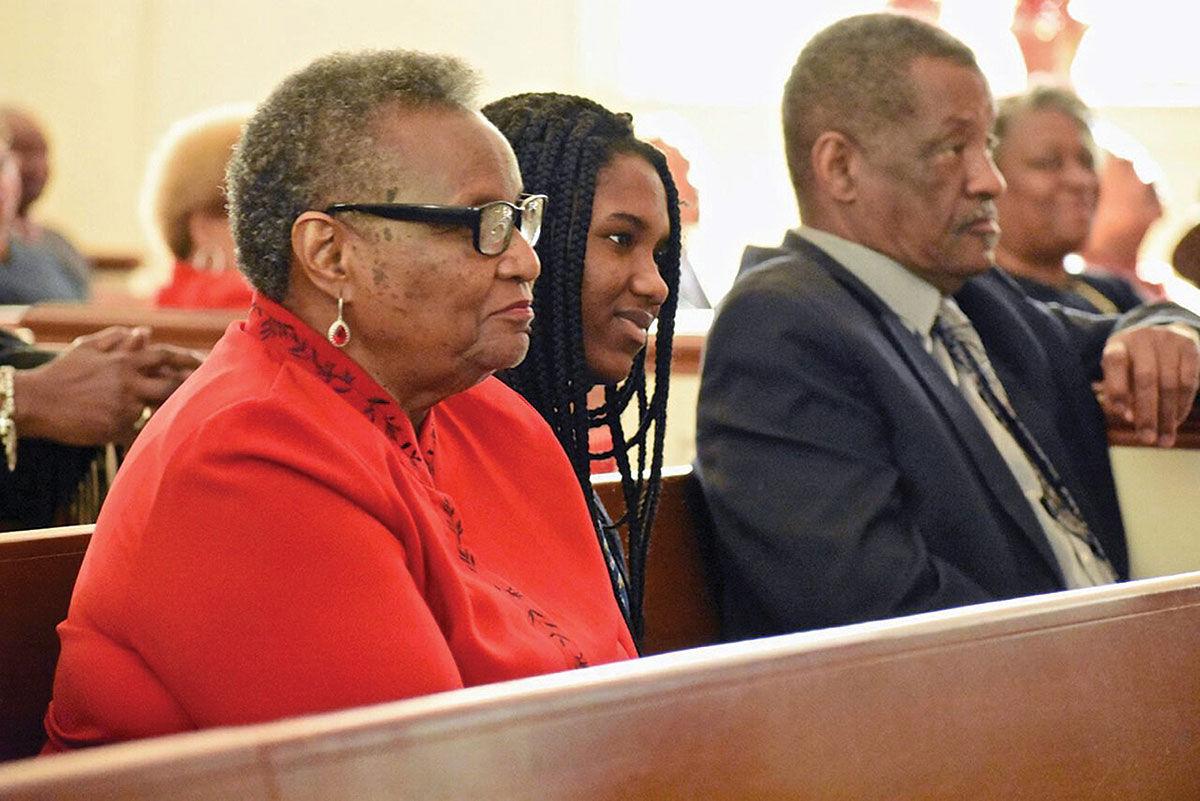 Jeanine Abrams McLean, a former biologist at the Centers for Disease Control and Prevention who now helps her sister run the census advocacy group Fair Count, also took advantage of Georgia’s early voting, wearing her “Come to Your Census” T-shirt to her polling place in Tucker.

In an interview with Religion News Service, Stacey Abrams called it a coincidence that the siblings had cast their votes on the same day. The family’s pastor, the Rev. Ralph Thompson, said voting is ingrained in the Abramses.

“The family is just a tight-knit cadre of people who understand that it is incumbent upon them to vote and to make a difference,” he said.

Thompson, whose predominantly Black Columbia Drive United Methodist Church in Decatur, Georgia, has a sign outside that says “Vote Early,” said the entire family has long viewed voting as “a sacred civil duty.”

When Abrams, 46, threw herself into her twin causes of protecting the right to vote and being counted in the census, most news stories attributed her efforts to her loss in the gubernatorial election by 50,000 votes to Brian Kemp, the state’s top elections official at the time.

Abrams, charging that Kemp suppressed votes, announced the formation of her voter access organization, Fair Fight, in her concession speech, along with her intention to sue Kemp for running what she alleged was an unfair election. (The suit is ongoing.)

But Abrams also connects voter protection and other civic activism to her family’s faith.

“My faith is central to the work that I do, in that I not only hold Christian values, but my faith tradition as a Methodist tells me that the most profound demonstration of our faith is service,” said Abrams.

Abrams and her siblings were raised by two United Methodist clergy, the Rev. Robert Abrams and the Rev. Carolyn Abrams, both now retired. Their parents trained them early in service, bringing them to work at soup kitchens and to boycott a local Shell gas station to protest its corporate owner’s connections to apartheid-era South Africa. McLean was an acolyte, or altar server, and Stacey Abrams said she “did double duty” as an usher and a choir member in the small church her family attended at the time.

“You look at Stacey, who’s doing public service with all of her advocacy,” said McLean, 38. “You look at Fair Count and the work that I’ve been able to do here, but even public service working in public health: My siblings are all doing some sort of work that has an impact on people’s lives because that’s just the way that we were taught. ... The first place we learned to do that was in the church.”

The family has continued to pursue its commitment to public service through the church, using faith as a motivator to be engaged in politics.

“I was raised to not only think about my faith as an activity, but to translate that into how I engage community,” said Abrams.

Earlier this year, Fair Count provided a “faith app” to dozens of congregations to help clergy text their members with census and church information. McLean envisions faith leaders encouraging congregants to get involved when new maps for redistricting are reviewed in their communities.

Apps that can be used on mobile phones make such information more accessible to disadvantaged communities, where cell phones are more widely available than broadband-dependent devices.

“What we’re trying to do is provide these resources, not only to help to make sure that there is long-term power building in faith communities in these vulnerable areas,” McLean said, “but also to just give people a lifeline so that they can continue to reach out and stay connected with their members.”

Getting out the vote

McLean worships at Thompson’s Columbia Drive Church in Decatur, along with her husband and two children and Robert and Carolyn Abrams. Stacey Abrams attends when her schedule allows and has been a speaker for special events and obliges her pastor’s impromptu invitations to make remarks.

All but Gardner joined McLean, Stacey Abrams and their parents on a Facebook “Abrams Family Reunion” as Fair Count held a virtual event to highlight census participation in the Magnolia State where they were raised.

Voting activism and the Black church have long been mutually reinforcing, as churches historically provided a protected space to discuss politics and organize drives. The family has been that for the Abramses as well.

In a January speech to law students at Chapman University in California, Gardner recalled her grandmother’s story of being taught at her Mississippi church how to pass a written poll test, only to be refused the vote because she didn’t get the “right” answer when asked how many bubbles there were in a bar of soap.

“She told me she made sure once she finally got the right to vote that she exercised it on every occasion,” Gardner said. “As we celebrate the progress we’ve made, we must remain resolute to continue the fight for equal rights and equal justice under the law.”

The Abramses are helping to expand the focus on the vote to other areas they say are equally empowering.

“There are three pillars of democracy – the census, voting and redistricting – and we want to make sure that communities that have been left out of all three of these conversations have their voices heard from now and into the future,” said McLean in an interview.

“I evaluated the census the same way I did the right to vote or the right to read,” said Robert Abrams on the Facebook event, sitting next to his wife. “Anything that anyone worked so hard to keep from you must be good.”

Perhaps the most important link between Abrams and her church background, however, has been the resilience it has granted her to come back from seemingly overwhelming setbacks. The latest came Tuesday, when the Supreme Court decision ended the extended census count, a decision McLean called “jarring.”

“I hope my witness is always seen as one of perseverance,” said Abrams. “I may not have been the governor, but that didn’t absolve me of the responsibility that my faith tells me I hold, which is to ensure that the marginalized, the voiceless, the disadvantaged, are able to be heard and to be served.”

Religious messages have been a part of Abrams’ campaigns dating at least to her run for governor, when her “Boundless Belief ” ad featured her recollections of the Saturdays of service observed in her parents’ home as a child and included footage of her holding hands around a dinner table with family members as an adult.

Speaking earlier this year at Brown Chapel African Methodist Episcopal Church in Selma, Alabama, Abrams referred to the biblical book of Isaiah’s discussion of faithful endurance when she spoke of civil rights marchers who fought and bled for the right to vote on Bloody Sunday in 1965.

“I’m the product of the Voting Rights Act, an act that was bought and paid for on Edmund Pettus Bridge with foot soldiers who had believed that they had the right to be there,” she said in footage of the event in “All In: The Fight for Democracy,” a 2020 documentary about barriers to voting.

“They stood up and they crossed the bridge. Those were the wings of the eagles that Isaiah talked about. It may have looked like feet crossing the bridge but that was flight.”

Political scientist Andra Gillespie at Emory University in Atlanta said it’s not unusual for Black politicians like Abrams to include faith in voter mobilization work. But her deep experience in congregational life gives Abrams a level of familiarity to draw on more than a few oft-heard Bible verses.

“She’s not going to go to the same places that everybody usually goes to because they only know a handful of Scripture,” said Gillespie, an expert on African Americans and politics. “She’s been around church her whole life, so, yeah, she’s fluent in the Bible.”

Abrams said she’s going to keep up her message despite the disappointments along the way.

“In this country, democracy is how we speak to those in power and how we determine who holds power,” she said. “And that’s my mission.”