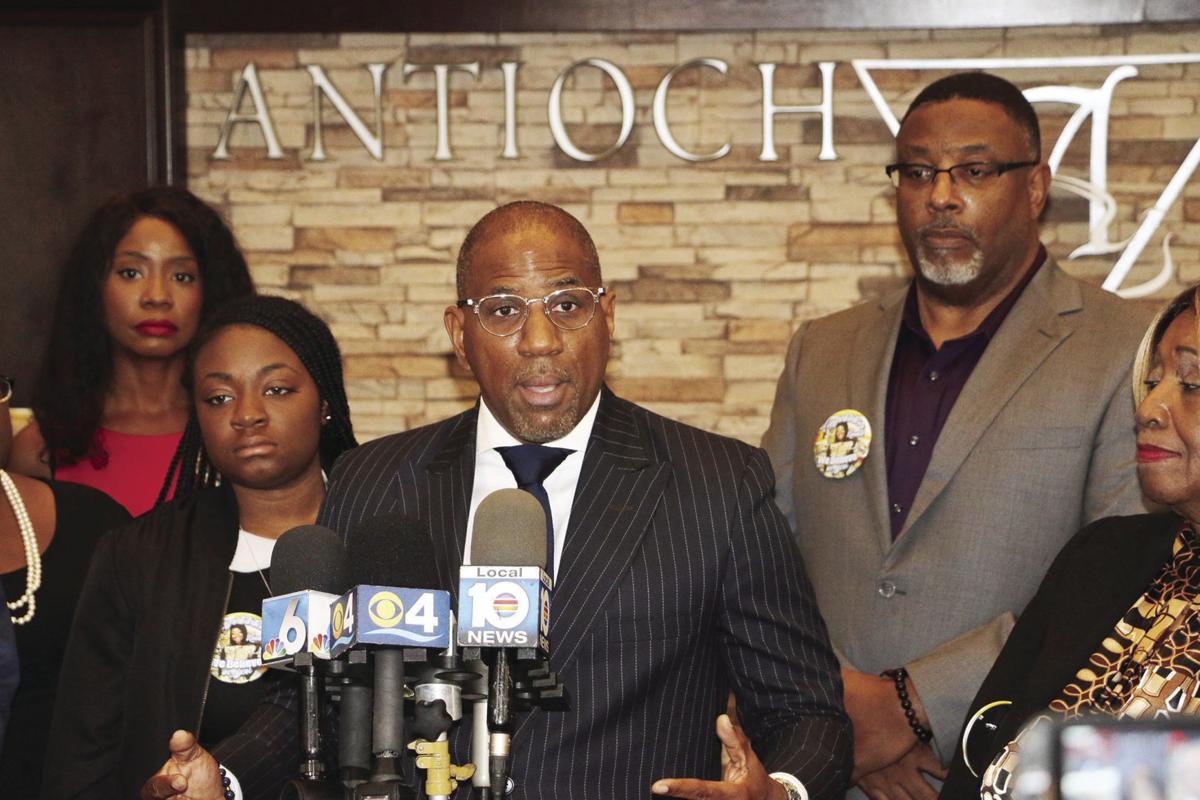 Kamilah Campbell claims she did not cheat during her October SAT test, as her attorney, Benjamin Crump, and school board member, Steve Gallon, stand beside her. 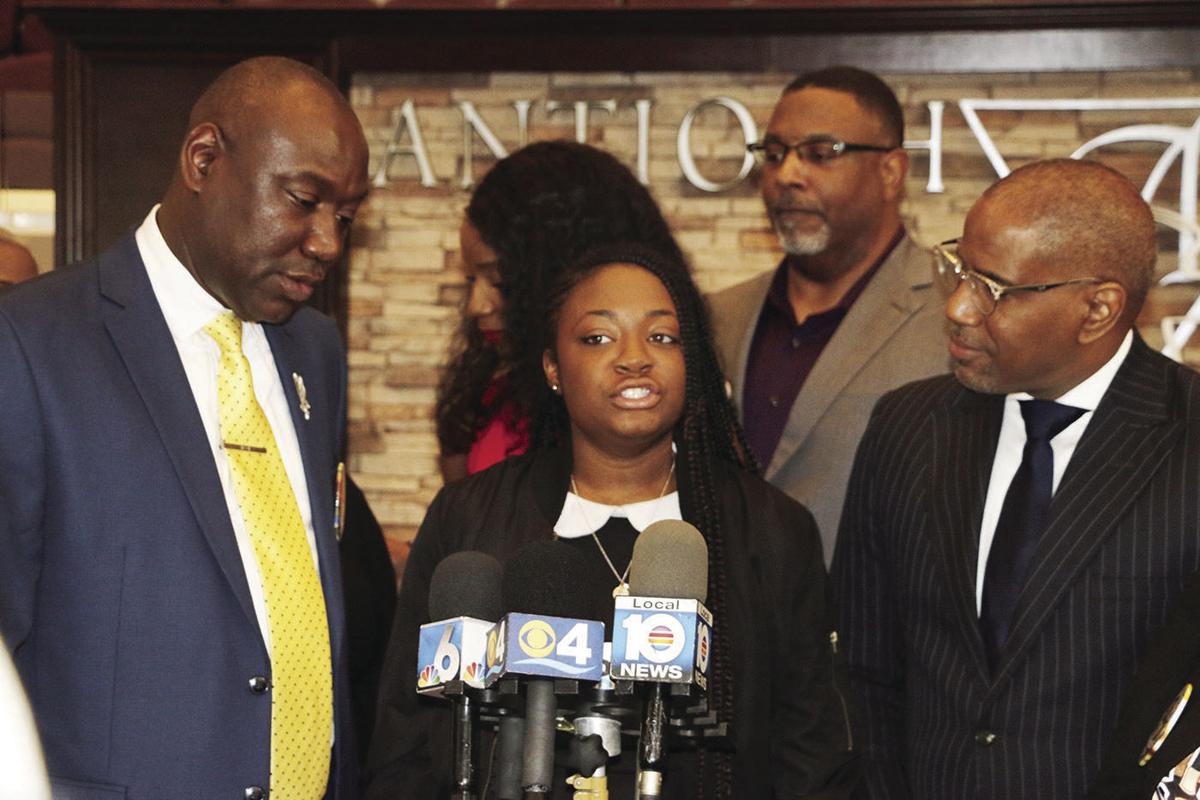 School board member shows solidarity for Kamilah Campbell during a press conference.

Kamilah Campbell claims she did not cheat during her October SAT test, as her attorney, Benjamin Crump, and school board member, Steve Gallon, stand beside her.

School board member shows solidarity for Kamilah Campbell during a press conference.

After Kamilah Campbell’s October SAT score was flagged because she retook and improved her score, a school board member wants to review what procedures are in place for students whose scores are withheld by a testing service.

After Campbell’s story received national coverage, Miami-Dade County Public Schools board member Steve Gallon received several calls from concerned parents whose children’s college entrance examination test scores were withheld due solely to improved academic scores. As a result, Gallon is proposing an item which seeks to address instances of flagged college entrance examination test scores due to improved academic performance and what possible solutions exist for students who are in such a situation.

Gallon sponsored an item that calls for the review of instances of flagging or withholding of college entrance exams of county students due solely to improved test scores. The item seeks to gather data regarding students affected by flagged test scores based on academic improvement, continue dialogue with the College Board, and other college entrance examination entities regarding this matter, and start an informational campaign for students and parents who find themselves in a similar situation.

“The initial phase of the item asked to examine the issue,” Gallon told The Miami Times. “It is an issue that has been out there but affecting students that are in our system.”

The review and quantification of flagged test scores due to academic improvement will be inclusive of all demographic subgroups, reads Gallon’s proposed action for the item.

The call to review such instances comes two weeks after Campbell, a Dr. Michael M. Krop senior, announced that Educational Testing Service flagged her October SAT test score and is accusing her of having prior knowledge of the test. Campbell’s official SAT scores have yet to be released, delaying her college admissions process, as well as possibly costing her thousands in financial aid and scholarships.

The Educational Testing Service works in tandem with the College Board, which owns the SAT, to administer the SAT and provide test security during the examination.

The testing service gave Campbell the option to forfeit her current test scores, retake the test, or take her case to arbitration. Campbell chose to take her case to arbitration. Many students opt not to fight instances of flagged scores based on test score improvement due to the unfair manner in which the Educational Testing Service handles the process.

Campbell’s story received national attention after she hired famed civil rights attorney, Benjamin Crump, to represent her case against the Educational Testing Service. Crump criticized the testing service for putting the burden of proof on Campbell, instead of being forthcoming with evidence of her alleged cheating. Additionally, the Educational Testing Service and the College Board were criticized for their lack of due process and the lengthy delays associated with arbitration.

“Accused students must prove their innocence by surmounting a series of extra-judicial hurdles,” said Bob Schaeffer of the National Center for Fair and Open Testing. “The testing company serves as police, prosecutor, judge, jury, appeals court and executioner.”

After Campbell’s news went national, many students who have been affected by flagged scores due to improvement came forth with their own stories of unjust treatment by testing officials, Gallon said.

“This is not an isolated incident,” said Gallon, who represents District 1. “I received many calls from parents and families that did not know how to navigate the bureaucracy and did not know their rights to due process.”

The item, which received unanimous support in a committee meeting Monday, also seeks to work with entities that manage college entrance examinations to review these matters and ways to achieve resolutions. The item also seeks to provide information on the process of reporting and responding to the flagging of test scores due to improvement.

“There’s an opportunity for the College Board to be more aggressive in its dissemination of information regarding the process for appeal and the availability of the options during an appeal,” Superintendent Alberto Carvalho said at the committee meeting. “I don't think there is a great deal of emphasis on that.”

In another item, Gallon wants a review of the school system’s College Assistance Program, which currently is underserved in almost half of the county’s high schools.

The school board will review both items at its upcoming regular meeting on Wednesday.

Student and parents use College Assistance Program to navigate through the college transition process. Gallon wants to review the implementation of the College Assistance Program and the availability of staff running that program, commonly known as CAP advisors. The item addresses making budget and policy recommendations aimed at increasing the number of CAP advisors for the 2019-2020 school year.

“This is the person whose sole job is dedicated to supporting students with college applications and scholarships and the overall college preparation and transitional process,” Gallon said.

Following the Great Recession of 2008, the CAP advisors position was decentralized, giving individual high schools the discretion to implement the position or budget for other needs.

Some schools have a CAP advisor on site. At other schools, the guidance counselors took the role of advising students in matters related to the college admissions process on top of their current workload. In some schools, the position was eliminated altogether.

At present, it is estimated that some 44 percent of high schools do not have a CAP advisor, the superintendent said on Monday. More than 10 years after the recession, the school system may look into taking the flexibility that was extended in 2008 away from the school sites, Carvalho said. “The time is right for us to look at it,” he said.

Both of Gallon’s items were co-sponsored by several school board members and received unanimous support by the school board.