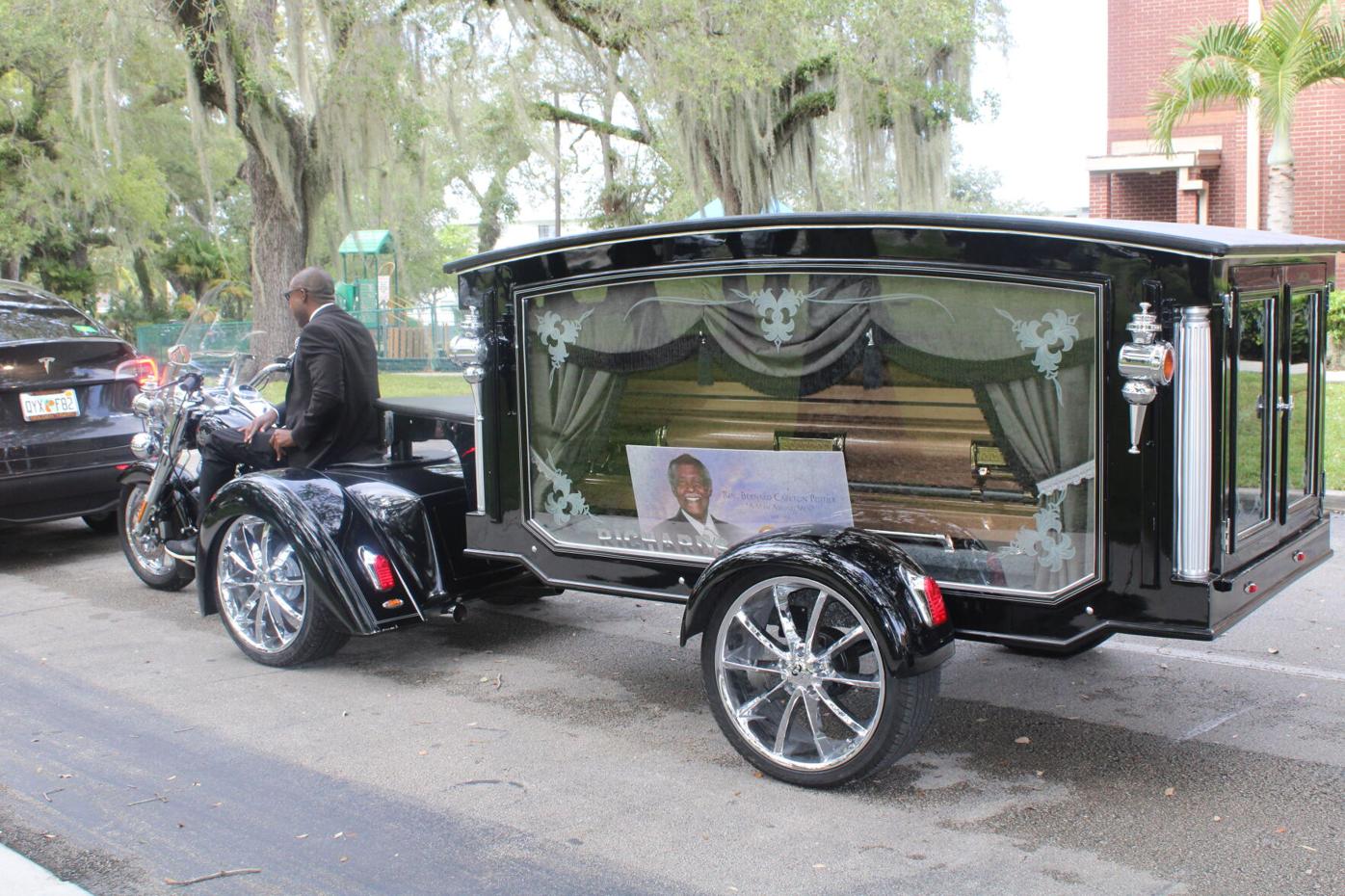 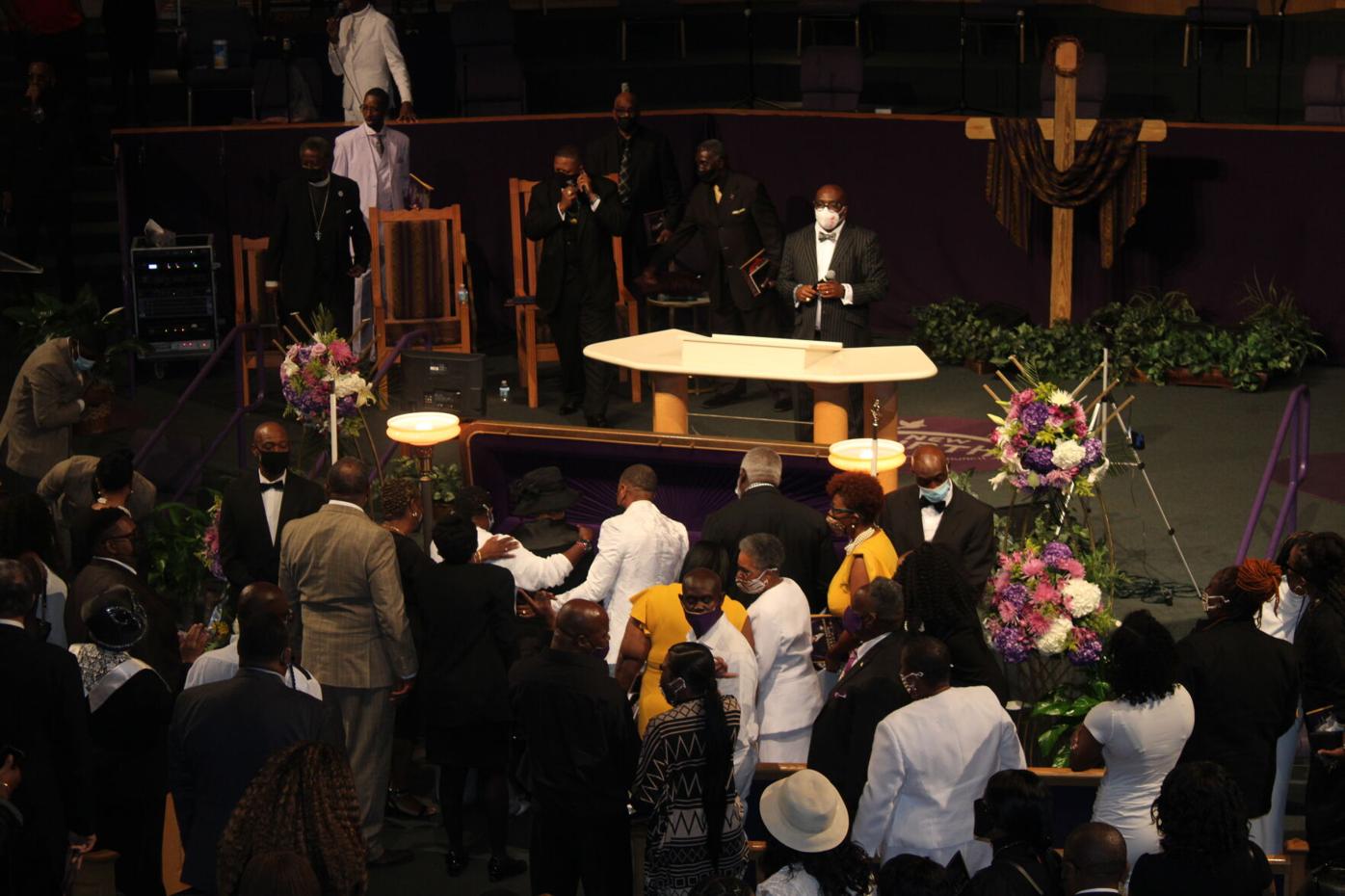 Friends and family of Bernard Poitier Sr. gather in front of his casket for a final viewing at New Birth Baptist Church. 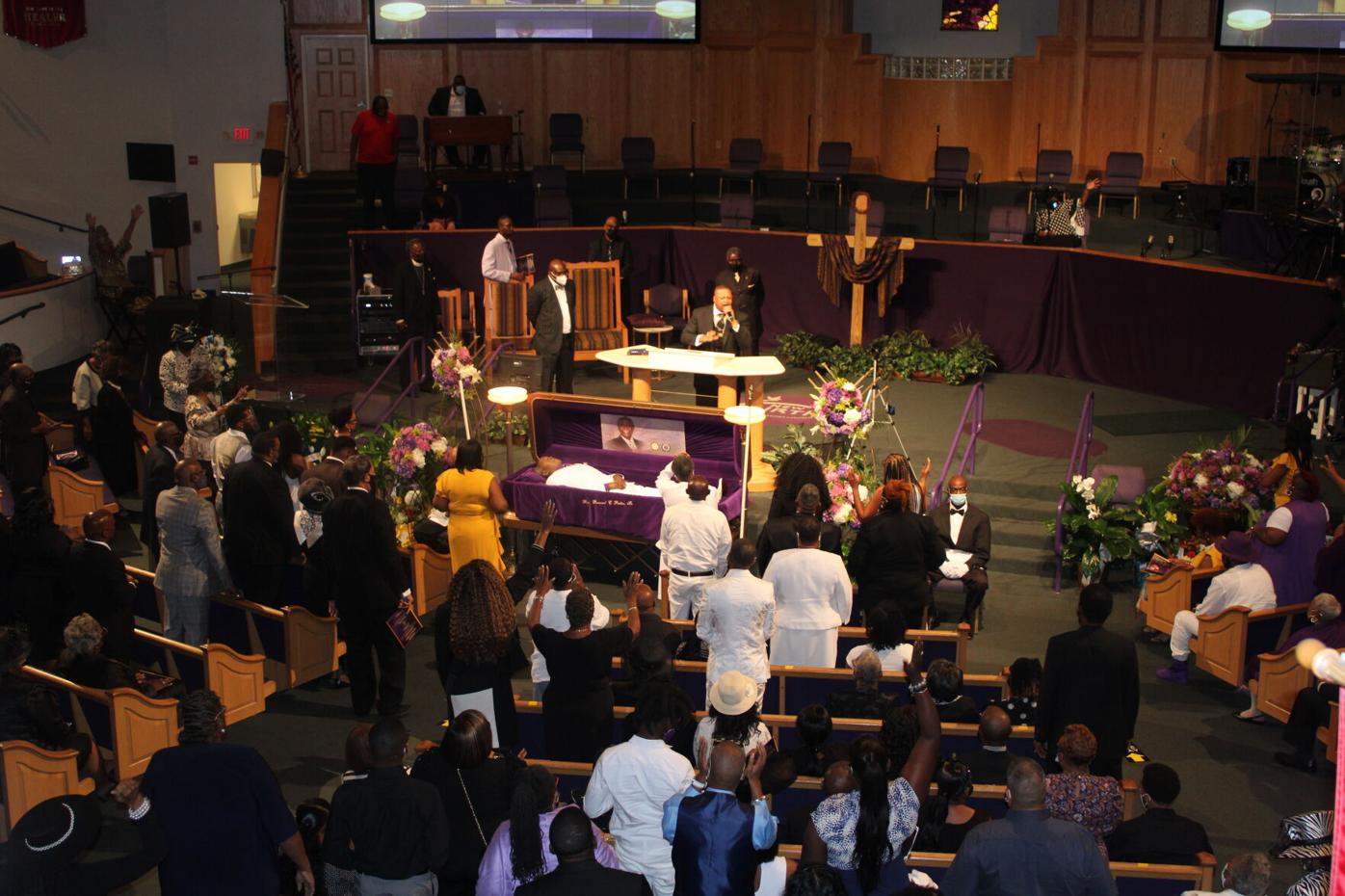 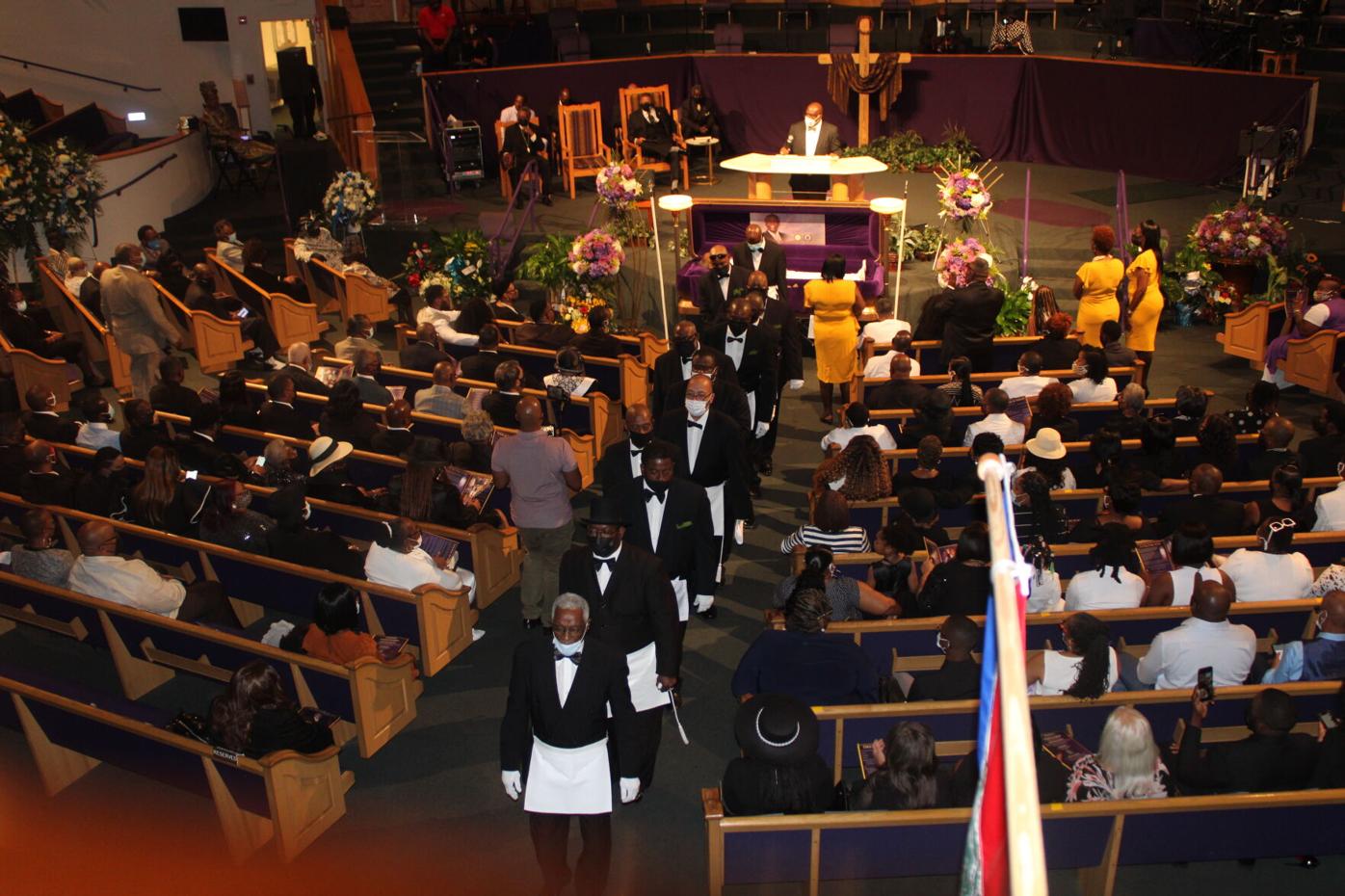 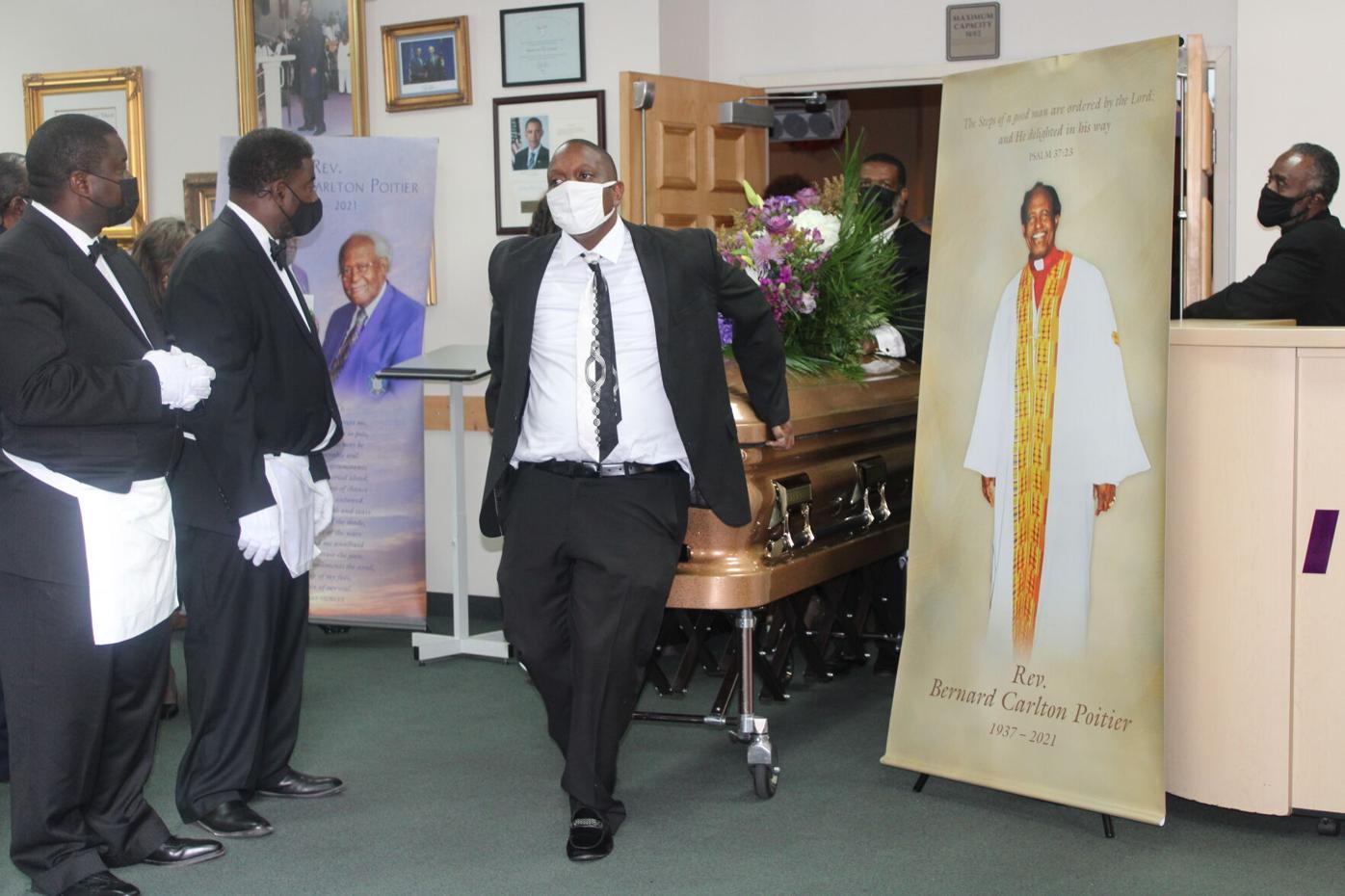 Rev. Bernard Carlton Poitier Sr., a man friends and family say possessed a heart of gold, was given a homegoing ceremony fit for a prince last Friday.

For decades, the founder and former proprietor of the Poitier Funeral Home devoted time, energy and even money to the beloved communities in Miami he cared so much about.

His years of service did not go unnoticed, as hundreds of people gathered at New Birth Baptist Church in Opa-locka to honor his legacy and celebrate a life many say was well lived.

A procession of brothers from the Freemasonry Grand Lodge performed last rites for their departed brother while walking to the tune of Bernice Johnson Reagon’s “We Are Climbing Jacob’s Ladder.” The intimate ceremony was themed in colors representing Poitier’s Omega Psi Phi Fraternity.

Born in 1937, the Miami native and nephew of Bahamian actor Sidney Poitier was one of Cyril and Albertha Poitier’s 10 children. A product of the Miami-Dade Public School system, it was only fitting for him to begin his career as an M-DCPS educator at Charles R. Drew Middle School after receiving his Bachelor of Science degree from Bethune-Cookman University, formerly Bethune-Cookman College.

Poitier’s educational journey at the Atlanta School of Mortuary Science and Miami-Dade College led him on a path to the funeral service business. He became a licensed embalmer and funeral director more than 50 years ago.

That was where Poitier left his legacy.

“My dad was probably the best at what he did,” said Valencia N. Poitier Esq., one of Poitier’s five children. “There were a lot of newcomers in the industry who looked up to him, saw him as a mentor and admired his work ethic. He would work late into the night if he needed to. His whole thing was ‘You don’t sleep until the job is done and until it is done right.’”

One of Poitier’s most notable acts was offering pro bono burial services and discounted rates for families who experienced financial difficulties. When the quest of more than a dozen Haitian migrants attempting to seek U.S. asylum ended in tragedy, Poitier offered to conduct the memorial services for their families free of charge.

“I’m not sure how rare this was in the funeral industry but for him, it was extremely common to do something like that,” said Valencia Poitier. “Part of his willingness to serve the community meant that he would do what people coming through the doors needed him to do. It wasn’t about the money.”

“He didn’t just love his own family or kids but he loved and tried his best to do for anybody that needed,” added Poitier’s son. “He never turned anyone down whenever he had an opportunity to help. It wasn’t about being a man in business, he was a man that achieved his goal and used it to give back to the community. He was my hero.”

Taylor recalls sitting in a chapel boxing up dresses his father bought to distribute to little girls in the community. He also bought suits for young boys.

At Thanksgiving time, truckloads of food, paid for by Poitier and his wife, Barbara, would make their way to families in need. Around Christmas, Valencia Poitier would be tasked with picking out the best toys for donation. The holiday giveaway tradition continued until she went off to college.

“We worked together to get into good trouble,” said Valencia Poitier during her remarks at the funeral, explaining how her father encouraged her to adopt some of his invaluable traits.

His contributions, though, didn’t stop there. He shared his livelihood with everyone.

On several occasions, Poitier would help put students through his alma mater, whether it was assisting with their tuition or the college application process, expecting nothing in return. Sometimes he would donate money for children to get their hair done.

“There were times where someone would call him to say that their house was going into foreclosure, and he would drop everything to meet them at the bank,” said Valencia Poitier. “He gave without measure.”

Poitier’s willingness to extend a helping hand to those in need is largely the result of his faith. He was an ordained minister in the African Methodist Episcopal (AME) Church and founder of the St. Luke Cousin Memorial AME Church in Miami. Despite retiring from ministry, he continued to spread messages of hope and encouragement to those around him.

“A lot of my success ties to the support and encouragement that Mr. Poitier gave [me] back then,” said District 109 Rep. James Bush III, who credits Poitier for helping him get elected into office 14 years ago.

Bush says he fought consistently to have Poitier’s legacy honored in the county prior to his death.

“I loved Mr. Poitier and it’s just so unfortunate that (with) all of the naming of streets and buildings after so many people – not that I’m taking away from those who earned it – that here in our county, there’s nothing named after [him],” Bush lamented.

“One thing about Bernard Poitier, if he didn’t sow into your life one way, he sowed into your life another,” said Pastor Bobby Brown, a relative of Poitier’s, at the service. “We have lost a great man, in this city, in the funeral industry and in life.”

Though the Poitier Funeral Home was taken over almost a decade ago , Poitier continued to touch the lives of people he came across while working at another funeral home — Richardson Mortuary. Richardson handled the arrangements for Poitier and laid him to rest at the Our Lady of Mercy Cemetery.

“The man,” said Dwight Jackson Sr., funeral director at Richardson Mortuary, “was an icon in Florida and around the country.”