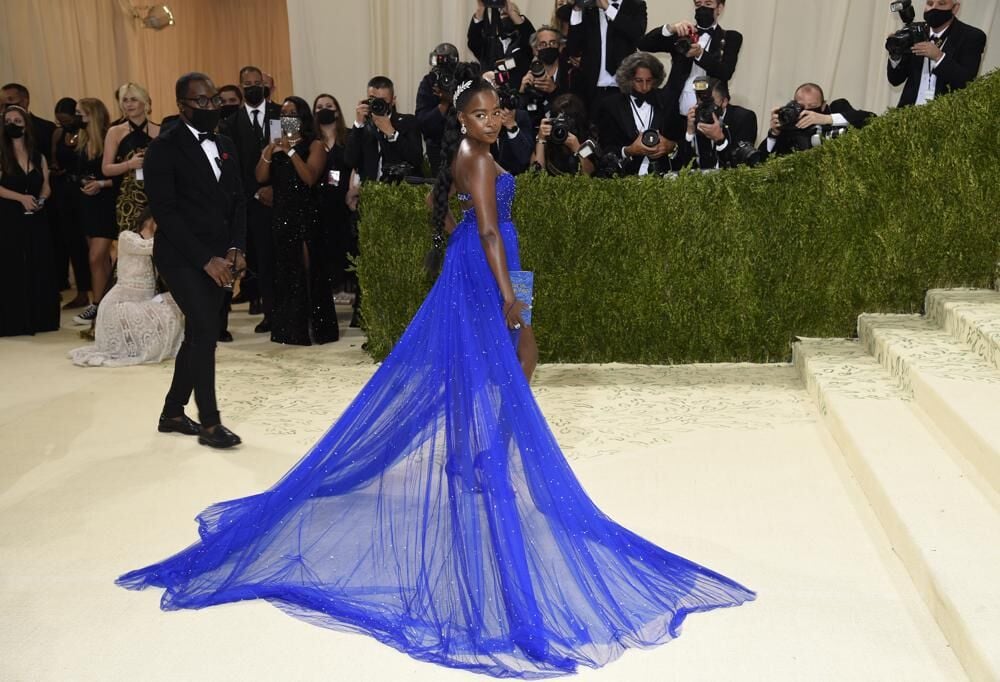 Amanda Gorman making her entrance at The Metropolitan Museum of Art’s Costume Institute benefit gala celebrating the opening of the “In America: A Lexicon of Fashion” exhibition Sept. 13, 2021, in New York. 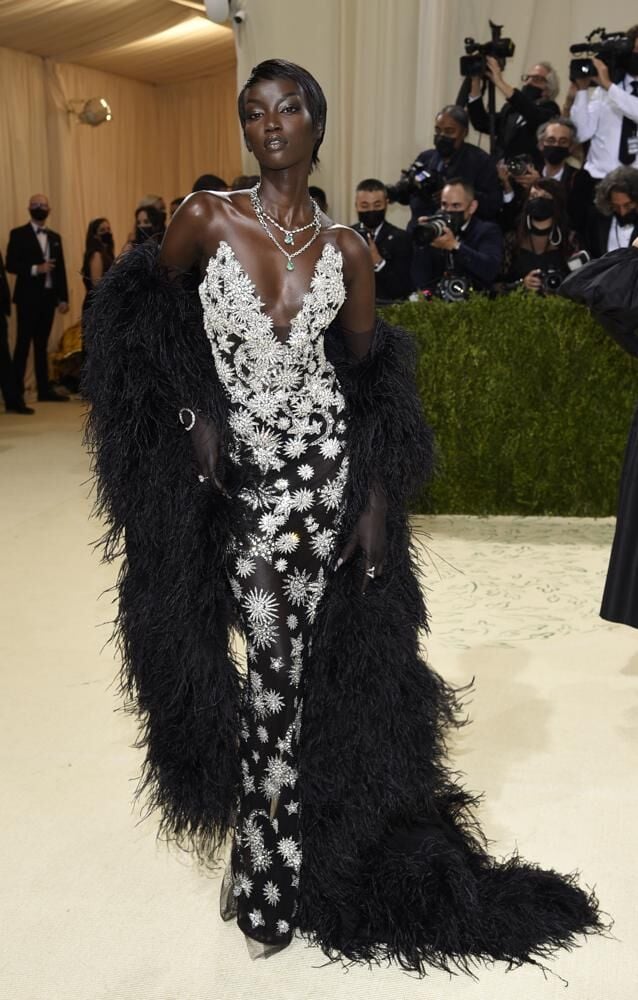 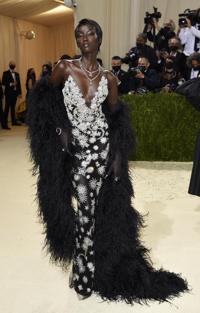 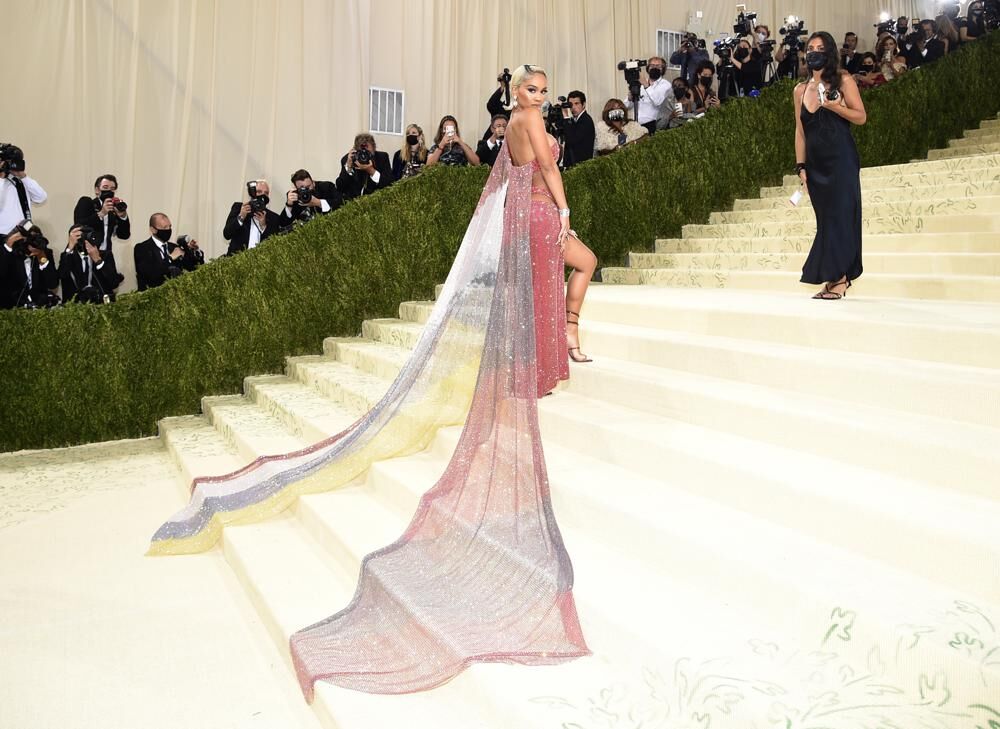 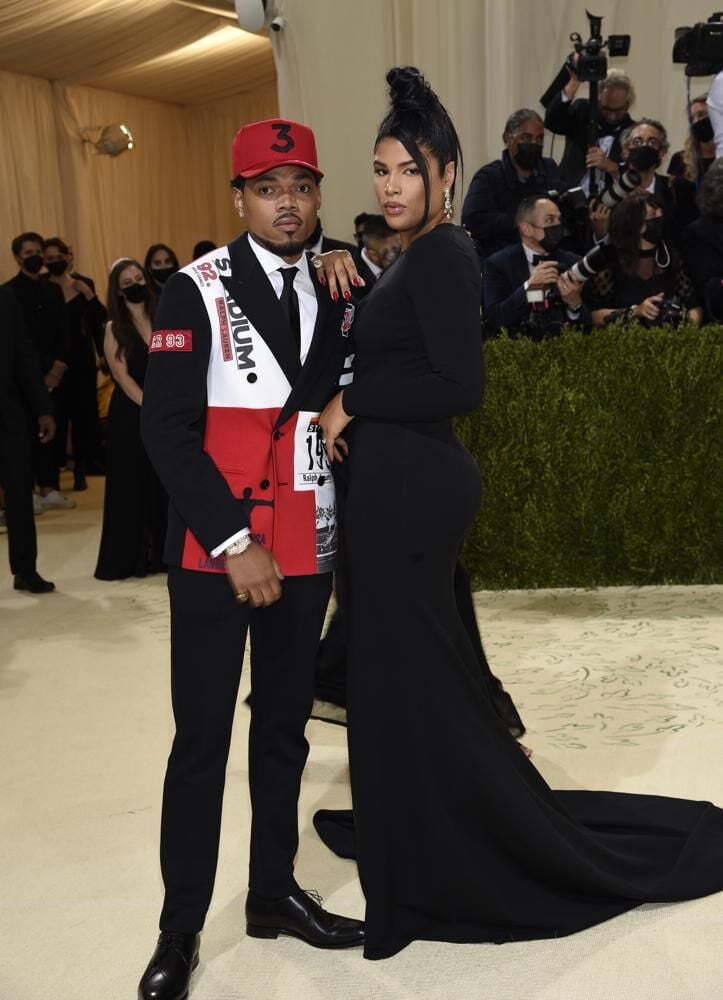 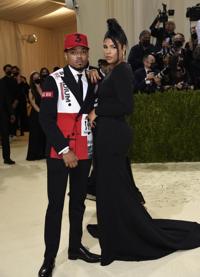 Chance the Rapper (L) and Kirsten Corley at the Met gala. 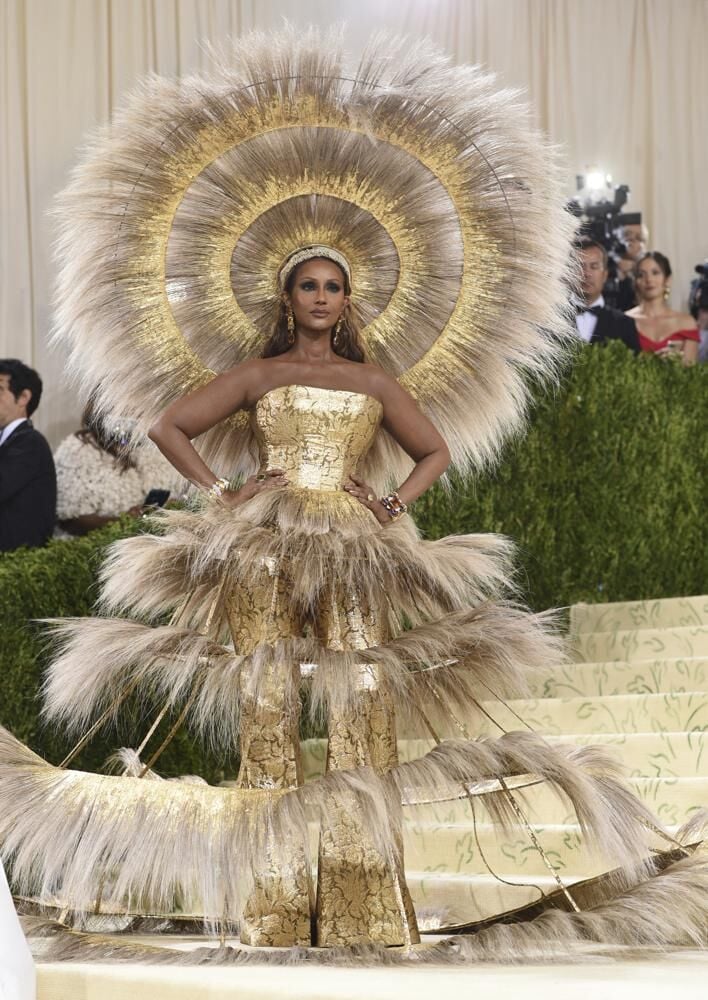 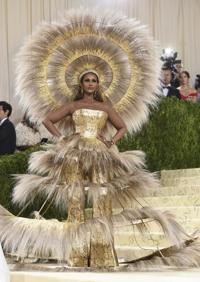 Iman evoking native American roots at the Met gala, which this year celebrated the opening of the “In America: A Lexicon of Fashion” exhibition. 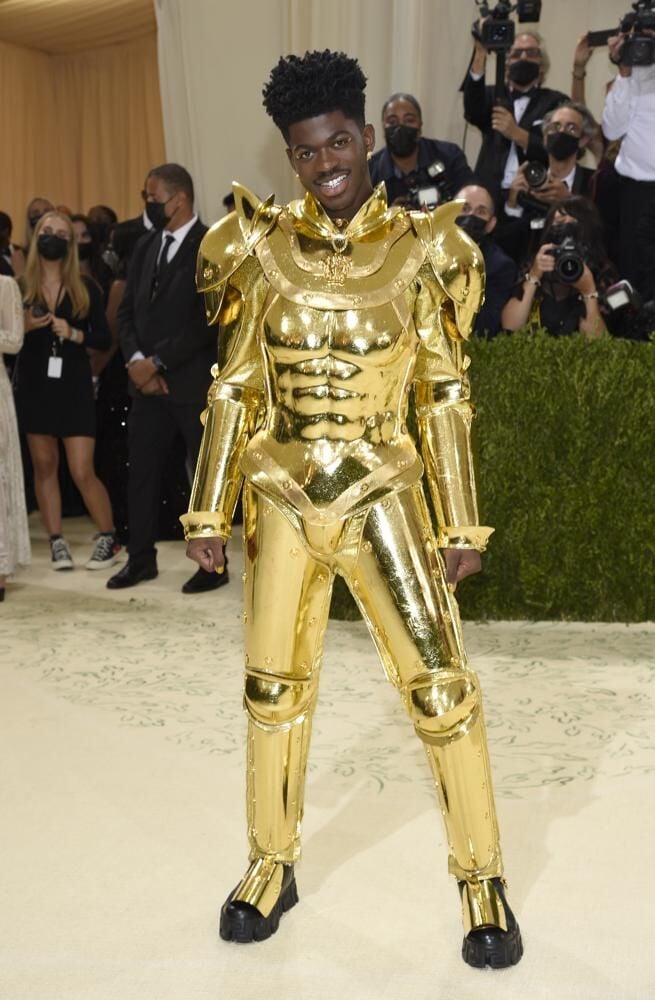 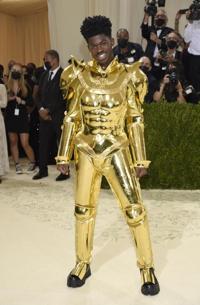 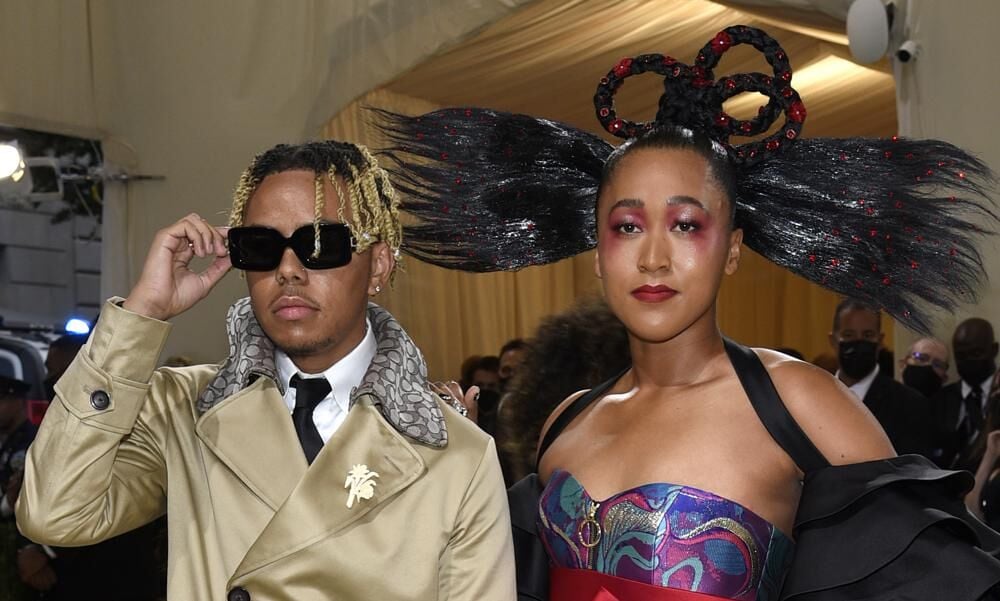 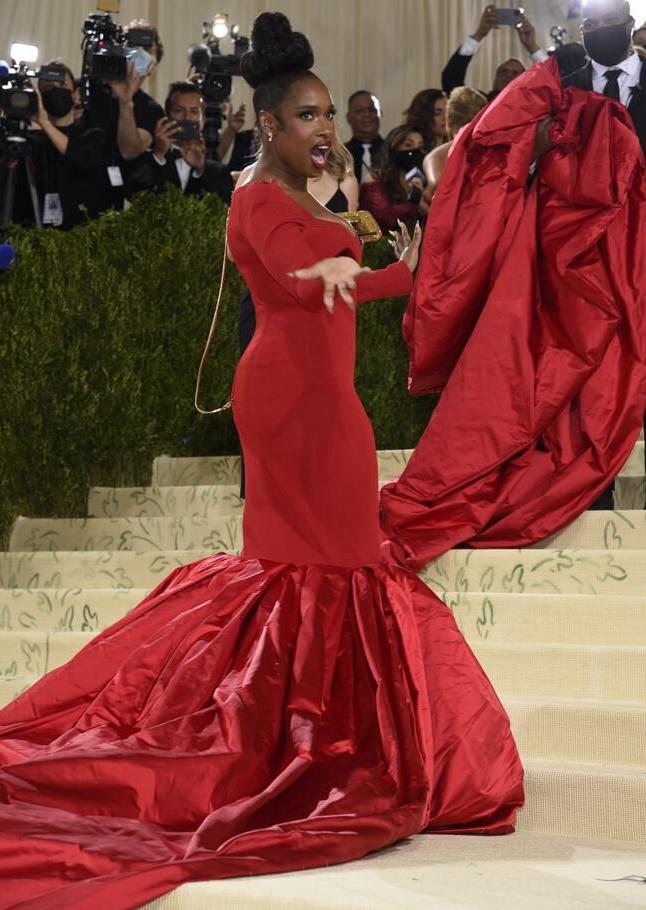 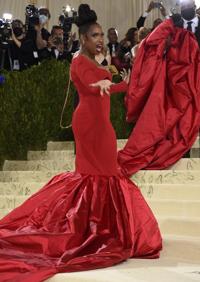 Jennifer Hudson at the Met gala in New York.

Amanda Gorman making her entrance at The Metropolitan Museum of Art’s Costume Institute benefit gala celebrating the opening of the “In America: A Lexicon of Fashion” exhibition Sept. 13, 2021, in New York.

Chance the Rapper (L) and Kirsten Corley at the Met gala.

Poet laureate Amanda Gorman was one of the hosts of Monday’s pandemic-delayed Met gala, where she wowed in a breathtaking blue custom Vera Wang gown with a diamond laurel wreath in her hair.

This year’s official theme of the fundraiser for the museum’s Costume Institute was “American Independence,” leaving plenty of room for interpretation. Just ask Lil Nas X, who did a Lady Gaga-esque striptease on the carpet in gold Versace, from cape to armor to embellished jumpsuit.

Gorman’s dress, which included more than 3,000 hand-sewn crystals, was made to evoke a starry night sky. She told Vogue she felt like Lady Liberty, reimagined. Her crown, the star poet said, was a nod to publishing.

Another of the hosts, Naomi Osaka, wanted to celebrate all her cultures – Japan, Haiti and the U.S – and picked a Louis Vuitton gown designed in collaboration with her sister, Mari Osaka. It was a swirly blue, aqua and purple print with long black ruffle sleeves and a wide red sash.

If this gala produced a trend, it’s huge statement sleeves, with some stars and stripes thrown in. There was a smattering of red, as in the red, white and blue of the American flag. Karlie Kloss wore red Carolina Herrera with huge ruffles at the neck and sleeves. Jennifer Hudson also chose red sans sleeves.

The gala, drawing standouts in fashion, TV, film, sports, tech and beyond, included tiny but mighty Olympian Simone Biles in an 88-pound Area gown of silver with a top adorned in a firework burst pattern and a huge train, carried up the museum steps by six men.

Ralph Lauren dressed Jennifer Lopez in a faux fur wrap with a dark brown crystal and beaded look in her signature plunge at the neck and high slit, a wide-brimmed Western-style hat on her head.

Yara Shahidi wore silver custom Dior complete with a headpiece. She said she was inspired by Josephine Baker. Emma Chamberlain went for a gold mini with cutouts at the waist and chunky mirror and chain detail. Harris Reed, in collaboration with Dolce & Gabbana, put Iman in a huge golden feathered headpiece and equally adorned skirt of crinoline with a jacquard bustier.

MJ Rodriguez, the “Pose” star and first transgender performer to pick up an Emmy nomination in a major acting category, wore an old glam, black-and-white corseted look from Thom Browne. The designer called it a modern-day twist on classic American sportswear. Rodriguez attended the gala with purpose.

“Not a lot of trans girls like myself get this opportunity,” she said. “The human condition is what I’m here for.”

U.S. Rep. Alexandria Ocasio-Cortez showed up in an Brother Vellies by Aurora James gown of white with a message splashed in red across the back: “Tax the Rich.”

The easiest and most obvious way to stay true to the evening’s theme was by wearing American designers. Many of the greats, including Michael Kors, showed up, along with smaller brands. Black American designers, such as Christopher John Rogers, Aliette and Sergio Hudson also had their moment.

There were hair statements as well.

The gala, which raises money for the museum’s Costume Institute, was pushed last year from its traditional May berth and morphed this year into a two-part affair marking the institute’s 75th anniversary. It coincides with the opening of “In America: A Lexicon of Fashion,” the first of a two-part exhibition at the Met’s Anna Wintour Costume Center.

Organizers invited 400 guests, or about a third the number that usually attend.