You have permission to edit this article.
Edit
About Us
News
Opinion
Business
Living Black
Sports
Obituaries
Digital Edition
ADVERTISE WITH US!
Share This
1 of 5 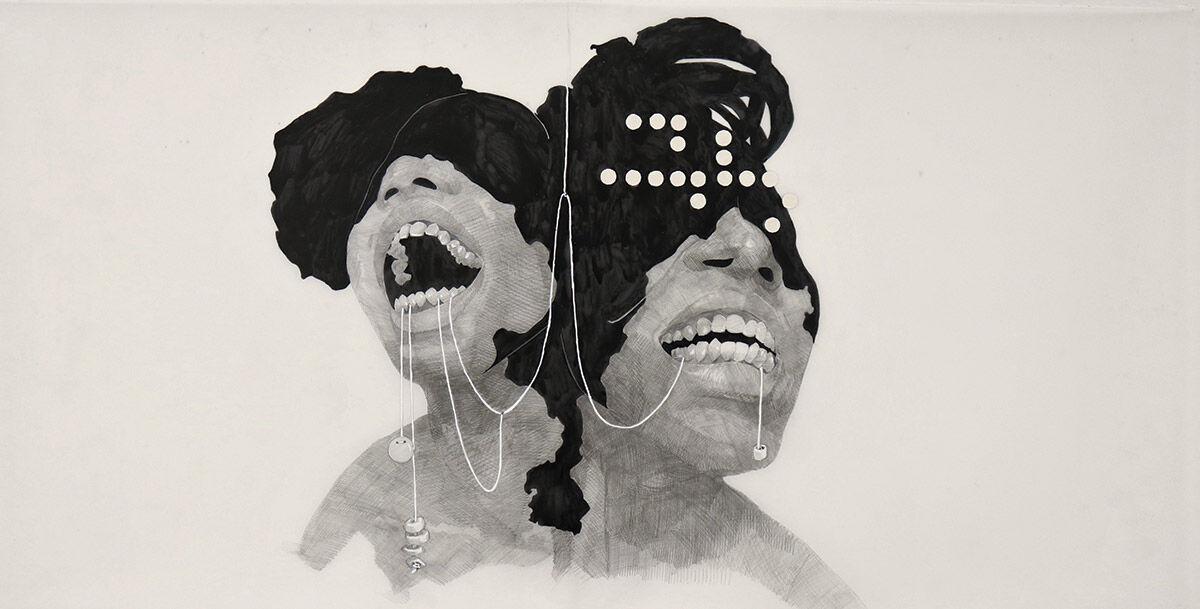 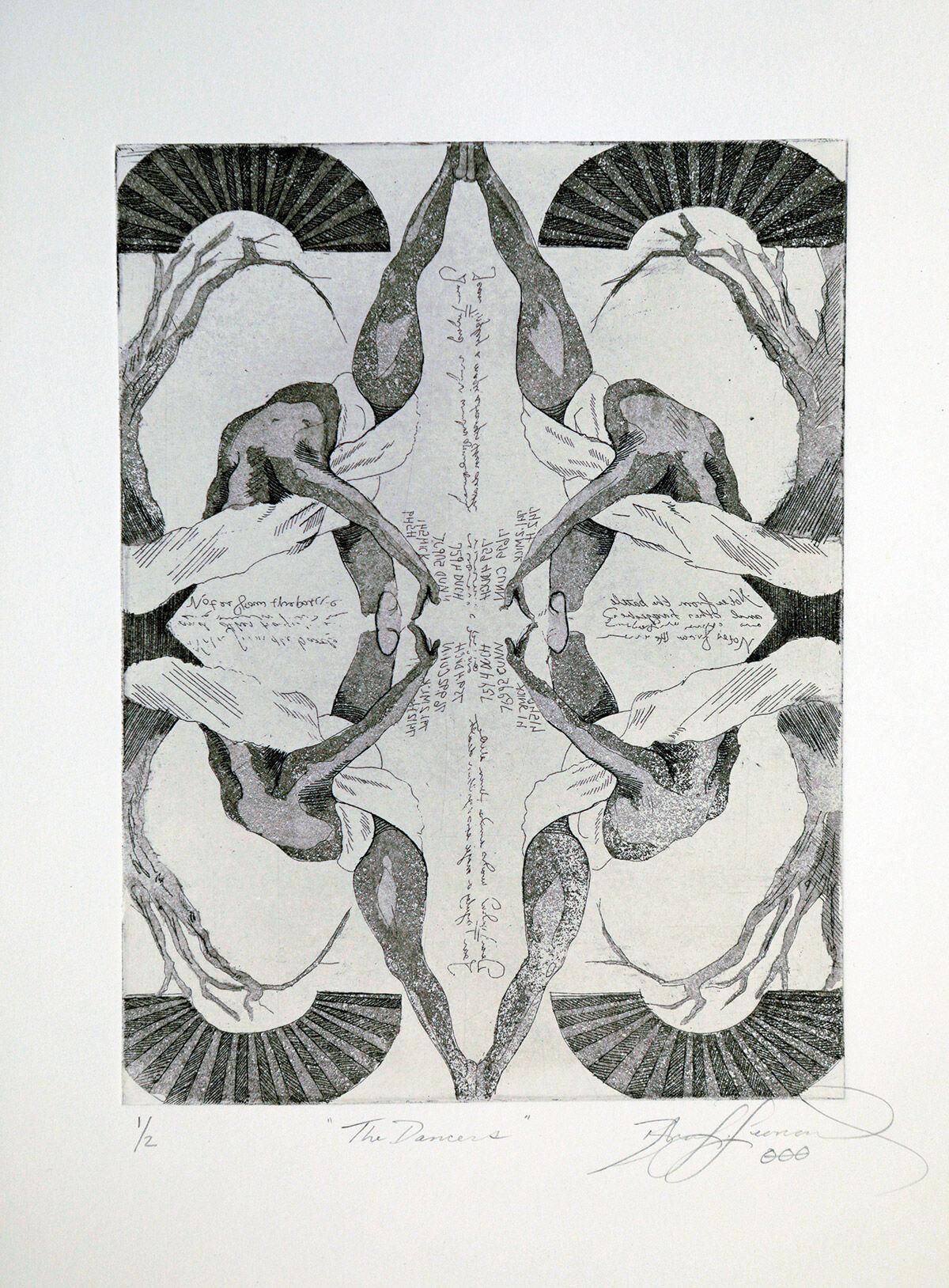 The medium holds a significant place in African culture. Rhea Leonard’s “The Dancers” speaks to influences of African tribes seen in the dances of Black culture. 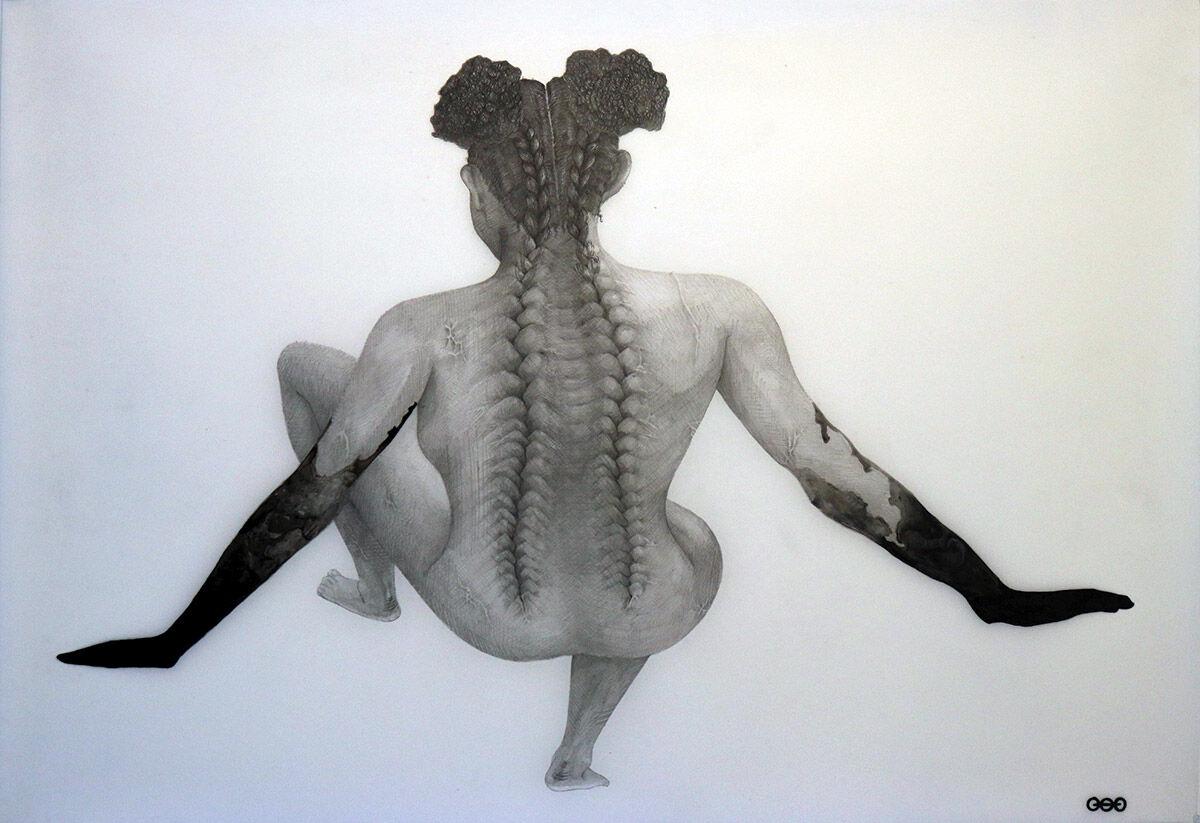 Black bodies bearing the legacy of racism is a theme of Rhea Leonard’s art, something powerfully reflected by “The Machinations of Self-Love in the Age of Racial Violence.”

The socially distanced, slowed-down pace of Miami’s 2020 plague year has given many the time to focus on long-term projects, like learning to bake bread or reactivating rarely used skills for new business models. Black artist Rhea Leonard, attracting notice for her prints and drawings of Black bodies bearing the legacy of racism, is weaving with beads.

Leonard’s been familiar with beads since her childhood in Cutler Ridge – when her mom would weave beads into the braids of her hair and her sister’s – but those were plastic and kid-size.

“Beads were always around me,” she recalls, but she’s never until now cultivated the patience to spend hours positioning one tiny glass bead after another. For her MFA show at Florida International University in 2018, she acknowledges that there was some beading, but the process was slow and tedious because of her inexperience with the medium. Now, at age 29, she’s devoting time to hone her skills and take them to a new level.

“It’s been amazing. I’ve had to research beading, really get into how you can weave a certain type of thread,” she says, as well as how to use different types of needles and the best way to use certain types of beads.

Her research has yielded impressive results, at once stunning and sobering. Consider the precise grace informing her current work in progress, “The Mourning Veil.” It started out as a project to commemorate her aunt, who passed last year around the Fourth of July.

“As the virus took its toll on our country, it started to evolve into a memento mori,” she says, referring to the classic artistic symbol for death’s inevitability.

Now, it’s tragically apt for this moment. The Black Lives Matter movement, twinned with the coronavirus disproportionately affecting people of color, magnifies her acute awareness of deep losses in the Black community.

“People are dying way ahead of their time for reasons that are absolutely ridiculous,” she says.

When she first began “Mourning Veil,” she remembers, it started to resemble West African headpieces with beads hanging over the face, but as it grew the veil became heavier and burdensome to wear. She’s thinking when it’s finished she’ll present it as a photograph of a model wearing it, so that viewers will be looking at someone in mourning.

“And that’s the point,” said Leonard.

Her exquisite beading will most likely exist primarily as photographic documentation of an African-influenced ritual of grief, achingly timely.

If someone were to buy and wear the actual veil, she adds, “It would become just a novelty. I don’t want to cheapen grief like that, especially as it started out as a personal loss to my family.”

Beading, she says, is profoundly satisfying.

“As tedious as it is, there’s a certain peace that comes back to me and feels really familiar. It does resonate with the idea of the diaspora and how beading has been done for centuries by my people,” she says. “I don’t have a conscious recollection of them but to do something they would have done is comforting.”

Her 2020 print, “The Dancers,” is another example of imagery constructed with fascinating connections to African culture. It features a choreographed composition of bodies arranged in repeating, geometric patterns.

The print, Leonard says, pays homage to how influences from African tribes “can be seen in dances in Black culture that we have here in the U.S., from the streets of Chicago to Miami and even on the West Coast. As children are making up new dances, they have their roots in where we came from and that’s what the print celebrates.”

“Dancers” is part of the international online exhibit “Art Off-Screen,” happening through Sept. 26. Participating artists also choose a public site where their art is simultaneously visible. Leonard has mounted “Dancers” on the door of her studio at Bakehouse Art Complex; although the Bakehouse is not currently open to visitors due to the pandemic, “Dancers” will be there indefinitely. (It’s also posted on Leonard’s website and Instagram account.)

According to the “Art Off-Screen” website, inquiries about works will be directed to the artists, who’ll handle their own sales. At least 20% of proceeds go to the Artist Relief Fund, The Bail Project, the Equal Justice Initiative and other causes, or to a cause of the artist’s choice. In July, Leonard’s print “You Died Screaming (Pierced),” showing a Black woman with one hand tied behind her back as two spears penetrate her body, was selected for another online exhibit. Presented by New York-based retail and online company Showfields, this one was focused on Miami artists and assembled by Ghana-born curator and cultural critic Larry Ossei-Mensah. Explaining his emphasis on Miami, Ossei-Mensah’s online statement read in part, “Over the past several years, I’ve gotten to know the artists and activists who tirelessly work to be agents of change in their community.”

In another portrait of a Black woman’s body, Leonard depicts the skin on the woman’s back woven into a pair of beautiful braids, as if they are surreal, transformed welts from vicious lashings. The woman’s defiant, unbowed head is turned away from us. The title is painful and blunt: “The Machinations of Self-Love in the Age of Racial Violence.”

The activism which shapes Leonard’s art has consistently earned recognition. Her cast pewter and walnut wood sculpture “Inheritance: Blood at the Root” belongs to the permanent collection of the Frost Art Museum at FIU. It was selected from her MFA show via the Betty Laird Perry Student Purchase Award. This sculpture depicts the veined, spherical form of a tree root and a bone-like trunk, presented almost like a trophy, except the tree itself is upside down in a box resembling a coffin. The effect is chilling, especially with the title’s reference to the line “Blood on the leaves and blood at the root” from Billie Holiday’s song about lynching, “Strange Fruit.”

“I was drawn to Rhea’s powerful examination of race,” wrote Frost curator Amy Galpin in an email referring to this sculpture. “In this work, the viewer must consider the history of trees and landscapes – sites of racial violence. Often celebrated for their beauty, in Leonard’s work the artist draws relationships between trees and the physical and psychological terror of lynching.”

Like “Mourning Veil,” “Blood at the Root” belongs to Leonard’s “Inheritance” series about objects, the artist explains, “that commemorate certain parts of Black culture, Black history. People want to appropriate the cool, hip parts of Black culture, but they don’t want to take the trauma.” Her art addresses, Leonard adds, “This horrible reality of Black lives,” but at the same time, choosing words the woman with the braided back might use, “a certain beauty and strength in being a Black woman.”

Rhea Leonard’s work has been on display at Red Bridge Studios, the African Heritage Cultural Arts Center and the Art and Culture Center of Hollywood, as well as through Art Africa Miami and RAW PopUp. She also has been a participating artist in the Contemporary Art Program LAB with Vizcaya Museum and Gardens. As a 2018 recipient of the Betty Laird Perry Student Purchase Award, her work is part of The Betty Laird Perry Emerging Artist Collection at the Patricia and Philip Frost Art Museum.