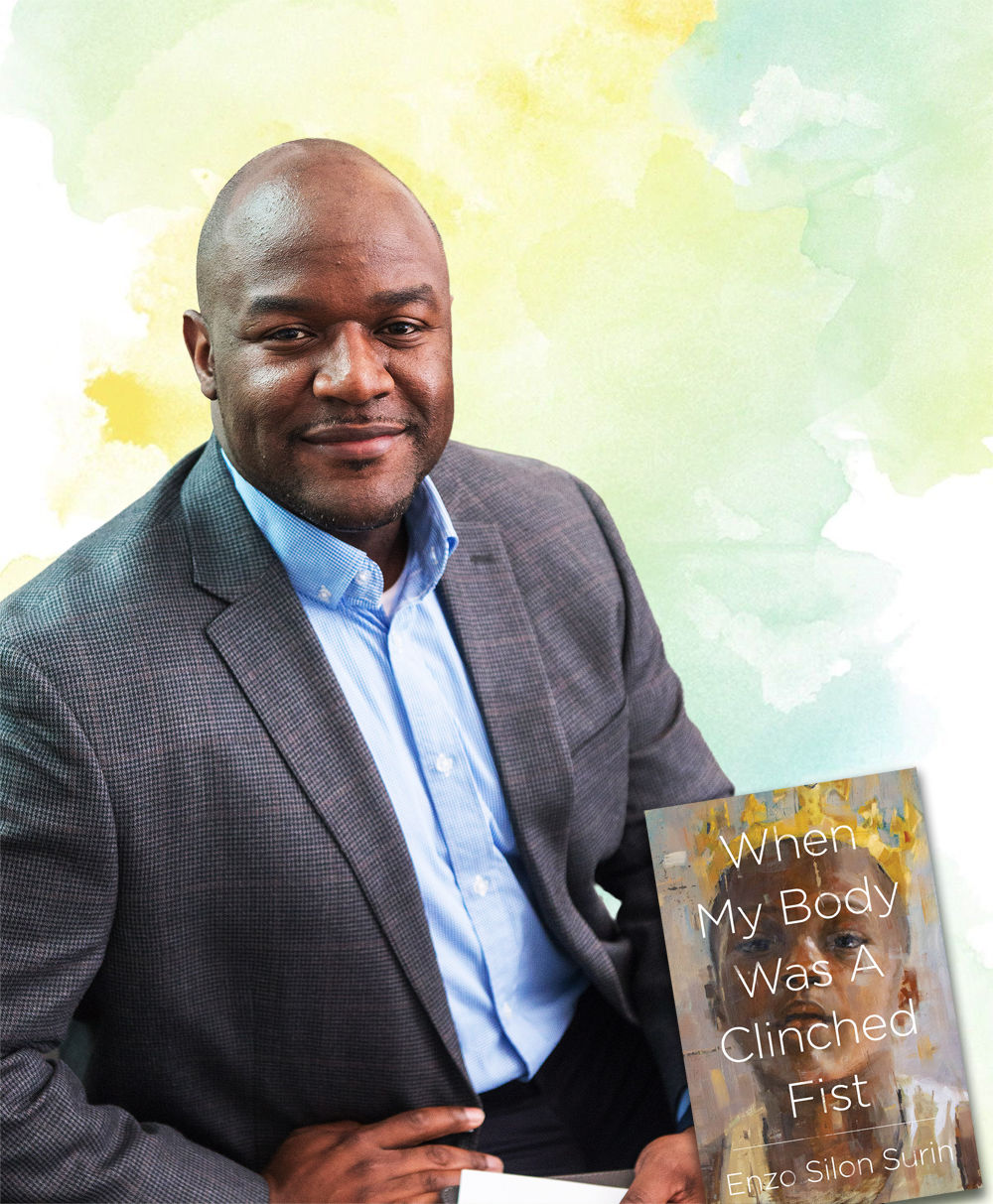 "Young black boys suffer a great deal from PTSD and consequent mood disorders as a result of the type of violence they are exposed to. Instead, what we mostly get is a perspective that portrays such young boys as active or potential perpetuators. I believe being able to name an experience and putting it into a context that one can understand is both validating and empowering."

The Revolving Door Reading Series: Online Edition Part III kicked-off at 8:00 p.m. sharp in a grid-view on Zoom. In this era of shutdown that defies the new normal, artistry prevails, friends continue to gather and poets show up. Some showed out like Ebony E. Chinn, a freelance copy editor from New Jersey who welcomes forthcoming publications on Callallo. A Salvadorian-American poet from Inglewood, CA and managing editor who answers to the name Cynthia Guardado read her ethnic insights and there, too, was Chicago poet, Lisa Farver.

But closing out the night was a quiet giant who waited patiently. His head glistened under light and he donned a tailored jacket that offered a glimpse of an Eddie Bauer t-shirt, if your perception was keen. My instincts were stoked. I waited in anticipation, but not like a giddy fan. It was simply out of respect to witness the literary manifestation of why poets bring pen to page.

Enzo Silon Surin did not disappoint. The Haitian-born poet, artist, publisher and social advocate is author of When My Body Was A Clinched Fist (Black Lawrence Press, July 2020), and the chapbooks, A Letter of Resignation: An AmericanLibretto (2017) and Higher Ground (2006). He is a PEN New England Celebrated New Voice in Poetry, the recipient of a Brother Thomas Fellowship from The Boston Foundation and a 2020 Denis Diderot [A-i-R] Grant as an Artist-in-Residence at Chateau d’Orquevaux in Orquevaux, France. Surin’s work gives voice to experiences that take place in what he calls “broken spaces” and his poems have been featured in numerous publications and exhibits. He holds an MFA in Creative Writing from Lesley University and is currently Professor of English at Bunker Hill Community College and founding editor and publisher at Central Square Press.

Enzo, too, is a language beast. A rhythmic master. A storyteller to reckon and after interviewing him for The Miami Time on Friday, April 24, I can personally attest that he personifies transparency. We talked the delicate matter of Black boys and dealing with mental health and anxiety, being a Brown Haitian in Black America, and how he eventually opened a clinched fist to become a loving husband and father of two boys who exudes the sensitivity he never knew as a child, but realizes it is as necessary to life as breath. Here’s what he shared in our four-question exchange:

PD: I've read it has taken you ten years to pen your upcoming collection, When my body was a clinched fist that will debut in July 2020. What served as the motivator to continue creatively until you reached the finish line?

Enzo: Whether I wanted to or not, my body was already telling a story about my experiences and that story would have remained trapped unless I released it. As someone who spent most of his youth and adult life grappling with anxiety,  it was not a complicated decision to make but it surely was one of the toughest decisions of my life. Writing about my experiences meant I had to relive each and every single one of them. As a result, I had to create safe spaces for myself and also proceed at a safe pace—having to walk back down streets I had spent years paving with a pen did not make necessarily make them any safer.

That being said, the reason why I worked so hard and for so long to cross the finish line, chiseling away at these poems, is because one day when someone happens to read said poems they might feel seen and heard in their own struggle to overcome similar situations. I want them to feel, even for a minute or two, that this thing called life is worth the hard and long chisel and that they too are worthy of such a dedication.

PD: When my body was a clinched fist is metaphorical in that you have evolved from the restraints — the streets — of adolescence into a creative force who appears quite comfortable in his own masculine skin. Tell The Miami Times how your writing process and poetic indulgence helped both evolve.

Enzo: Poetry allows us to provide what Ken Burns refers to as a “safe harbor to express our emotions.” Being both introverted and a sensitive black youth presents a far greater challenge to navigate the perilous streets of one’s life. I spent a good amount of time not just avoiding the violence but also trying to protect myself emotionally. And it was very difficult to balance the two worlds.

Society doesn’t often provide the perspective that young black boys suffer a great deal from PTSD and consequent mood disorders as a result of the type of violence they are exposed to. Instead, what we mostly get is a perspective that portrays such young boys as active or potential perpetuators. I believe being able to name an experience and putting it into a context that one can understand is both validating and empowering.

PD: Why is this collection of poems such an important reference and voice for young Black boys who have chosen to abandon violence? How can it help those who resist peace?

Enzo: When My Body Was A Clinched Fist is an interjection in the conversation about what happens to sensitive black boys in a very tough environment, especially those who choose to walk away, as recommended, and not contribute to or participate in the violence they face every single day. They become members of a subculture of society that does not receive much support or recognition for the challenges they face by making that decision. As such, they grapple with mental health issues of a different caliber, one that doesn’t manifest itself as profoundly as a strike or blow but is traumatic nonetheless. The toughest part is always walking away, finding fifty different ways to not expose oneself to the rain is not an easy task when you live in a climate prone to precipitation.

PD: How important is your Haitian heritage in the advancement of your creative voice?

Enzo: Haitians don’t shy away from difficult conversations. There is no other direction that Haitians know to move forward than that of moving forward. There is so much still going on in Haiti and our community is connected to that political structure. We are still connected to fighting two different forces. America only has to worry about America, Haitians have to worry about America, Haiti and being Black and Brown within the fight. And everyone is affected and certain people get targeted over and over. One of things I got as a kid growing up was listening to storytelling every Friday and Saturday night. You don’t get that from an MFA program, it’s an art that helps you write music like hip hop, like Haitian Soca, merengue. All of that feeds into the creative voice.