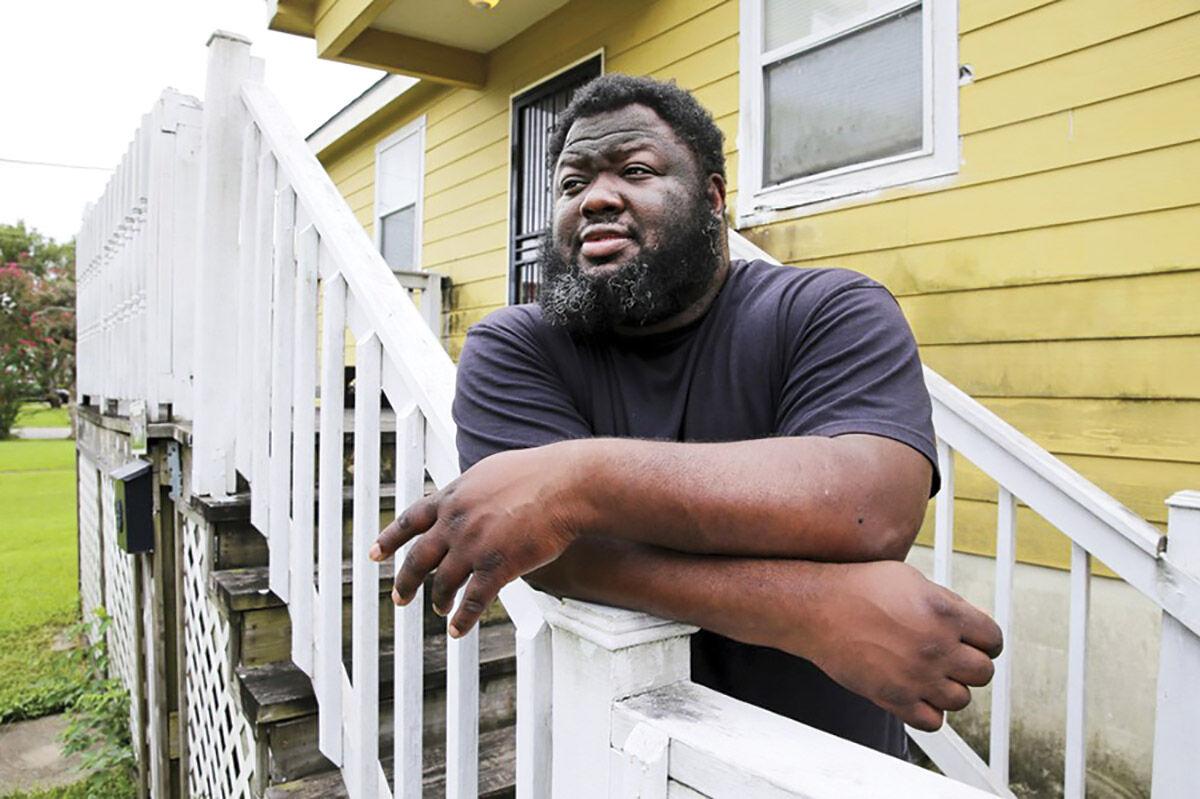 Shaun Mills, who is currently furloughed from his job due to COVID-19, stands in front of his home in New Orleans, Wednesday, Aug. 26. Even before he lost his line-cook job, he said, he struggled financially. 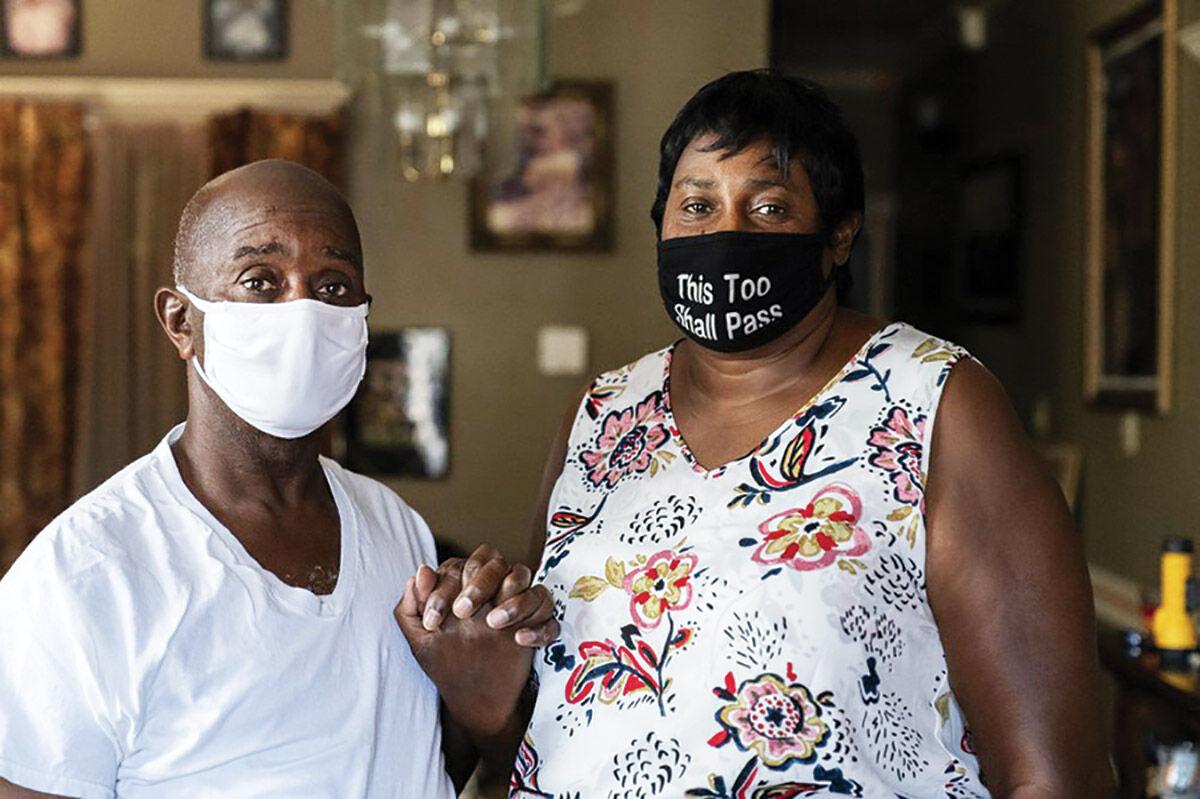 Mary and Barrett Duplessis pose for a portrait in their home in New Orleans, Wednesday, Aug. 19, 2020. Levee breaches following Hurricane Katrina dumped 6 feet of water into their home in 2005 but for her, COVID-19 has been worse.

Shaun Mills, who is currently furloughed from his job due to COVID-19, stands in front of his home in New Orleans, Wednesday, Aug. 26. Even before he lost his line-cook job, he said, he struggled financially.

Mary and Barrett Duplessis pose for a portrait in their home in New Orleans, Wednesday, Aug. 19, 2020. Levee breaches following Hurricane Katrina dumped 6 feet of water into their home in 2005 but for her, COVID-19 has been worse.

Tens of thousands of people across Louisiana remain without power or water after Hurricane Laura sawed a devastating path through the state, killing at least 11 people. Officials warned that basic services could be knocked out for weeks or longer along parts of the Gulf Coast.

Levee breaches from Hurricane Katrina dumped 6 feet of water into the New Orleans home of Mary Duplessis and her husband in 2005. The house was uninhabitable. Rebuilding meant piles of paperwork in a mountain of bureaucracy. She didn’t return to the city for a year.

But as the 15th anniversary of the storm approaches, and as another monster storm narrowly missed the city, it’s not memories of Katrina that weigh on Duplessis’ mind. It’s the coronavirus.

The Black community of New Orleans, already economically lagging behind white residents before Katrina, was pummeled by the Category 3 storm that made landfall Aug. 29, 2005, and by the lengthy rebuilding process. Images of residents, mostly Black, on top of roofs, cars and at the Superdome stadium became the most iconic of a storm that revealed to the world a city starkly divided into haves and have-nots.

Today, the city is still majority African American but has nearly 100,000 fewer Black residents than it did before Katrina. Many couldn’t imagine the community taking a bigger hit than it did from Katrina, but in some ways, that’s happening with the coronavirus pandemic. Data show New Orleans’ Black residents dying at greater rates – a trend mirrored nationally – and finding themselves less able to bounce back economically.

After Katrina, Duplessis’ husband, Barrett, was back at work as a Sheraton Hotel maintenance mechanic within weeks. Now, he’s been out of work for nearly six months. They visit food banks and use disability checks and retirement savings to get by.

She fell ill with the virus in March and was hospitalized for seven days. The list of people she knows who’ve died of COVID-19 is growing, and includes a sister-in-law and two close friends.

“Every night I go to sleep, I say, ‘Is it going to ever be the same?’” Duplessis said. “We don’t know when this is going to be over with.”

Black New Orleanians account for 60% of the city’s population but 77% of its coronavirus-related deaths as of June, according to a study by The Data Center, a New Orleans-area think tank. Among contributing factors, the study found that African Americans are more likely to live in multigenerational homes where it’s harder to self-isolate, and a larger proportion fill essential jobs that potentially put them in contact with infected people.

“My estimation of the COVID health and economic crisis is that it will be more severe on Black New Orleanians than Katrina was in terms of personal trauma, in terms of financial impact, in terms of potentially the number of deaths at the end of the day,” said Allison Plyer of The Data Center.

That’s amid soaring housing costs. Rents increased 50% from pre-Katrina amounts, a 2015 Housing NOLA report said. Black residents have more trouble making rent, with over 60% using at least a third of income on housing.

Even before he lost his line-cook job at Harrah’s sports bar amid the pandemic, he said, he struggled.

“The prices of your rent, the prices of the insurance, the living expenses, the food expenses. Everything goes up year after year except for the pay,” he said. “How can you expect a grown person to be able to provide for his family?”

The Duplessises have found firmer footing since Katrina but still lived month-to-month pre-pandemic. When the virus hit and Mary was hospitalized, Barrett was glued to his phone, awaiting updates. When she came home, he was still so worried that Mary feared he’d make himself sick.

Prayer has helped. So has staying busy at home – their iron fence is now painted black and gold, for their beloved New Orleans Saints. They try to help neighbors by giving milk or vegetables from food bank visits. Mary’s attention was briefly diverted to Hurricane Laura, as she worried the storm could make a last-minute shift toward New Orleans. They were largely spared.

Meanwhile, the bills keep coming, including September’s $900 one for health care. As long as coronavirus is around, that’s one expense the Duplessises can’t drop.

“I’m really scared of that COVID,” Barrett said. “It scares me.”