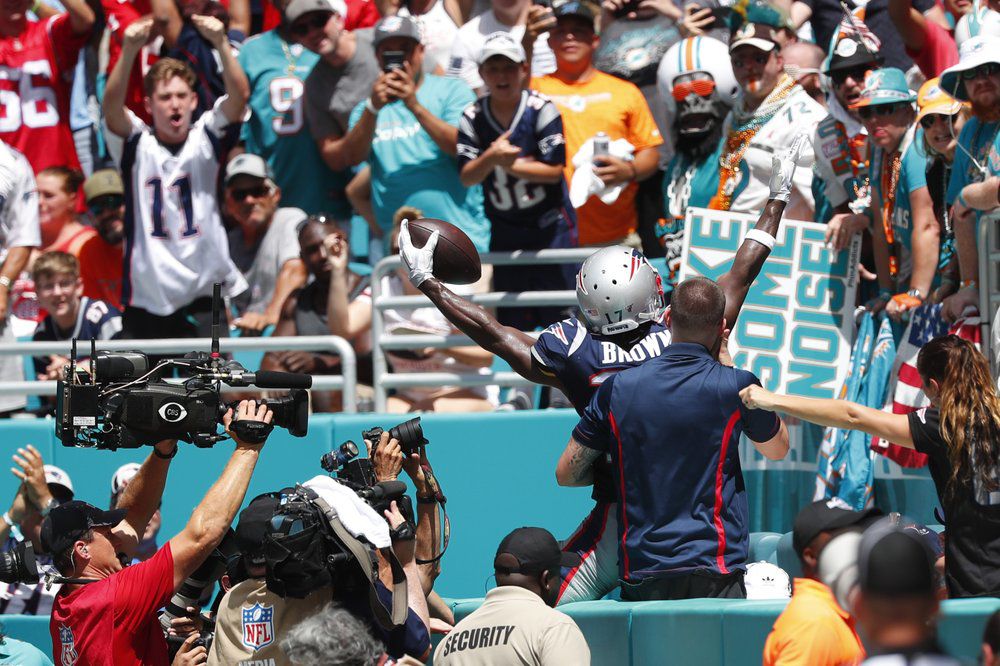 Fans of New England Patriots wide receiver Antonio Brown (17) waves from the seats after he scores a touchdown, during the first half at an NFL football game against the Miami Dolphins, Sunday, Sept. 15, 2019, in Miami Gardens. 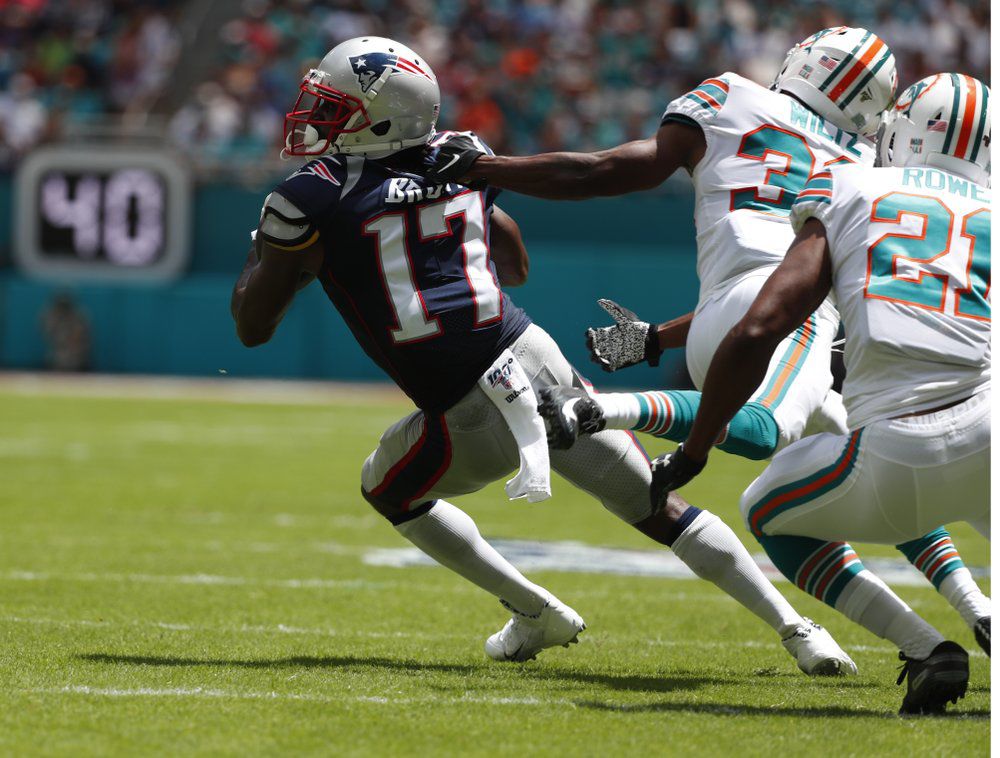 Fans of New England Patriots wide receiver Antonio Brown (17) waves from the seats after he scores a touchdown, during the first half at an NFL football game against the Miami Dolphins, Sunday, Sept. 15, 2019, in Miami Gardens.

Miami Norland Senior High alumnus and newly acquired New England Patriots, 10-year All Pro NFL veteran wide receiver Antonio Brown was in Miami to begin his 2019 season. The week 2 campaign on Sunday, Sept. 15 against the Miami Dolphins, ended  in a spanking by the Patriots 43-0 at Hard Rock Stadium. Brown had four catches for 56 yards and one touchdown. Not too bad.

The lawsuit caught the Patriots by surprise, and the team will have to decide how to proceed with Brown.

One possibility is that Roger Goodell will place Brown on the commissioner's exempt list, which would mean Brown will not be counted on the Patriots' active list while the league investigates the allegations.

The Patriots have had mixed success incorporating wideouts with outsized personalities and talent to match over the years.

Randy Moss was an unqualified success after being acquired from Oakland during the 2007 draft, setting a single-season record for touchdown catches – 23 that year. He helped New England to an 18-1 record, though ultimately losing to the New York Giants in 2008 Super Bowl. Former Bengals star and Miami native Chad Johnson flopped during his only year with the Patriots, catching just 15 passes in 2011. Josh Gordon has been a mixed bag so far, an effective downfield target while on the field but still struggling with personal demons that prohibited him from participating in last season's playoffs and in the 2019 Super Bowl.

"On Antonio's situation, both Antonio and his representatives have made statements, so I'm not going to be expanding on any of those. They are what they are. We've looked into the situation. We're taking it very seriously, all the way through the organization. I'm sure there are questions, but I'm not going to be entering a discussion about that today," Coach Belichick said last Wednesday.

While at Miami Norland, Brown was a two-sport athlete in both football and track. In football, Brown played running back, quarterback, wide receiver, and punt returner for the Vikings. Miami Norland is located less than 10 minutes away from Hard Rock Stadium.

Before being signed by the defending Super Bowl champions and before being traded to and released by the Oakland Raiders, Brown caught 100 passes for a sixth consecutive season with the Pittsburgh Steelers while putting up 1,297 yards and a league-high 15 touchdowns last year. On the surface, it looked like just another year as one of the game's top wideouts as he joined the New England Patriots, one of the most prolific franchises as they embark on a title defense.

Brown is a seven-time Pro Bowler and four-time All Pro receiver. He is undeniably one of the game’s best offensive weapons. Recently selected to be on the cover of the video game Madden 19, many never thought a kid from Miami would go on to become a sixth-round draft pick in the 2010 NFL Draft out of Central Michigan, where Brown walked on.

The football field – as is the case for many Black kids in South Florida – was his outlet. As a dual-threat quarterback, he learned how to chase greatness. He learned discipline. He learned his maniacal work ethic. Young athletes listen to Brown because they want to be Brown. They want to learn how someone from Liberty City made it out of the mud, how he went from a walk-on at Central Michigan to the best receiver in the game.

Brown didn't earn a major Division I offer. So he signed with Alcorn State, an Historically Black University, only to find out later he was academically ineligible. Unable to play football at the collegiate level, Brown enrolled in a postgrad prep school, North Carolina Tech, for a season. He then earned a full ride at Florida International University, but after getting into an on-campus dispute with an FIU security guard, his scholarship was pulled. He never stopped chasing, in spite of his missteps. Brown walked on at Central Michigan, transitioning to wide receiver. There, he finished as the school's all-time leader in receptions, second in touchdown receptions and third in receiving yards.

The rest is history: Drafted 195th overall in 2010 by the Steelers, Brown would grow into one of the league’s most dynamic pass-catchers over the course of his nine seasons in Pittsburgh and now, beginning year 10, with the Patriots.

During Brown's short stint with the Raiders and the recent actions, Brown likely wasn't going to be adding "Super Bowl champion" to his resume when he hangs up his cleats for good. Brown, who doesn't have a Super Bowl ring,  would solely be relying on his career stats – with no other tangibles or intangibles to go with them –  to be a first-ballot Hall of Famer. Add in the off-field drama that's been associated with his name this offseason such as the Demand for a trade from Pittsburgh to Oakland, Brown made it clear he was fine never suiting up again for the Steelers.

Brown was then traded from Pittsburgh to Oakland for a 2019 third- and fifth-round pick. Brown negotiated a new deal with Oakland that would pay him $50.13 million over the next three seasons. This deal included another $30.13 million in guaranteed money.

Brown had been working with the NFL and going through proper channels in an effort to wear a preferred brand of helmet that was not listed on the NFL’s mandated model of helmet list, which he filed for grievance with the league that he lost three times. While refiling during the grievance process, Brown threated to end his career and retire because he was not able to wear a helmet he wore his entire career in Pittsburgh. Ultimately, Brown found a helmet alternative that he would use. Brown did not retire over the helmet situation. In fact, he shaped it into a marketing opportunity. Brown went on to announce that he had chosen Xenith brand helmets.

The bottom of his feet were severely frostbitten after he entered a cryotherapy machine wearing improper footwear and he was sent to a foot specialist to determine the extent of the damage. He was then placed on day to day after seeing the foot specialist.

Confrontation with the General Manager

Days leading up to the start of the 2019 season, Brown got into a dispute with the Raiders General Manager Mike Mayock. Ultimately, the disagreement lead to the team suspending the All-Pro wideout for conduct detrimental to the team and Brown was then fined by the Raiders for more than $200,000 and voided $29.125 million of his guarantees.

Brown then requested to be released.  The decision to be released may have been more about the $30.13 million in guaranteed money as the New England Patriots signed Brown for a one-year, $15-million contract less than 24 hours of him being released. This was a strategic legacy move. While Brown's stats will likely get him an argument for Hall of Fame induction, there are already a slew of receivers with impressive stats that are still waiting for a call to  Pro Football Hall of Fame in Canton, Ohio. While his career stats are impressive (especially his current six-year run), Brown would be on the bubble for Hall of Fame induction if his career ended today. Having a Super Bowl champion attached to his name changes the entire discussion.

Drew Rosenhaus, Brown agent, told ESPN via Bleacher Report, “I'll just tell you that the Patriots are obviously a very solid, strong organization. They do things the Patriots Way. They expect everyone to be accountable. They don't make any exceptions. I've discussed this with Antonio. And he wants to be a Patriot. He's prepared to go there, fit in, work hard, be like every other player on the team, do what's asked of him, do his job and make it work. He's honored with the opportunity and he's looking forward to taking advantage of it.”

“A lot of people focus on the last couple of months of dysfunction and things with Antonio,” Rosenhaus said. “But what people should remember is that for eight years he was one of the most rock-solid players in the league—on and off the field. I just don't want people to lose track of that."

Brown decision to join the New England Patriots can help solidify his place in the Pro Football Hall of Fame in Canton, if he can help them repeat as champions in his hometown of Miami.  Brown now has the opportunity to be the potential unofficial ambassador of sorts for the 2020 Super Bowl as he is a native of Miami and has the opportunity to end an illustrious career riding off in the sunset as some of the greats did prior to him akin to NFL Hall of Famer Jerome Bettis Sr. did in 2006 Super Bowl with the Pittsburgh Steelers in his native hometown of Detroit, Michigan. Brown knows he has the attention of the next generation of athletes, and he wants to motivate them. If Brown was really pulling the strings in pursuit of signing with New England and winning the 2020 Super Bowl in Miami at the Hard Rock Stadium, well … business is boomin’.