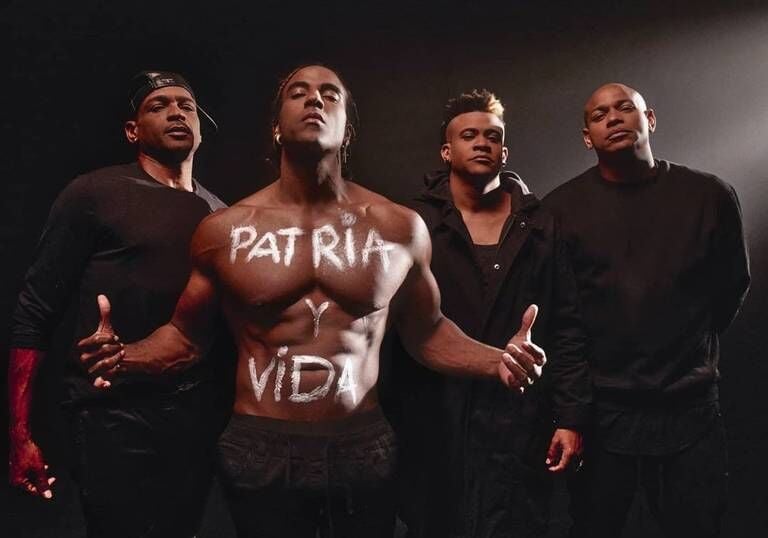 Cuban rapper Yotuel Romero (center) and other reggaeton artists collaborated in the music video “¡Patria y vida!” that was recorded in Miami, went viral and has now become a protest anthem in Cuba. 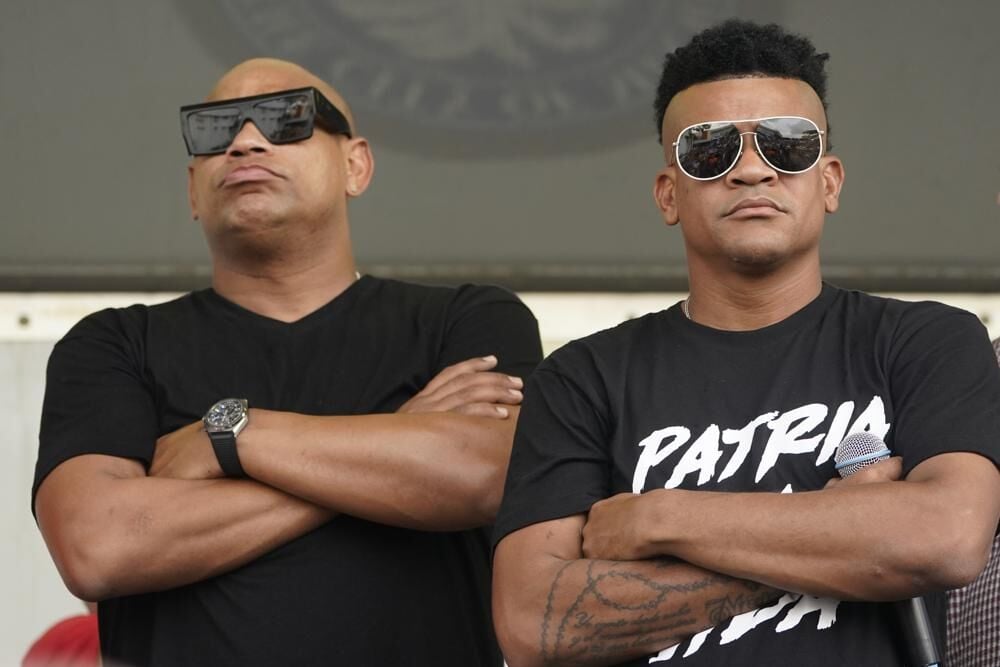 Cuban reggaeton musicians Alexander Delgado (L) and Randy Malcom, both with the band Gente de Zona, look out into a crowd of demonstrators July 14, 2021, in Miami's Little Havana neighborhood. 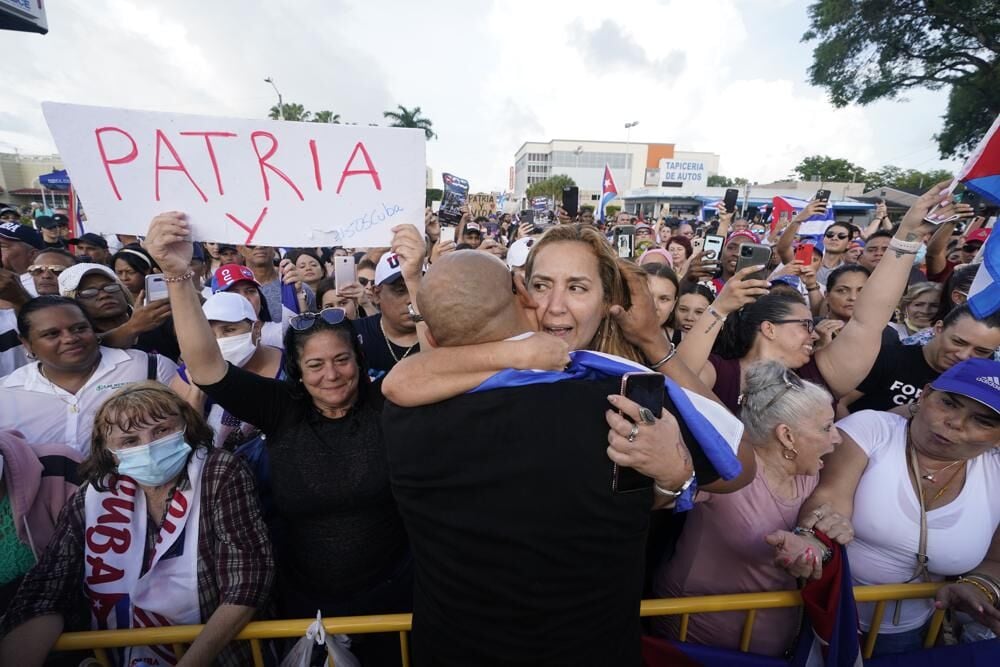 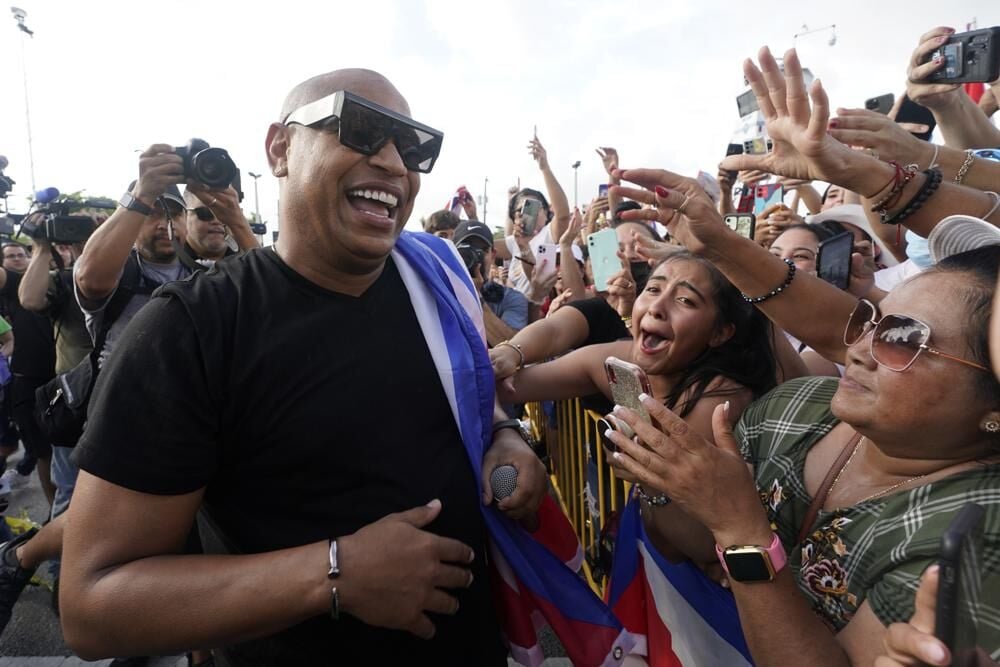 The slogan “¡Patria y vida!” – “Homeland and life!” – is heard loudly during the demonstrations in Cuba. It is a verse of a song that has become the anthem of these protests and emerged from artists who for the first time dared to express their disagreement with the government.

“Patria y vida” is performed by Afro-Cuban reggaeton artists Yotuel Romero, Gente de Zona, Descemer Bueno, Maykel Osorbo and El Funky. The song title is an intentional flip on the Cuban revolutionary slogan, “Homeland or Death,” created by Fidel Castro. Other lyrics include “No more lies, my people ask for freedom, no more doctrines/Let us no longer shout ‘Homeland or Death’ but ‘Homeland and Life.’”

“This is historic, this had never happened and people shout ‘Homeland and Life!’ in every street,” said Randy Malcom of the duo Gente de Zona, in Miami. “We are very proud.”

“We knew that ‘Patria y vida’ was going to be a song that was going to greatly influence the thinking of Cubans,” he added. “But we didn’t know it would get so far and we are very proud, honestly, for being the driving force behind the Cuban people to take to the streets to denounce everything that this dictatorship does.”

The rap track was released in February, after which it amassed more than six million views on YouTube. It was clear to Cuban singer Yotuel Romero that its artists wanted to encourage people to speak out against authoritarianism.

“We all believe this is a song to freedom, a song to life, a song to the love for our land,” he said then in a video posted on Instagram. “I want them to say it’s over with us. The lies are over, the deception is over, the torture is over, the imprisonment is over, the prisons are over.”

Romero’s representatives did not immediately respond to requests for comment from the singer about the protests.

Romero, a member of the music group Orishas, initially raised the idea for the song. The artists began working on it in Miami and sent it to Maykel Osorbo and El Funky, who are part of the San Isidro Movement that since 2018 has protested against the Cuban government. The song was finished in Miami, while its video had to be filmed surreptitiously in Cuba due to the participation of the artists of San Isidro.

“They couldn’t film. If someone saw them, they would be put in jail and we had to do it secretly,” Malcom said.

Last weekend the song resounded as a cry of protest at massive anti-government demonstrations, something that had not been seen in Cuba in decades. Following the protests there were riots, hundreds of arrests, injuries and one civilian death (according to official figures), and internet access was limited on the island.

People were protesting shortages, power outages and limited access to COVID-19 vaccines. Cuba is going through its worst economic crisis in decades and protesters are demanding political change. Demonstrations spread to other cities, including Miami and Mexico City.

The Cuban government has insisted that U.S. sanctions – added to its own deficiencies – explicitly sought to economically suffocate the island to generate discontent. A social media campaign that included Twitter was used to promote the marches.

Several requests for comment from the AP went unanswered.

The musicians behind “Patria y vida” denounced that the unarmed civilian population is being repressed in the demonstrations in Cuba.

Gente de Zona is known for hits like “La Gozadera” with Marc Anthony, “Niña” with Becky G and “Si no vuelves.” “Patria y vida” is its first politically charged song, and puts the group in the tradition of the Latin American protest song.

“It becomes a commitment that you have with your people, who have followed you and given you everything you have today,” said Alexander Delgado, the other member of the reggaeton duo. “We never knew that your talent and a song could be the weapon to hit these people hard, this government.”

Malcom and Delgado said that what the demonstrators are asking for is a free and democratic Cuba, and that their discontent is genuine, not a minority influenced by the U.S. as some have indicated.

In “Patria y vida,” they sing that the country has been locked up for six decades, in reference to the years of the Cuban regime.

“It can reach a century if we don’t do what is happening today,” Malcom added.