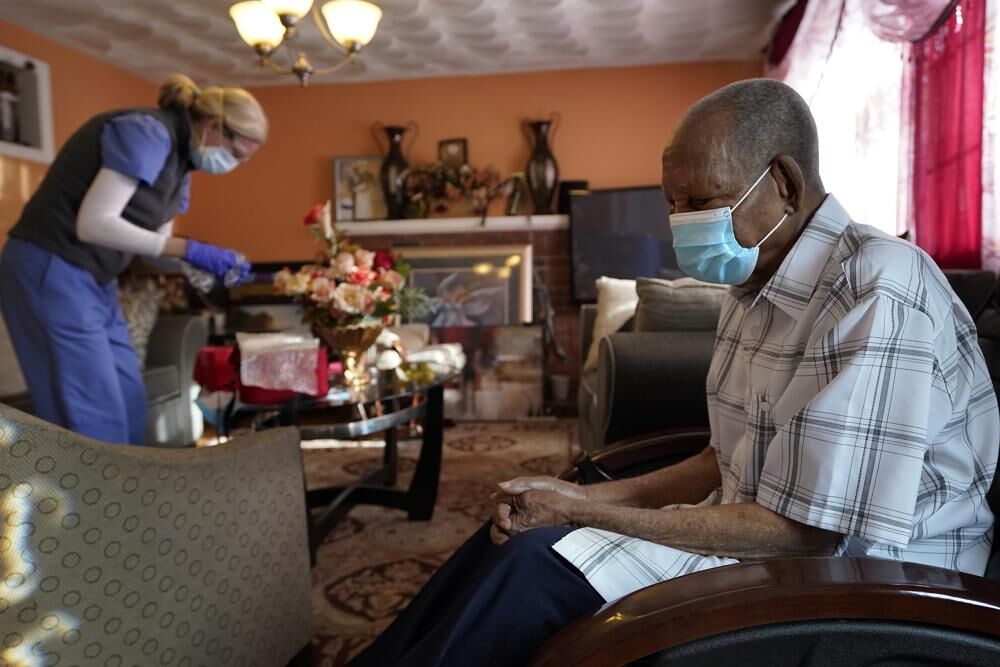 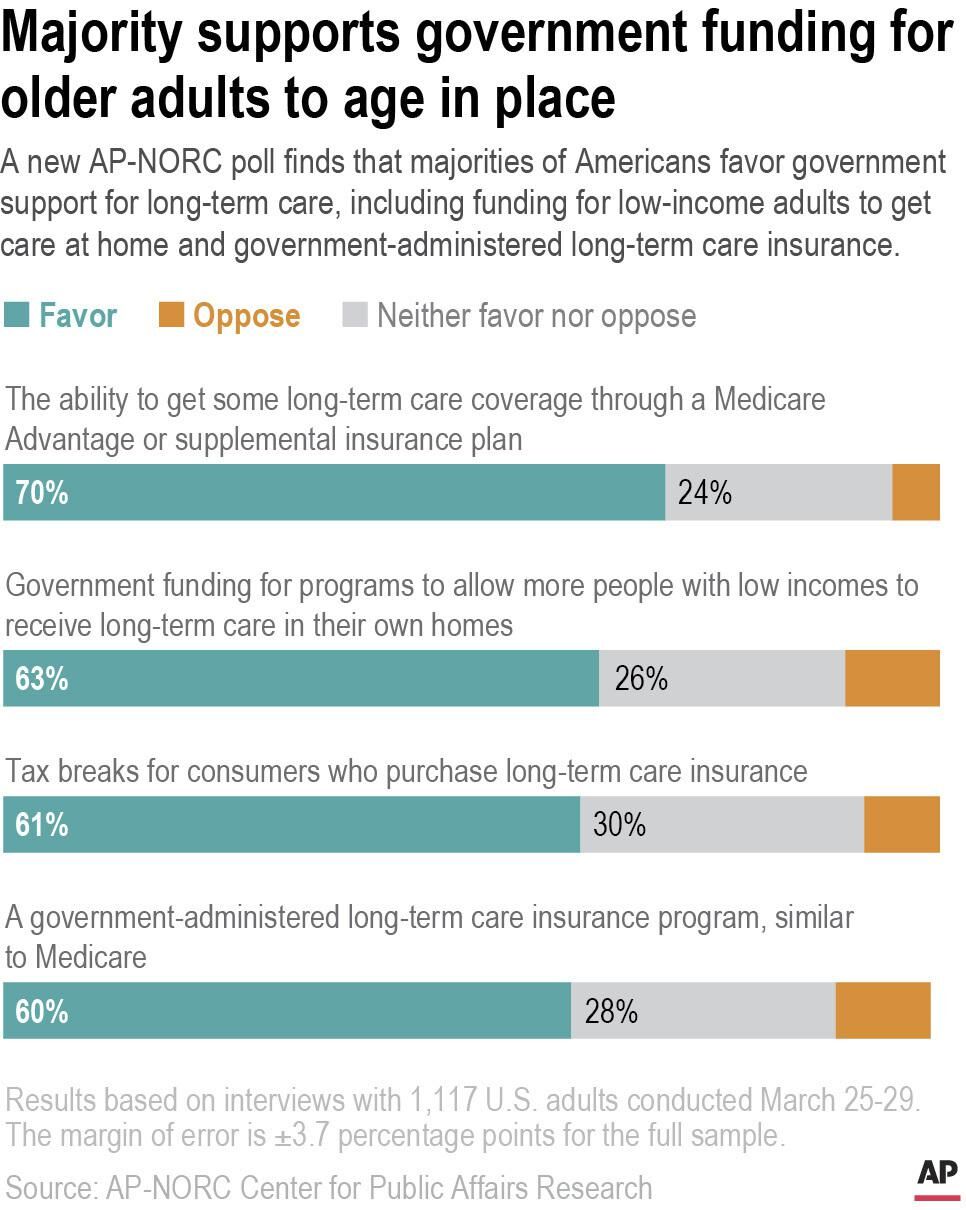 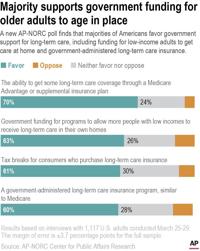 A majority of Americans agree that government should help people fulfill a widely held aspiration to age in their own homes, not institutional settings, a new poll finds.

There’s a surprising level of bipartisan agreement on some proposals that could help make that happen, according to the late March survey from The Associated Press-NORC Center for Public Affairs Research. Still, Republicans lag behind Democrats in support of some policies, including the most far-reaching idea: Only 42% of Republicans favor a government long-term care insurance program for all Americans, compared with 78% of Democrats. Overall, 60% of the public supports that approach.

Other government options to help people deal with the costs of long-term care get solid support across the political spectrum.

For example, 63% favor more funding to help low-income people age at home, a policy reflected in President Joe Biden’s stimulus plan and his COVID-19 relief law. That includes about half of Republicans and about three-quarters of Democrats. Overall, only 10% are opposed.

The poll found broad backing for facilitating the purchase of long-term care coverage through a supplemental insurance plan like Medicare Advantage (supported by 70% of Americans, including 77% of Democrats and 65% of Republicans) and for tax breaks to help purchase long-term care insurance (supported by 61%, including 64% of Democrats and 58% of Republicans).

Behind it all is a deep desire among Americans to maintain their independence in an aging society.

Contrary to common belief, Medicare does not cover long-term care. Relatively few people plan ahead, and it remains prohibitively expensive for most middle-class people. Nationally, nursing home care averages more than $100,000 a year. Home and community-based services can cost tens of thousands of dollars. Private long-term care insurance has failed to catch on because premiums are high and preexisting conditions restrictions apply.

The poll found that 88% would prefer to get long-term care services as they age at home or with loved ones. Just 12% would want to receive care in a senior community or nursing home.

However, Americans’ concerns about nursing homes have eased somewhat since the ravages of the pandemic last year. The share saying they’d be very or extremely concerned about a loved one needing long-term care in a nursing home dropped from 60% in September to 44% in March. Nursing homes and senior communities are coming out of a year in lockdown because of a sustained campaign to vaccinate residents and staff, to break the cycle of infections and deaths.

Los Angeles-area resident Tevina Quintana says she’s now able to see her mother, who lives in a community for older adults. Both are vaccinated. During the COVID-19 surges last year, “it seems like they were never not on lockdown,” said Quintana, who works with special education children.

Although Quintana is in her 30s, she says long-term care should be part of the foundation of social supports. She favors a government program like Social Security to provide long-term care.

“I think it should be available for everybody. If we have to get taxed a little bit more, we get taxed for lots of things anyway,” said Quintana, who describes herself as a progressive Democrat. “We might as well do something that benefits our elders.”

“I’m concerned that fiscally, how do we pay for that?” said Martens, who describes himself as a moderate Republican. “Our Medicare and Social Security systems are challenged the way it is. If we increase the level of support for long-term care, how do we fund it?”

It would be a challenge. Democrats, who control both chambers of Congress and the White House, are working slowly and deliberately, testing the feasibility of potential approaches.

In the House, Energy and Commerce Committee Chair Frank Pallone, D-N.J., has been working on a plan that would establish a new benefit under Medicare, paying a modest daily sum to help defray the cost of home-based or institutional care. And Rep. Thomas Suozzi, D-N.Y., has proposed a public-private partnership to provide long-term care insurance for services in the home.

A new Medicare benefit would have the advantage of leaving no one behind, since all Americans would be guaranteed a basic level of coverage. But public-private partnerships would also make long-term care insurance more widely available. It’s not necessarily an either-or choice. For example, many Medicare recipients buy private insurance to fill the gaps in their government benefits.

Retired dentist Fred Rich, of Syracuse, N.Y., said he tried to buy private long-term care insurance but wasn’t able to get it because his medical history includes cancer.

“There’s a great need,” Rich said. “The baby boomers are getting older. They’ve had fewer children, and their children aren’t as affluent as they were. So I think it’s going to be a problem.”

The AP-NORC poll of 1,114 adults was conducted Feb. 12 to March 3, with funding from The SCAN Foundation. The margin of sampling error for all respondents is plus or minus 3.7 percentage points.