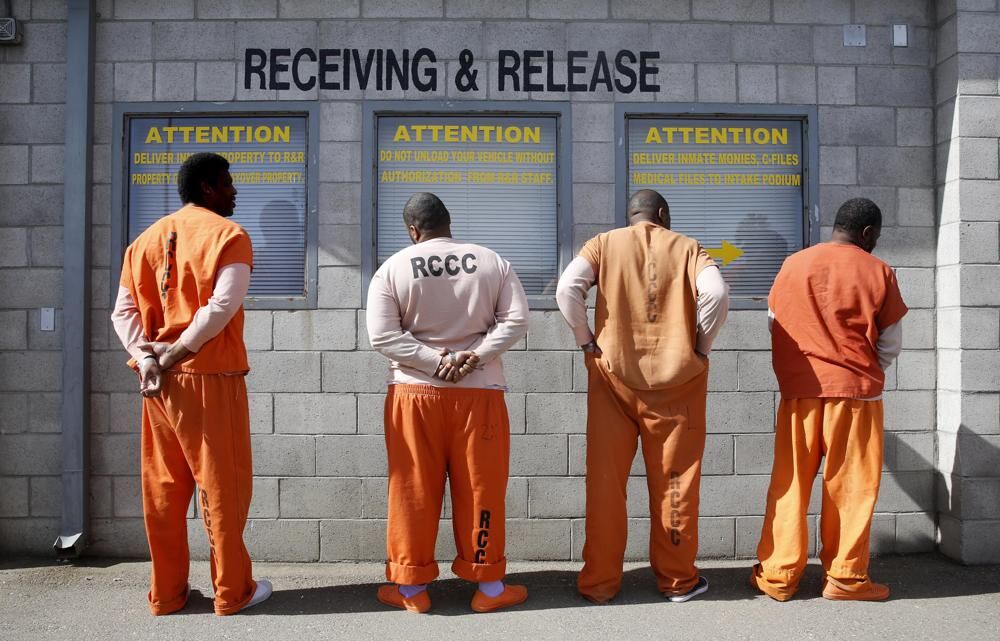 A 50-year war on drugs has imprisoned millions of Black Americans. 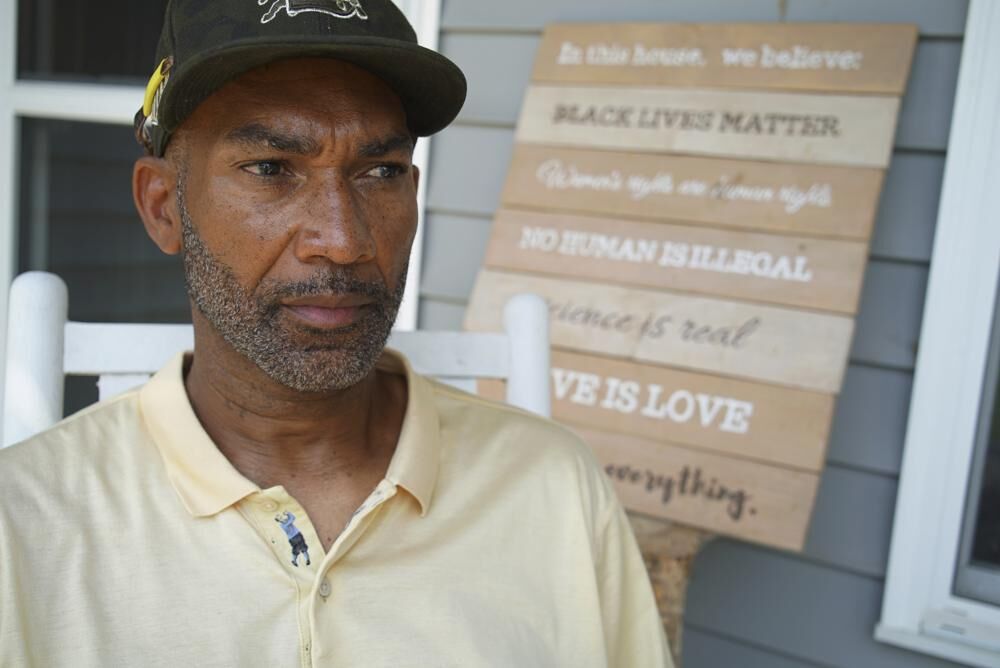 Alton Lucas sitting on the porch of his home outside of Raleigh, N.C./AP Photo/Allen G. Breed 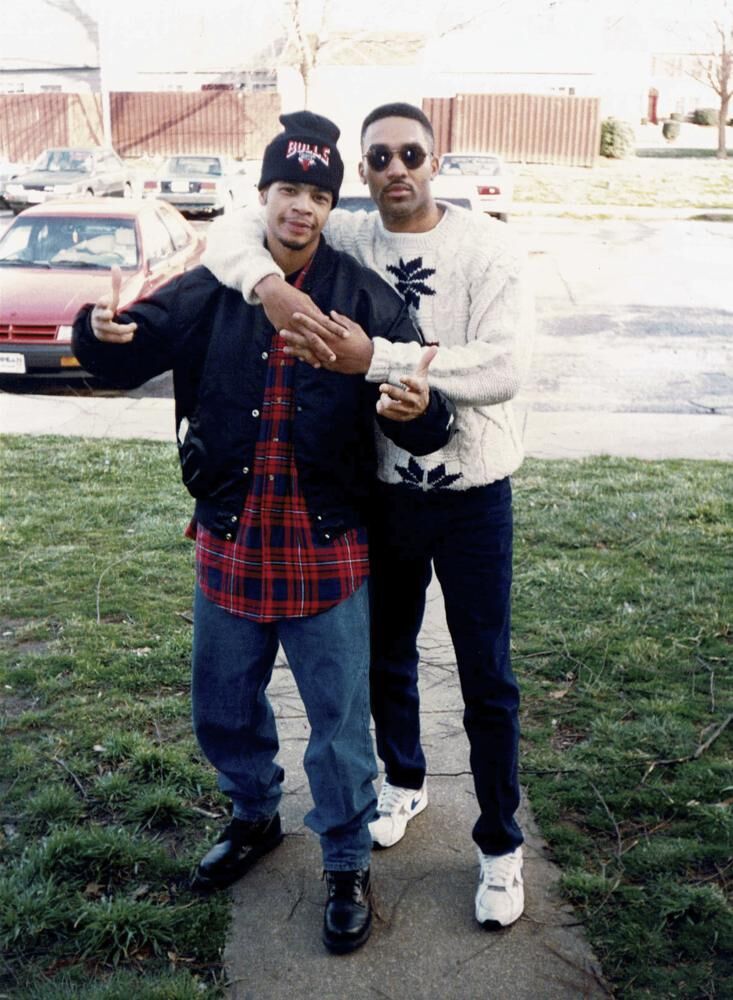 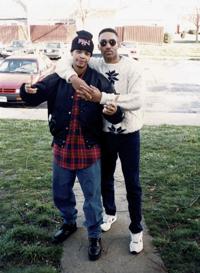 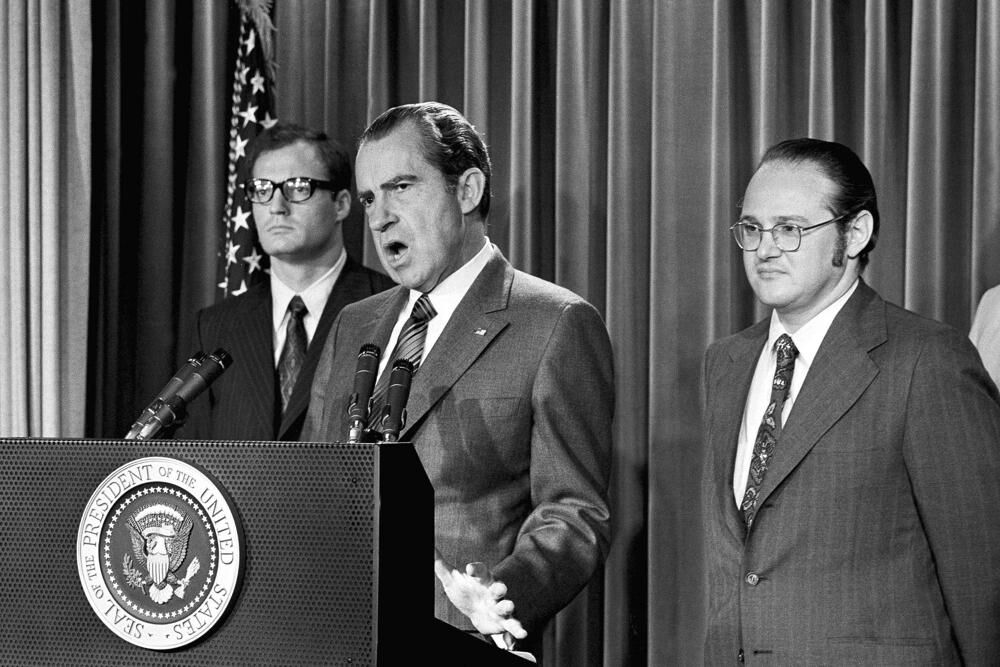 President Richard Nixon in 1971 explaining aspects of the special message sent to the Congress, asking for an extra $155 million for a new program to combat the use of drugs. He labeled drug abuse “a national emergency” and said the money would be used to “tighten the noose around the necks of drug peddlers, and thereby loosen the noose around the necks of drug users.” 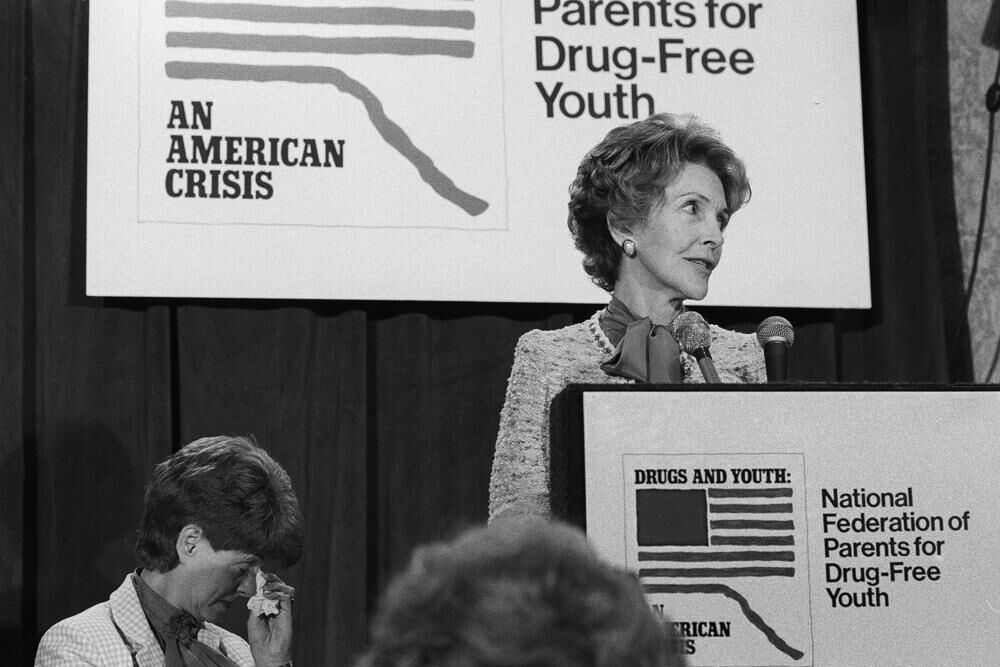 First lady Nancy Reagan, famous for her “Just Say No” anti-drug campaign, speaks at the first national conference of the National Federation of Parents for Drug-Free Youth in Washington, D.C., in 1982. 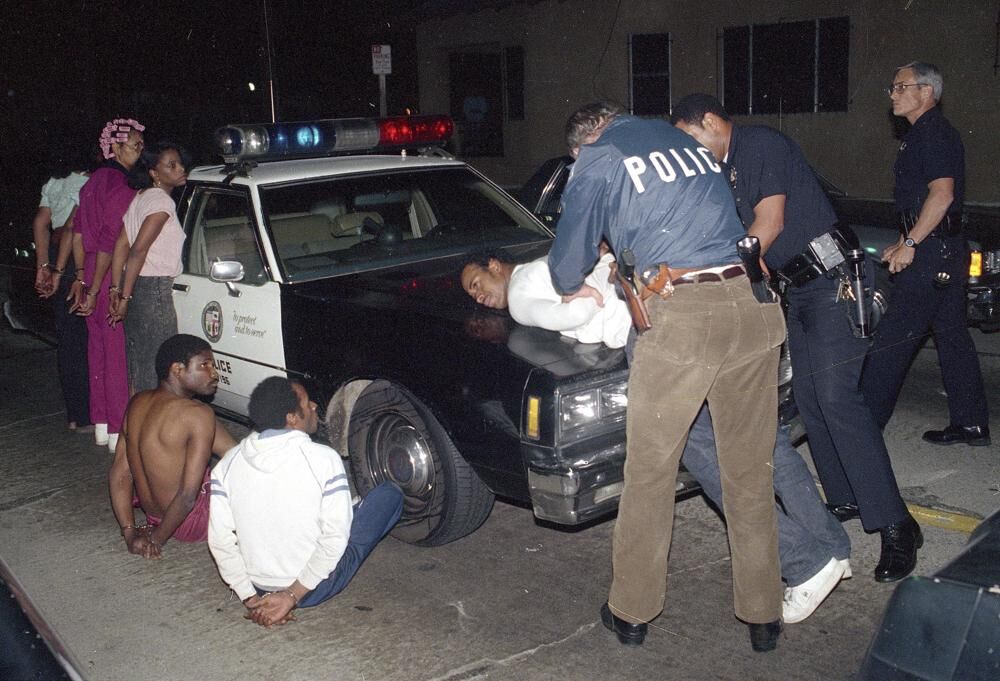 In this April 9, 1988, photo, Los Angeles police officers search one of seven people arrested for selling narcotics in the south central area of Los Angeles, as more than 1,000 police officers raided gang strongholds to attack drug dealing and street violence in the nation's second-largest city.

Landscaping was hardly his lifelong dream.

As a teenager, Alton Lucas believed basketball or music would pluck him out of North Carolina and take him around the world. In the late 1980s, he was the right-hand man to his musical best friend, Youtha Anthony Fowler, who many hip-hop and R&B heads know as DJ Nabs.

But rather than jet-setting with Fowler, Lucas discovered drugs and the drug trade at the height of the so-called war on drugs. Addicted to crack cocaine and involved in trafficking the drug, he faced decadeslong imprisonment at a time when the drug abuse and violence plaguing major cities and working-class Black communities were not seen as the public health issue that opioids are today.

By chance, Lucas received a rare bit of mercy. He got the kind of help that many Black and Latino Americans struggling through the crack epidemic did not: treatment, early release and what many would consider a fresh start.

“I started the landscaping company, to be honest with you, because nobody would hire me because I have a felony,” said Lucas. His Sunflower Landscaping got a boost in 2019 with the help of Inmates to Entrepreneurs, a national nonprofit assisting people with criminal backgrounds by providing practical entrepreneurship education.

Lucas was caught up in a system that imposes lifetime limits on most people who have served time for drug crimes, with little thought given to their ability to rehabilitate. In addition to being denied employment, those with criminal records can be limited in their access to business and educational loans, housing, child custody rights, voting rights and gun rights.

It’s a system that was born when Lucas was barely out of diapers.

The impact of anti-drug policies

Fifty years ago this summer, President Richard Nixon declared a war on drugs. Today, with the U.S. mired in a deadly opioid epidemic that did not abate during the coronavirus pandemic’s worst days, it is questionable whether anyone won the war.

But the losers are clear: Black and Latino Americans, their families and their communities. A key weapon was the imposition of mandatory minimums in prison sentencing. Decades later those harsh federal and state penalties led to an increase in the prison industrial complex that saw millions of people, primarily of color, locked up and shut out of the American dream.

An Associated Press review of federal and state incarceration data shows that, between 1975 and 2019, the U.S. prison population jumped from 240,593 to 1.43 million Americans. Among them, about 1 in 5 people were incarcerated with a drug offense listed as their most serious crime.

The law enforcement approach has led to many long-lasting consequences for people who have since reformed. Lucas still wonders what would happen for him and his family if he no longer carried the weight of a drug-related conviction on his record.

Even with his sunny disposition and close to 30 years of sober living, Lucas, at age 54, cannot pass most criminal background checks. His wife, whom he met two decades ago at a fatherhood counseling conference, said his past had barred him from doing things as innocuous as chaperoning their children on school field trips.

Although Nixon declared the war on drugs on June 17, 1971, by the time he sought reelection amid the anti-Vietnam War and Black power movements, criminalizing heroin was a way to target activists and hippies. One of Nixon’s domestic policy aides, John Ehrlichman, admitted as much about the war on drugs in a 22-year-old interview published by Harper’s Magazine in 2016.

Experts say Nixon’s successors – Ronald Reagan, George H.W. Bush and Bill Clinton – leveraged drug war policies in the following decades to their own political advantage, cementing its legacy. The explosion of the U.S. incarceration rate, the expansion of public and private prison systems, and the militarization of local police forces are all outgrowths of the drug war.

Domestic anti-drug policies were widely accepted, mostly because the use of illicit drugs, including crack cocaine in the late 1980s, was accompanied by an alarming spike in homicides and other violent crimes nationwide. Those policies had the backing of Black clergy and the Congressional Black Caucus, the group of African American lawmakers whose constituents demanded solutions and resources to stem the violent heroin and crack scourges.

“If you’re a Black leader 30 years ago, you’re grabbing for the first (solution) in front of you,” said Frederique, who is Black. “A lot of folks in our community said, ‘OK, get these drug dealers out of our communities, get this crack out of our neighborhood. But also, give us treatment so we can help folks.’”

The heavy hand of law enforcement came without addiction prevention resources, she said.

The rise of crack use

Use of crack rose sharply in 1985 and peaked in 1989, before quickly declining in the early 1990s, according to a Harvard study.

Drug sales and use were concentrated in cities, particularly those with large Black and Latino populations, although there were spikes in use among white populations, too. Between 1984 and 1989, crack was associated with a doubling of homicides of Black males aged 14 to 17. By the year 2000, the correlation between crack cocaine and violence faded amid waning profits from street sales.

Roland Fryer, an author of the Harvard study and a professor of economics, said the effects of the crack epidemic on a generation of Black families and Black children still haven’t been thoroughly documented. A lack of accountability for the war on drugs bred mistrust of government and law enforcement in the community, he said.

“People ask why Black people don’t trust (public) institutions,” said Fryer, who is Black. “It’s because we have watched how we’ve treated opioids – it’s a public health concern. But crack (cocaine) was, ‘lock them up and throw away the key, what we need is tougher sentencing.’”

Another major player in creating hysteria around drug use during the crack era: the media. On June 17, 1986, 15 years to the day after Nixon declared the drug war, NBA draftee Len Bias died of a cocaine-induced heart attack on the University of Maryland campus.

Coverage was frenzied and coupled with racist depictions of crack addiction in mostly Black and Latino communities. Within weeks of Bias’s death, the U.S. House of Representatives drafted the Anti-Abuse Act of 1986.

The law, passed and signed by Reagan that October, imposed mandatory federal sentences of 20 years to life in prison for violating drug laws. The law also made possession and sale of crack rocks harsher than that of powder cocaine.

The basketball player’s death could have been one of the off-ramps in Lucas’ spiral into crack addiction and dealing. By then, he could make $10,000 in four to five hours selling the drug.

He was first introduced to crack cocaine in 1986, but kept his drug use largely hidden from his friends and family.

“What I didn’t know at the time was that this was a different type of chemical entering my brain and it was going to change me forever,” Lucas said. “Here I am on the verge of being the right-hand man to DJ Nabs, to literally travel the world. That’s how bad the drug did me.”

By 1988, Fowler’s music career had outgrown Durham, N.C. He and Lucas moved to Atlanta and, a few years later, Fowler signed a deal to become the official touring DJ for the hip-hop group Kris Kross under famed music producer Jermaine Dupri’s So So Def record label. Fowler and the group went on to open for pop music icon Michael Jackson on the European leg of the “Dangerous” tour.

When he lacked the money to procure drugs to sell or to use, Lucas resorted to robbing businesses for quick cash. He claims that he was never armed when he robbed “soft targets,” like fast food restaurants and convenience stores.

Lucas spent 4 1/2 years in state prison for larceny after robbing several businesses to feed his addiction. Because his crimes were considered nonviolent, Lucas learned in prison that he was eligible for an addiction treatment program that would let him out early. But if he violated the terms of his release or failed to complete the treatment, Lucas would serve more than a decade in prison on separate drug trafficking charges under a deal with the court.

He accepted the deal.

Not everyone was as lucky as Lucas. Often, a drug offense conviction in combination with a violent gun offense carried much steeper penalties. At the heights of the war on drugs, federal law allowed violent drug offenders to be prosecuted in gang conspiracy cases, which often pinned homicides on groups of defendants, sometimes irrespective of who pulled the trigger.

These cases resulted in sentences of life imprisonment without the possibility of parole, a punishment disproportionately doled out to Black and Latino gang defendants.

Reckoning with the war on drugs

Frederique said reckoning with the war on drugs must start with reparations for the generations senselessly swept up and destabilized by racially biased policing.

“This was an intentional policy choice,” she said. “We don’t want to end the war on drugs and then in 50 years be working on something else that does the same thing. That is the cycle that we’re in. It has always been about control.”

As much as the legacy of the war on drugs is a tragedy, it is also a story about the resilience of people disproportionately targeted by drug policies, said Donovan Ramsey, a journalist and author of the forthcoming book, “When Crack Was King.”

“Even with all of that, it’s still important to recognize and to celebrate that we (Black people) survived the crack epidemic and we survived it with very little help from the federal government and local governments,” he told the AP.

Lucas sees beauty in making things better, including in his business. But he still dreams of the day when his past isn’t held against him.

“It was the beautification of doing the landscaping that kind of attracted me, because it was like the affirmation that my soul needed,” he said. “I liked to do something and look back at it and say, ‘Wow, that looks good.’ It’s not just going to wash away in a couple of days. It takes nourishment and upkeep.”