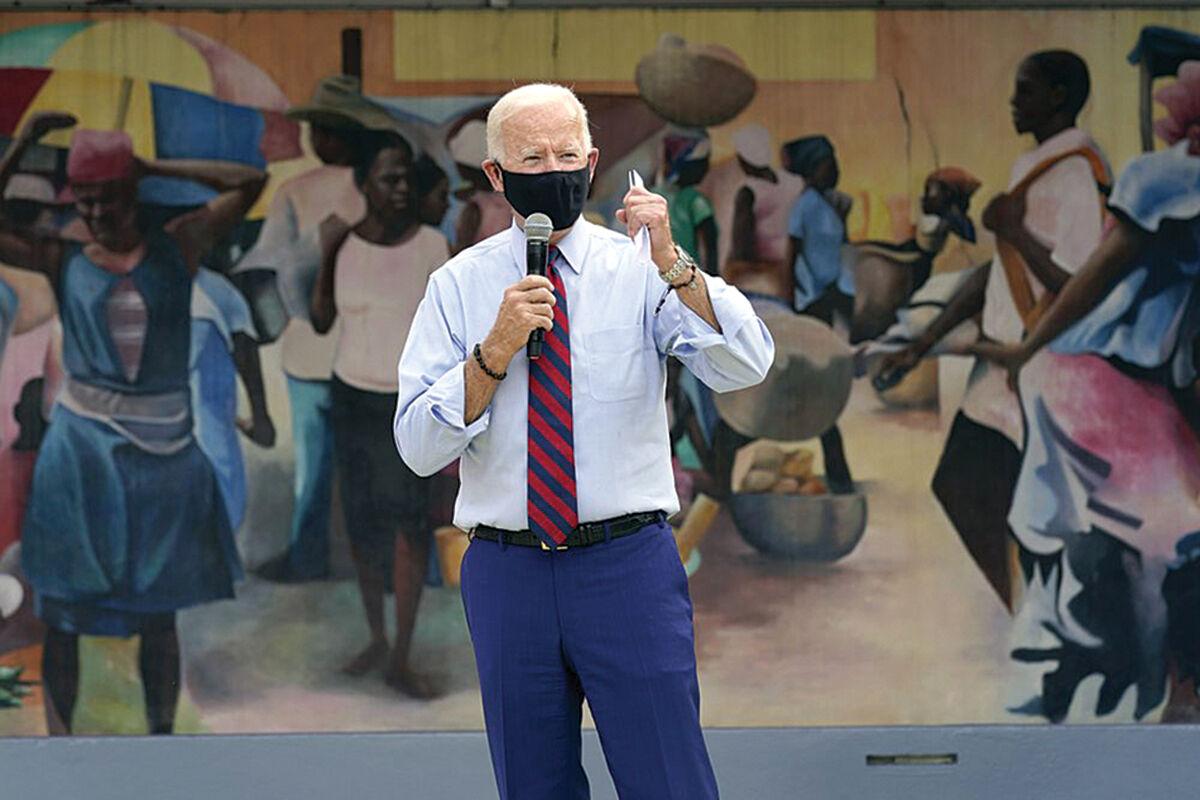 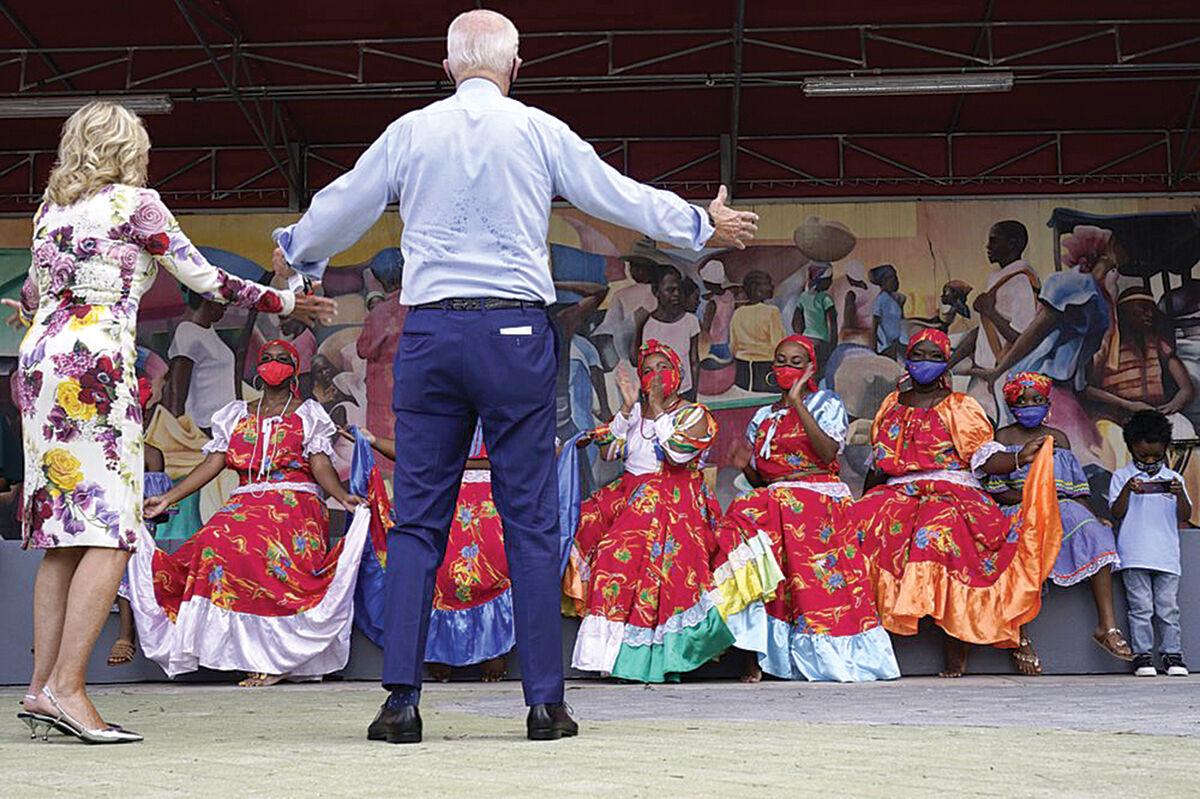 Joe and Jill Biden talking with dancers who performed during the couple’s visit to the Little Haiti Cultural Complex Monday in Miami.

As Election Day approaches, the Miami-Dade Democratic Party is redoubling its efforts to capture and turn out the Black vote.

Miami-Dade chair Steve Simeonidis said it will implement a large-scale campaign to include more than 50 community organizers stationed at its office in Miami Gardens – one of the largest Black communities in the U.S. – and at other offices located throughout the county. Four are in the predominantly Black neighborhoods of Liberty City and Miami Gardens; offices in Homestead and North Miami were opened on Oct. 3 and Oct. 4. Simeonidis believes the party is working to earn the Black vote by being accessible to the community and standing with it on issues of racial injustice and gun violence, as well as supporting the Black Lives Matter movement.

Party secretary Robert Dempster said that, as a Black man, supporting Black Lives Matter is very important to him on a personal level.

“Along with participating in the Miami-Dade protests [following the death of George Floyd], we drove up to Washington, D.C., to participate in the protests happening there with some of our staff,” he said.

On Oct. 3 the group also hosted a youth-led virtual roundtable on gun violence and safety featuring Black and Latinx activists and students involved in the March For Our Lives group, which itself stemmed from the Parkland tragedy in February 2018. It’s just one step being taken to educate area residents on the threat to their voting rights.

A report published in the Guardian on Sept. 28 shows that in 2016, the Trump campaign tried to suppress the vote of 3.5 million Black voters.

That investigation showed the campaign used an election database with records from 16 swing states, divided into eight different categories. A category marked “deterrence” was made of predominantly Black Americans who were considered likely to vote for Hillary Clinton or not at all. Those people were targeted on Facebook with advertisements claiming Clinton lacked sympathy for African Americans, aiming to dissuade them from voting.

“We at the Miami-Dade Democratic Party office find it utterly appalling and disgusting that this has happened,” said Simeonidis. “On our side, we fight and believe in easier access to the polls, while the Republican side appears to be all about repressing it, especially for people of color.”

As of Oct. 1, Democratic nominee Joe Biden holds a two point lead over Trump in Florida, according to online media news company FiveThirtyEight. To increase that gap, Biden’s campaign has been appealing to the state’s diverse population.

In major swing states including Florida, over 80% of college-educated Black voters favor Biden while 14% favor Trump, according to an online survey of more than 10,000 people conducted by Morning Consult, a global data intelligence company.

Dwight Bullard, political director of New Florida Majority, said recognition of the Black contribution to the American story is important, but tackling the critical issues that have plagued the country and Black communities in particular is critical.

“I’m cautiously optimistic that Vice President Biden and Senator Harris will continue to meet with members of the Black community,” said Bullard. “Moreover, my hope is that they will look to address issues like criminal justice reform and systemic racism.”

There are a number of Black voters who associate Biden with his tenure in the Obama administration; others look at his time in the U.S. Senate.

“In both instances, you have Black voters who are looking for Biden to make greater commitments to a prosperous future and not to rely on or make the same mistakes as in the past,” said Bullard.

Biden and wife, Dr. Jill Biden, campaigned in Miami on Oct. 3 for the first time since his nomination, where he participated in a town hall event moderated by NBC “Nightly News” anchor Lester Holt and answered questions from undecided Florida voters.

Prior to that, Biden spent time at the Little Haiti Cultural Center and pledged his commitment to Haitian Americans, saying the South Florida Haitian community is resilient and could determine the outcome of the election.

“Wouldn’t it be an irony, the irony of all ironies, if on election eve it turned out Haitians delivered the coup de grâce in this election,” he said.

“We are thrilled that the Haitian community is a priority for Biden’s team as it campaigns throughout South Florida,” said Sandy Dorsainvil, manager of the Little Haiti Cultural Center, during the event.

Biden then stopped in Little Havana to talk about building the economy and bringing jobs to the Black and Hispanic communities stating, “It’s time to make bold investments to build better than we were before COVID-19.” He also urged Trump to follow math and science and implement mask mandates as a protective measure against the disease.

Biden is scheduled to be back in Miami on Oct. 15 for the second presidential debate at the Adrienne Arsht Center for the Performing Arts, which is now in jeopardy due to Trump testing positive for COVID-19 on Oct. 1.

The visit came several weeks after Harris arrived in South Florida on Sept. 10 on Biden’s behalf. During her stop the senator met with community leaders after hosting a forum on issues faced by Black Americans, held at Florida Memorial University in Miami Gardens.

Miami-Dade NAACP president Ruban Roberts was happy to see her there.

“This is the first time I am seeing something like that on the presidential level,” said Roberts. “Sometimes our vote is taken for granted, which cannot continue.”

The fight to preserve civil rights

According to an online survey of 2,546 Americans conducted by Harvard University Institute of Politics, 18- to 29-year-olds prefer Biden over Trump by 30%. Seventy-three percent of people with a college degree believe this election will make a difference in their lives, compared to 64% of college students and 55% of respondents with no college experience. And two-thirds of those surveyed disapprove of Trump’s job performance as president. The survey included participants from every state, with 1,399 participants definitely planning to vote in the upcoming election and 89% having a high school diploma or higher.

Roberts believes young people understand the power of their vote and are starting to “leverage it as much as possible.”

“If nothing else we need to do it for John Lewis and all those who lost blood on Bloody Sunday or Harry T. and Harriette Moore, along with countless others. They sacrificed so much for our civil rights and part of that is having the right to vote,” said Roberts.

As of August, 79.1% of Black voters in Florida are registered Democrats, while 16.8% are Independent, and 3.5% Republican. A tiny 1.2% belong to alternative parties, such as the Green and Reform parties.

Bullard said Black Americans should understand that Trump has no regard for their history or contributions to the country.

“It should come as no surprise that he continually uses Black pain and Black progress as a prop, giving no real credence to its significance,” he said.

Roberts said his organization is more focused on engaging with the community through concentrating on voter education, registration and mobilization, with a goal of getting as many people registered to vote as possible. He stated that people should do their research on candidates before voting on both presidential and local levels, and stressed the importance of Black people to “vote our interests” due to broken promises and the lack of progression in solving crucial issues faced by their communities.

“We need more of a unified voice so that we are not asking these folks “what are you going to do for us,” but telling them what they need to do for us, which we need to be more cognizant of,” Roberts said. “We need to have a list of demands that is supported on both a national and a regional level.”