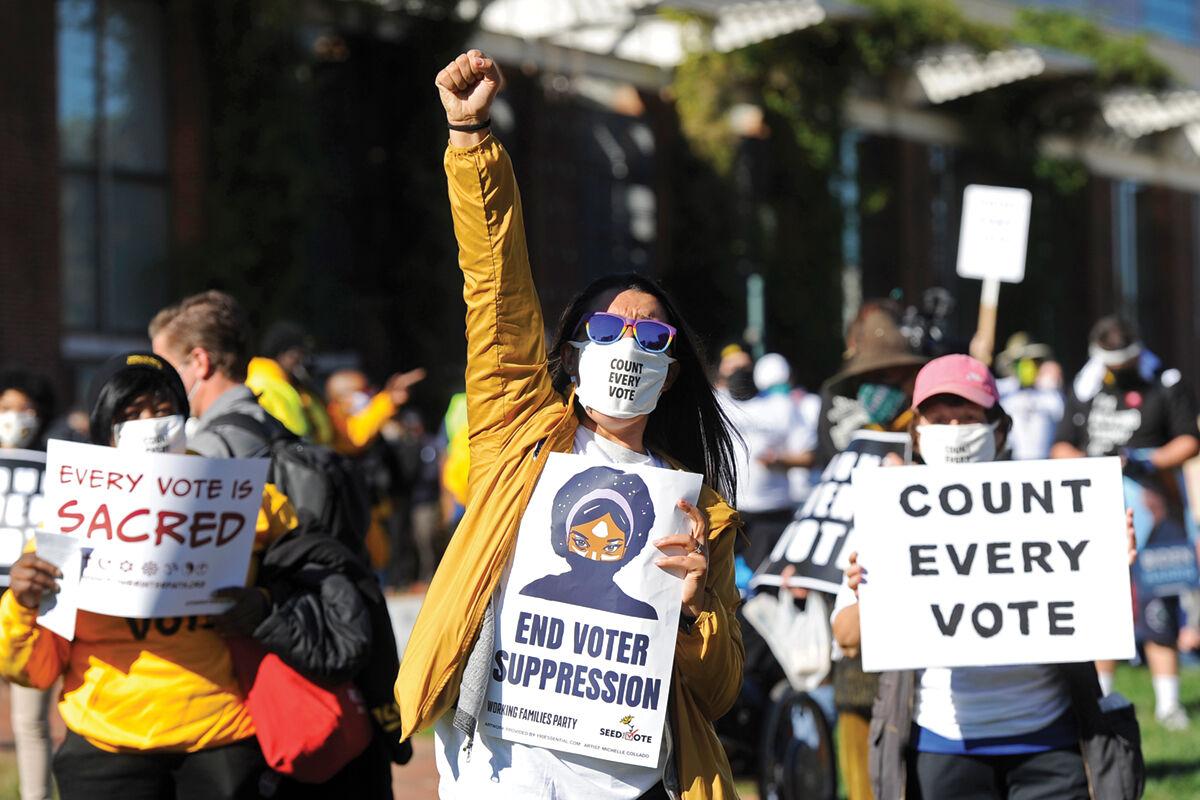 People listen and react to speakers during a count every vote protest at Independence Mall, Tuesday, Nov. 4, 2020, in Philadelphia. 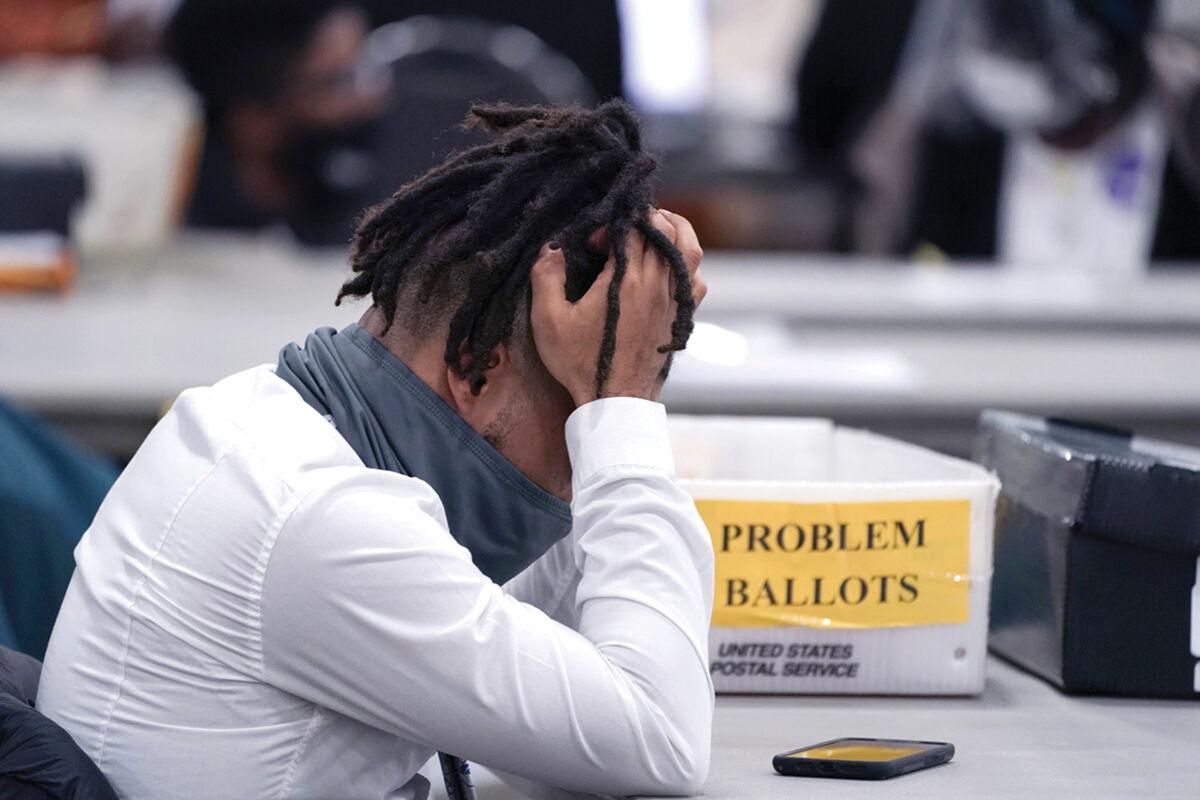 An elections worker rubs his head in the closing hours where absentee ballots were processed at the central counting board, Wednesday, Nov. 4, 2020, in Detroit. 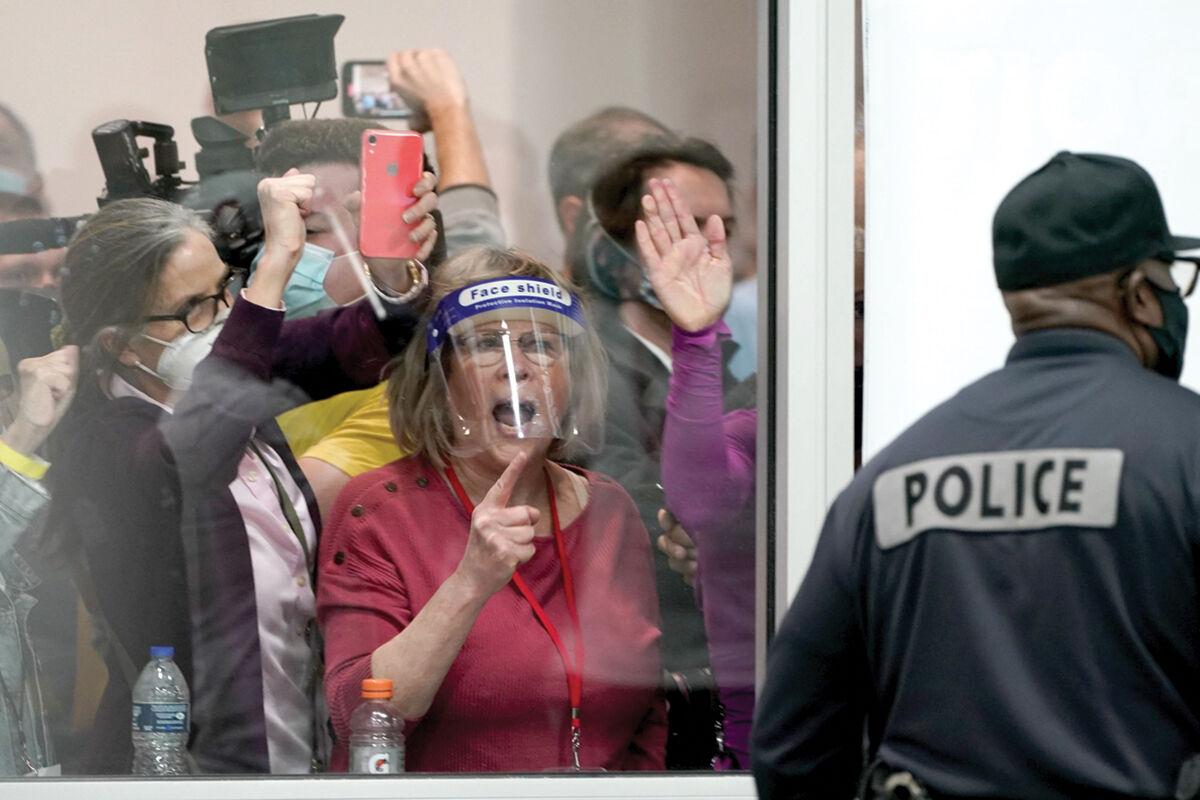 People yell as they look through the windows of the central counting board as police were helping to keep others from entering due to overcrowding, Wednesday, Nov. 4, 2020, in Detroit. 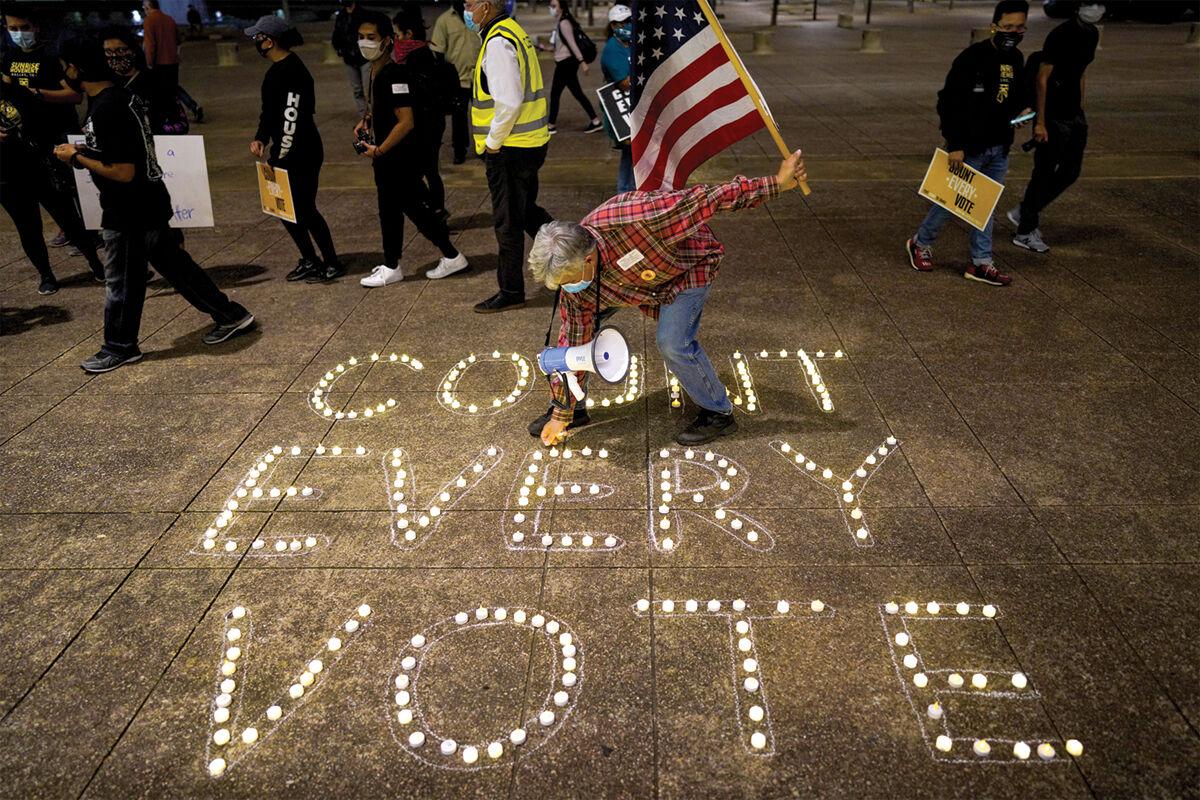 Benny De La Vega carries the American flag as he places candles on the words “Count Every Vote” marked in chalk on the pavement during a rally at Dallas City Hall to demand all votes be counted on Wednesday, Nov. 4, 2020, in Dallas. 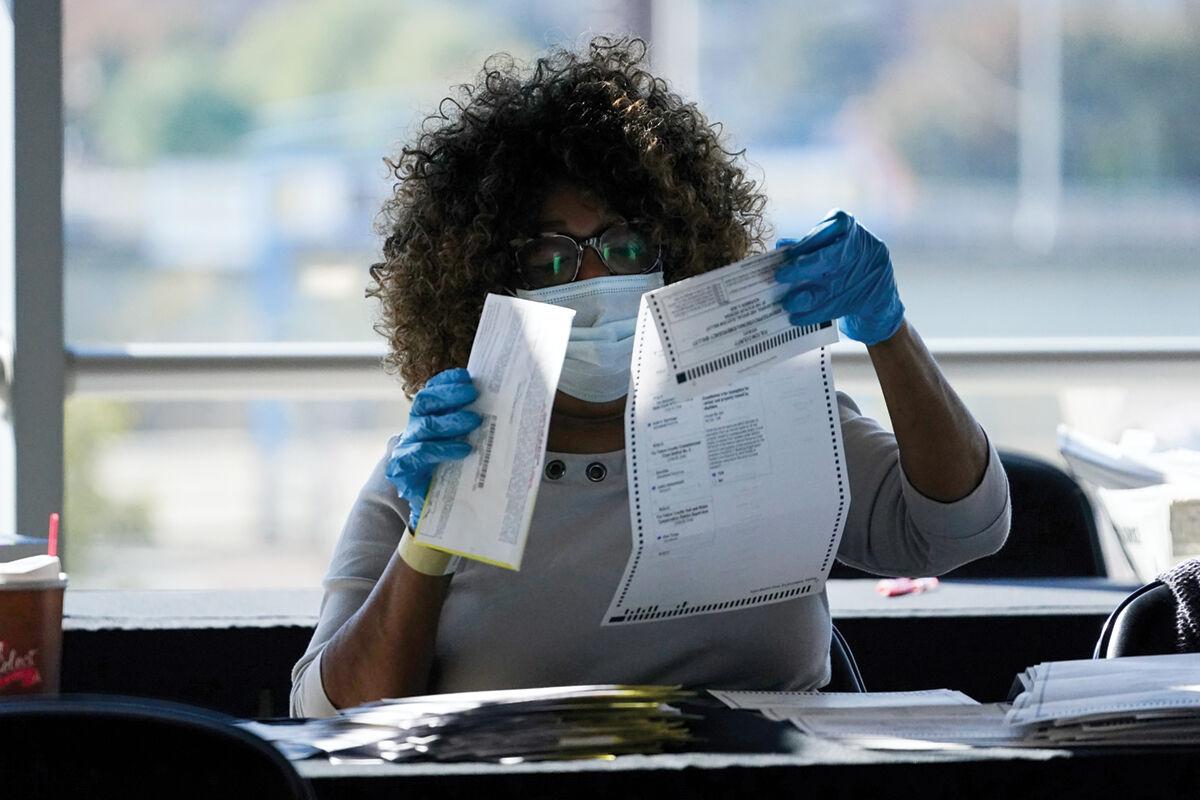 An election staffer examines a ballot as vote counting in the general election continues at State Farm Arena, Wednesday, Nov. 4, 2020, in Atlanta. 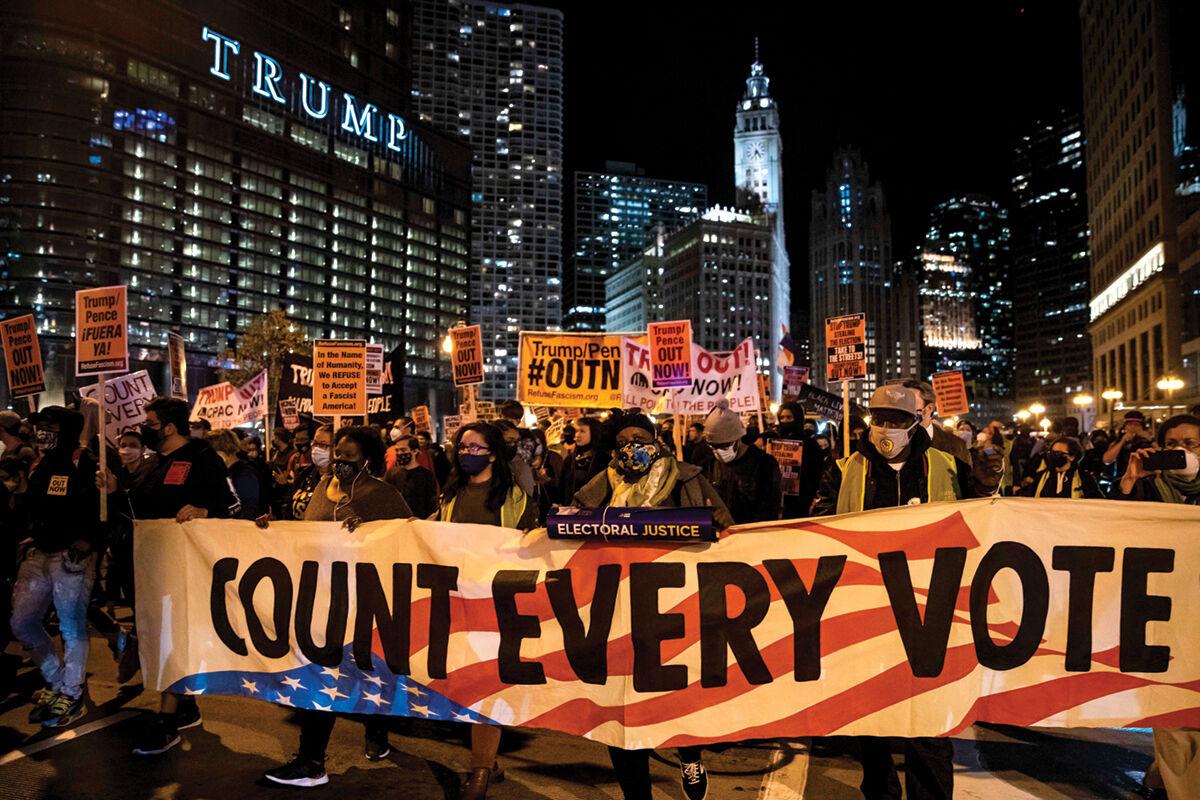 Protesters march through the Loop to demand every vote be counted in the general election, Wednesday night, Nov. 4, 2020, in Chicago,

as President Donald Trump tries to stop the effort in key battleground states.

As the U.S. waited for the full results of the presidential election, some protesters demanded that ballot counting be stopped, while others took to the streets to urge that every vote be counted.

In Michigan and Arizona, dozens of supporters of President Donald Trump converged on vote-counting centers as the returns went against him in the two key states last Wednesday.

“Stop the count!” they chanted in Detroit. “Stop the steal!” they said in Phoenix.

Meanwhile, thousands of anti-Trump protesters demanding that officials “count every vote” took to the streets from Philadelphia to Dallas and beyond. In New York, hundreds paraded past boarded-up luxury stores on Manhattan’s Fifth Avenue, and in Chicago, demonstrators marched through downtown and along a street across the river from Trump Tower.

The protests came as the president insisted without evidence that there were major problems with the voting and the ballot counting, and as Republicans filed suit in various states over the election.