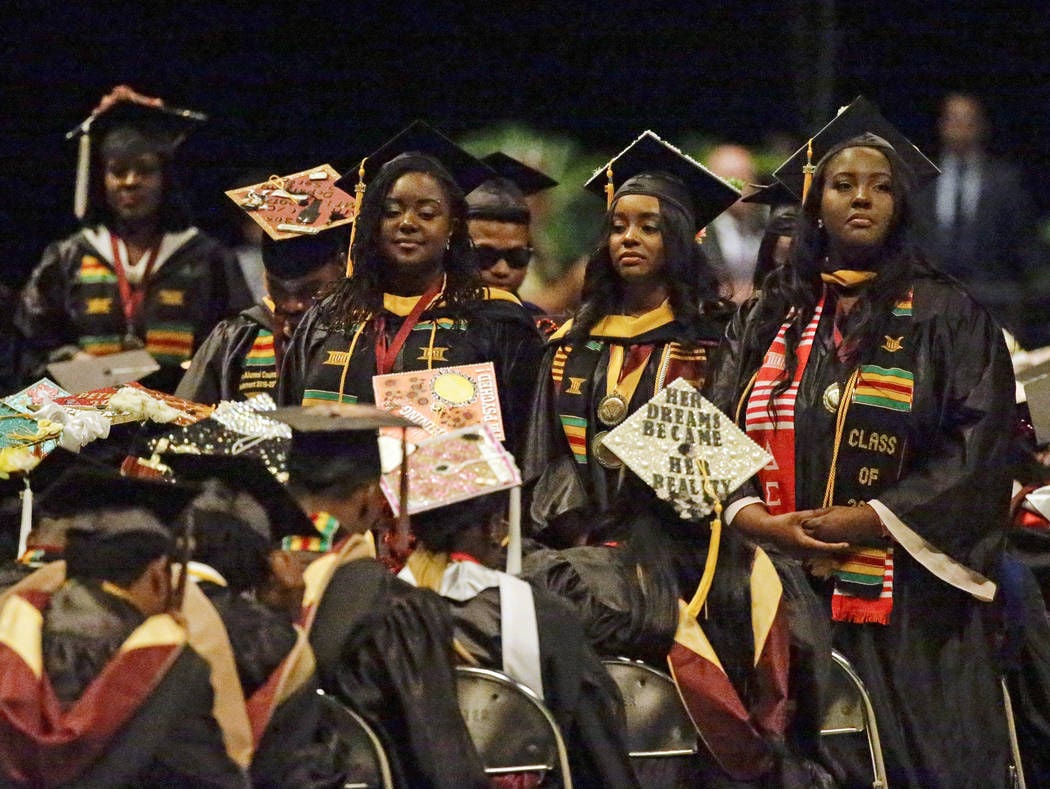 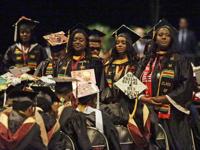 A group of students stand and turn their backs during a commencement exercise speech by Education Secretary Betsy DeVos at Bethune-Cookman University, Wednesday, May 10, 2017, in Daytona Beach, Fla. 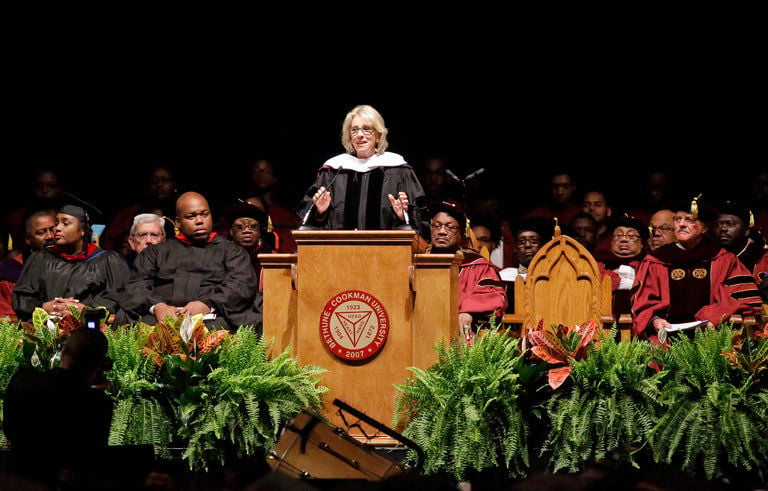 A group of students stand and turn their backs during a commencement exercise speech by Education Secretary Betsy DeVos at Bethune-Cookman University, Wednesday, May 10, 2017, in Daytona Beach, Fla.

DAYTONA BEACH, Fla. (AP) — Drawing shouts of "Liar!" and "Just go," Education Secretary Betsy DeVos continued to deliver her commencement address Wednesday at a historically Black university, even as many of the graduating students turned their backs to her in protest.

"Let's choose to hear one another out," DeVos said, reading her prepared text in a measured tone despite continuing waves of boos, catcalls and scattered applause at Bethune-Cookman University in Florida.

As the crowd kept trying to shout her down, university president Edison Jackson briefly took over the microphone to sternly lecture the class of 2017.

"If this behavior continues, your degrees will be mailed to you. Choose which way you want to go," Jackson warned.

Holy cow, #bethunecookman dean interrupts DeVos speech, threatens students "your degrees will be mailed to you!" They persist! pic.twitter.com/nkcqZrbXJ0

DeVos alienated many African-Americans in February when she described historically Black colleges as "real pioneers when it comes to school choice." After a storm of criticism, she acknowledged that these colleges were "born, not out of mere choice, but out of necessity, in the face of racism."

In her keynote, DeVos repeatedly praised the school's founder, Mary McLeod Bethune, as someone who "refused to accept systemic and repulsive racism," and had "the courage to change old ideas."

"I am here to demonstrate in the most direct way possible that I and the administration are fully committed to your success and to the success of every student across this great country," she said.

President Donald Trump's nomination of DeVos, a Republican fundraiser with no classroom experience, was so controversial that Vice President Mike Pence had to cast a tie-breaking vote for her Senate confirmation.

Some leaders of historically black colleges and universities later expressed dismay when Trump invited them to the Oval Office for a "listening session" that became an apparent photo-op for Black History Month.

DeVos has continued since then to cite historically black colleges as examples of alternative options for quality education, her stated goal for promoting the diversion of tax money from public schools to private companies and charters.

In her speech, DeVos praised Bethune-Cookman for providing the means to help its students overcome adversity and serve others.

"We should aspire to make all of America's institutions mirror that model — a singular focus on the unique needs of students," she said.

The booing became an uproar again mid-speech, when DeVos said she would be visiting the grave of the school's founder.

Alumni Shakindra Johnson and Neema Ramsay said it should have been a proud day for the students and their families, but instead, DeVos seemed to be trying to appropriate the legacy of the school's founder.

"I think Betsy forgot her name was Betsy and not Mary McLeod Bethune," said Johnson, a 2008 grad.

Some alumni and African-American leaders had called the invitation insensitive and misguided. Students gathered petitions demanding she not be allowed to speak. Before the address, activists lined a sidewalk. One sign said "DeVos is not worthy."

Jackson had been accused of selling out the school by inviting DeVos. He gave her a hug and then took back the podium as she left the stage.

"As we have said repeatedly, be careful of the people you let in your place," Jackson said, seeming to acknowledge the criticism. But, he said, "Bethune-Cookman University can't do it alone. We need everyone to be a part of this continuation of our institution."

Some students agreed with Jackson, that the school needs help from anyone offering it, no matter their party affiliation.

"DeVos was here to hear our differences and at the end of the day I think that's what happened," added Keith Holt, who received a master's degree in transformative leadership.

In a statement afterward, DeVos said she respected the attendees, "including those who demonstrated their disagreement with me. While we may share differing points of view, my visit and dialogue with students leaves me encouraged and committed to supporting HBCUs."