Skip to main content
You are the owner of this article.
Edit Article Add New Article
You have permission to edit this article.
Edit
About Us
News
Opinion
Business
Living Black
Sports
Obituaries
Digital Edition
Subscribe
ADVERTISE WITH US!
Share This
1 of 2 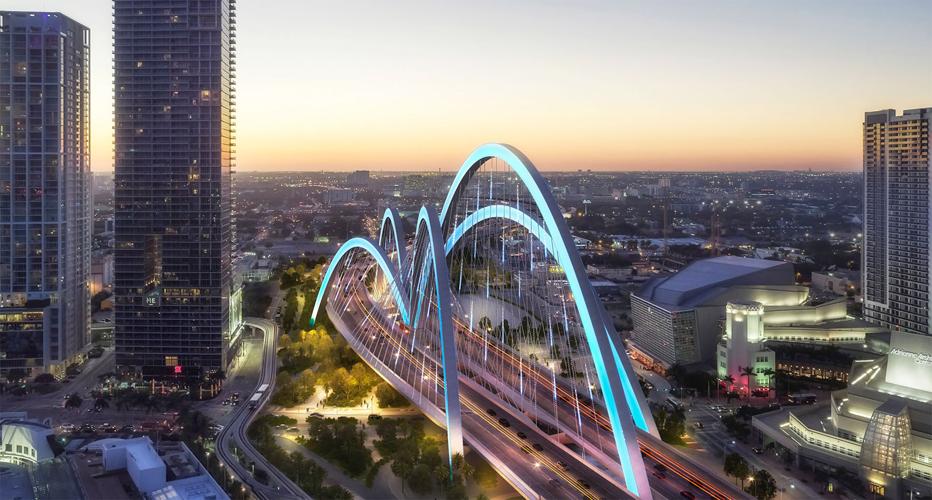 FDOT’s $800 million project to improve traffic and restore Overtown includes a signature bridge. Pictured above is the bridge proposed by the project winner, Archer Western-de Moya. 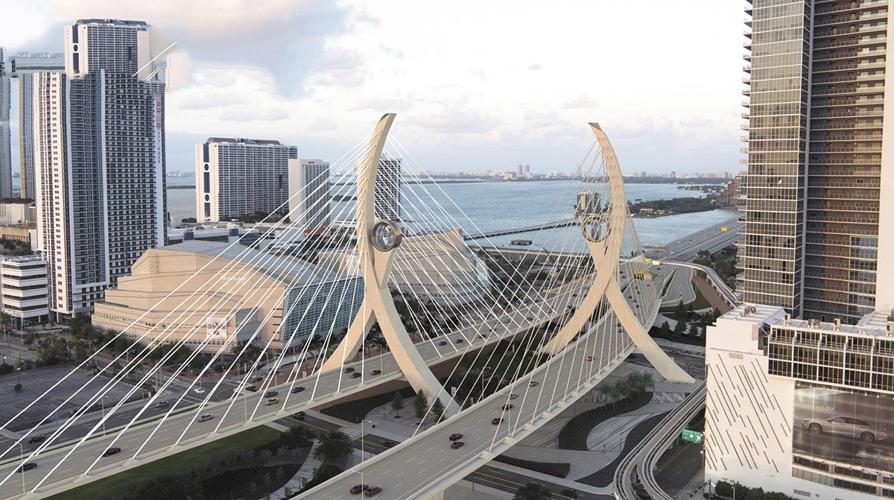 The bridge above, is created by Fluor-Astaldi-MCM, which has filed a bid protest.

The Florida Department of Transportation project to reconnect Overtown to Biscayne Bay and restore the community decimated by interstate highways is caught in a squabble with the company who lost the bid to build it.

Fluor-Astaldi-MCM, which lost the bid to steer the $800 million project by half a point, has told FDOT it plans to protest the results, through a bid protest. It has 10 days from its May 17 filing of the notice to FDOT.

Bridge builders Archer Western-de Moya won the FDOT bid May 12 to complete the project that it says has been 25 years in the making. The project involves easing traffic snags on the State Road 836 and Interstate 95, a “signature bridge” and extensive improvements for the Overtown area.

Robert A. Linares, senior vice president, at Metric Engineering Inc., which designed the winning bridge, said he was instrumental in getting FDOT to not only solve the traffic problems above ground but to also include plans to restore the community under the bridge. Linares was a consultant for FDOT in 1999 and said he told FDOT that the project should include environmental justice by restoring Overtown.

Fluor-Astaldi said that FDOT’s process of selecting the winner diluted the voice of the community. Town Square Neighborhood Development Corp., a not-for-profit group that serves as a watchdog of areas around the Arsht Center and Miami’s cultural corridor, has expressed displeasure.

When I-395 was constructed it mowed down homes and blocked Northwest Second Avenue, the heart of the community at the time. Today the pilings that hold up the interstate leave the area dark and dingy where no foliage can thrive.

“This project has been on-going for the past 25 years, and this community has been waiting for 50 years for I-395, what has for decades been a symbol of divisiveness to be torn down and rebuilt with a legacy project that will continue to help spur economic development and revitalization of this historic community,” said Linares. “I am in support of the FDOT process and look forward to FDOT moving forward with this transformative project for our community.”

FDOT’s project selection team, who looked at technical and design elements, included: Miami-Dade Commissioner Audrey Edmonson, M. John Richard of the Adrienne Arsht Center for the Performing Arts, Alyce Robertson of the Downtown Development Authority, Alberto Parjus from the city of Miami and FDOT employees. On the technical proposal, Archer Western-de Moya received 53.980 points; for aesthetics, 24.389; for the amount of time it will take to be completed, 5.000 and 4.999; for the price of completing the project, giving it a total score of 88.368. The second-place finishers, Fluor-Astaldi-MCM received 50.180; for technical aspects, 24.389; for how the project looks, 4.999; for the cost and 4.000; for the proposed time to complete, giving it a total score of 87.835.

“Elections are won by one vote,” said Miami Mayor Tomas Regalado, who, along with former Commissioner Marc Sarnoff, sued FDOT in 2013 about the project because they said that FDOT was presenting an ordinary bridge as part of the roadway improvements, commonly known as the I-395 Project.

What Regalado wanted was “something that would make Miami’s skyline,” he said. He said the rules are in place that FDOT keeps the winning designs secret until there is a selection, and that nothing is wrong with the process.

Included in the winning design is a bridge that looks like a fountain. It mirrors a fountain that would it in the middle of a planned plaza in Overtown. There are plans for a heritage trail that will run under the bridge all the way to Biscayne Bay; a 55-acre park; a heritage wall; a play area; a garden; and an amphitheater. Lighting under the bridge will cost $20 million. Overall, $100 million will be spent restoring Overtown.

The Archer Western-de Moya plan includes demolishing the part of I-395 that sits just 19 feet above Overtown. The plan is to replace the bridge to heights up to 63 feet, which would allow for natural light and vegetation to grow.

“This project is not just about a bridge that will be an icon in front of the Performing Arts Complex, it is also about the millions of Miami-Dade County residents and visitors that will experience the newly created environment under the bridge,” said Ron Frazier, an architect who said he came out retirement to guide Archer Western-de Moya on the cultural aspects of the project. “It is also about the catalyst that will assist in providing a legacy for Overtown. Many people on the east side only see this project as the front yard for the performing arts complex and Overtown as the backyard.”

Frazier underscored what Linares already knew from having an office in Overtown for many years: Overtown’s restoration needed to preserve the culture of the community.

The second-place finisher, whose bridge likens a dancer, said that its approach to the design is a “holistic approach to the sculptural design of signature bridges, blending structure and symbol, form and function,” said Linda Figg, president and CEO of FIGG Bridge Group, the designer for Fluor-Astaldi-MCM.

Plans for Overtown include landscaping and park space and introduces a musical theme, “by celebrating jazz . . . in the form of large scale abstract musical instruments that are interwoven into the landscape: trumpet, sax, base, drums, clarinet and more.” There are plans to remove walls to reconnect areas; create two acres of green space and parks with “multiple performance stages and musical event areas.” There are plans to raise the height of the bridge between 30 and 54 feet. Splash areas, vendor facilities, art, a garden and outdoor furniture will pepper the landscape. Pathways leading to the bay will be installed.

“We tied in exciting family elements to the overall structure by designing a splash pad near the Overtown Youth Center in additional to musical play equipment and playground and outdoor gym equipment,” Figg said.

Ivette Ruiz-Paz, a FDOT spokeswoman said it received the intent to protest the award from Fluor-Astaldi, and the challenge would be “handled through the administrative hearing process.”