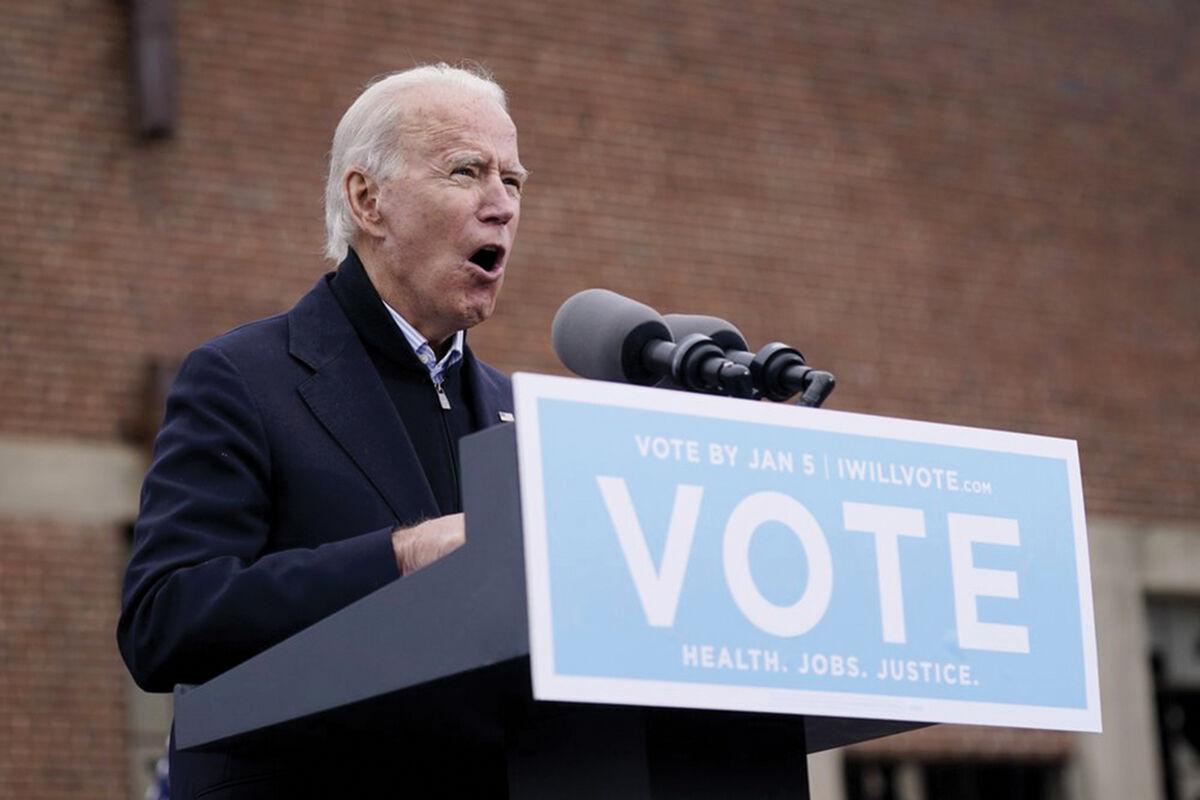 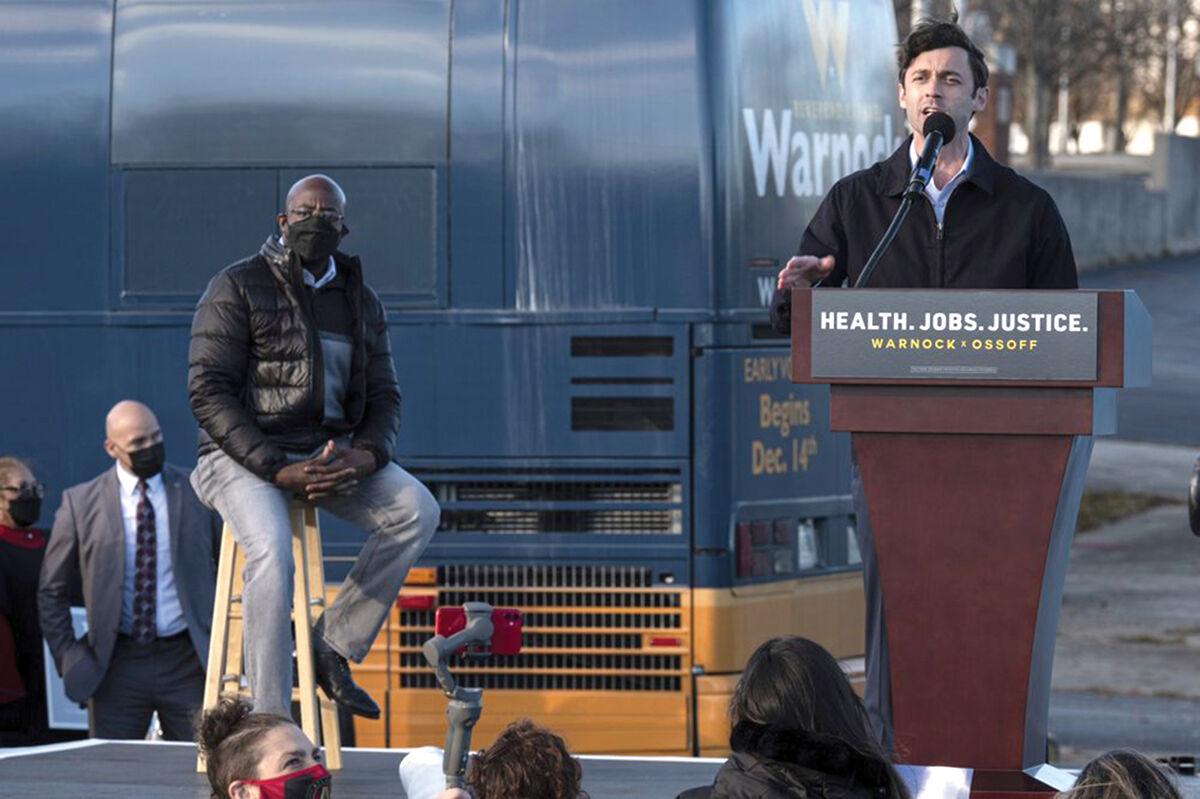 Democratic Georgia Senate challenger Jon Ossoff addresses supporters during a rally with Rev. Rafael Warnock in Atlanta on the first day of early voting for the senate runoff Monday, Dec. 14, 2020. 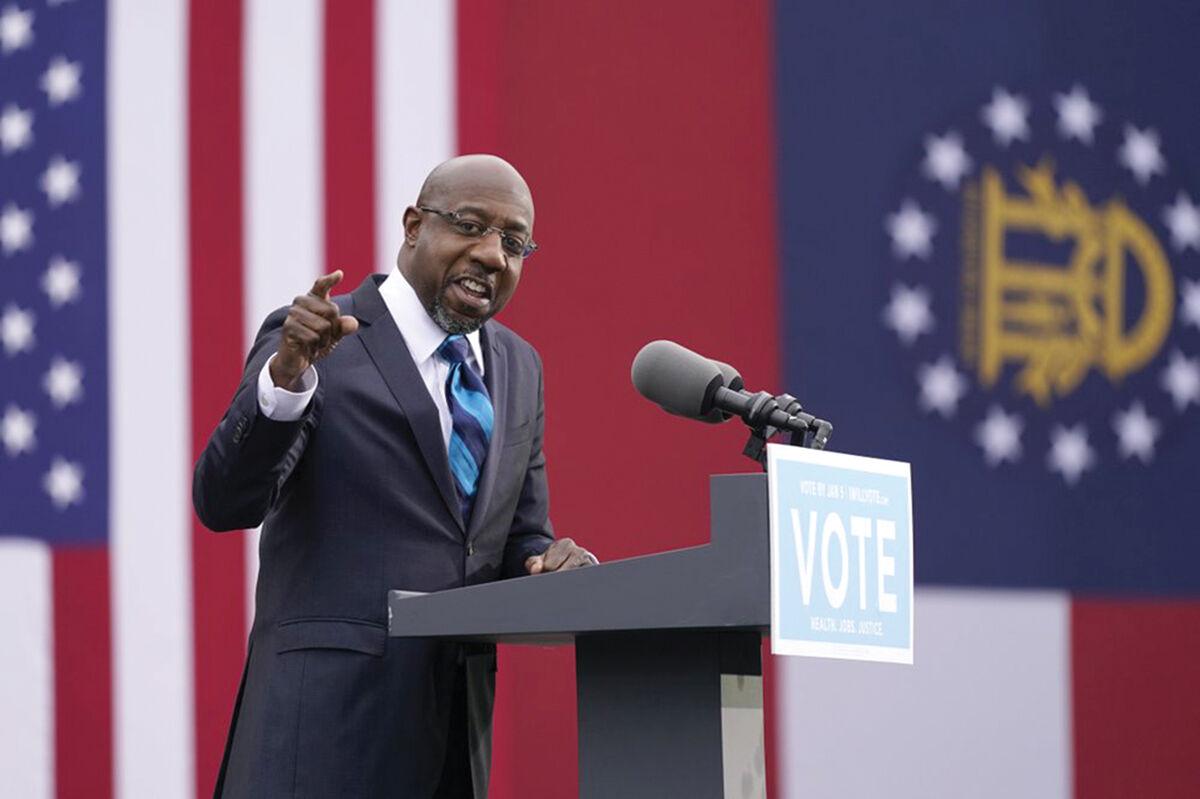 President-elect Joe Biden told Georgia voters on Tuesday that they must deliver two Democratic Senate runoff victories in January so his administration can forcefully confront the coronavirus pandemic and other national challenges.

Fresh off the Electoral College affirming his victory, Biden campaigned alongside Jon Ossoff and Rev. Raphael Warnock as they try to unseat Republican Sens. David Perdue and Kelly Loeffler in Jan. 5 runoff elections that will determine which party controls the Senate. The president-elect warned that Republican victories would leave him to face the kind of GOP obstruction that hampered former President Barack Obama for most of his two terms.

“I need two senators from this state who want to get something done,” Biden said at a drive-in rally near downtown Atlanta, criticizing Perdue and Loeffler for not supporting a sweeping new economic aid package as the coronavirus pandemic surges.

“Are you ready to vote for two United States senators who know how to say the word ‘yes’ and not just ‘no’?” Biden said.

Hours earlier in Washington, Republican Senate Majority Leader Mitch McConnell acknowledged for the first time that Biden had defeated President Donald Trump after spending weeks muted about the president’s false claims that Biden stole the election through widespread voter fraud. In fact, elections officials across the country, including some Georgia Republicans, vouched for the integrity of the voting process and tabulations.

Biden even won Georgia, becoming the first Democratic presidential candidate to achieve victory in the state since Bill Clinton in 1992.

Biden told reporters before traveling to Georgia that he spoke with McConnell earlier Tuesday, the morning after the Electoral College convened in state capitols across the country to affirm Biden’s victory. Biden called it a “good conversation” and said he told the Kentucky Republican that “although we disagree on a lot of things, there’s things we can work together on.”

But in Georgia, Biden urged voters to ensure he doesn’t have to deal with McConnell as majority leader. “What’s the United States Senate doing? Nothing,” Biden said.

Democrats already won a House majority in November. They need to win both Georgia seats to force a 50-50 Senate that would make Vice President-elect Kamala Harris the tiebreaking vote.

Republicans need one of the two Georgia seats for McConnell to remain majority leader and set the Senate agenda.