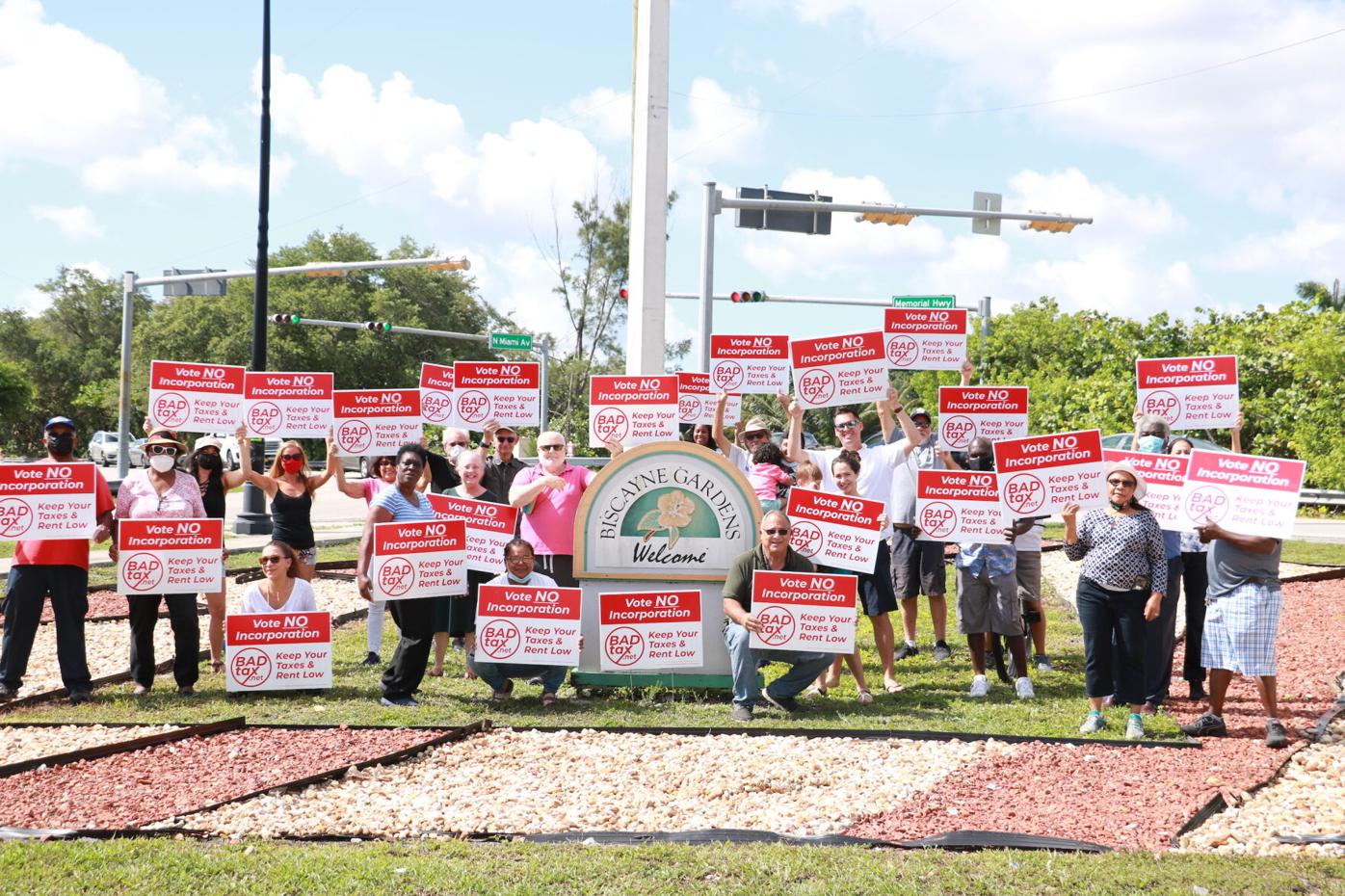 Protestors wave “No to Incorporation” signs at Memorial Highway in Biscayne Gardens May 15, 2021. 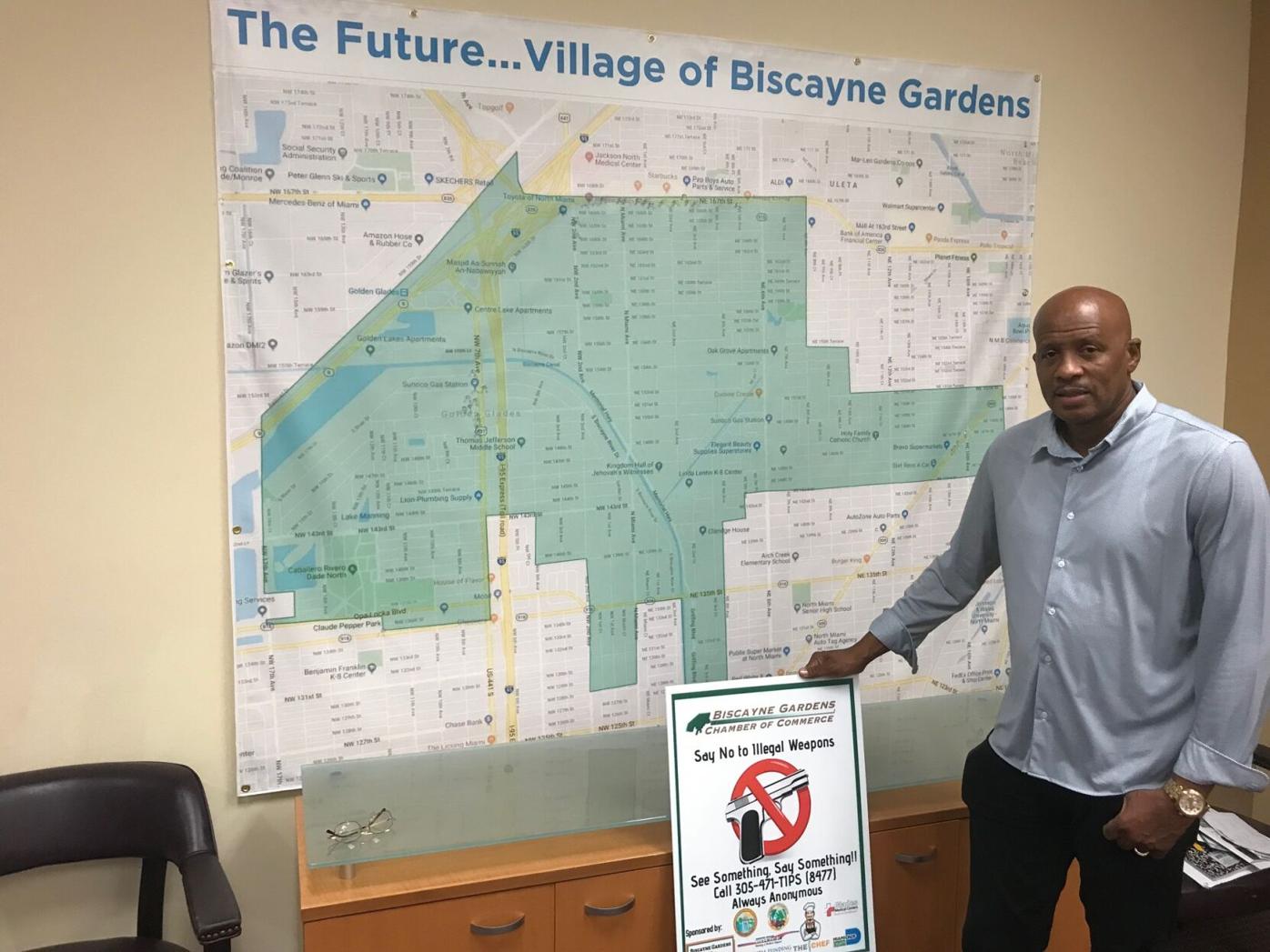 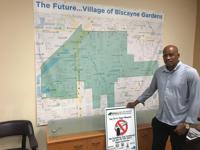 Bernard Jennings, president of the Biscayne Gardens Chamber of Commerce, in front of a map of Biscayne Gardens. He is the strongest advocate and the public face of the pro-incorporation effort./Mark Sell for The Miami Times 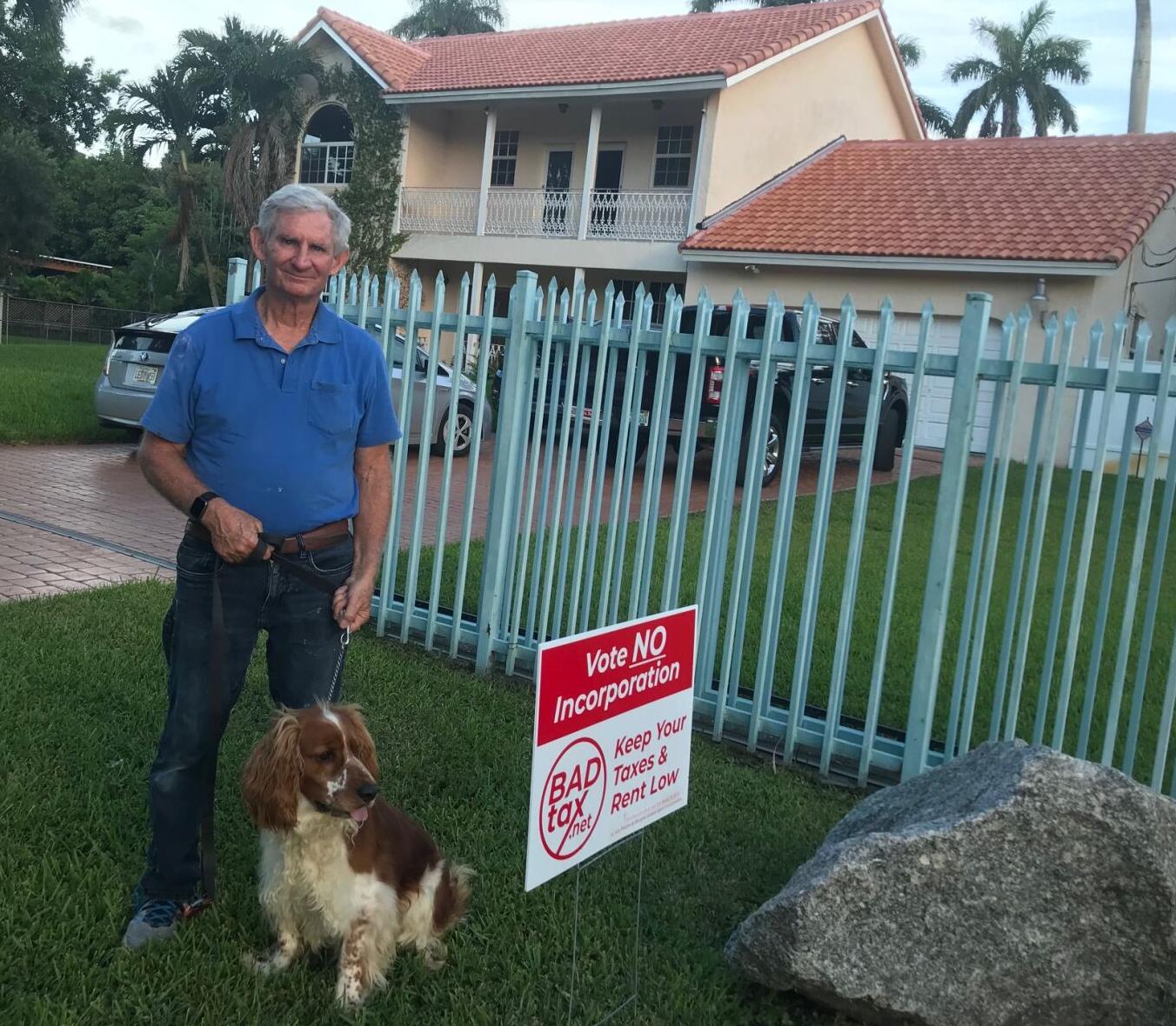 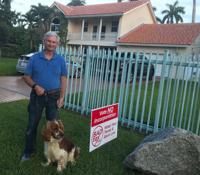 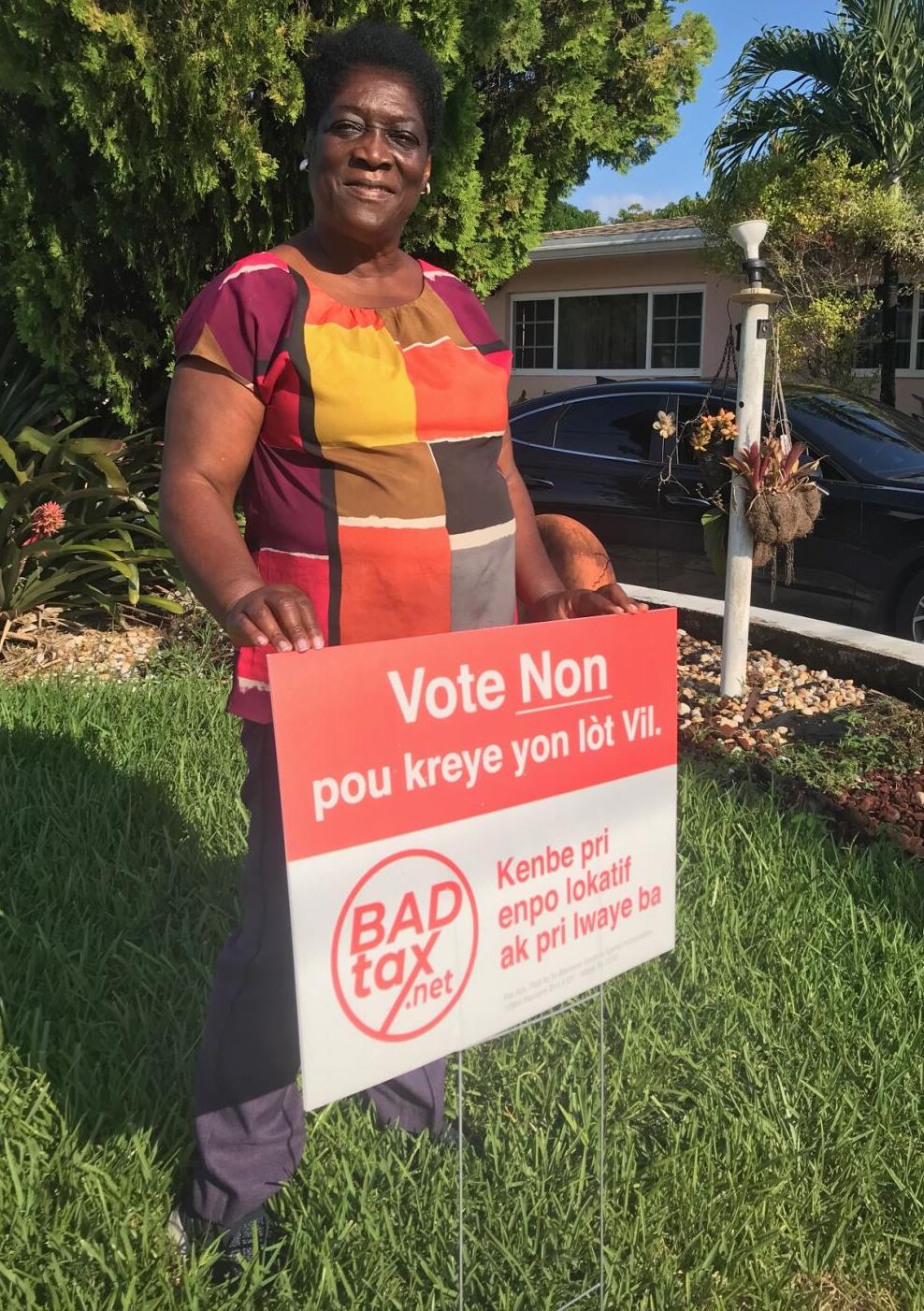 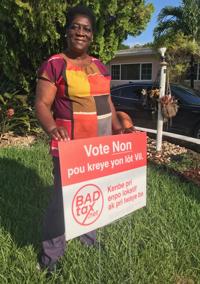 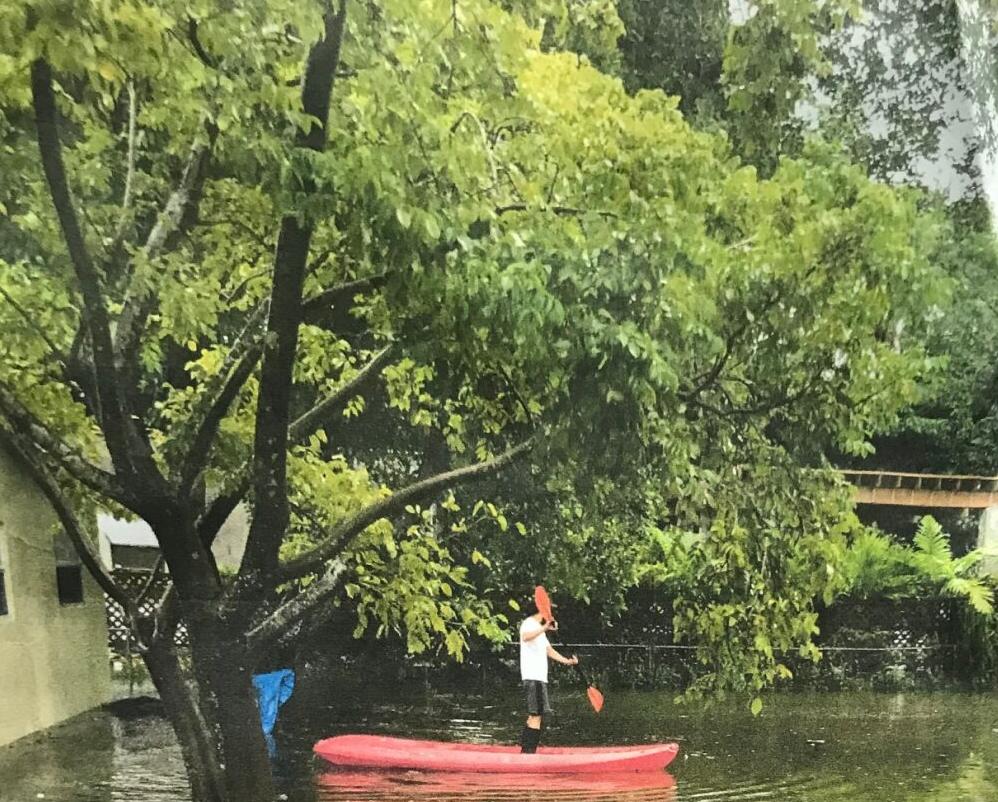 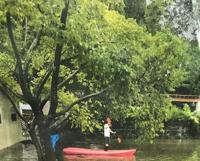 Normally dry land next to Daniel Gualtieri’s house on 152nd Street was submerged during the November king tides. 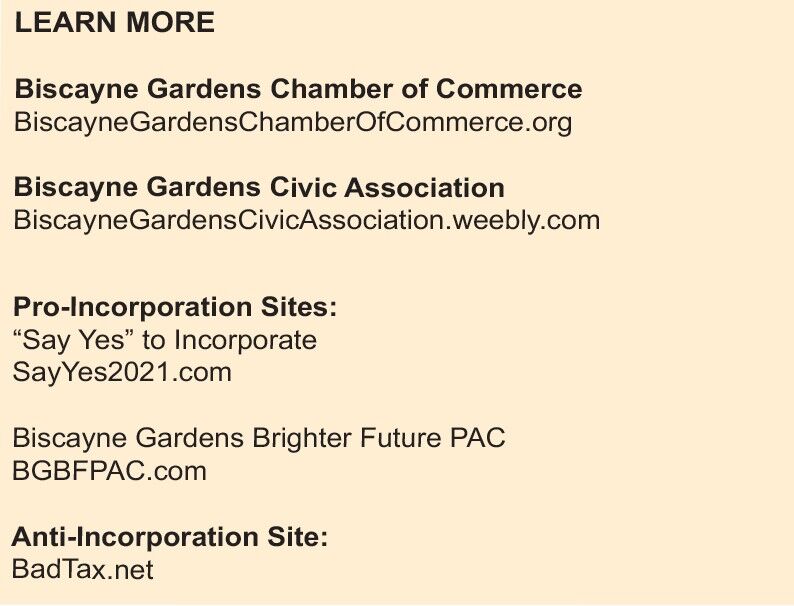 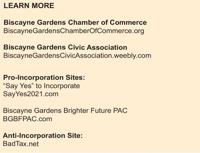 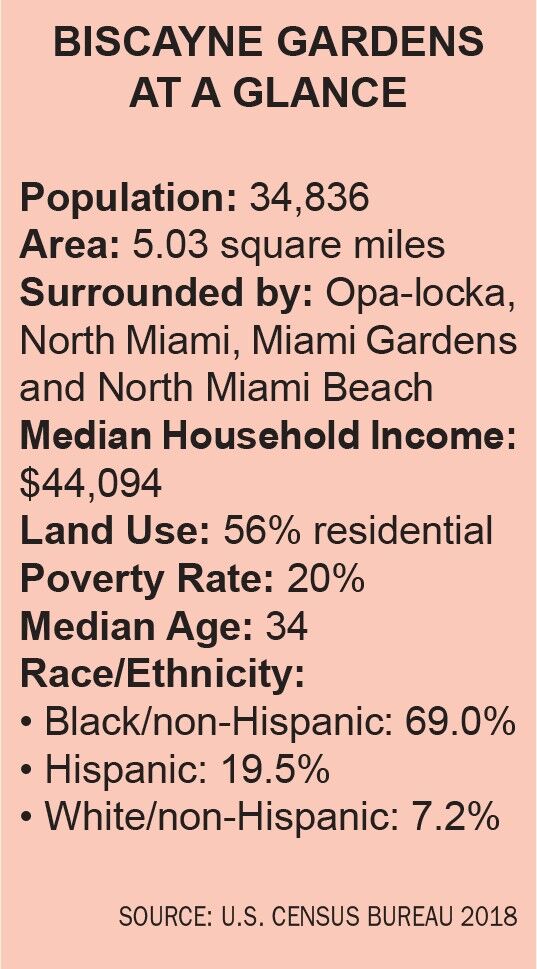 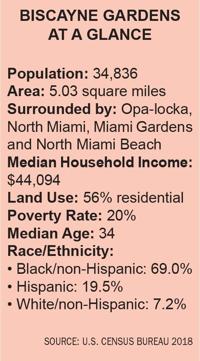 The first clue is the proliferating red-and-white signs: “Vote NO Incorporation. Keep Your Taxes & Rent Low.” More are scheduled to come in Spanish and Haitian Creole. The matter will come before the county commission on Sept. 1, which could then decide whether to put incorporation before the community’s 13,750 voters.

“We would have been better off if we incorporated Biscayne Gardens a long time ago,” said Bernard W.H. Jennings, leader of the effort and president of the Biscayne Gardens Chamber of Commerce, which he co-founded in 2015.

Jennings, 53, has lived in Biscayne Gardens since age 11 and makes his home on the western end, several houses down from District 2 County Commissioner Jean Monestime, who represents the district and has supported incorporation efforts in the past.

Jennings is a certified mediator and government consultant with a winning manner, ready smile, Democratic Party connections and lifelong drive for community service. He has even drawn up a sample city charter with a five-member council, a strong city-manager government and district representation. He has all but declared himself mayor.

Incorporation would give Biscayne Gardens residents more control over the community’s fate, arguses Jennings. He has built a well-organized operation and cultivated supporters. Biscayne Gardens incorporation has been on the burner in one way or another since 2003, with nearly two decades of studies, focus groups, committees and false starts behind it.

As evidenced by the proliferating signs, not everyone buys Jennings’ pitch. Opponents are wary that he is piloting a Trojan horse that would lead to higher taxes and worse services.

Incorporation is just the most visible part of the Biscayne Gardens puzzle. This summer, big disruptors are colliding in this unincorporated community stretching northward roughly from 135th to 167th streets and eastward from NW 17th to NE 18th avenues. If the issue comes to a stand-alone election, perhaps 12-18% of voters will cast ballots, if history and habit are guides. More voters would be likelier, and elections administration cheaper, if the question is piggybacked onto the Aug. 23, 2022, primary or the Nov. 8, 2022, general election.

Demands for workforce housing on eastern Miami-Dade’s few remaining vacant lots are grinding against the realities of climate change, flooding and traffic. In July alone, a blizzard of eye-popping developments got greenlighted: on July 13, the City of North Miami approved four towers of 800-plus units just west of the tracks south of 151st Street in North Miami, and a seven-story apartment tower next to a single-family neighborhood on the 400 block of NE 126th Street. On July 21, the county commission approved 388 units near Biscayne Boulevard and 114th Street, supplementing 400 units that had already been approved.

This summer’s activity takes place against the backdrop of the deadly June 24 Champlain Towers South collapse in Surfside, which spooked condo, real estate and insurance markets, not to mention climate change gentrification that has investors pushing out struggling renters to make money on that extra three or four feet of elevation in Little Haiti, Liberty City and Allapattah.

These dramas resonate in Biscayne Gardens and its tightly-knit, diverse, sometimes quirky neighborhoods of half-acre and acre estate homes, many of which were passed on through generations on self-enclosed oak-lined blocks with a bucolic feel, and lakeside cul-de-sacs amid the scrum of modest dwellings and apartments.

Ground zero this summer is the neighborhood between roughly NW 1st Avenue and I-95, and between the Golden Glades to the north and South Biscayne River Drive to the south.

Here, plans are well along for three big apartment complexes totaling 861 units and a megachurch along the 161st Street corridor from NW 1st Avenue to I-95 between Toyota of North Miami and the flood-stressed estate homes along the canal on North River Drive. As many as 1,520 units and 3,000 parking spaces could rise on this largely vacant and fenced land with scrub palms, perhaps sooner rather than later.

There’s a burgeoning demand for mid-level rentals in greater Miami, by most measures the most rent-challenged place in America, where more than half of all renters pay more than 35% of their income in rent – and many of those a good deal more than half.

The location is prime, near Jackson North, the 183rd Street Publix distribution warehouse, major thruways and the expanded Tri-Rail Station and Intermodal Center. The oft-clogged corner of NW 2nd Avenue and 167th Street funnels traffic to I-95, the Golden Glades, SR 826, Florida’s Turnpike and the new Tri-Rail Intermodal Center.

Trouble is, that particular neighborhood occupies a floodplain, barely three feet above sea level, made inhabitable by two feeder canals in need of dredging, an Army Corps of Engineers pump, seven ditches, retention ponds and French drains. Cement and asphalt push water onto neighbors who do not live atop berms, particularly those just to the south along the canal. After a three-day downpour or during autumn king tides, Biscayne Gardens Park at 151 NW 159 St. is buried in two feet of water. Roughly 75% of Biscayne Gardens is in a flood zone, with a growing array of repetitive-flood-zone properties unsuitable for further building.

“We have a flooding problem that’s only getting worse,” said Marvin Ramsey, president of the Biscayne Gardens Civic Association and a 30-plus-year resident. “This neighborhood was a pass-through to the ocean before everything got settled.”

So will incorporation help? And if so, how? Advocates say incorporation, among other things, would improve zoning oversight and code enforcement, and also help make police more accessible and accountable. They argue, too, that incorporation would inoculate the community from annexation by the surrounding incorporated communities of North Miami (tax rate 7.5 mills going on 7.75 mills, or $7.75 per $1,000 assessed valuation), Opa-locka (9.8 mills), Miami Gardens (6.9 mills) and North Miami Beach (6.2 mills).

Many Biscayne Gardens homeowners like their taxes right where they are – at the standard unincorporated rate just above 1.9 mills. Incorporation, according to a county staff study, would bring that rate up to 4 mills.

Jennings repeatedly asserts that the tax hike would add up to an additional $150 a year for a two-bedroom house assessed at $157,000 – a small price in his eyes for the benefits of local control and oversight.

Incorporation opponents think that number is fanciful at best. They say the area is too heavily residential to support such a low tax base. They question plans for a police department of 26 officers – or less than four per shift – rather than the 60-plus county officers who patrol Biscayne Park from the Intracoastal police station. Jennings counters that the community could rent police services from the county and surrounding communities through competitive bidding and interlocal agreements, rather than get saddled with legacy costs of a stand-alone police department.

Biscayne Gardens includes many affluent homes and estates, particularly in the area just east of I-95. Its overall median household income of $44,094 and its 20% poverty rate is in line with those in North Miami and North Miami Beach. Its population is nearly 70% Black, 20% Hispanic and 7% non-Hispanic white.

About 40% of the population is of Haitian ancestry, higher than North Miami’s and the highest concentration in the United States.

Still, ethnicity is not even a subtext in the battles now playing out over incorporation, development or resilience.

Estomene Dorcely, 70, a retired schoolteacher who operates a construction business, closed on her house on NE 152nd Street in 1988. She was on the original Municipal Advisory Committee (MAC) that set incorporation efforts in motion, but is now opposed.

“I left Haiti because people told me what to do,” she said. “Incorporation does not give us any guarantee we’ll have control. It’s going to be worse if you have a majority taking money from developers to buy elections. Mr. Jennings is not even mayor yet and he’s taking $10,000 from the developer.”

Jennings’ pro-incorporation Brighter Futures PAC indeed received $10,000 from AR 190, developer of a five-story 100-unit complex scheduled to open in early 2023 on the east side of NW 2nd Ave. between 161st and 162nd streets. Townhouses on that property would directly front a single-family home owned by Bruce Lamberto, 68, a retired City of Miami Beach contract administrator, Biscayne Gardens native and incorporation opponent.

Said Lamberto, who actually lives in the Eastern Shores district of North Miami Beach, next to Dezer Development’s planned $1.5 billion project at the current site of Intracoastal Mall, “You may want community housing but you can’t destroy a single-family neighborhood.”

One searing instance happened July 21, when the county commission overrode the objections of more than 20 residents and a community council to approve 425 units at the corner of NW 5th Avenue and 161st Street, developed by BH Montebella, with rentals of $1,300-$1,700 a month. Citing the need for housing, the commission did so rather than wait for the results of 90-day comprehensive studies for flooding and traffic requested by residents and approved by the county July 8. Residents left that four-hour meeting with a bitter taste in their mouths.

Residents did not object, though, to a planned 236-unit Morgan Group project on eight acres just to the south, which has more green space and a water retention pond to minimize the effect on other properties, in line with recommendations from the county’s own Office of Resilience.

Jennings, who shares some reservations about high-density projects in the area, nonetheless argues that the community is better served by working with developers rather than against them.

The bottom line of incorporation is pivotal. Biscayne Gardens actually receives more in county services than it provides. It generates $9.6 million in revenue and the county spends $13.02 million providing services, giving the area a $3.4-million net benefit, according to the county’s staff report. Unlike, say, Aventura or Pinecrest, Biscayne Gardens is a recipient rather than a donor community.

Perhaps for that reason, neighboring cities, with their own financial stresses, have shown little appetite to acquire a largely working- and middle-class community of single-family homes on septic tanks, with more than 100 churches and tax-exempt institutions and relatively little tax-rich commercial property.

Jennings cites another argument for incorporation, saying that the city could better control actions of adjoining municipalities, such as the three-story charter school and 24-unit apartment approved in March by North Miami at the Biscayne Gardens line on NW 17th Avenue between 137th and 143rd streets, not far from Jennings’ house.

For all the conflict, all spectrums of the emerging incorporation debate appear united in a fierce devotion to the community. Biscayne Gardens native Daniel Gualtieri, a 67-year-old pastor and contractor, built his house on a high berm from 1987-90 and has no intention to leave.

“I’m generally happy with the services we have,” he said. “What do you want in a community? Security. You want your garbage picked up and your recycling. You want to maintain a nice environment. I’m happy with my neighbors. We don’t look at the color of our Earth suits. This is my home. My children and grandchildren come here. I’m happy with my taxes. Incorporation wouldn’t improve anything.”

“North Miami just sneaked in a three-story school and a bunch of apartments by 17th Avenue and 135th Street,” she said. “This creates traffic and lots of confusion. Our county commissioners don’t do city planning. No one is in charge of planning our community.”

The months ahead will produce more questions and answers as door-knockers proliferate and both sides polish their cases.