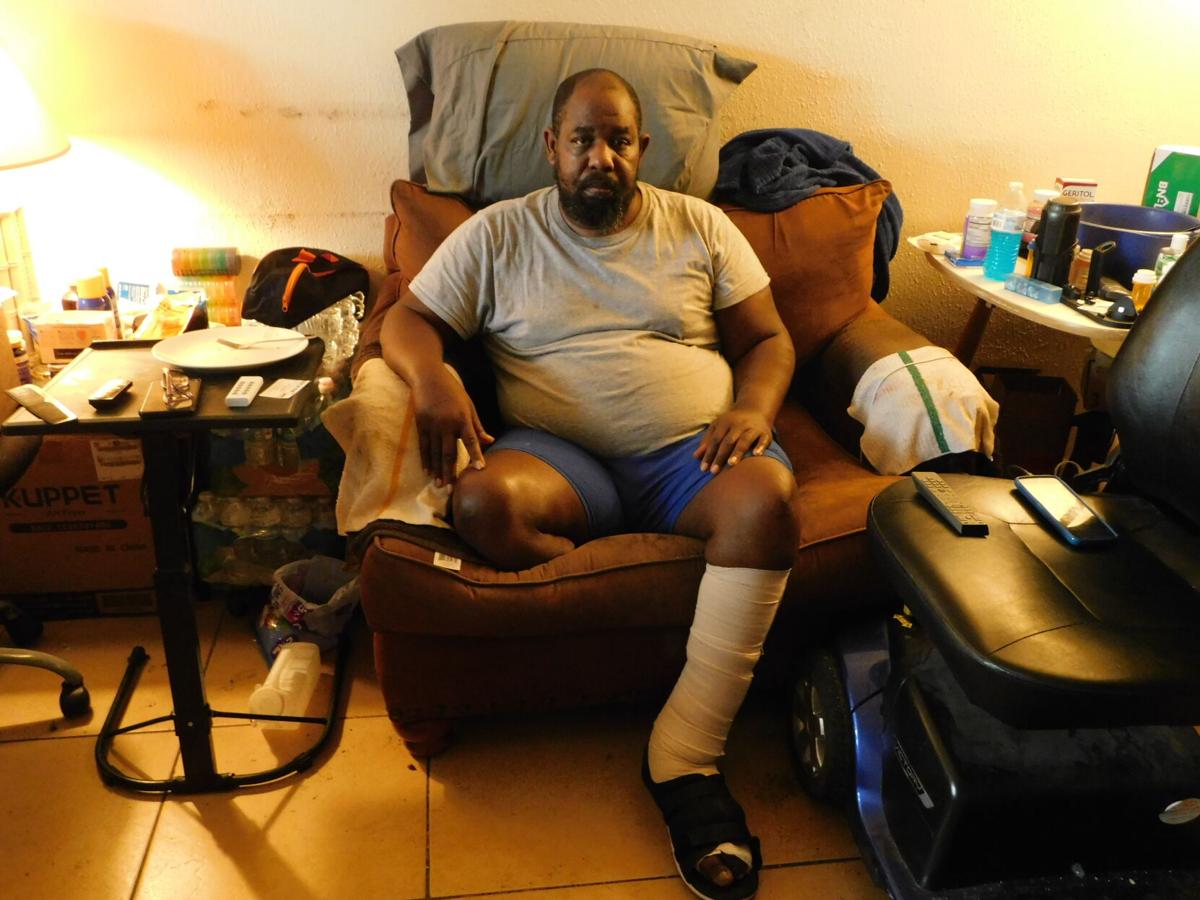 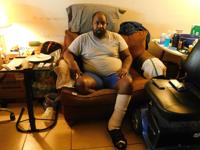 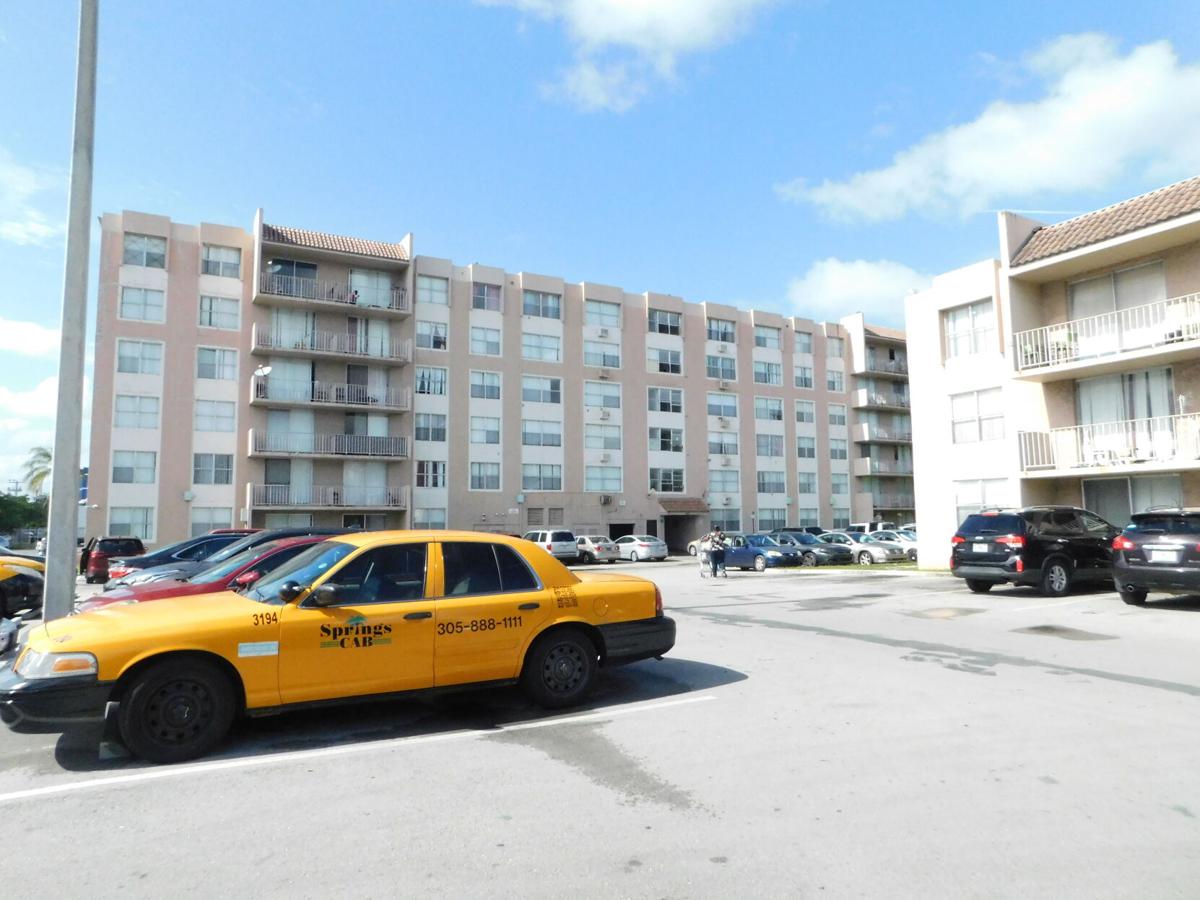 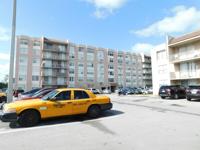 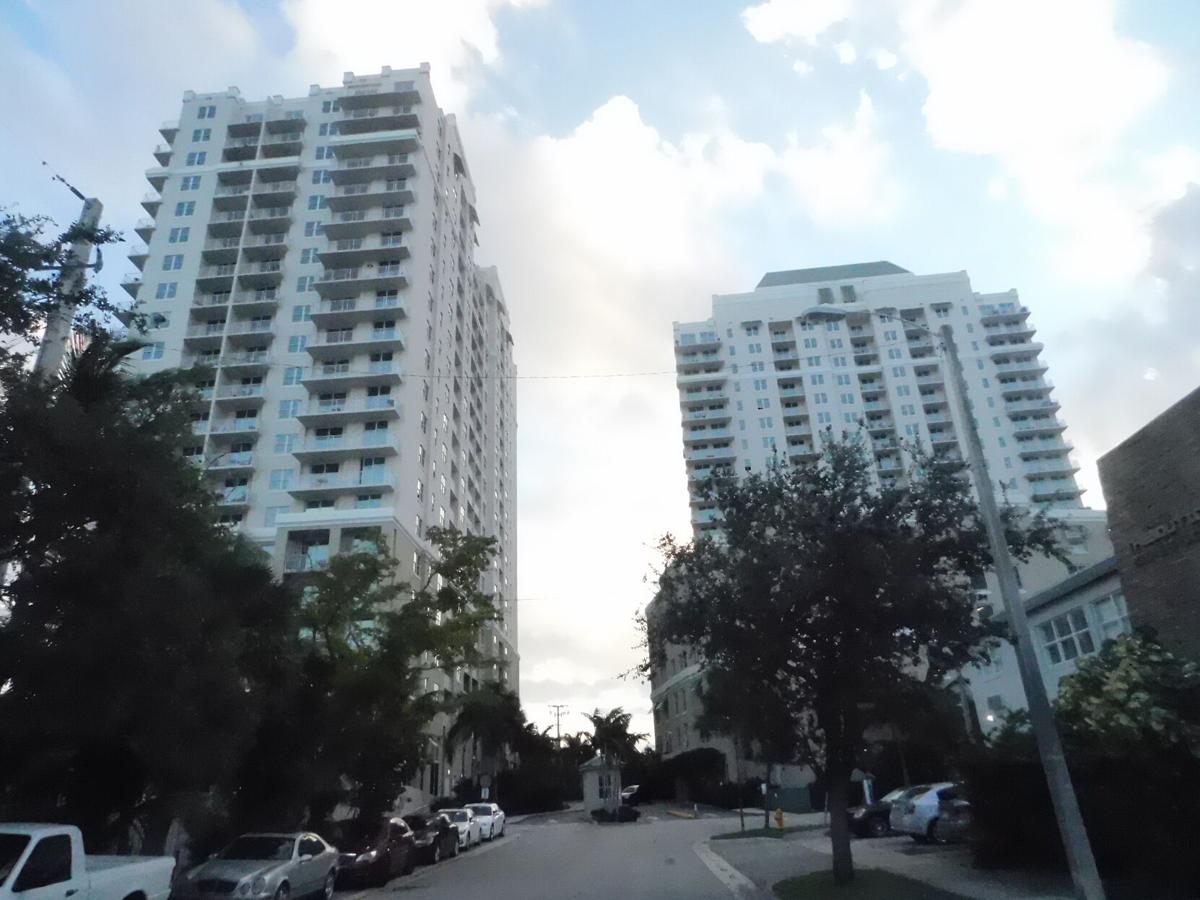 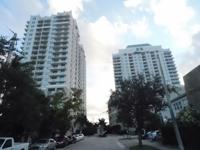 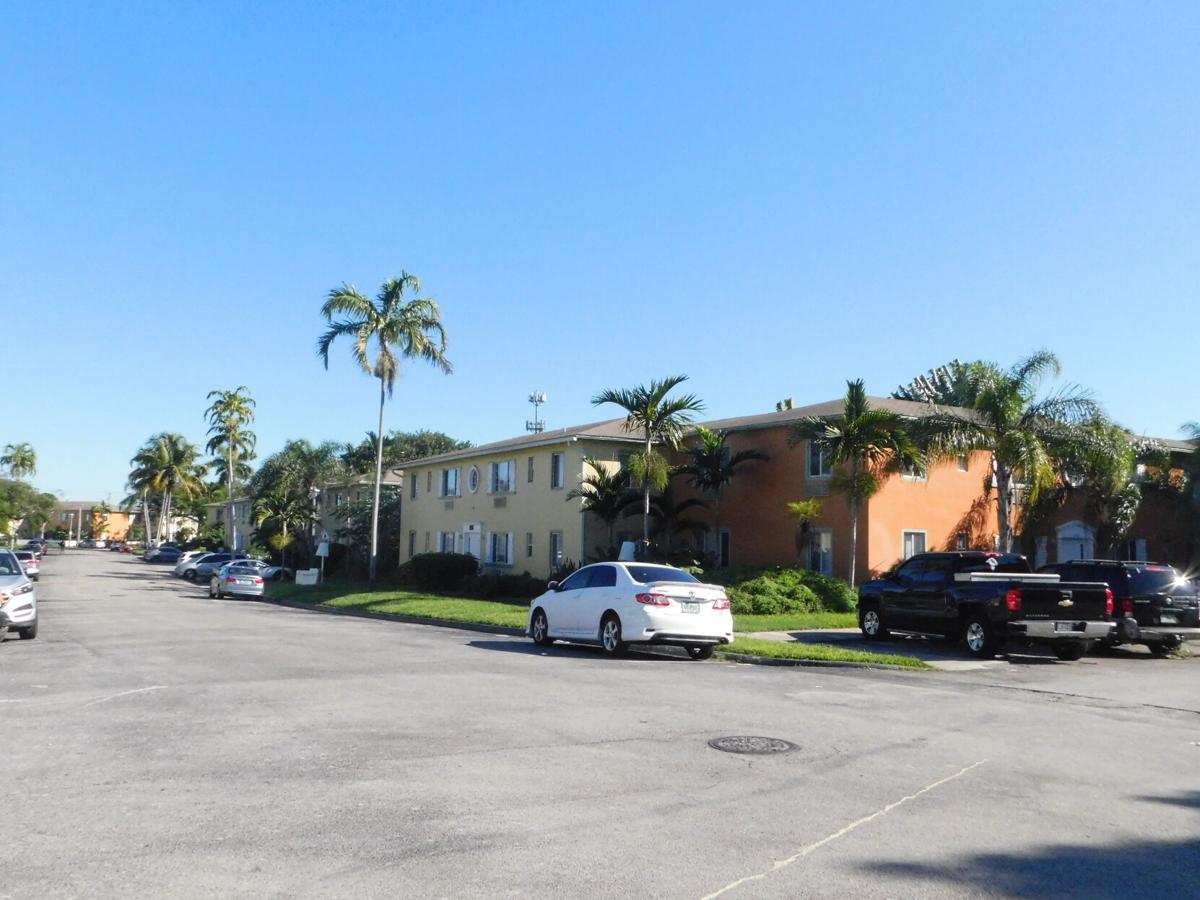 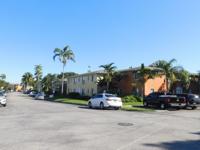 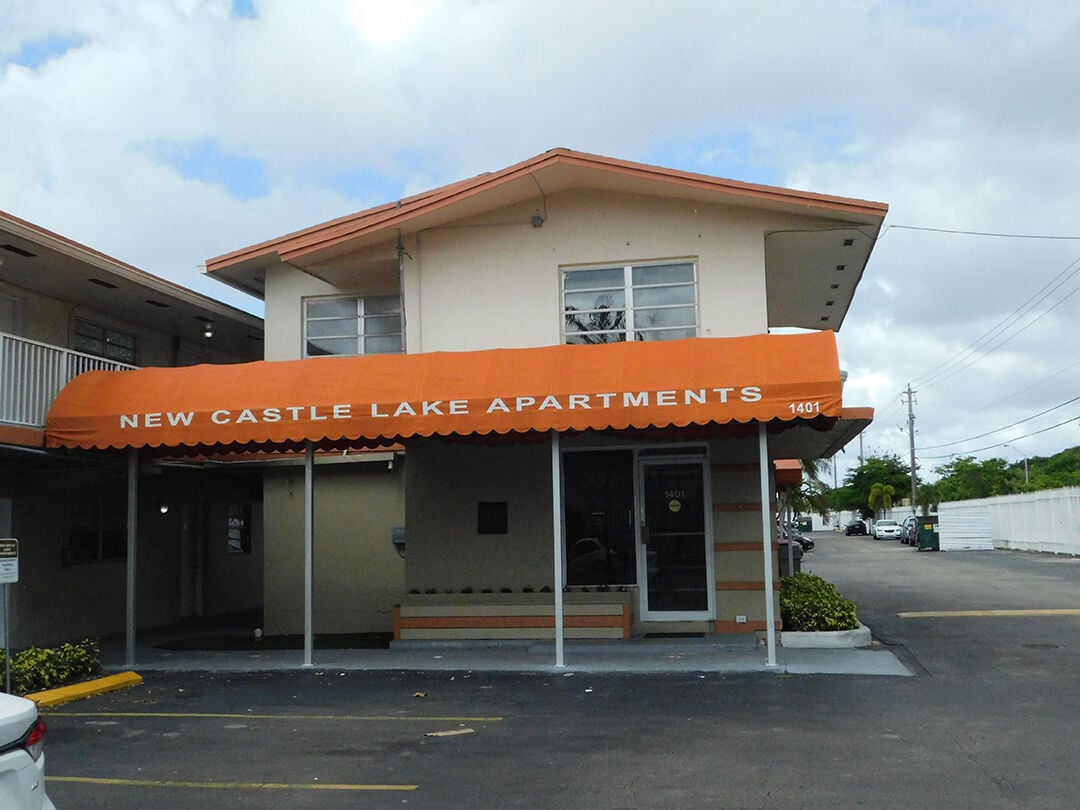 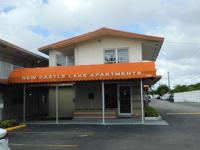 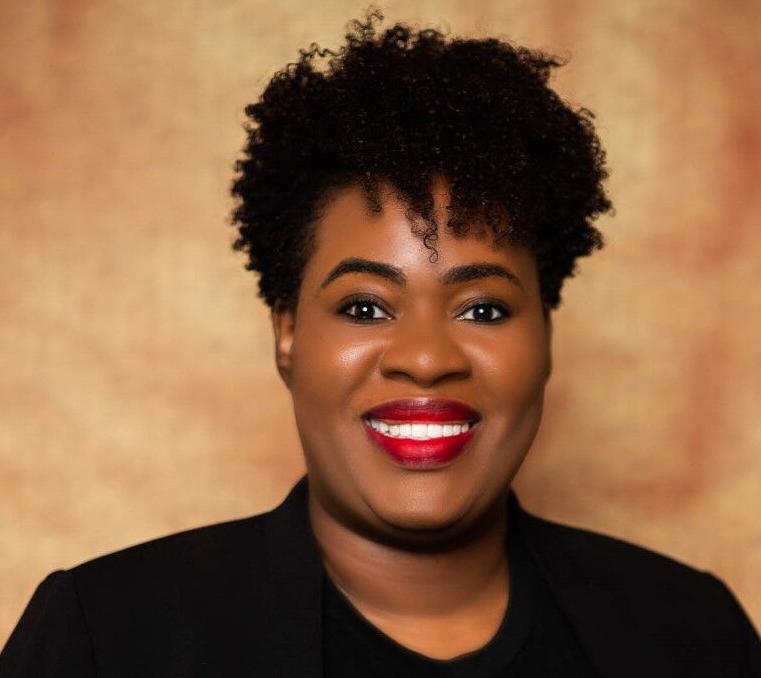 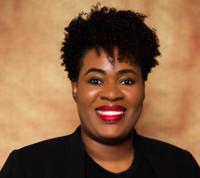 Freddie Davis lost a leg due to complications from diabetes 12 years ago, but it didn’t stop him from hauling freight as a truck driver. What did stop him was COVID-19.

This past August, Davis was laid off by his employer, the same month his landlord raised his monthly rent from $875 to $1,400 for a one-bedroom apartment in New Castle Lake, an apartment complex at 1401 NW 103rd St. in the unincorporated northwest Miami-Dade neighborhood of Pinewood. Owing $6,000 in back rent, Davis now has to be out by June 30 after losing a Zoom eviction hearing.

“Before all this happened, I was paying on time every month,” Davis insisted. “I have no place to go now. The only place where I am going is inside my truck. And I’m disabled.”

Davis said he isn’t alone. All of the neighbors he used to speak to regularly have moved out. Indeed, according to Miami-Dade County records, the complex’s landlord, Newcastle Lake LLC, controlled by Sewessattie Ramsamooj, filed 62 eviction cases since the start of the pandemic in March 2020.

But it isn’t just Newcastle Lake LLC that has filed a slew of eviction cases. In spite of a federal moratorium from the Centers for Disease Control and Prevention on evictions, 11,456 residential and commercial eviction cases were filed with Miami-Dade County’s Clerk of Courts between March 1, 2020, and May 1, 2021, according to a spreadsheet compiled by the Miami Workers Center using Miami-Dade Clerk of Courts data. Roughly 90% of these cases are residential evictions, said Jeffrey Hearne, director of litigation for Legal Services of Greater Miami.

Hearne said the CDC moratorium on evictions has reduced the number of eviction filings in Miami-Dade. However, since this past March, the county has allowed the Miami-Dade Police Department to serve more writ of possessions. Additionally, the CDC moratorium is set to expire on June 30, although it could end earlier since the moratorium is being challenged by landlords in the courts, nationally and locally.

“We are very fearful that we are about to see a huge amount of people, either with eviction filings or writs, where the police department comes and [serves] the 24-hour notice,” Hearne said.

Santra Denis, interim executive director of the Miami Workers Center, a nonprofit that seeks to organize low-income workers and tenants, said Black and immigrant Hispanic tenants have been hit the hardest by the COVID-19 pandemic recession. At the same time, her organization is starting to receive inquiries from middle-class renters, too.

“Many folks are scrambling to figure out what they are going to do,” she said.

Michael Liu, director of Miami-Dade County Public Housing and Community Development, said eviction filings are still low, although they are moving upward. As of mid-May, there were 3,125 writs of possessions issued by the courts – effectively kicking tenants out.

“That number changes. It grows,” Liu said, adding that the administration of Miami-Dade Mayor Daniella Levine Cava is trying to resolve hundreds of those cases before the police come to kick those residents out.

Exacerbating this situation is Miami-Dade County’s ongoing affordable housing crisis. In spite of the pandemic, home prices and property values are rising while incomes are, at best, stagnant. The low incomes and rising cost of living make Miami-Dade County the least affordable place to reside in the nation.

“Sixty percent of households in Miami-Dade County are paying 30% or more of their income on housing … that is the highest in the United States,” Liu said.

A review of statistics supplied by the auditing office for Miami-Dade’s Board of County Commissioners shows that many of the eviction cases filed were in rentals located in ZIP codes east of I-95.

Between October 1, 2020, and March 31, 2021, 122 evictions were filed within ZIP code 33161, in spite of the moratorium. It's the highest number in Miami-Dade County. That ZIP code covers most of southern North Miami, Biscayne Park and various unincorporated neighborhoods. The 33161 ZIP code also is where the highest number of commercial evictions took place, at 13. According to the latest census statistics, the 33161 ZIP is 64% Black and has a median household income of $40,093.

Gepsie Metellus, executive director of the Sant La Haitian Neighborhood Center in North Miami, a Haitian social service organization, said many of her clients in or near that ZIP code are struggling to pay their rent.

“What we are seeing are quite a few people who are scraping together whatever they have to make a payment they can hardly afford,” she said. “They are borrowing, begging, not stealing, wherever they can to pay that monthly payment to protect themselves against eviction.”

Ironically, those renters who do manage to stay current aren’t eligible for rental assistance, which is designed to help payoff back rent.

ZIP codes with higher income brackets have significant numbers of eviction cases, too. There were 97 evictions filed in 33137, a ZIP code that covers part of Little Haiti as well as Buena Vista, Edgewater and the Upper East Side. In this part of Miami-Dade, the area median household income is $63,650.

Followed close behind in fourth place is the 33132 ZIP code, which covers Omni, Park West and the Central Business District. This region, has a median household income of $80,577 and has had 85 eviction cases.

Coming in at seventh place is the 33141 ZIP code that covers North Bay Village and North Beach with 82 cases. The median household income for this sector is $49,861.

But, again, these statistics were collected just between Oct. 1, 2020, when the county started specifying which cases were commercial and which were residential, and March 31, 2021. Eviction cases have been creeping upward since then. For example, in January 2021, a total of 948 residential and commercial eviction cases were filed, a decrease of 40% from the year before. By April 2021 there were 955 cases filed, a hike of 486% from the year prior.

Some landlords and apartment managers have been filing more cases than others. According to the Miami Workers Center, there have been 714 eviction cases filed between March 2020 and May 2021 by the Top 10 eviction filers of Miami-Dade County. A large chunk of those evictions came from buildings located either east of I-95 or in northern Miami-Dade.

YMP Center Court LLC filed 108 eviction actions, the largest volume of any landlord in Miami-Dade County. According to the Miami-Dade Property Appraiser, the company owns Center Court, a 50-year-old apartment building with 588 units at 14695 NE 18th Ave. – less than two miles from Solé Mia, a planned high-end community of 4,000 apartments near Biscayne Bay. A low-income housing tax property, Center Court’s rents range from $922 to $1,305 a month, according to ApartmentFinder.com.

Ralph Godwin, president and chief financial officer of YMP Real Estate Management, said his company has provided Center Court tenants assistance with securing rental assistance, unemployment, IRS refunds and even charitable donations. Godwin insisted his intent is not to throw anyone out.

Rather, Godwin said YMP started eviction proceedings as a means to make sure that those tenants who are behind on their rent make a payment plan with his company. The vast majority of people at YMP Real Estate’s seven Florida apartment buildings have done so, he said, but there is a portion who laugh at the idea of paying rent during overlapping eviction moratoriums enacted by Gov. Ron DeSantis (which expired in October) and the CDC.

“If we have a tenant we are concerned about, we will file an eviction with the full understanding that the file is going to sit there,” he continued. “All it is is a placeholder.”

Should the tenant act in good faith and embark on a payment plan, his company will ask the judge to drop the case, Godwin explained.

Curiously, the second-highest evictor in Miami-Dade is Intercoastal Yacht Club. It filed 96 eviction cases for the 20-story apartment building completed in 2002 at 16900 N Bay Rd. in Sunny Isles Beach. Advertised as a high-end rental community, rents range from $1,711 to $3,219 a month, according to the web.

The third-highest eviction filer is on the Upper East Side. The owner of the 21-story, 439-unit Shorecrest Club at 7950 NE Bayshore Ct. has filed 64 eviction actions. Located by Biscayne Bay, online sources show rents range from $1,750 to $3,382 a month.

Hundreds of Evictions, Nowhere to Go

Newcastle Lake LLC, the owner of the 56-year-old New Castle Lake apartment complex that is in the process of evicting Davis, is tied for the fourth-highest number, with its 64 evictions. The company is asking for rents between $1,395 and $1,990 a month at its 1960s-era complex. A website called NewCastleLiving.com claims to have a gym on the premises, and touts the location as being “12 minutes from Midtown Miami, 14 minutes from Miami International Airport and 20 minutes from Surfside Beach.”

Not mentioned is the frequent sewer system backups, vermin infestation and flooding after rainstorms, Davis said. The front office of Newcastle Lake did not return our call.

Rounding off the Top 10 eviction filers is SPV Realty LC, the owner of Design Place at 5045 NE 2nd Ave. in Miami’s Buena Vista neighborhood, which filed 49 cases. Offering rents at $1,450 to $1,750, its owners, the Podolsky family, want to redevelop the 73-year-old, 512-unit property with a 3,370-unit, mixed-use high-rise community called Sabal Palm Village.

And those are just the cases that have been filed so far.

Something Wicked This Way Comes

Rents and home prices are climbing. That's no secret. Ana Bozovick, a board member of the Miami Association of Realtors, said one reason for the climb is because wealthy individuals are fleeing with their money from high-tax regions like California and New York to low-tax, good-weather Miami. Aside from that, Bozovick said that investors have been purchasing apartment building throughout South Florida.

“Lower-income apartment buildings are particularly attractive because they’re seen as “recession proof” because “someone always has to live there.”

“Normally there would be about a 95% collection rate, but since November of last year, rent collections started dropping to 87% or 88%,” Zyryanova said. “This would make sense since blue-collar workers were the most impacted by COVID.”

Among the low-income buildings purchased in the last couple of years was New Castle Lake for $23.3 million in April 2019. But it isn’t just low-income apartment buildings that have recently changed hands.

“Every month there is a contract signing for a home that is 30% above the asking price,” Murray said.

Because rents and home prices are so high, Murray said there’s evidence that Miami-Dade residents are migrating to cheaper realms like southern Broward or further north. As for the economic recovery, Murray said it makes little sense for someone to get a job for $11 or $12 an hour if their rent is so high, and if they owe thousands of dollars in back rent. (The CDC does not erase debt for back rent.)

“Miami-Dade right now is in a very flux situation,” Murray said. “It is just so darn expensive in relation to renter income that it is just not sustainable.”

Right now, foreclosures are somewhat lower year-over-year, Murray observed. But he’s not sure how long that trend will last. And while tech executives migrating to Miami are promising high-paying jobs, Murray doubted that many low-income service workers will be able to get such high-paying jobs. And as the COVID-19 infection rate has dropped, Miami-Dade County’s unemployment rate actually increased from 7.9% in February to 8.2% in March.

“I keep thinking about Ray Bradbury’s story ‘Something Wicked This Way Comes,’” Murray said. “When is that train going to arrive?”