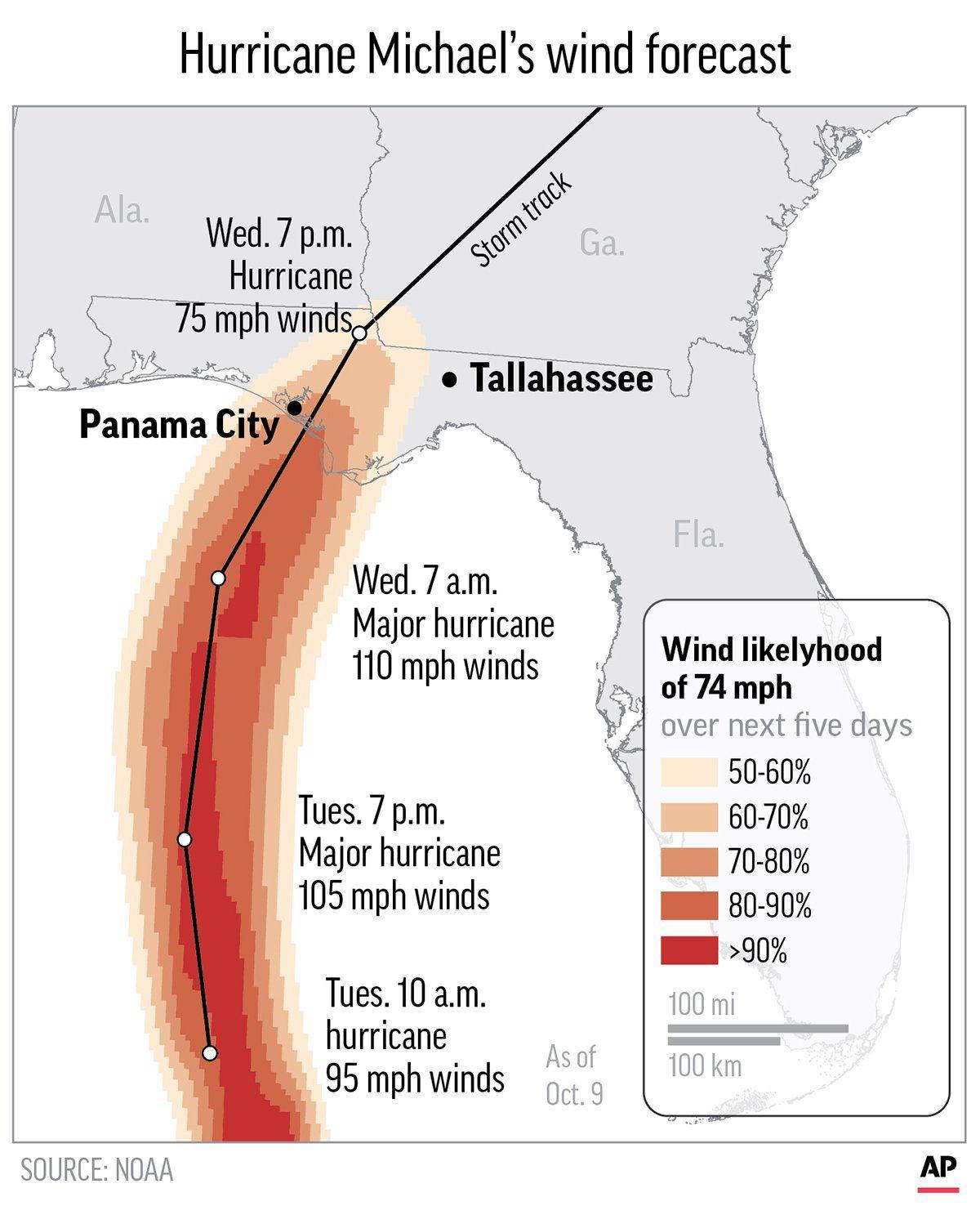 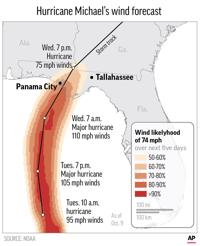 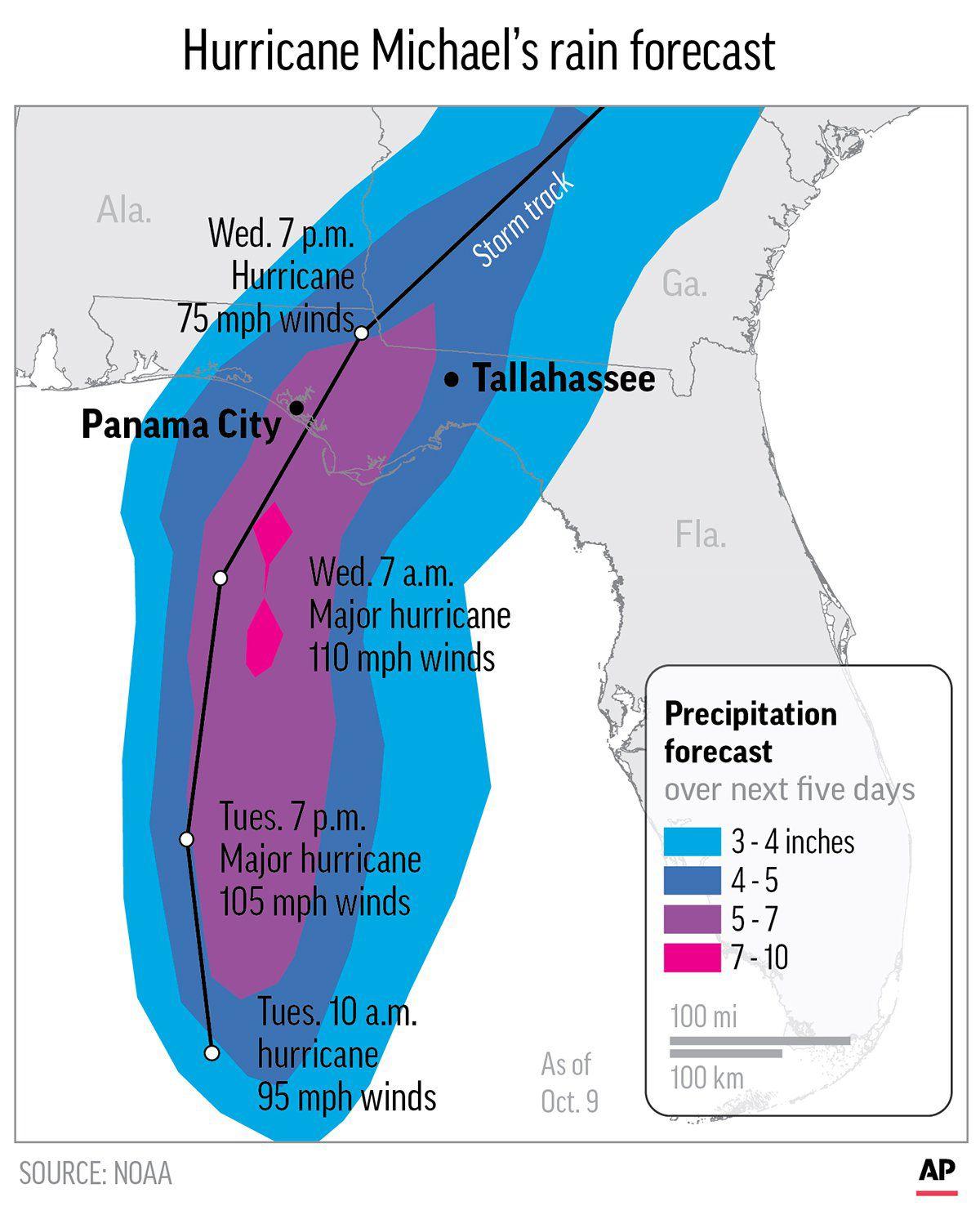 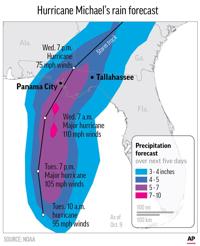 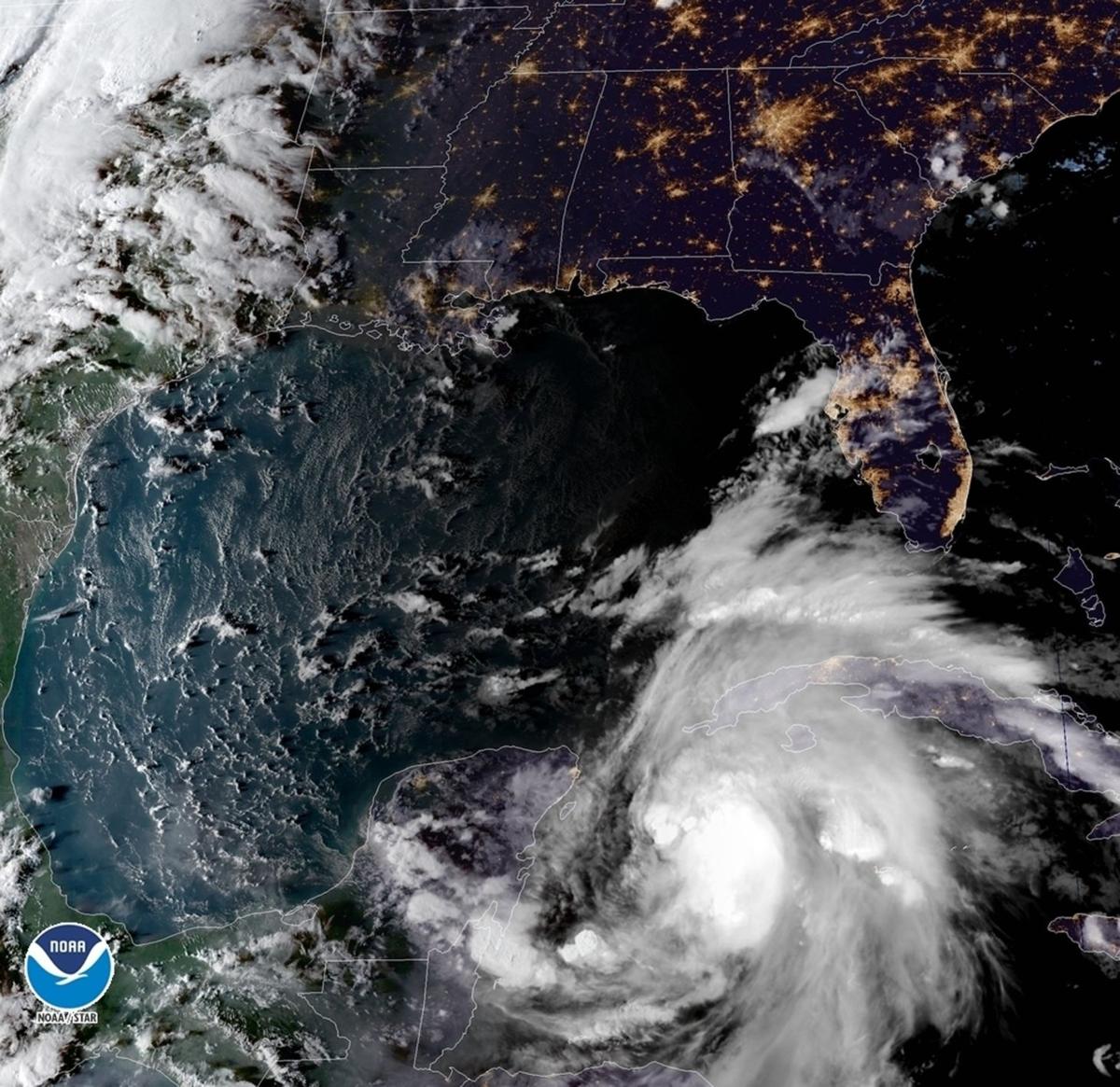 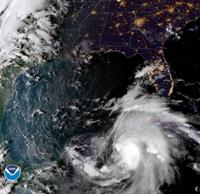 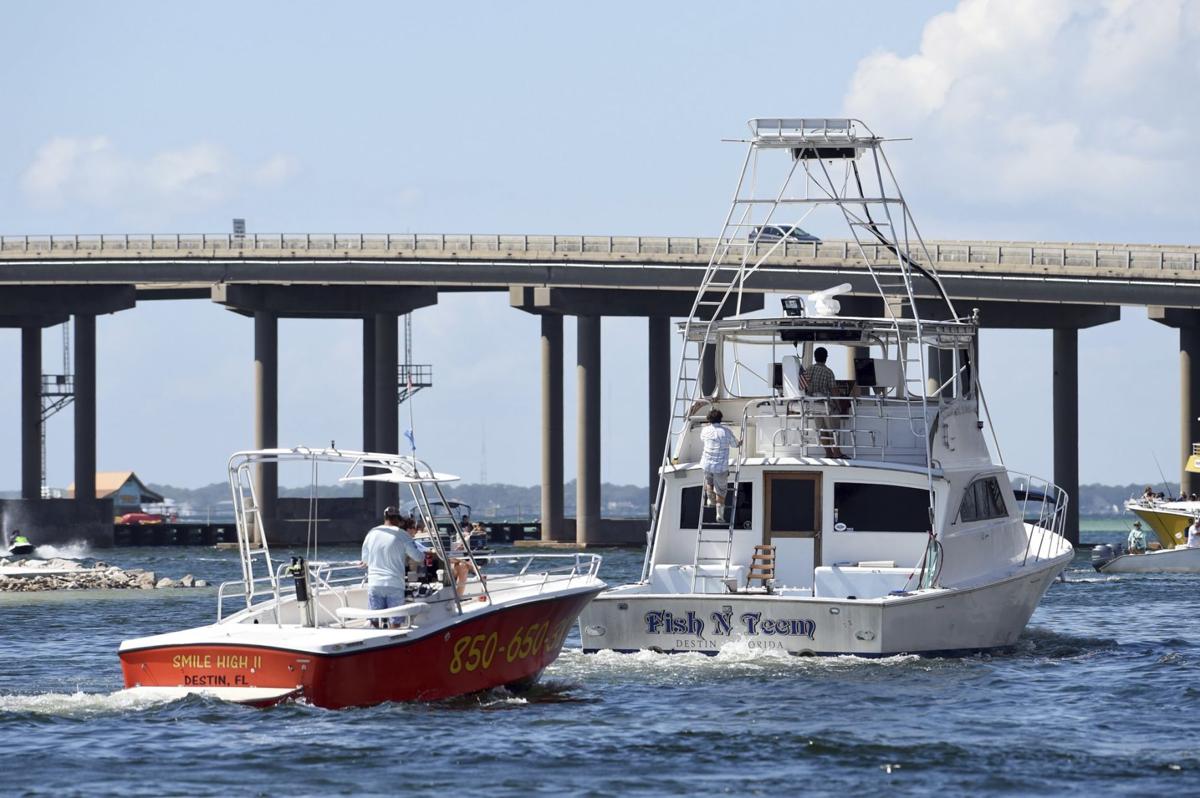 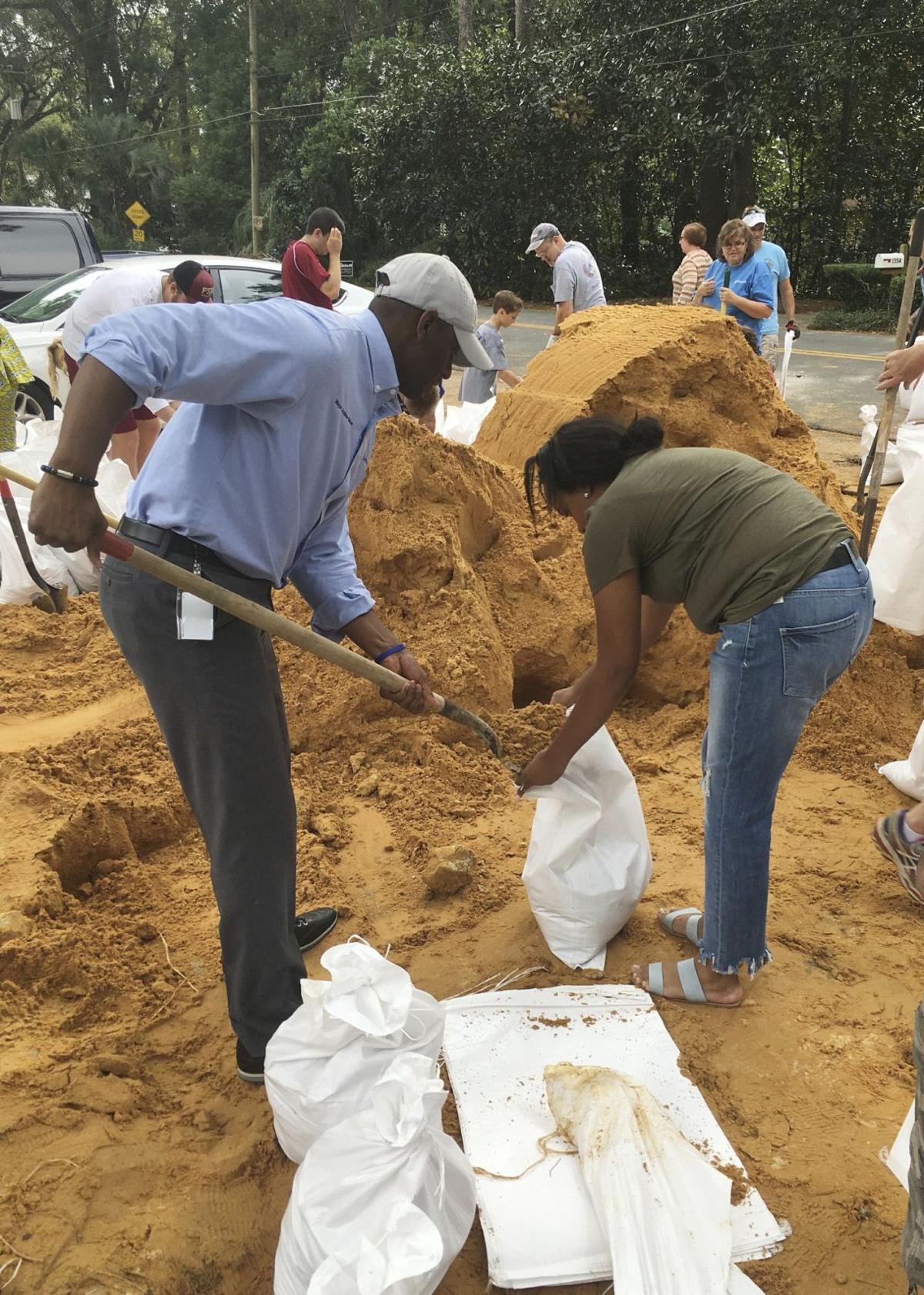 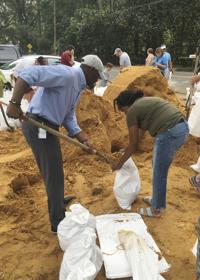 TALLAHASSEE, Fla. (AP) — At least 120,000 people along the Florida Panhandle were ordered to clear out on Tuesday as Hurricane Michael rapidly picked up steam in the Gulf of Mexico and closed in with winds of 110 mph and a potential storm surge of 12 feet.

Coastal residents rushed to board up their homes and sandbag their properties against the fast-moving hurricane, which was expected to blow ashore around midday Wednesday along a relatively lightly populated stretch of shoreline known for its fishing villages and white-sand spring-break beaches.

The speed of the storm — Michael was moving north 12 mph (19 kph) — gave people a dwindling number of hours to prepare or flee before being caught in damaging wind and rain.

“Guess what? That’s today,” National Hurricane Center Director Ken Graham said. “If they tell you to leave, you have to leave.”

The hurricane’s effects will be felt far from its eye.

Aja Kemp, 36, planned to ride out the storm in her mobile home in Crawfordville. She worked all night stocking shelves at a big-box store that was closing later Tuesday, then got to work securing her yard.

Kemp said the bill totaled over $800 when she and her family fled Hurricane Irma’s uncertain path last year.

“I just can’t bring myself to spend that much money,” she said. “We’ve got supplies to last us a week. Plenty of water. I made sure we’ve got clean clothes. We got everything tied down.”

Florida Gov. Rick Scott warned that the “monstrous hurricane” was just hours away, and his Democratic opponent for the Senate, Sen. Bill Nelson, said a “wall of water” could cause major destruction along the Panhandle.

“Don’t think that you can ride this out if you’re in a low-lying area,” Nelson said on CNN.

Mandatory evacuation orders went into effect in Bay County for some 120,000 people in Panama City Beach and other low-lying coastal areas in the bull’s-eye.

In Escambia County, on the western edge of the Panhandle, evacuations began in Pensacola Beach and other vulnerable areas, but not in Pensacola itself, a city of about 54,000.

“We don’t know if it’s going to wipe out our house or not,” Jason McDonald, of Panama City, said as he and his wife drove north into Alabama with their two children, ages 5 and 7. “We want to get them out of the way.”

In Apalachicola, population 2,500, some resolved to stay put.

“We’ve been through this before,” Sally Crown said she closed the cafe where she works because the city was shutting off the sewer system in anticipation of the storm.

Crown planned to go home and hunker down with her two dogs: “This might be really bad and serious. But in my experience, it’s always blown way out of proportion.”

Farther inland, in Tallahassee, the state’s capital, people rushed to fill their gas tanks and grab supplies. Many gas stations in Tallahassee had run out of fuel, including the Quick ‘N’ Save, which was also stripped clean of bottled water and down to about two dozen bags of ice.

Michael could dump up to a foot (30 centimeters) of rain over some Panhandle communities before it sweeps through the Southeast and goes back out to sea by way of the mid-Atlantic states over the next few days.

Forecasters said it could bring 3 to 6 inches of rain to Georgia, the Carolinas and Virginia, triggering flash flooding in a corner of the country still recovering from Hurricane Florence.

“I know people are fatigued from Florence, but don’t let this storm catch you with your guard down,” North Carolina Gov. Roy Cooper said, adding, “A number of homes have rooftop tarps that could be damaged or blown away with this wind.”

While Florence wrung itself out for days and brought ruinous rains, fast-moving Michael is likely to be more about wind and storm surge.

Michael wasn’t quite done wreaking havoc in the Caribbean.

In Cuba, it dumped more than 10 inches (27 centimeters) of rain in places, flooding fields, damaging roads, knocking out power and destroying some homes in the western province of Pinar del Rio. Cuban authorities said they evacuated about 400 people from low-lying areas.

Disaster agencies in El Salvador, Honduras and Nicaragua reported 13 deaths as roofs collapsed and residents were carried away by swollen rivers.

The governors of Florida, Alabama and Georgia declared states of emergency as Michael closed in, and hundreds of Florida National Guard members were activated.

With a month to go before Election Day, Florida voters in evacuation zones were given an extra day to register to vote, once offices reopen after the storm.

The governor also told Florida hospitals and nursing homes to do all they can to assure the safety of the frail and elderly. After Hurricane Irma last year, 14 people died when a South Florida nursing home lost power and air conditioning.