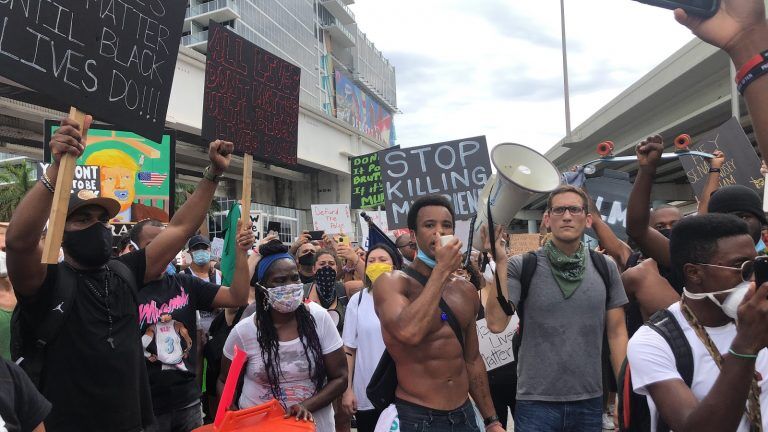 Protests in downtown Miami in June 2020 against the killing of George Floyd. 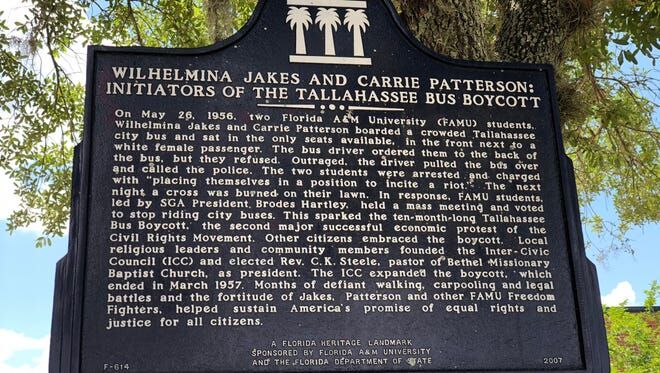 A memorial on FAMU's campus honors Wilhelmina Jakes and Carrie Patterson, who were arrested in 1956 for initiating the Tallahassee Bus Boycott when they sat in the “whites only” section of a Tallahassee bus.

DeSantis championed the measure after nationwide protests focused on racial justice following the death last year of George Floyd, who was killed by a Minneapolis police officer.

The lawsuit filed by Dream Defenders, the Florida State Conference of the NAACP and other organizations says the law is unconstitutionally vague, that it has a “chilling” effect on First Amendment rights and gives police too much power.

In a 90-page order, Walker, who has frequently clashed with the DeSantis administration and the GOP-controlled Legislature, granted the plaintiffs’ request for a preliminary injunction blocking DeSantis and three sheriffs from enforcing the law. Walker’s ruling went into effect immediately.

“Though plaintiffs claim that they and their members fear that it (the law) will be used against them based on the color of their skin or the messages that they express, its vagueness permits those in power to weaponize its enforcement against any group who wishes to express any message that the government disapproves of,” Walker wrote. “Thus, while there may be some Floridians who welcome the chilling effect that this law has on the plaintiffs in this case, depending on who is in power, next time it could be their ox being gored.”

The case focuses in large part on a section of the law that creates a new definition of “riot.” Walker found that the definition “both fails to put Floridians of ordinary intelligence on notice of what acts it criminalizes and encourages arbitrary and discriminatory enforcement, making this provision vague to the point of unconstitutionality.”

DeSantis made the “Combating Public Disorder” law one of his chief priorities for the legislative session that ended in April. The governor reacted by telling reporters he expects Walker’s ruling will be overturned on appeal.

“I guarantee you we will win that on appeal,” DeSantis said, adding, “just like we won almost anything out of Tallahassee on appeal, that's just kind of the way the cookie crumbles.”

But the plaintiffs lauded Walker’s decision, saying in a prepared statement that the ruling will “greatly contribute to the safety of Black organizers” and others affected by the “unjust law.”

The law “effectively criminalizes our constitutional right to peacefully protest and puts anyone – particularly Black people demonstrating against police violence – at risk of unlawful arrest, injury and even death. This targeting of protesters is shameful and directly contradicts our Constitution,” the statement said.

Walker’s lengthy ruling shot down arguments made by DeSantis’ lawyers, who maintained that the lawsuit is based on “unfounded, misleading and conclusory allegations of constitutional violations.” In addition to DeSantis, the lawsuit named as defendants sheriffs in Jacksonville, Broward and Leon counties, where the plaintiffs organize protests.

Much of Walker’s decision centered on the law's new definition of riot which states: “A person commits a riot if he or she willfully participates in a violent public disturbance involving an assembly of three or more persons, acting with a common intent to assist each other in violent and disorderly conduct, resulting in: (a) Injury to another person; (b) Damage to property; or (c) Imminent danger of injury to another person or damage to property.”

The law makes it a third-degree felony for anyone “found guilty of a riot or inciting or encouraging a riot.” People arrested for violations of the anti-rioting provision must be held without bail until their first appearance before a judge.

The definition of riot “through its ambiguity, chills speech and eviscerates that essential breathing space,” Walker wrote in his decision, agreeing that the law puts peaceful protesters at risk of being arrested for the actions of counterprotesters or attendees who turn violent.

“If this court does not enjoin the statute’s enforcement, the lawless actions of a few rogue individuals could effectively criminalize the protected speech of hundreds, if not thousands, of law-abiding Floridians,” he wrote.

The chief judge also made clear that his decision does not stop DeSantis and the three sheriffs from quelling unrest through the use of the common-law definition of a riot, as has been done for generations.

In the introduction to his 90-page ruling, Walker laid out a brief history of civil-rights leaders’ desegregation efforts in the late 1950s and early 1960s.

In 1956, two Florida A&M University students, Wilhelmina Jakes and Carrie Patterson, were arrested for “inciting a riot” after they sat in the “whites only” section of a city bus in Tallahassee, Walker noted. Their actions initiated the Tallahassee Bus Boycott. Five years later, nine clergy members were arrested for their involvement in trying to force a restaurant to serve Black customers, the judge said.

Florida’s anti-riot laws at the time “were used to suppress activities threatening the state’s Jim Crow status quo,” he wrote.

The judge returned to the history lesson in his conclusion to Thursday’s decision.

“Though what’s past is prologue, this court need not give it any power beyond providing context for the case before it now. A critical part of that context … is that following Ms. Jakes’, Ms. Patterson’s, and the 1961 Freedom Riders’ arrests under Florida’s anti-riot laws, the rule of law ultimately prevailed,” Walker wrote. “And so too, with this court, the rule of law prevails.”