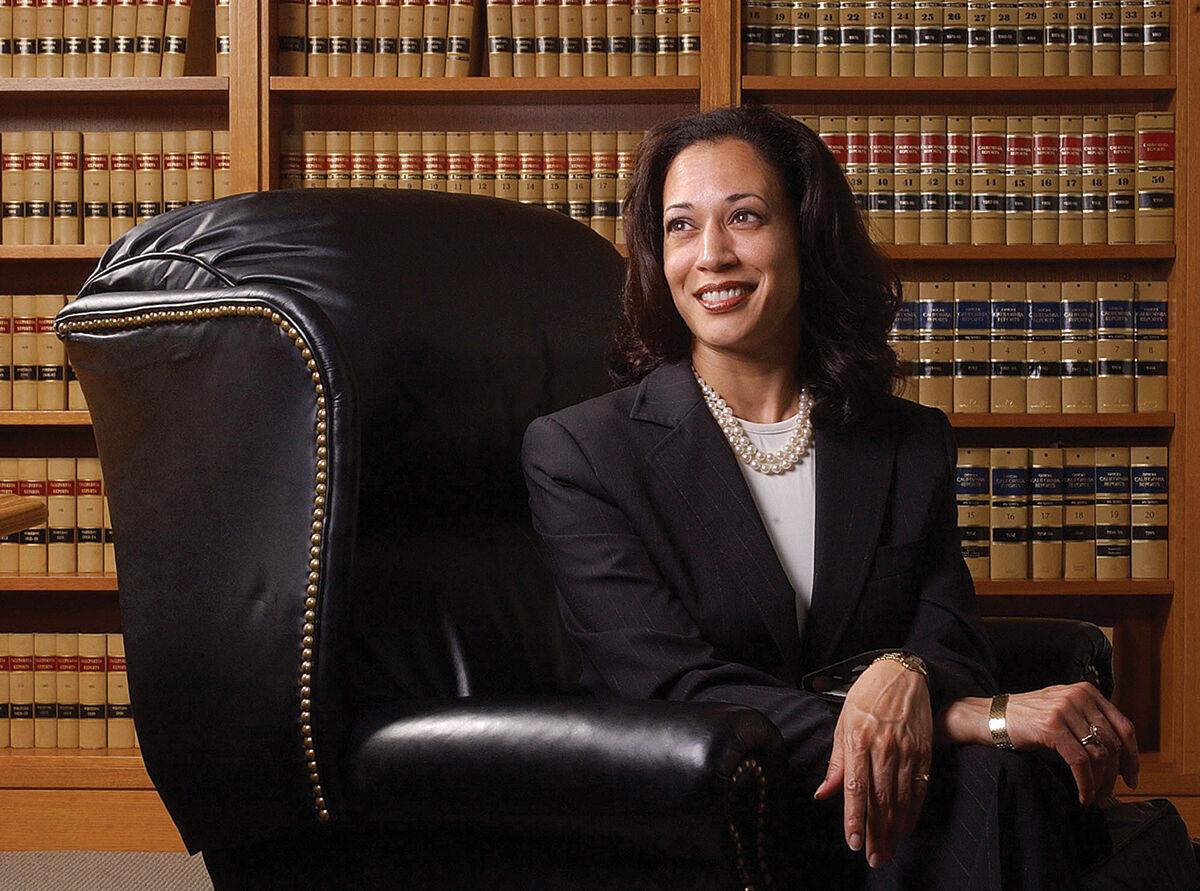 Then San Francisco District Attorney Kamala Harris posing for a portrait in 2004. 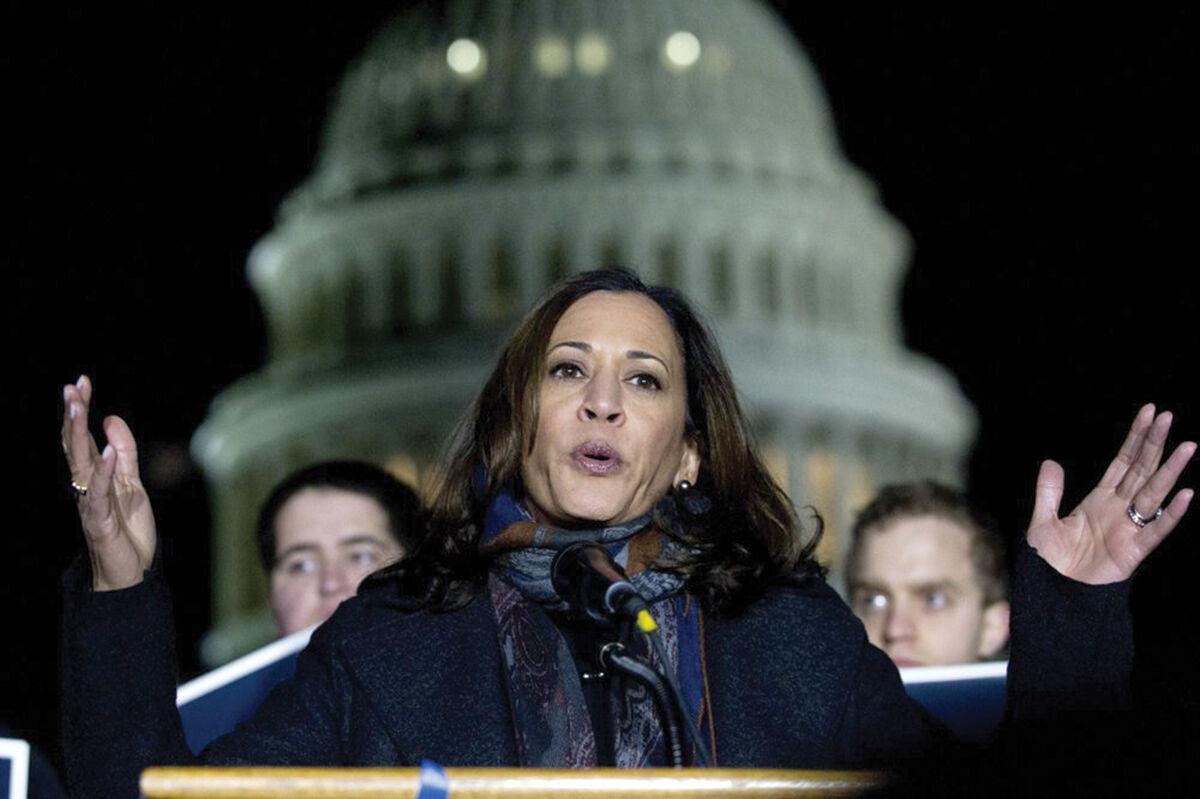 Kamala Harris speaks during a rally in 2018 in support of the Deferred Action for Childhood Arrivals, and to avoid the government shutdown on Capitol Hill. 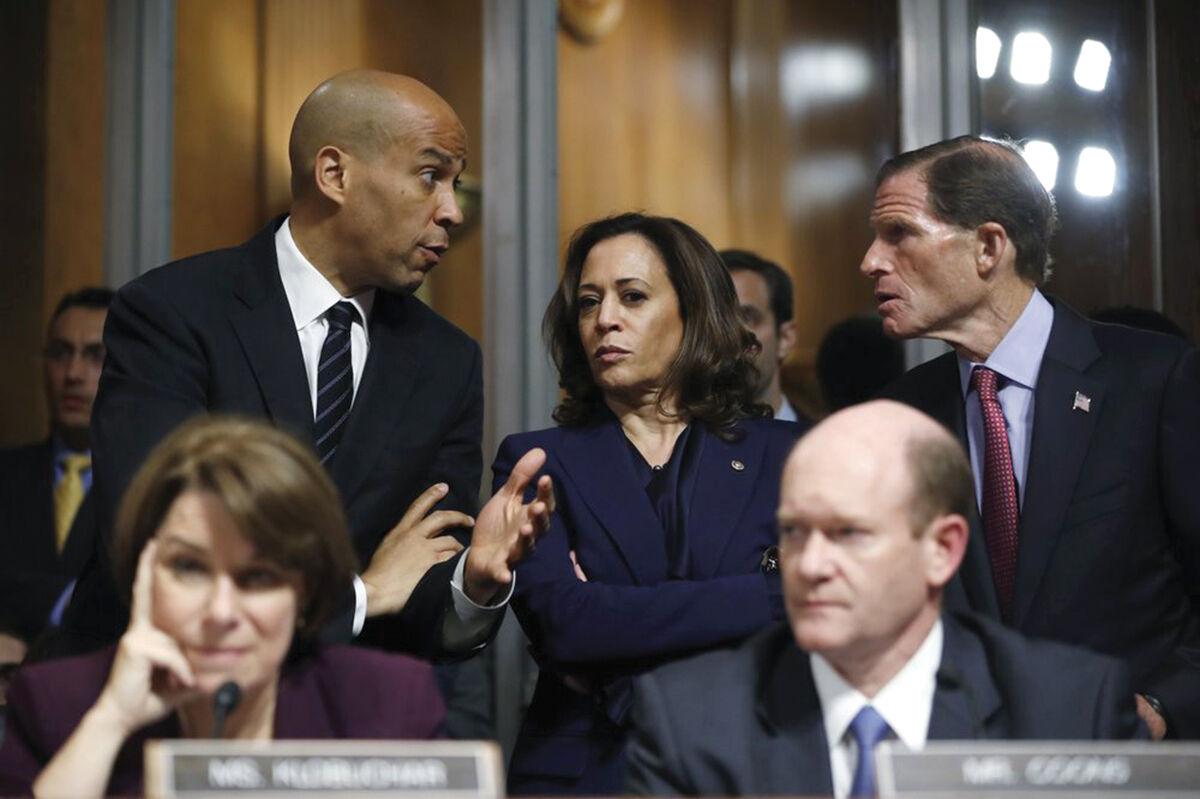 Hours before Kamala Harris took the stage for the first time as Joe Biden’s vice presidential pick, she received a text message from a childhood classmate with photos from their school days.

In one of the pictures, a racially diverse group of first graders are gathered in a classroom. Some had taken the bus from their homes across town to join white students from the affluent hillside neighborhoods in Berkeley, California. A pensive Harris sits on the floor, dutifully looking ahead, a child in the center of an experiment in racial integration.

“That’s how it started. There’s no question!” Harris, 56, texted back to Aaron Peskin, the former classmate who is now a member of the San Francisco Board of Supervisors.

From her earliest years, Harris’ path toward the second-highest office in the United States has tracked the nation’s struggle for racial equality. The start-and-stop progress and sometimes messy debate have shaped her life, from an upbringing by immigrant parents, a childhood among civil rights activists, a career at the helm of a flawed criminal justice system and her rapid ascent to the top of Democratic politics.

Those experiences forged a politician who is unafraid to buck the political powers that be, but also charts a cautious course through policy debates. As a senator and candidate, she emerged as a leader who knows the power of tough questioning and a viral moment, and also the weight of her role as a voice for women of color.

“She’s the right thing at the right time in this country,” said Peskin. “She understands how complicated life is, and what the promises of America are.”

Harris’ political rise, while fast, has not been without criticism and setbacks.

She’s been criticized for shifting policy positions. She faced questions familiar to women in politics, particularly women of color, about her ambition. Republican President Donald Trump labeled her “nasty” for her piercing interrogation of his nominees, including now-Supreme Court Justice Brett Kavanaugh. Some progressive Democrats, meanwhile, viewed her work as a prosecutor skeptically, questioning her use of policies they say are discriminatory.

Her own presidential bid, announced before 20,000 people in her hometown of Oakland, California, flamed out before primary season voting began. She struggled to raise money and present a clear vision.

“My mother Shyamala raised my sister Maya and me to believe that it was up to us and every generation of Americans to keep on marching,” Harris said in her first speech after Biden announced his selection. “She’d tell us: Don’t sit around and complain about things. Do something.”

Harris seemed bound to rise in politics from the very earliest days of her career. She was a Howard University graduate without family wealth or high-powered ties when she returned to her native Bay Area for law school and took a job at the Alameda County District Attorney’s office in 1990. She quickly began making connections in San Francisco’s tightknit and competitive political circles.

She served on the San Francisco Museum of Modern Art board, where she reached out to Libby Schaaf, now Oakland’s mayor, who was running a volunteer program in Oakland’s public schools. They launched a mentoring program to connect inner-city students interested in fine arts with museum members, giving the kids access to one of the city’s elite institutions.

“I love to say that Kamala has been fighting for the people long before anyone was looking,” Schaaf said.

Harris, then working for the city attorney, challenged her former boss, San Francisco District Attorney Terence Hallinan. He backed legalization of medical marijuana and other progressive issues. But critics questioned his priorities. Harris tacked right on the issues to run against him, pledging to be tough on crime and repair relationships with police.

She had the backing of monied donors, but the public barely knew her. So she used an ironing board as a pop-up table outside grocery stores to meet voters. She promised to bring more attention to domestic violence cases and to Black mothers who had lost their children to homicide, issues she felt Hallinan was neglecting.

Debbie Mesloh, a longtime friend and adviser, said Harris cut her teeth in that first race, learning lessons that she would carry into national politics. Harris faced both the scrutiny of her personal life and the resistance to her rise as she raced past rivals from more well-connected families.

Just months into her tenure, she decided not to seek the death penalty against a man charged with killing a police officer. That decision angered law enforcement officers and drew rebuke from Democratic Sen. Dianne Feinstein, the city’s former mayor and a force in California politics. But Harris had run as a death penalty opponent and her move made good on a campaign promise. The issue would later fuel Harris’ reputation as a political shape-shifter.

Harris’ allies say she found ways to make change when possible. As district attorney, she launched a reentry program that connected nonviolent offenders to jobs and education that became a national model.

“I remember the first time I visited the county jail. So many young men, and they were mostly Black or brown or poor,” she wrote in her 2019 book, “The Truths We Hold,” recalling her time as a young prosecutor. “They represented a living monument to lost potential, and I wanted to tear it down.”

But she also focused on issues that activists said punished poor and minority families. She took on truancy and supported a statewide law modeled on her city initiative that threatened parents with jail time, fines and lost public benefits if they failed to send their children to school.

Harris only barely won her race for state attorney general in 2010, claiming the title of California’s “top cop” during a period of rapidly shifting views on criminal justice. Soon the Black Lives Matter movement was taking hold, along with outrage over police brutality, prompted by the killings of Black people such as Trayvon Martin and Michael Brown.

Harris declined to support state legislation that would have required her office to conduct independent investigations of officer-involved shootings, but she now supports outside investigations of police shootings, one of several shifts on policing policies she’s made in the U.S. Senate.

Harris and the younger Biden worked together on a settlement with the nation’s five largest mortgage lenders following the foreclosure crisis. The deal would reduce loans for roughly 1 million households, but Harris and Biden were among the last attorneys general to sign on, arguing it let the lenders off too easily.

They talked nearly every day, Harris said, with Beau supporting her decision to keep fighting despite political pressure to take the deal. Joe Biden said that relationship was key in his decision to tap Harris as his running mate, and he was visibly emotional during that first speech she made as his vice presidential pick when she talked about his son, who died of a brain tumor in 2015.

Harris won her Senate seat in 2016 as Trump won the presidency, setting off an immediate scramble among Democrats about who would run to replace him. Within a week of her swearing-in ceremony, Harris turned to her prosecutorial skills to grill retired Gen. John Kelly, then Trump’s nominee for homeland security secretary, about the new administration’s handling of some young immigrants’ personal information.

“We would not use this information against them?” she asked. Kelly fumbled his answer.

The moment was an early demonstration of the kind of senator Harris would be – one unafraid to battle Trump and good at creating viral moments that energized Democrats.

Nearly all the Democratic senators joined Republicans in voting for Kelly. But Harris was among 11 Democrats, and just three first-term senators, who did not. Nathan Barankin, then Harris’ chief of staff and a longtime aide, recalled Harris making an aggressive case to her colleagues that they should not be satisfied by Kelly’s answers despite his record as a well-respected military officer.

“I don’t think there are too many freshmen that do that,” Barankin said.

That perspective was steeped in Harris’ upbringing by two immigrant parents. In Berkeley, Harris and her family lived above a day care center with posters of Frederick Douglass and Harriet Tubman on the walls.

They attended a Pentecostal church on Sundays and, on Thursdays, a Black cultural space called the Rainbow Sign that was a gathering spot for artists, intellectuals and activists. Many of her mother’s closest friends were Black men and women who became “aunts and uncles” to Harris and her sister, later influencing Harris’ decision to attend a historically Black university.

“She knew that her adopted homeland would see Maya and me as Black girls, and she was determined to make sure we would grow into confident, proud Black women,” Harris wrote of her mother.

At Howard, Harris joined Alpha Kappa Alpha, the nation’s oldest sorority for Black women. Its network, along with those of eight other Black fraternities and sororities known as the Divine Nine, now offers Harris a powerful base of support.

Harris, mindful of her history-making role, has called Biden bold for choosing a Black woman to join him on the ticket.

“I have not achieved anything that I have without the support of many who believed in the possibility of someone who has never been there before,” Harris said.