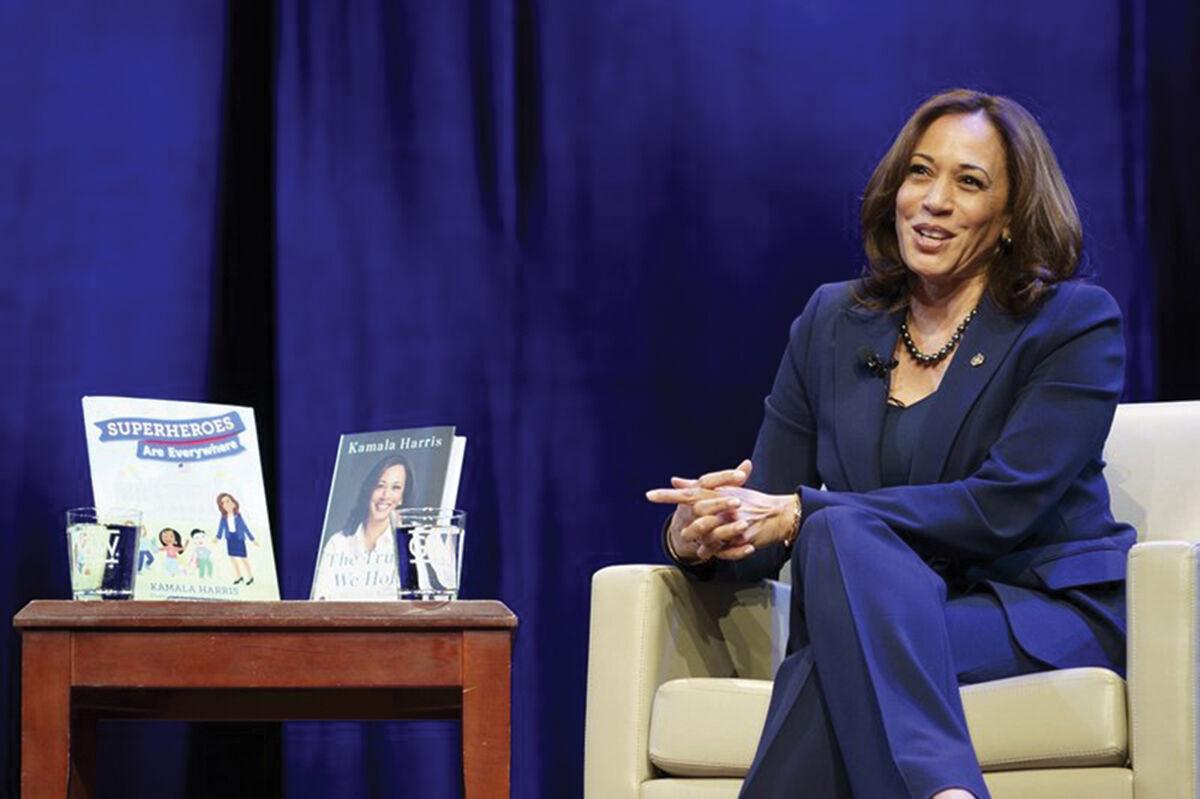 Vice President-elect Kamala Harris shown here during her January 2019 book tour. Books by and about Harris are proving to be a popular purchase following the election. She was the subject or author of four books on the Amazon top 10 Sunday, Nov. 8, 2020. 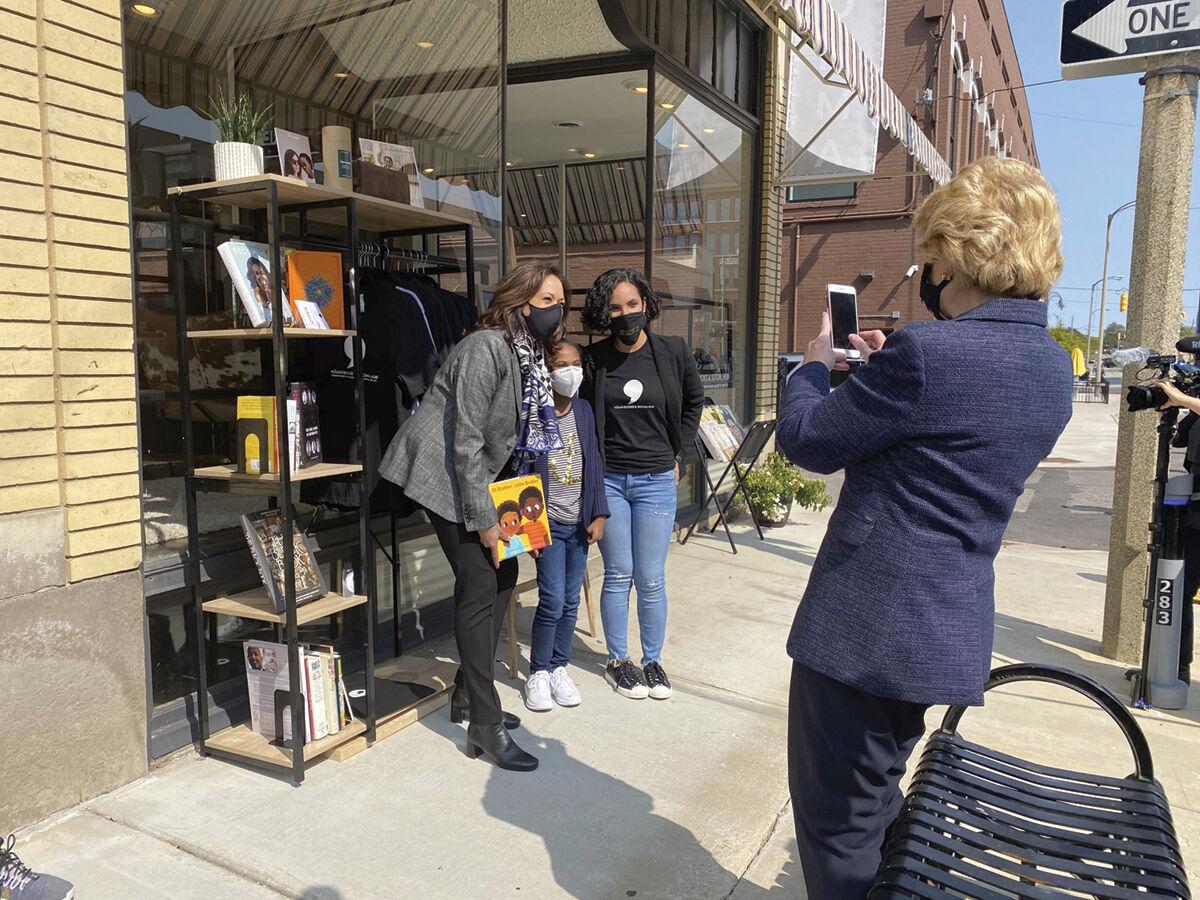 Michigan Sen. Debbie Stabenow, right, takes a picture of Vice President-elect Kamala Harris posing for a photo on Sept. 22, 2020, with Egypt Otis and her 9-year-old daughter Eva Allen in front of their downtown Flint, Michigan, bookstore.

When Ashley Richardson-George’s 5-year-old daughter saw Kamala Harris wearing a white suffragette suit during her prime-time victory speech on Saturday, she ran into her room and came back minutes later wearing a white dress and sweater.

Not only did her daughter, Andrea, want to be like the vice president-elect, she wanted to look like her, too. And on that night, it was more possible than ever.

“I was just really happy for her because you really don’t believe that you can be anything that you want unless you see it,” said Richardson-George of New York. “So for her, she was like, ‘I can be the president.’ So to see that glimmer in her eyes as a parent, it really is powerful to me as her mom.”

For countless women and girls, Harris’ achievement of reaching the second highest office in the country represents hope, validation and the shattering of a proverbial glass ceiling that has kept mostly white men perched at the top tiers of American government.

“She’s literally the blueprint to women’s political possibility, and now she is stepping literally into the Oval Office and she’s going to put an intersectional lens on everything this administration does from a gender or race lens,” said Glynda Carr, the president and CEO of Higher Heights, which focuses on electing Black women into political offices.

Harris, a 56-year-old California senator who is the first Black woman and the first person of South Asian descent elected to the vice presidency, has long credited civil rights legends like Shirley Chisholm, Mary McLeod Bethune and Fannie Lou Hamer as sources of inspiration, as well as her Indian mother, Shyamala Gopalan.

On Saturday, she paid tribute to the women, particularly Black women, who paved the way for her.

“While I may be the first woman in this office, I will not be the last,” Harris said in her first post-election address to the nation.

Los Angeles mother Kim Rincon sat with her arm around her 9-year-old daughter, Jordan, to watch the speech.

A year ago, Rincon and Jordan had met Harris backstage at a rally during her bid for president in the 2020 Democratic primaries. Jordan gave Harris the “Kamala for President” button she was wearing before Harris crouched to the ground to thank her at eye level.

“Harris was being celebrated as this superstar at that rally and now on stage accepting the vice presidency,” said Rincon, whose daughter is Mexican and Vietnamese American. “My biggest hope is that Jordan grows up thinking this is normal.”

A similar scene played out in Phoenix, in Nicol Russell’s home.

As Harris stepped onto the stage, Russell’s 5-year-old daughter Makena and her best friend immediately sprang up and ran to the TV. For minutes, they stood transfixed.

“She’s brown like my mom,” Makena told her friend.

For Russell, a Black and Native Hawaiian woman, Harris’ election has profound meaning not just as it relates to her daughter, but to herself as well.

“In watching her, I see my sisters, I see my mother. I see every hardworking Black or brown woman,” Russell said. “I see Stacey Abrams. I see Queen Liliuokalani. I see all the women who endured so many terrible things to help clear a pathway for us to have this moment. She symbolizes everything we’ve been working for.”

So when Allen and Otis watched Harris’ historic speech Saturday, it was a full circle moment for the Black mother and daughter.

“My daughter is going to be a part of history because she had the opportunity to have a conversation with our first Black woman vice president,” Otis said. “It just shows you how important representation is.”

In Fairbanks, Alaska, Trina Bailey and her 13-year-old daughter, Leilah, sat arm-in-arm on the couch watching Harris’ speech. It was a moment of hope and mourning as Bailey reflected on the Black women she loves who never had the chance to step on a stage like that.

“I believe Black women belong in all places where decisions are being made,” said Bailey, who is Black herself. “Today, that’s Senator Kamala Harris. Tomorrow, it’s my daughter, Leilah Bailey.”

Leilah, who wants to be president one day, said Harris’ speech made her confident her dream is possible.

“Young girls are feeling like they are able to do more than they thought they were able to,” Leilah said. “I felt amazing because it made me feel like I had a chance to do things that mostly men have done.”