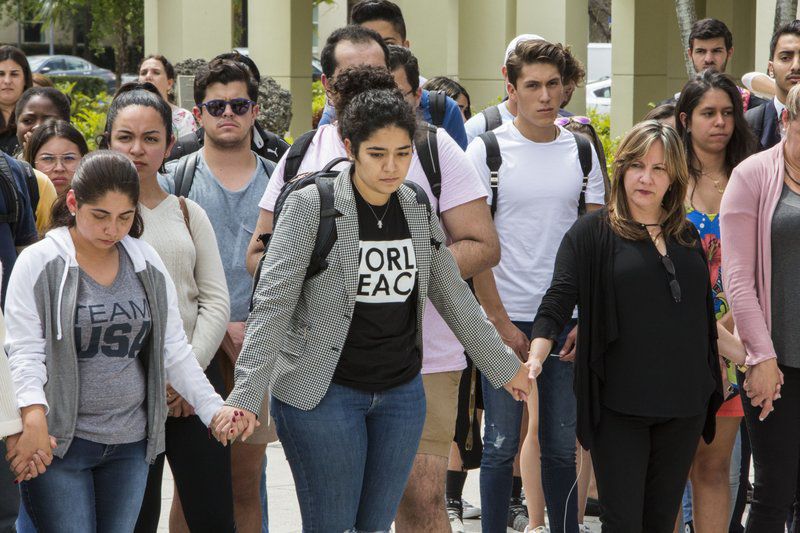 Florida International University students observe a moment of silence for the victims of the bridge collapse at the school four days earlier, Monday, March 19, 2018, in Miami. 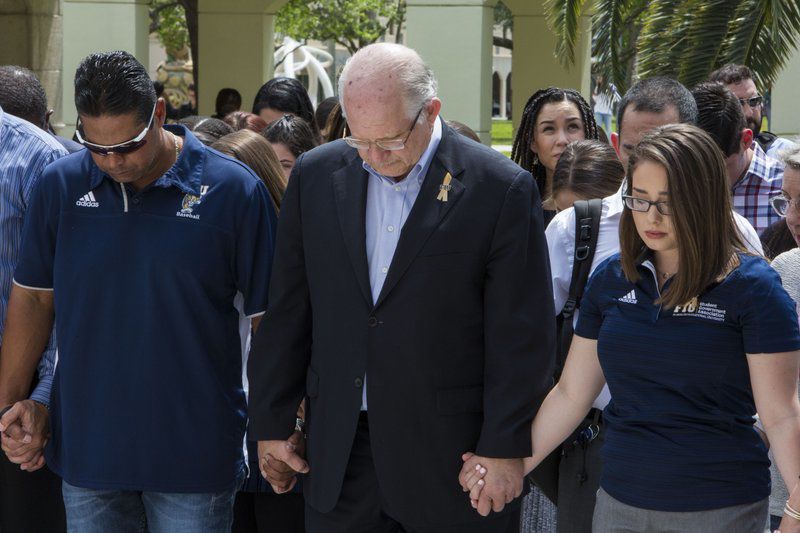 FIU President Mark Rosenberg joins hands with baseball coach Mervyl Melendez, left, and student government president Krista Schmidt, as they bow their heads during a moment of silence for the victims of the bridge collapse at the school four days earlier, Monday, March 19, 2018, in Miami. 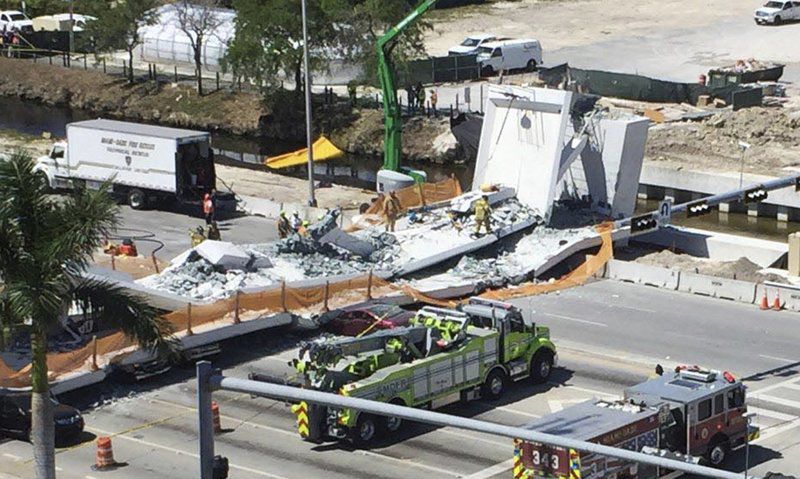 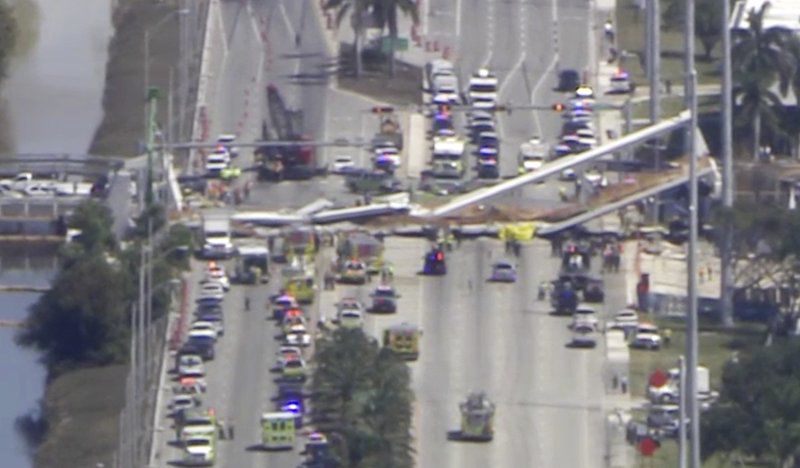 Emergency personnel work at the scene of a collapsed bridge. 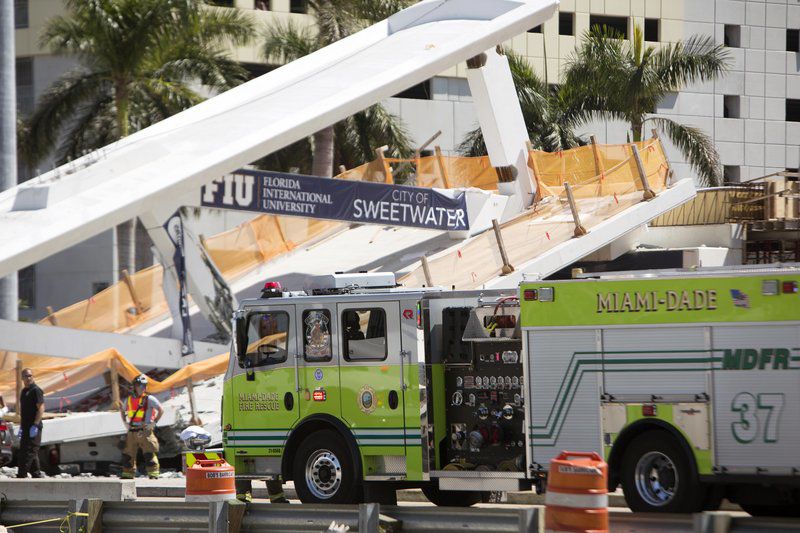 Emergency personnel responds to a collapsed pedestrian bridge at Florida International University on Thursday, March 15, 2018 in the Miami area. The brand-new pedestrian bridge collapsed onto a highway crushing at least five vehicles. Several people were seen being loaded into ambulances and authorities said they were searching for people.

Construction of the pedestrian bridge that collapsed and killed six people in the Miami area was behind schedule and millions over budget, in part because of a key change in the design and placement of one of its support towers.

Documents obtained by The Associated Press through a public-records request show that the Florida Department of Transportation in October 2016 ordered Florida International University and its contractors to move one of the bridge’s main support structures 11 feet (3 meters) north to the edge of a canal, widening the gap between the crossing’s end supports and requiring some new structural design.

The span’s signature, 109-foot-tall (33-meter-tall) pylon was to be built atop a footing, or base, at the northern end of the span. In addition to basic support, its design was also aimed at contributing to the aesthetics of the bridge, which itself was touted as an architectural marvel that would span a busy road and canal to connect the rapidly growing university to the nearby community of Sweetwater. In their winning 2015 proposal, designers said the bridge provided “spectacular views” for both pedestrians using the bridge and drivers passing beneath it. And they added that the tower could serve as a safety feature because it provided an “eagle-eyed location” for additional lighting and security cameras.

Videos of the collapse show that the concrete, prefabricated segment of the bridge started crumbling on the same end of the span where the tower redesign occurred, two days after an engineer on the project reported cracks in the same location. The segment that failed had been placed atop the pylon’s footing, and the taller tower section was to be installed later.

Though it is still unclear if the design change played a role in the failure, emails between the school, contractors, officials with the city of Sweetwater and permitting agencies show a project that ended up behind schedule, which had officials worried that further delays could jeopardize millions in federal Department of Transportation funds.

When the bridge collapsed, the project was already running about $2.6 million over its $9.4 million initial budget, cost-tracking documents from February show. Originally scheduled to be completed in July, the finish date had been pushed back to January 2019.

Difficulties began in late 2016, when the Florida Department of Transportation emailed project officials saying they needed to move the bridge’s signature pylon to allow for future widening of the road, according to the documents. The tower was to be located on the north side between the road and the canal, and was designed to have cables connecting it to the structure below.

“The first option being entertained is providing these extra travel lane (sic) on the north side of SW 8th St.,” wrote Alfred Reyna, a transportation department employee working on the bridge project. “This first option places the current location of the pylon in conflict with the extra travel lane and would require bridge design modifications.”

After weeks of back and forth, it was decided to move the pylon 11 feet to the north, sitting near the edge of the canal. According to documents, initial costs for the new design were $204,540, with another $402,723 for construction changes. The final cost of the change was not divulged in the documents.

“The city attorney is advising us not to speak about anything to do with the bridge,” said Sandra Antonio, a spokeswoman for the city of Sweetwater, which was working on the bridge project with FIU. The tower was to be located on the Sweetwater side of the project.

Don Silver, a spokesman for Munilla Construction Management, or MCM, the Miami-based construction management firm that won the bridge contract, said the National Transportation Safety Board had forbidden engineers or contractors from talking about the project pending its investigation.

MCM collaborated with Tallahassee-based FIGG Bridge Design on the bridge project. A FIGG spokeswoman, Cheryl Stopnick, said it would be “inappropriate to discuss specific detail about bridge design” during the investigation.

A spokeswoman for FIU did not immediately respond Tuesday to questions about the pylon relocation in the bridge design.

While the NTSB is in the early stages of its investigation, multiple engineers who reviewed the documents obtained by the AP said moving the tower after the bridge’s initial design invited errors.

Henry Petroski, a professor of civil engineering at Duke University and a leading authority on engineering failures, said even seemingly minor changes in a bridge’s design can lead to failures.

“Once a design is completed, subsequent modifications tend to be suggested and approved without the full care that went into the original design. This has happened time and again in bridges and other engineering structures,” he said.

The documents show that further time pressures were put on the tower redesign by construction delays due to a bottleneck at the U.S. Army Corps of Engineers. The Corps was in charge of permitting certain aspects of the new tower’s footing and other elements but had stopped issuing permits due to federal budget cuts. Documents show the contractors wouldn’t begin work on the new tower until the Corp’s permits were finished, and FIU was worried the delays could jeopardize federal funding.

Kenneth Jessell, a senior vice president for financial affairs at FIU, in 2017 expressed worries that the delays would jeopardize federal TIGER funds for the university’s massive transportation redesign, of which the bridge was a key part.

When told the permits would likely come through soon, he expressed relief. “This is a new learning experience for FIU so I appreciate your patience and guidance,” he said, referring to the scope of the bridge-building project.

Meeting minutes from February also show that MCM had hired extra personnel after another contractor complained of delays.

Bridge engineers who reviewed photographs of the collapse and design schematics associated with moving the bridge’s main tower said it was ill-advised to move it after the initial design was complete, but that more analysis was warranted before it could be known whether this played a role in the collapse.

Robert Bea, an emeritus engineering professor at the University of California, Berkeley, said the base of the tower may have been more flexible after it was moved closer to the canal. This could have created more stress on the bridge section that collapsed when crews removed temporary supports from beneath it so traffic could resume, he said.