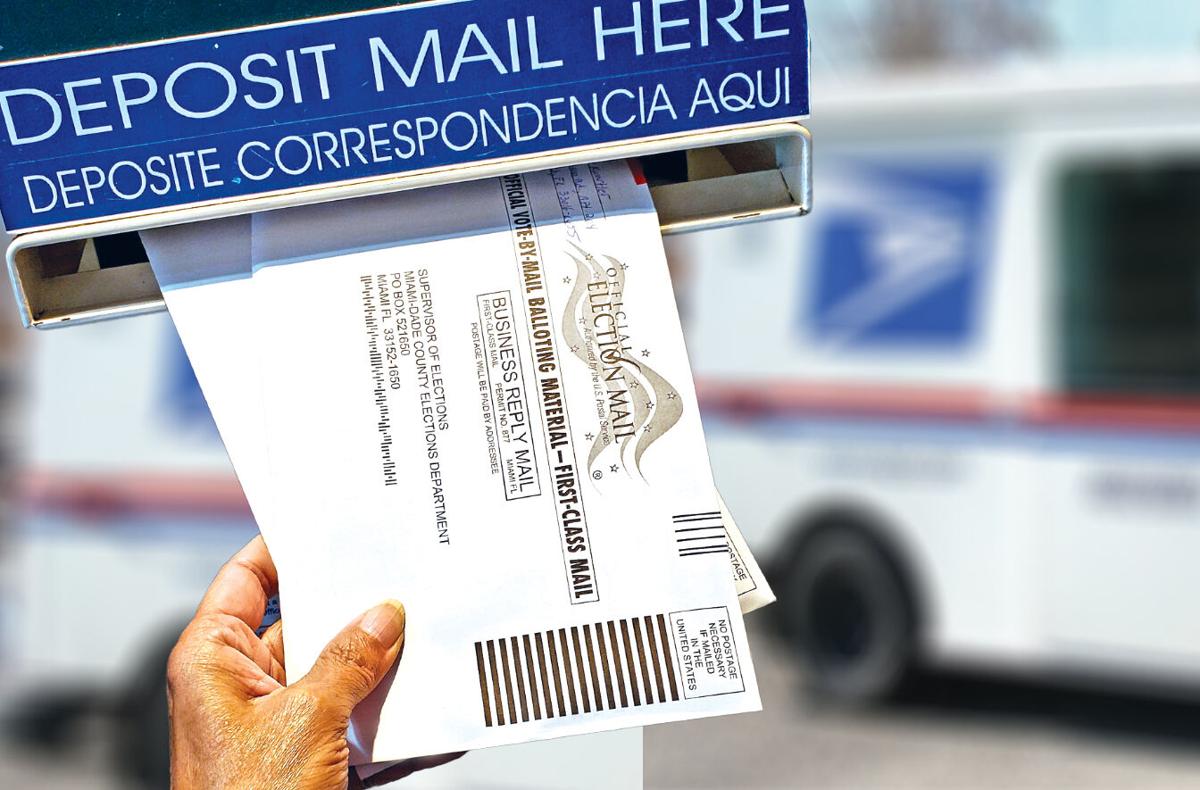 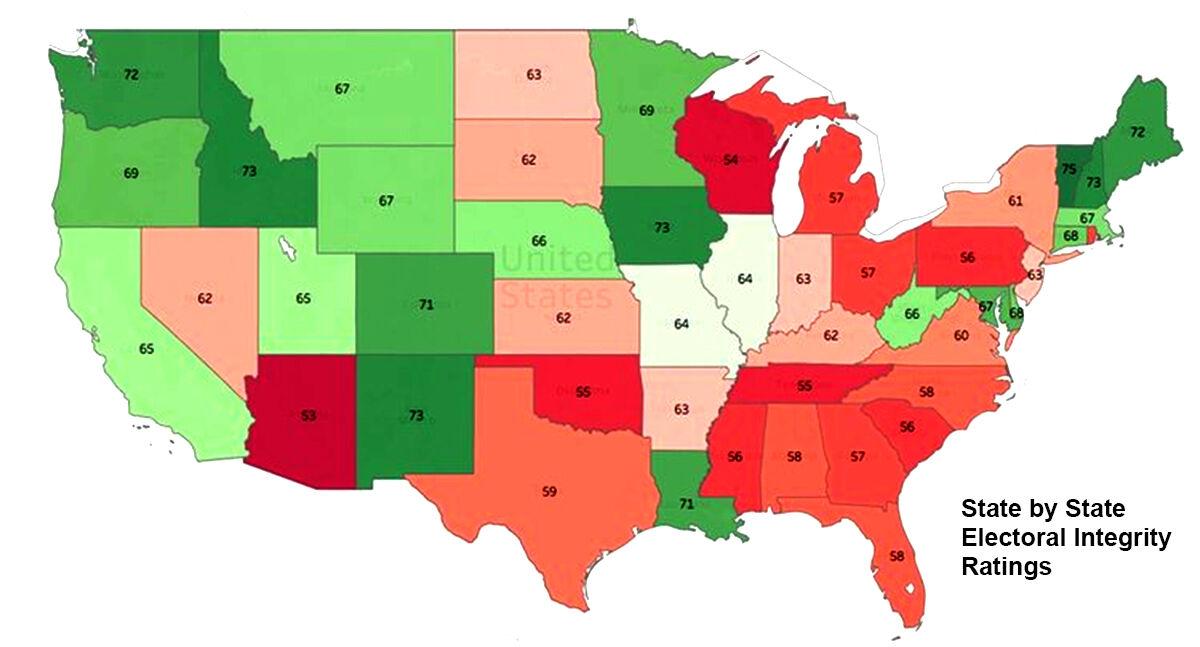 Electoral laws and voter registration procedures were classified by state, as well as their levels of party competition and voting turnout, for a multilevel analysis to determine perceptions of electoral integrity in the nation.

Litigation and voting by mail has dominated the election season. President Trump has insisted that increased mail-in ballot voting will result in greater voter fraud, but the FBI says there is no substantial evidence to prove his claim. Florida elections departments and Gov. Ron DeSantis also have repeatedly contradicted the president.

Making sure every vote counts is a major concern locally and nationwide, because a record number of mail-in-ballots are anticipated and because tens of thousands of ballots are traditionally uncounted in typical election seasons for a variety of reasons ranging from their late arrival to missing or unmatched signatures that can’t be cured in time. In Florida, the deadline to request a vote-by-mail ballot is Oct. 24, and mail-in ballots must arrive at all supervisor of elections offices no later than 7 p.m. on Election Day.

The Miami Times reported on Sept. 16 that almost 8,000 votes were uncounted in the August primary. Politico reported that more than 35,000 vote-by-mail ballots were rejected statewide. According to NPR, more than 550,000 presidential primary ballots failed to make the cut. And the Election Administration and Voting Survey from the 115th Congress reported 318,728 rejected ballots in the 2016 presidential election.

Alarming numbers like those are behind voter advocacy groups suing the state of Florida.

“People have a right to vote in the simplest way possible,” he said.

When asked about which Florida statutes should be altered for future elections, Geller pointed to the 7 p.m. deadline, extending early voting through Election Day and an increased use of drop boxes statewide.

“If you mail in your ballot by Election Day, it should be counted,” he said.

Geller also pointed to a temporary settlement with Florida’s Supervisor of Elections in the state’s eight largest counties that will not be reexamined until after the 2020 presidential election.

“We were using what we considered to be a requirement to retain ballot images that are generated by the machines,” he said. “The images are generated automatically and are used in the tabulating process, but it’s unclear [to them] on whether they’re required to retain these images as public records.”

If ballot images were kept on public record, votes would have a better shot at being validated in a tabulation process should election results be questioned.

The lawsuits sought to eliminate postage for mail-in ballots in all of Florida, extend mail-in ballot deadlines and remove a prohibition against paid workers collecting mail-in ballots. The suits were eventually consolidated and settled in July with Secretary of State Laurel Lee agreeing to conduct extensive voter outreach, maximize the use of drop boxes for vote-by-mail ballots and extend hours of early voting.

Changes to state and local election laws sparked by litigation could make margins of victory larger in this and future elections, preventing races from being decided by less than 1%, as occurred in the recent Miami-Dade County August primary and in prior local, state and federal races.

The League of Women Voters of Florida (LWVFL) has sued the state in the past to make voting more accessible, winning a lawsuit just last year to make colleges and universities early voting sites. The historic voting rights group that celebrated its centennial right before the pandemic has several programs to assist voters.

“We have a lot of systems in place,” said LWVFL president Patricia Brigham. “Before the recent primary, we had a major campaign to request mail-in ballots early and to not wait until the last minute. With the slowdown of the Postal Service, we encourage people to mail [their votes] early. We do public education presentations all over the place, from Pensacola to the Keys.”

Comparing Florida to other states

Some states with the highest mail-in ballot rejection rates from the 2020 primaries have large populations and extensive urban corps. They are California (102,428), Washington (95,261) and New York (84,000), according to NPR. States with the lowest rejection rates from the 2020 primaries include South Carolina (469), Arkansas (383) and Mississippi (315). Yet Harvard University’s Electoral Integrity Project published data in 2016 that shows states on the West Coast producing more fair and better electoral laws. States on the East Coast had lower approval ratings, especially in the South. Florida, Tennessee, South Carolina and North Carolina ranged in the mid-50s. No states scored between 80-100.

The employee also mentioned that postmarked vote-by-mail ballots may now be counted within a 17-day period after Election Day, instead of the prior 3-day window.

“The rules were revised by executive order of Gov. Gina Raimondo,” said Miguel Nunez, Rhode Island’s board of elections deputy director. “The 14-day period for postmarked mail-in ballots to be opened and certified was changed to 20 days after the election. There was a signature verification system put in place as well.”

Oklahoma, a far more conservative state than the aforementioned two, detailed progress by posting an instructional video showing people how to complete a mail-in ballot. Elections Board public information officer Misha Mohre also reported an increased use of social media to keep voters informed. Absentee voters’ signatures must be notarized. Before the pandemic, 12 states required notary or witness signatures with their ballots.

The witness mandate was unsuccessfully challenged in Wisconsin by Disability Rights Wisconsin. Earlier this month, the South Carolina Supreme Court ruled in favor of reinstating the witness signature requirement. The decision was made pending appeal and while voters have already started returning ballots.

A lack of witness signatures or other witness information is already the leading cause of ballots being set aside before being counted in the battleground state of North Carolina, with problems disproportionately affecting Black voters who traditionally vote in person, according to an Associated Press analysis of state election data. Voting rights advocates say it’s a sign that the extra step is a barrier that could disenfranchise first-time mail-in voters. A witness signature is not required in any of the five all-mail voting states in the West. Proponents of the requirement say it’s designed to prevent voter fraud, while voting rights activists call the practice voter suppression and particularly onerous for the elderly, the homebound and people with disabilities.

The litigation frenzy in Ohio is still ongoing, where only one drop box is allowed in each of the state’s 88 counties.

People are already predicting a presidential race that will be too close to call, with both parties lawyering up for nationwide litigation over vote counts. That’s something Florida knows all too well.

The 2000 presidential election between George H.W. Bush and Al Gore came down to Florida and the infamous hanging chads that forced elections staffers to frequently lift ballots to the light to determine if a vote was punched for one candidate over the other. At the time Bush had a powerful ally in the governor’s office, his brother Jeb, who pressured then Miami-Dade County Mayor Alex Penelas to end the seemingly endless count. He did. The result landed in the U.S. Supreme Court, which settled the recount dispute by putting “W” in the White House.

It was this historic ending that led many states to invest in the electronic voting systems now used. But despite vastly improved structures, major flaws still exist that could contribute to disputed election results down the ballot this November.

Experts recommend voting by mail no later than mid-October to allow time to cure ballots if any problems arise. The two week early voting window to vote in person in Florida runs from Oct. 19 – Nov. 1, 7 a.m. – 7 p.m.