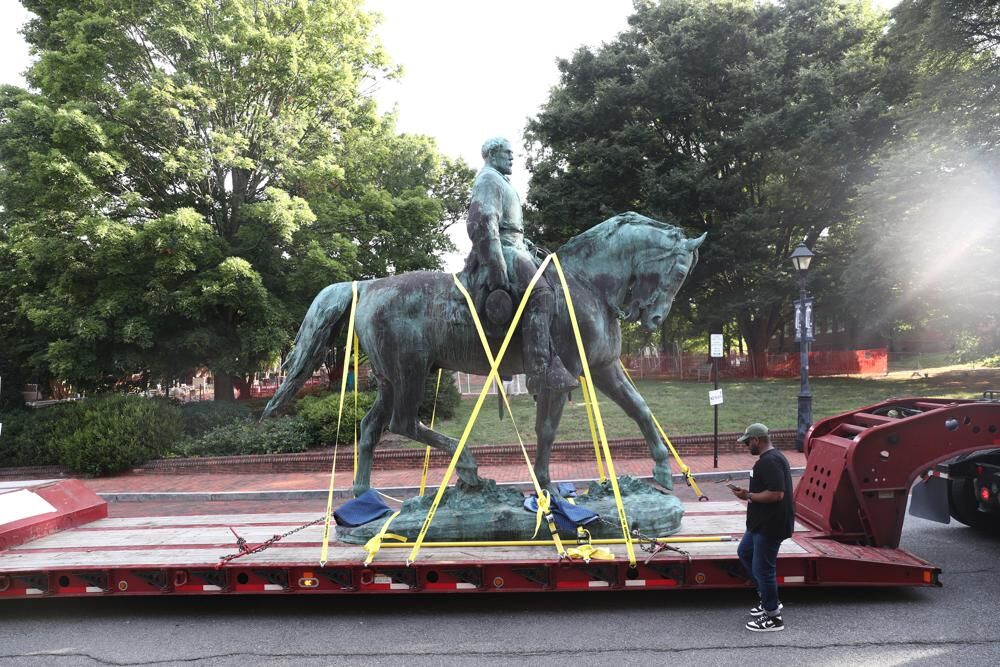 The Robert E. Lee monument is removed July 10, 2021, in Charlottesville, Va. The removal of the Lee and Jackson statues comes nearly four years after violence erupted at the infamous “Unite the Right” rally. 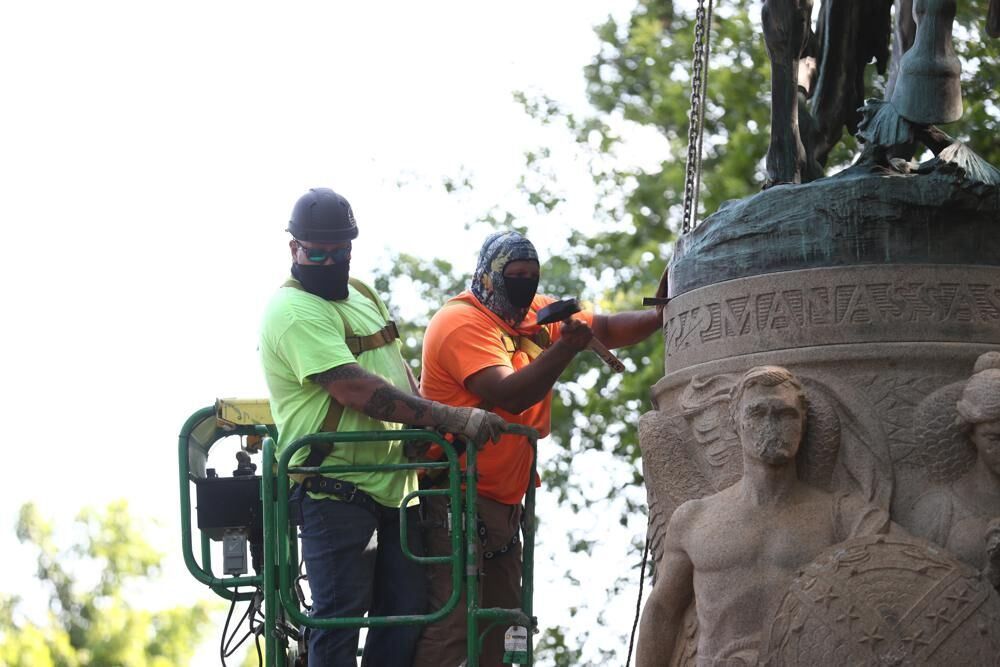 A Stonewall Jackson monument is prepared to be lifted from its pedestal July 10, 2021, in Charlottesville, Va. 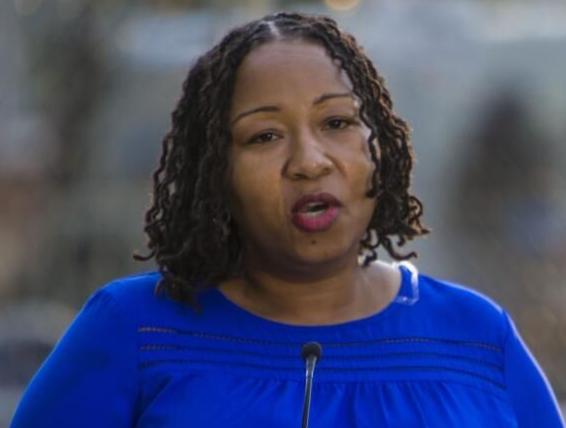 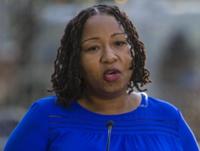 Cheers erupted Saturday as a Confederate statue that towered for nearly a century over downtown Charlottesville was carted away by truck from the Virginia city where it had become a flashpoint for racist protests and deadly violence.

It was a day of palpable joy and immense relief for scores of residents and visitors who lined neighboring streets to watch the larger-than-life figure of Gen. Robert E. Lee as it was hoisted from its pedestal and taken – at least for now – to storage.

The statue’s removal came more than five years after racial justice activists had renewed a push to take down the monument, an initiative that drew the attention of white supremacists and other racist groups, culminating in the violent “Unite the Right” rally in 2017.

“I’m ecstatic that we’re here now. It’s sad that it’s taken so much to get us to this point. But this is an incredible day,” said Don Gathers, a local Black activist who long advocated for the statue’s removal.

Work to remove Lee’s statue, and one of Confederate Gen. Thomas “Stonewall” Jackson shortly after, proceeded peacefully and without interruption. It was a project held up for years by a long, winding legal fight coupled with changes in a state law that protected war memorials.

Also removed Saturday was a statue depicting Sacagawea and explorers Meriwether Lewis and William Clark, which has been criticized for a depiction of the Native American guide and interpreter some view as subservient and weak.

Couples, families with small children and activists watched the removal on Saturday. The crowd intermittently chanted and cheered as progress was made fairly quickly. Hymns at one point wafted down the street as musicians performed from the front steps of a church.

“Good atmosphere, good vibes, good energy,” said Jim Henson, a resident of a nearby community who came to witness the “historic” event.

Ralph Dixon, a 59-year-old Black man born and raised in Charlottesville, was documenting Saturday’s activities, a camera draped around his neck. He recalled that he was brought as a schoolchild to the park where the Lee statue stood.

“All the teachers, my teachers anyway, were always talking about what a great person this was,” he said.

He said his understanding of Lee’s legacy and the statue’s message evolved as he matured. He added it was important to understand the statue was erected not directly after the Civil War, but during the Jim Crow era when Black Americans’ rights were being stripped away.

Especially after the violence of Aug. 12, 2017, which left 32-year-old Heather Heyer dead and dozens more injured after a car plowed into a crowd of peaceful counterprotesters, Dixon said there was no reason it should stay. A Virginia State Police helicopter assisting with the rally also crashed that weekend, killing the pilot and a trooper.

“Unite the Right” drew neo-Nazis, skinheads, Klansmen and other racist groups for what was the largest gathering of such far-right extremists in at least a decade.

They met at the base of the Lee statue and then brawled in the streets nearby with anti-racist counterprotesters before the car attack. The violence sparked a national debate over racial equity, further inflamed by former President Donald Trump’s insistence that there was “blame on both sides.”

The most recent push focused on removing the Lee monument began in 2016, thanks partly to a petition started by a Black high school student, Zyahna Bryant. After the City Council voted to remove it, a lawsuit was quickly filed, putting the plans on hold. White supremacists then began to seize on the issue.

“To the young people out there, I hope that this empowers you to speak up on the issues that matter, and to take charge in your own cities and communities,” Bryant said, standing beside Mayor Nikuyah Walker while addressing the crowd before removal work began. “No platform for white supremacy. No platform for racism. And no platform for hate.”

On Saturday, there were at least a handful of opponents of the removal present, including a man who heckled Walker after she spoke. But there was no visible, organized counterprotest presence. Many who object to taking down Confederate monuments say doing so amounts to erasing history.

Charles “Buddy” Weber, a local attorney who was a plaintiff in the lawsuit against the city, said in a phone interview that he wondered if history will view the push to remove monuments as a sincere and effective attempt at racial reconciliation.

“My personal view is that this act is not going to improve the life of anybody in the city of Charlottesville,” he said.

The city had announced the plans for Saturday only a day prior. Earlier in the week, Charlottesville had finally completed procedural steps necessary under a new state law to legally begin the removals.

After the Lee statue was gone, both workers and the crowd moved to a park about two blocks away for the Jackson statue removal. It took nearly an hour after a crane lifted the statue off its pedestal to situate the piece on a truck and secure it. But instead of dwindling, the crowd grew, many waiting with rapt attention to see it hauled away.

“It’s quite a day. It’s just a feeling of relief to see that statue be dragged out of here backwards and back into history where it belongs,” Rabbi Tom Gutherz of the nearby Congregation Beth Israel said after the truck rumbled off, taking the Jackson monument away.

Only the statues, not their stone pedestals, were removed Saturday. They will be stored in a secure location until the City Council makes a final decision about what should be done with them.

Kristin Szakos, a former Charlottesville City Council member, said that “folks in this community have been trying to get these statues down for a hundred years. I think that we’re finally ready to be a community that doesn’t telegraph through our public art that we are pretty fine with white supremacy.”