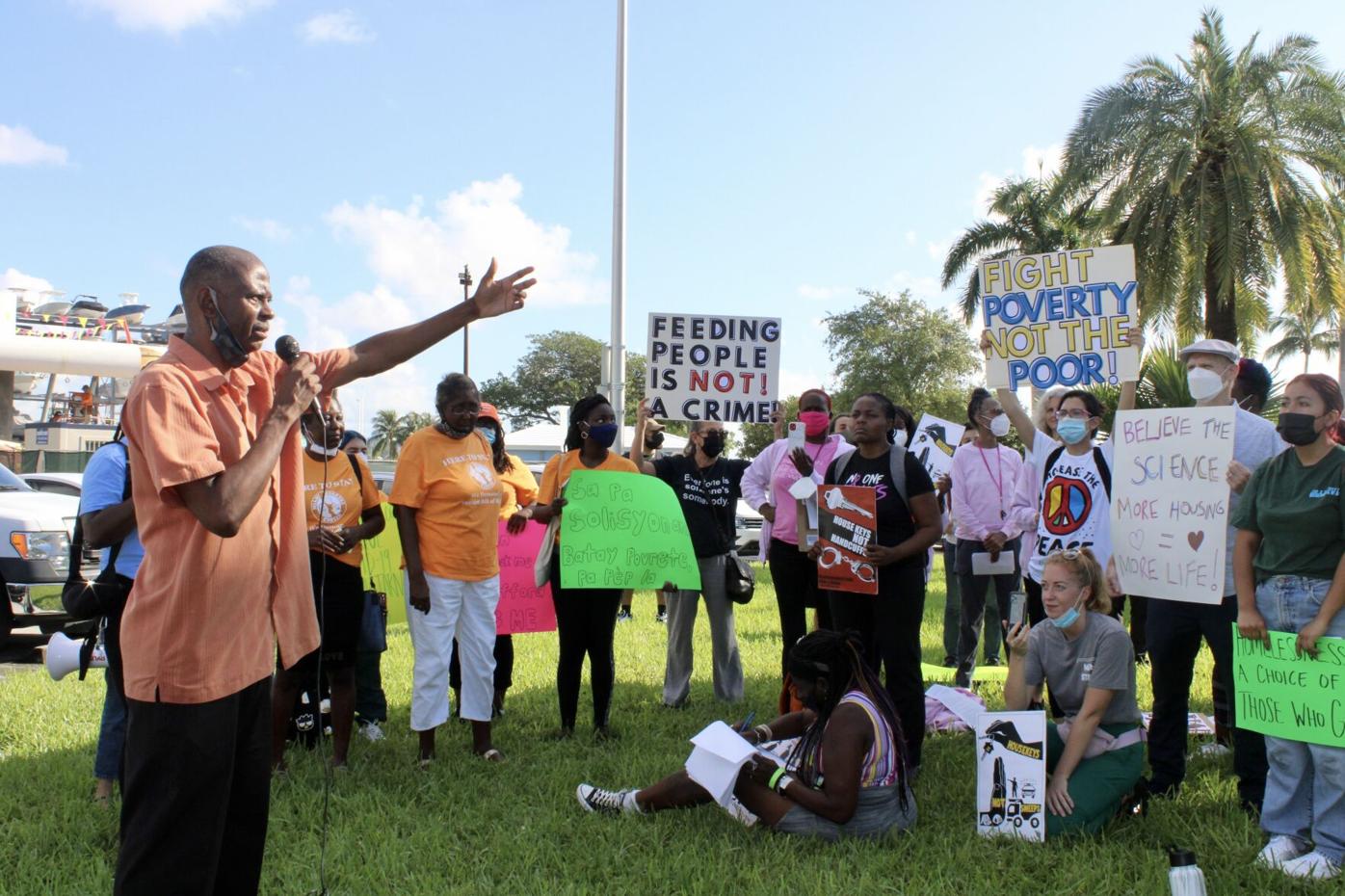 David Peery talks to a crowd of demonstrators at Miami City Hall in protest of an ordinance that would criminalize sleeping on city streets. 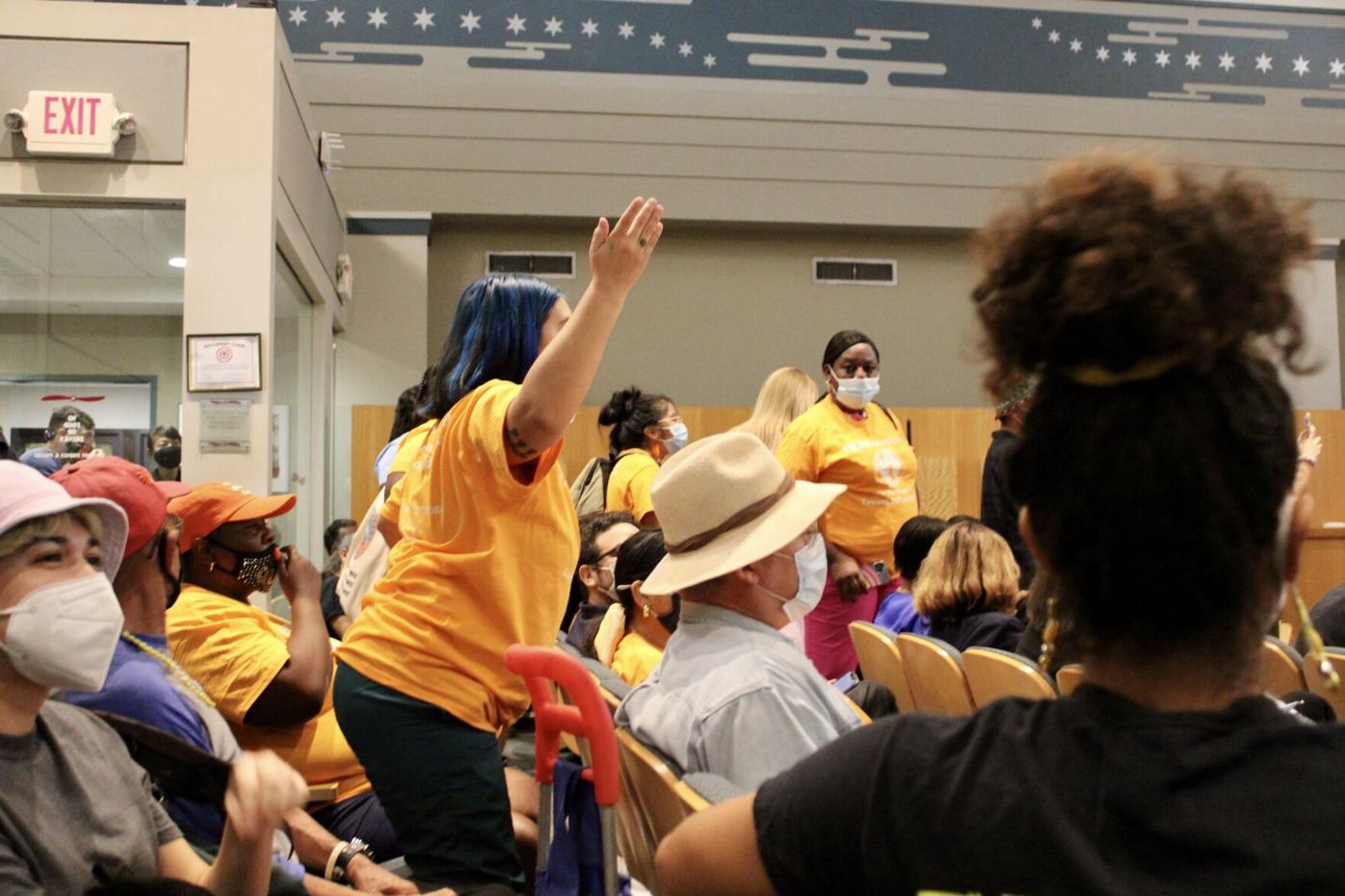 Activists shout in outrage as Commissioner Joe Carollo called the group hypocrites for speaking out against an anti-encampment ordinance. 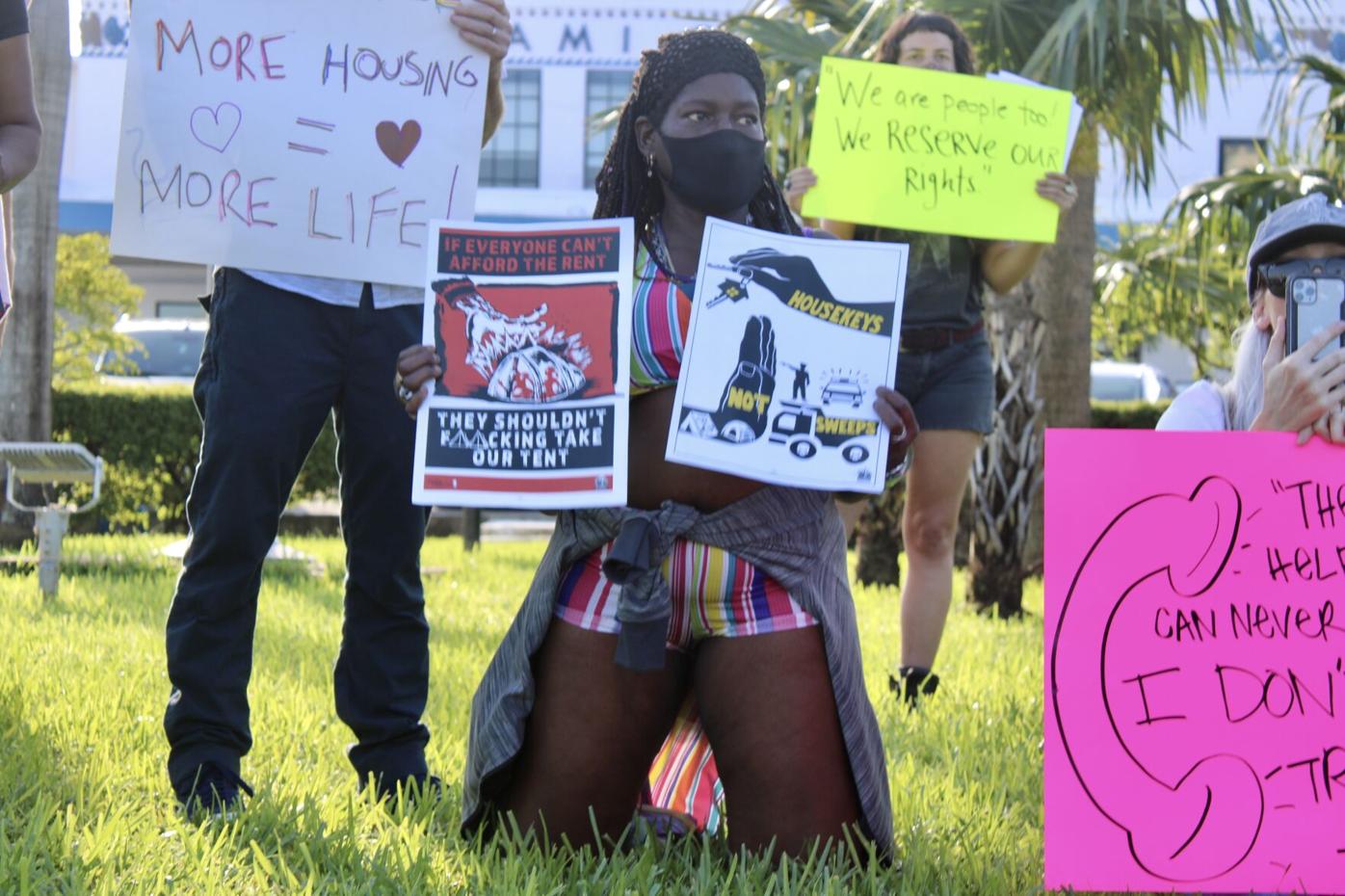 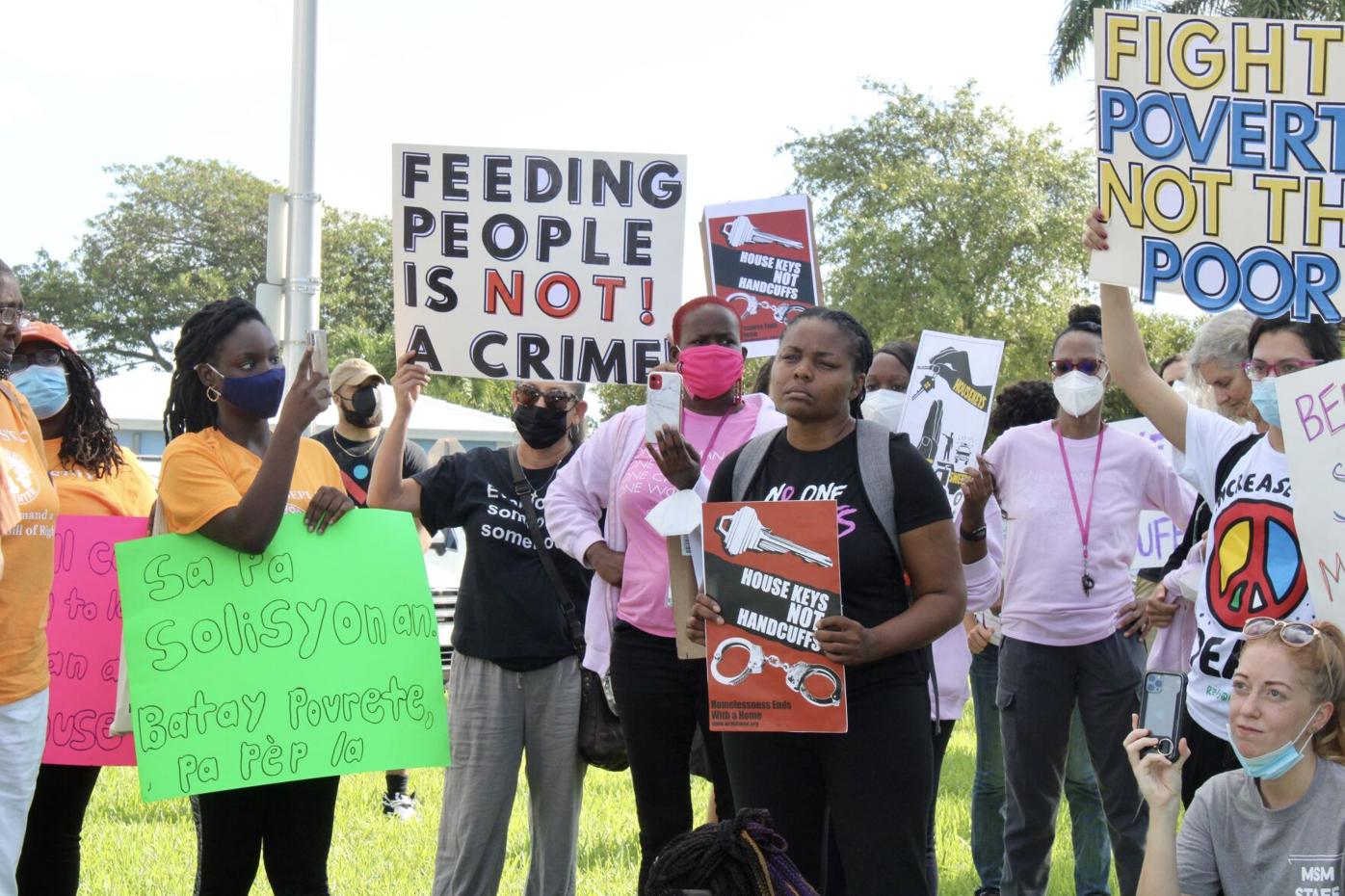 David Peery, who previously experienced homelessness as a victim of the 2008 recession, knows far too well how one unfortunate circumstance can drastically alter the trajectory of someone’s life.

Last Thursday, the attorney and activist channeled those painful memories into a demonstration at Miami City Hall. There, he encouraged a coalition of social justice and homeless advocacy groups who joined him in protest of a new ordinance, sponsored by District 3 Commissioner Joe Carollo, that makes encampments on public property illegal – and could potentially result in the arrest of hundreds of people.

Bearing signs condemning the criminalization of the homeless, dozens of demonstrators gathered on the lawn to chant “Housing is a human right. We need houses, not handcuffs,” in unison. Among them: formerly and currently homeless individuals wanting to share their stories with anyone who would listen.

Leaders from the Lotus House and Camillus House shelters, Miami Coalition to Advance Racial Equity (MCARE), October 22nd Alliance to End Homelessness, Miami Workers Center, Catalyst Miami, the Greater Miami Chapter of the ACLU and others showed up to voice their concerns during the protest and commission meeting.

“I felt like our voices needed to be heard. That’s why I came to protest,” said Cathedral Beauford, whose circumstances forced her into homelessness. “I’ve been in the shelter for years, I’ve lived on the streets and have been harassed by officers and security guards. I don’t want to go through that anymore.”

In presenting and supporting the ordinances, Carollo controversially implied that homelessness is a choice, and spoke of people purposefully coming to the city to engage in drugs and live on the streets.

“Many people in the community think that people want to be homeless, that they choose to be on the street and reject services,” said longtime activist Jeff Weinberger of the October 22nd Alliance. “None of this is true. It’s that the alternatives to living on the streets that the system presents are not real solutions.”

Weinberger blames low-wage jobs and the rising cost of living in Miami, which now surpasses Los Angeles as the second-most expensive place to live in the U.S.

“Unless we address the systemic reality, nothing is going to change. What we were there to oppose is a law that would have kept that cycle going,” said Weinberger.

A single stroke of bad luck

Peery, the founder of MCARE, says he couldn’t fathom the devastating impact a law like this could have had on his life if it were proposed back when he was living on the streets more than a decade ago.

After falling behind on rent after being laid off from H&R Block, he found himself locked out of his Miami apartment one Saturday morning coming back from a trip to a local charity that offered free breakfast for those with financial struggles.

He did not anticipate the locks would be changed without warning or that he’d spend the next few days in jail, accused of being a drug addict trying to break into the apartment, though his name was on the lease agreement.

Unable to retrieve the possessions inside his home, Peery was left with nothing and forced out on the streets to join the thousands of people experiencing homelessness in Miami.

“I lost everything I owned. Every single thing. I only had a couple of weeks’ worth of money to stay in hotels but that ran out,” he said. “For the next year and a half where I couldn’t get a job, I slept on the streets. I didn’t have familial support because I’d been estranged from my family.”

According to data released by the Miami-Dade County Homeless Trust last November, 57% of people experiencing homelessness in the county are Black, despite making up only 18% of the population. More than 40% of the county's homeless population is in the City of Miami.

“I have a law degree but that didn’t help me,” Peery said. “Once you’re homeless, it just compounds a cycle. I couldn’t get proper clothes that weren’t smelly or wrinkled so I could get to job interviews and it just got worse.”

If it hadn’t been for local resources and friends who helped him get a part-time job and temporary housing, he said he might not have made it to where he is today.

“That eventually got me off the streets, but you have to look at the systemic issues. The longer you’re out there, the harder it is to get out,” said Peery. “Homelessness is intensely traumatizing, so we’ve been working for a number of years now to mobilize people, to protest against efforts like this (ordinance).”

Peery’s experience compelled him to fight to preserve the Pottinger consent decree, a 1998 settlement that protected the rights of homeless people from unconstitutional acts by the city. The decree was terminated in 2019. Since then, activists say the city has come full circle to start enforcing codes the original settlement prevented.

“We’ve seen, over a number of years, that the city can comply with its duty to keep the streets clean and still respect the rights of people who are sleeping on the streets,” said Peery. “The thing that makes this ordinance so crazy is not only that a single tent or piece of cardboard can be considered to be an encampment, but also a multitude of possessions can now get you arrested or fined under this law.”

The ordinance, referred to as item 10623, was up for a second reading at last week’s commission meeting after passing with a 4-1 vote last month on the first reading. District 2 Commissioner Ken Russell was the opposing vote. It calls for the amendment of Chapter 37 in the city’s code of ordinances titled “Offenses-Miscellaneous.” The chapter outlines violations for behaviors ranging from malicious defacement and aggressive panhandling to living in vehicles and sleeping on streets.

Ordinance 10623 requests that a new section be added to the chapter to prohibit encampment on public property and define penalties for people who violate the code. The amendment enforces criminal or civil penalties for homeless individuals who are asked to leave their makeshift living space but refuse.

It’s one of many attempts by the commission to address homelessness in Miami.

In February, the group voted for a “City of Miami Street Clean Up and Encampment Resource Plan” that called for the sweeping of encampments in neighborhoods like Overtown, downtown Miami and Little Havana, a protocol increased to twice a week in April. Many housing unstable individuals say they’ve lost prized possessions during the sweeps.

Commissioners passed an ordinance last year that limits public feeding of people living on the streets by restricting where and when food distribution can take place.

The call for a collaborative plan

Following the outcry from activists and the Thursday protests, District 5 Commissioner Jeffrey Watson pleaded with his colleagues to defer a final decision on the ordinance to an Oct. 28 meeting.

“The reason we deferred it is to have a conversation with those activists who say they have a solution,” said Watson addressing those who approached the podium during the public comment portion of the meeting. “For those that want to talk about it, as you have asked, let the process take its course, see what then comes out of it, and you can come back (Oct. 28) ... We are concerned, otherwise, we would probably have moved forward.”

He asked activists to propose solutions that would work in favor of both the homeless and the city.

Despite intense disapproval and outburst from Carollo, who sarcastically suggested that the issue could be resolved if each demonstrator adopted a homeless person, many of the activists said they were happy to hear of the deferment.

“I think the fact that we’ve been pushing against this ordinance for quite a long time and editorializing it … that combined with the large presence that came to oppose the ordinance is what made [commissioners] pause,” said Weinberger. “It made them think ‘Maybe we’re not doing this the right way.’ It gives them time to think a little bit and gives us time to propose some firm alternatives.”

“We’re looking to formulate a plan that includes all the stakeholders to bring all the residents, not just the unhoused community, to sign on as well,” said Peery, hinting at a partnership with the Homeless Trust. “There has never been a plan where those diverse interests have all united together. But we think that this is a unique opportunity for us to do that.”

The first step, say both men, is to approach commissioners with demands that require a stop to encampment sweeps and the disposing of people’s possessions.

“With this commission, I don’t feel optimistic that they’re going to change their tune, but what we’re going to do is keep in the struggle,” said Weinberger. “Keep making our demands and bringing good people in the community to the struggle to pressure [commissioners] too, and we want to get to the point where the commission is not going to have a choice but to do what’s right.”