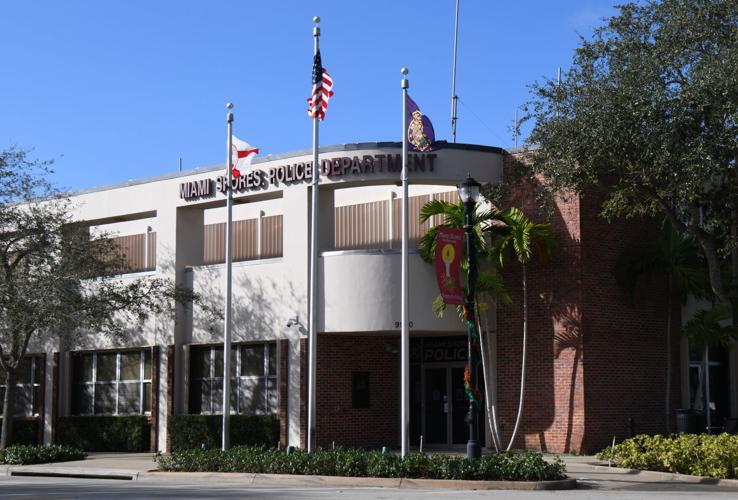 Miami Shores Police Station is at the center of controversy. 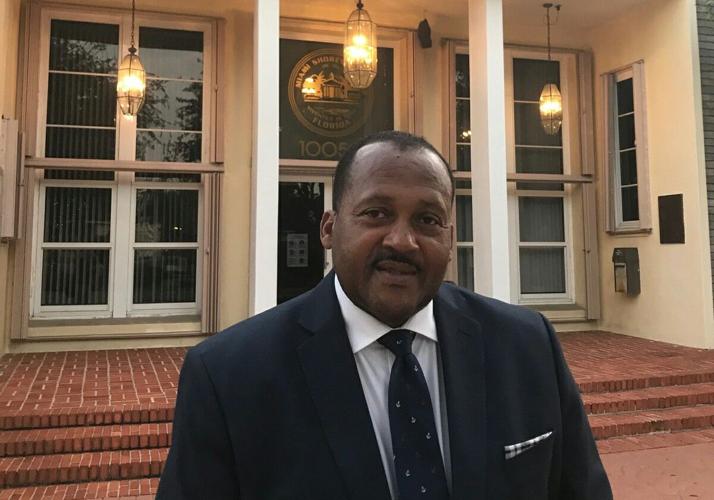 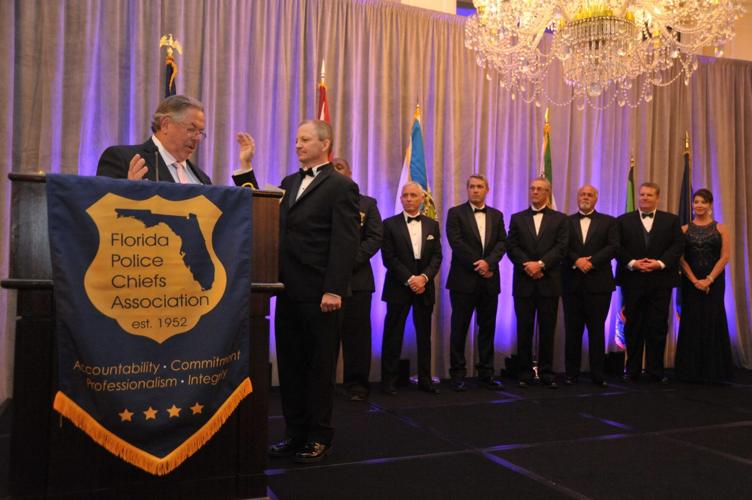 Then Miami Shores Police Chief Kevin Lystad with his executive board being sworn in as the Florida Police Chiefs Association FPCA’s 2017/2018 president. 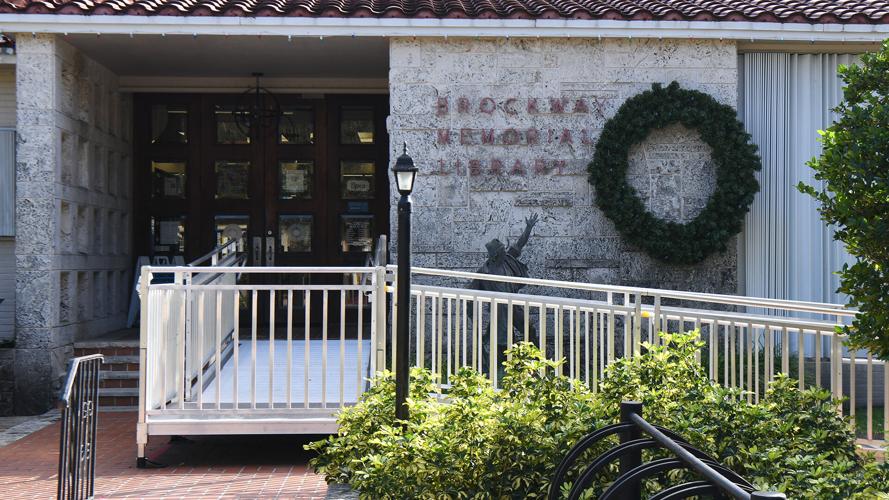 A police lieutenant was called to investigate three Black men who were sitting quietly in the library because they weren’t reading books. Turned out they just wanted to enjoy a bit of air conditioning. 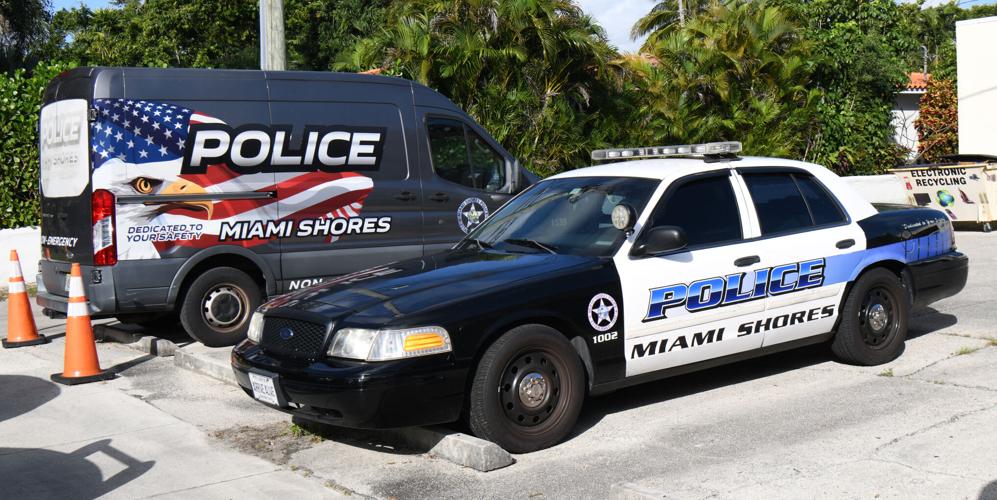 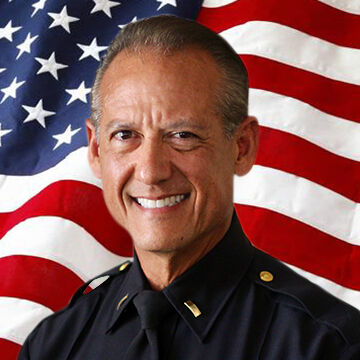 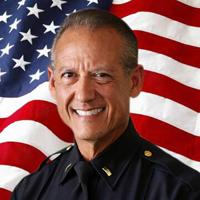 An explosive memo detailing serious issues within the Miami Shores police force was signed by James Somohano, a retired police lieutenant for the village, but he claims he isn’t its author. 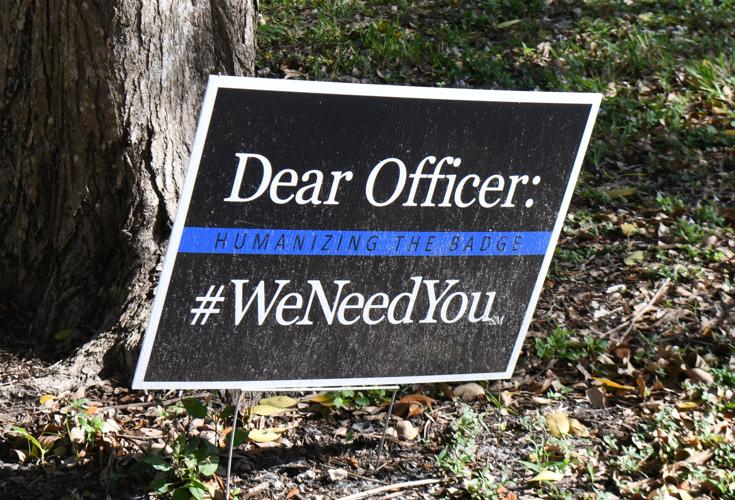 A sign on the lawn of a Miami Shores home references policing.

Echoing the type of accusations that beset many police departments, the new Miami Shores police chief will have to deal with complaints that officers were asked to interrogate Black men sitting quietly in a library – as well as charges officers slept through the night shift in their squad cars.

“I need someone who is a change agent,” said Esmond Scott, the village manager who’s in the process of selecting a new police chief.

Scott, who was hired in June, has inherited a mess with the police department. The biggest, and most bizarre, problems were sparked by a 64-page memo that detailed many problems with village police.

The memo’s creator identified themselves as James Somohano, a recently retired lieutenant. But shortly after the memo was distributed to the village council, the state attorney’s office and many others, Somohano claimed he didn’t write it.

“My personal information including my email address were compromised,” he emailed this reporter from the allegedly compromised email.

Who would have stolen Somohano’s identity and who else could have described confidential meetings that the memo writer described having with Kevin Lystad, who served as Miami Shores police chief until May? Somohano didn’t respond to follow-up inquiries.

Scott has turned the memo over to the Florida Department of Law Enforcement (FDLE) for investigation. Whoever the author is, Scott says, it’s important that the memo specifics be treated seriously.

“I’m not dealing with who did or didn’t write it,” he said. “I’m dealing with the document, the allegations. We need to make sure there’s no semblance of that in our police department.”

“In all my years of expert work, this is a first,” said Norm Stamper, who was a police officer for 34 years, rising to become Seattle’s police chief. He has a doctorate and has written two books on best police practices.

Stamper says he’d never before seen a public memo of such inside police actions that was “somehow disavowed and disowned. It’s important to access the accuracy of the statements, but you can see that they seem to reflect an insider’s view.”

Compared with the police killings of Black men in Ferguson, Mo., and Minneapolis, the Miami Shores incidents appear minor, but Stamper says they are more typical of what happens in many American communities.

In one 2018 incident, a village library employee called police about three “suspicious” Black men sitting in the library and not reading books. The memo writer stated he went to the library and talked to the men. He found “they had been working outdoors all day, were very hot and stated that they were just taking advantage of a little air conditioning. They asked if anything was wrong and I stated that there was not, and that they could remain where they were.”

In another incident, two residents, Dynise and William Perry III, met with the memo writer and Lystad to complain that an officer had questioned a young Black man standing in his driveway “awaiting an Uber Eats delivery. Non-friendly dialogue followed between the officer and young man and eventually the officer drove off.”

The Perrys requested that policies be adopted “to keep incidents like this from recurring,” the memo stated. The chief said he’d look into the matter, but the memo writer says the chief never brought up the Perrys’ complaint again; the Perrys did not respond to several requests for comment.

Miami Shores, population 10,000, is 15% Black, but a high percentage of calls to police complain of suspicious behavior by Black men. Yet “no policy review or training or directive was ever contemplated,” the memo writer said, even after Black Lives Matter became a national rallying cry.

Stamper the racial incidents described in the memo are minor, but departments need firm “standards that bar racial discrimination and any form of racial bigotry … because almost all big problems start out small.”

What’s more, Stamper says the memo frequently details incidents that “there is plenty of justification for asking questions about standards in that organization.”

A glaring example in the memo concerned an officer who “had a long history of sleeping on duty.” Global-positioning devices showed that his squad car spent hours at the same spot during the midnight shift, an indication that the driver was snoozing on duty. The memo writer said he recommended a three-month suspension without pay for the main violator.

The chief never took action on that recommendation, the memo states, and in fact ordered the memo writer to stop using the global-positioning devices because officers had complained to the chief that they didn’t like the practice.

The memo writer said he did as ordered, but resumed in 2020 “after a string of burglaries” on the village’s western side over two days. He learned that there had been “no patrolling in those neighborhoods. The data also confirmed that yet another officer was sleeping at discreet locations in the village during the time the burglaries were actually occurring.” Still, the chief took no action.

The memo also discusses detectives shirking work, commanders sneaking out of work early and even a fellow lieutenant who was teaching a class at Miami Dade College while he was supposed to be working at the police station.

Lystad had his own problems. Last spring, blogger-gadfly Al Crespo posted a detailed complaint that Lystad had been allowed to retire on a full pension of $97,000 in 2019 and was immediately brought back by then village Manager Tom Benton with a contract that gave him an additional base pay of $156,000. Meanwhile, Lystad was working a side gig, operating a company in partnership with a man who had a contract with the village for tech services, Crespo charged.

In May, shortly after a first-ever Black majority took over the village council, the body voted to have an ethics committee investigate Lystad’s behavior, who then resigned shortly afterward.

Lystad ignored requests to be interviewed for this story.

Interim chief David Golt, who as a lieutenant appears 38 times in the 64-page memo, is one of 16 applicants who applied to become the permanent chief.

To create an impartial selection process, Scott says he assembled a review panel that includes a human resources professional, an attorney, a resident and a city manager. Scott, however, has sole authority to make the hire without council approval.

The panel selected five finalists: Golt and four outsiders. Scott says he’s running background checks on all five and plans to interview them in January.

“This village needs to know it’s protected by its police department,” Scott said. “We need a chief that’s reachable, accessible, understands community policing, a person who has an accreditation background,” because Scott wants the department accredited for following best practices – something the village is missing now.

How much should Miami Shores law enforcement to be criticized?

A retired resident who covered police news for many years notes that when people call reporting suspicious behavior, officers respond, “That’s what police do.”

That means residents appear to think Black men are acting suspiciously at a higher rate than they suspect whites. In fact, the memo writer points out that this inclination can be found even among elected officials.

During a village council discussion about crime held sometime before the current council took over, one councilperson stated “… and we all know what’s around us.” As council members knew, the areas south, north and west of Miami Shores tend to have a higher concentration of Black residents.

Scott, who is Black, treads carefully on the subject.

“You can’t change centuries of habit,” he said, “but at the same time, it would not be wise to paint everybody with a broad brush.”

The five-member council is also being cautious. None responded to requests for interviews for this story.

Scott says the FDLE hasn’t told him when its report might be finished, but he wants to make clear he supports the police.

“Please note that the men and women in our Miami Shores Village PD are hard-working law enforcement personnel,” he wrote in an email. “They, like I, are dedicated to the public safety of MSV and will not be deterred by anyone or anything that may seem to suggest otherwise.”

Meanwhile, some residents say that, since the memo was distributed, they’re seeing more officers patrolling the streets in squad cars and spending less time in Tinta y Café near the police station.