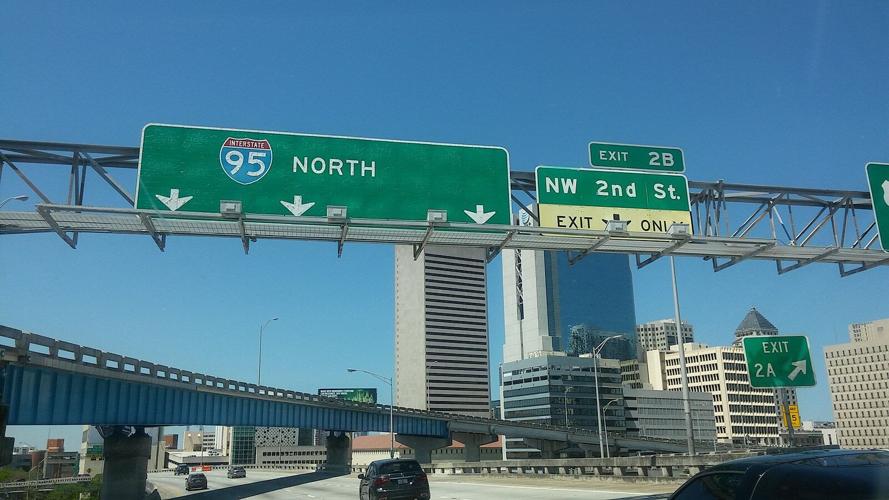 The Underdeck will sit under a soon-to-be reconstructed I-395, the highway that divided the neighborhood of Overtown decades ago. 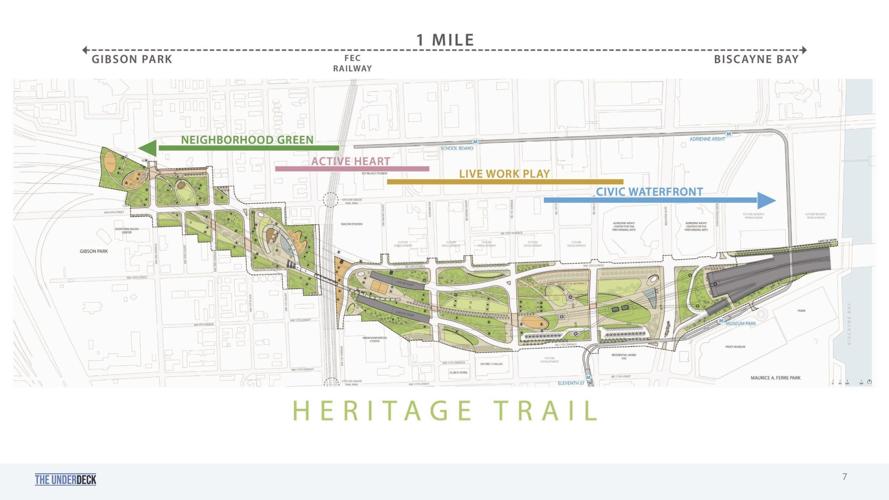 The current design for The Underdeck shows a one-mile, 33-acre open space landscape beginning in Overtown and extending to Biscayne Bay. 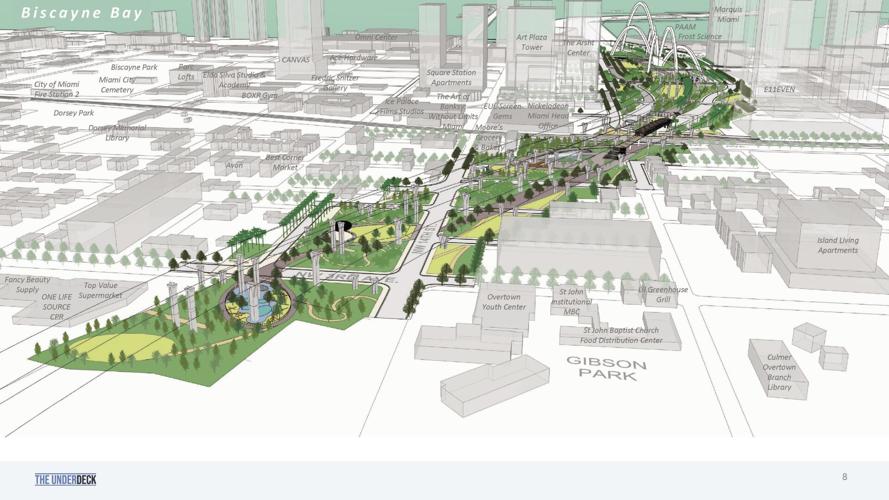 The Underdeck will feature open lawns, multiple interactive water features, and other amenities for residents and tourists. 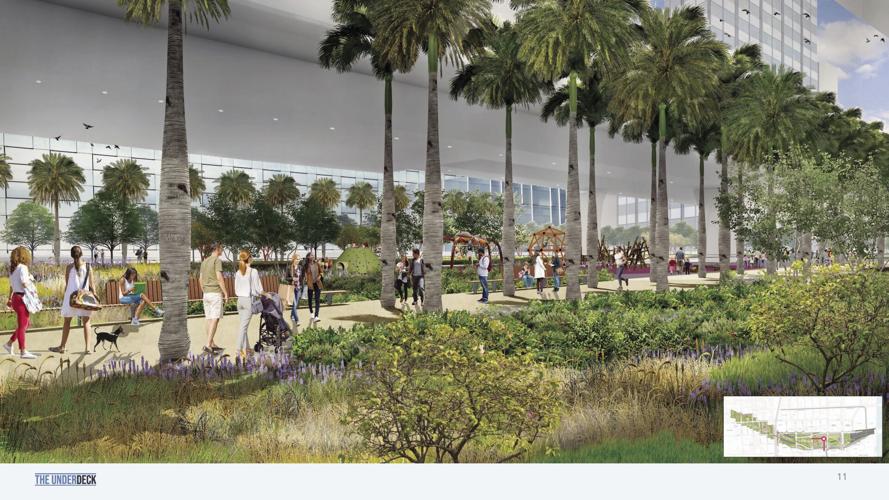 The Heritage trail will connect the east and west ends of The Underdeck.

The Florida Department of Transportation is collaborating with the city of Miami to create The Underdeck, a linear park under the soon-to-be reconstructed I-395. Although the challenge of planning a major area of recreation in the heart of the city is itself no walk in the park, the biggest controversy surrounds what may come off as an unexpected dilemma: the project’s name.

Residents of Overtown, where The Underdeck will begin near Gibson Park, want to reclaim the space where their neighborhood was once divided and destroyed by the original construction of the I-95 highway in the 1960s. But others are hesitant to attribute The Underdeck solely to Overtown when it will ultimately extend across the Florida East Coast Railway tracks toward Biscayne Bay, reaching key cultural institutions like the Adrienne Arsht Center for the Performing Arts.

The Underdeck committee, tasked with engaging and advocating on behalf of residents and stakeholders while creating its own plan for the park, has been hosting community meetings to discuss the branding process. During the first half of March, it held four virtual discussions to introduce the names it has come up with.

The names are divided into three groups. Group one focuses on “paying homage to Overtown and looking toward a connected future for Miami,” including names like “Towners Mile” and “Heritage Trail.” Group two vows to “[celebrate] the melding of people, neighborhoods and cultures that make up the rich fabric of Miami,” including names such as “Soul Mile” and “Legends Place.” Group three “[calls] for reconnection and coming together in the face of what the overpass has separated,” displaying names which emphasize the word “unity.”

Still, of the 15 suggestions that have been presented, only one references Overtown by name. For Overtown resident and business owner Emmanuel Washington, that’s a mistake.

“For the most part, I-395 and I-95 – the biggest community that it affected, physically, economically, spiritually and mentally, was the Overtown area, so to not even mention the name Overtown in the name, I think, would be a disservice to our community,” he said.

Washington has attended meetings both in person and virtually to express his opinions on the entire planning process. There, he’s introduced his personal name of choice: the “Overtown Renaissance Heritage Trail.”

Besides hosting monthly community meetings to gather feedback, The Underdeck committee also conducted a survey – available up until March 30 – to allow residents to choose from one of the 15 names or suggest their own. The committee now must gather those results and deliberate before updating the public on its next moves.

The next community meetings will be held April 19 and April 20 in Overtown and the Biscayne corridor, although exact locations have yet to be decided. The focus of the meetings will be to discuss finances, particularly where additional funding for the project can be extracted.

During the March meetings, the proposed design rendered by consulting firm Hargreaves Jones was presented to the community, and residents shared their reactions.

The plan houses a variety of what’s being identified as character zones, including the “Civic Waterfront” near the bay where the signature bridge begins; a 24-hour active urban zone around the Omni district known as “Live, Work, Play,” complete with a broad, open lawn and an interactive water feature; the “Active Heart” across the tracks that includes a dog park and a multi-use court; the “Neighborhood Green” zone, bringing event plazas, a “splash path” and a performance stage to Overtown; and finally, “ Heritage Trail,” which will serve as a spine for the project connecting the east and west ends.

In response, residents spoke about possible health-related effects that may arise from frequenting a dwelling space that’s located under a major highway. Some worried that the area and its public restrooms could be overrun by people experiencing homelessness. Others brought up safety, either for pedestrians crossing major intersections or for young people using the space during later hours.

Washington says he wants to make especially sure that Overtown residents will reap the economic benefits from the project.

“We have generational families that now have left Overtown because of economic reasons – because they can no longer afford it – and that’s because they weren’t given the economic opportunities to work on these [revitalization] projects,” he told The Miami Times.

All of these suggestions and more are being gathered by the committee, which assures that it is first and foremost an advocacy group looking out for the interests of residents, and will be deliberated upon before returning to the city with its proposed recommendations.

Miami’s first deliverable is due to the state June 30. The Underdeck Committee plans to submit its recommendations to the city manager by May 2, giving the municipality ample time to review them and provide feedback before its commission meeting June 23.

In the meantime, what The Underdeck’s name will be is an ongoing debate – one that committee chair member Nelson Adams is also interested in.

Adams, who was raised in Overtown and attends church in the neighborhood regularly, says he appreciates the notions of heritage, unity and peace that have all been considered throughout the branding process.

“How that looks – it’s kind of like making sausage,” he said. “All of those ingredients need to go in and, as for the outcome, hopefully it will be something that’s symbolic of all of that.”

To get involved, visit UnderdeckMiami.com.