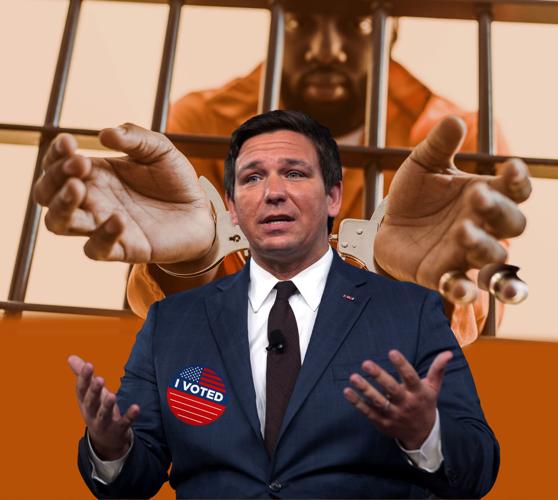 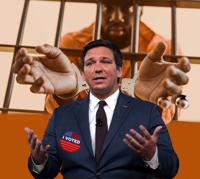 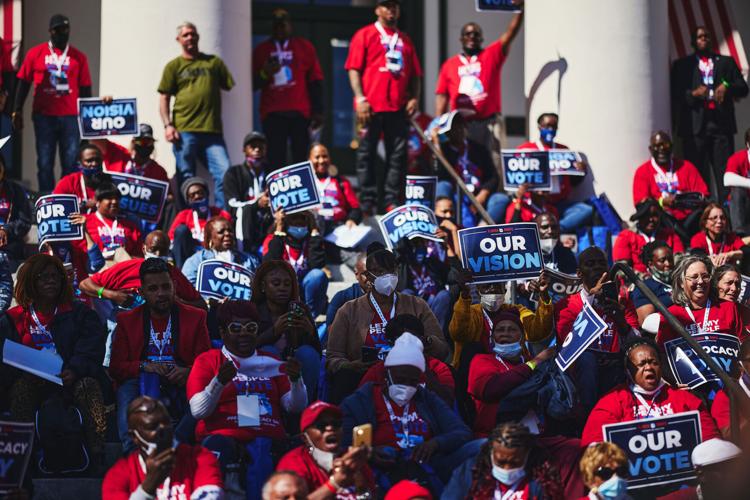 Members of the Florida Rights Restoration Coalition called for second chances at voting, housing and employment on the steps of the Florida Capitol Building earlier this year on Returning Citizens Legislative Advocacy Day. 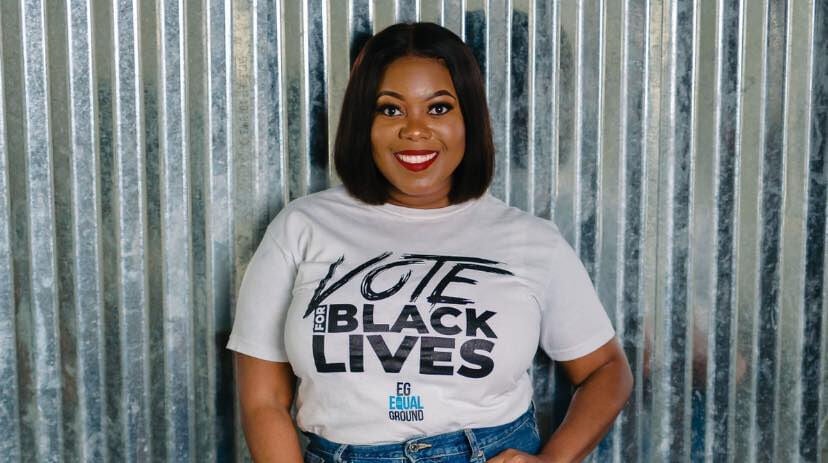 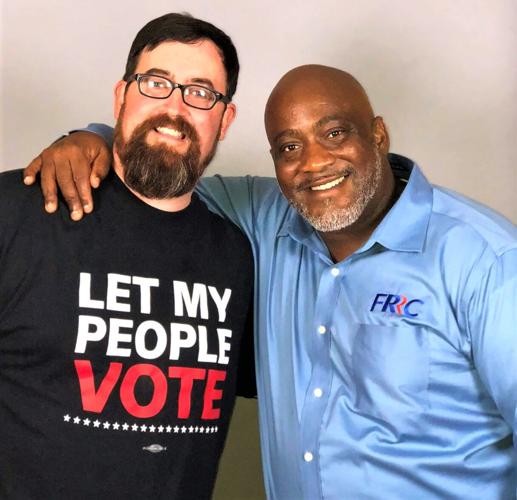 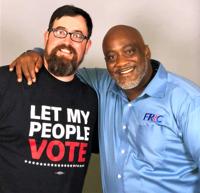 Neil Volz and Desmond Meade (L-R), ex-felons who hold directorial roles on the Florida Rights Restoration Coalition, lobbied for years to have voting rights restored for returning citizens. Both voted for the first time in 2020 thanks to Amendment 4. 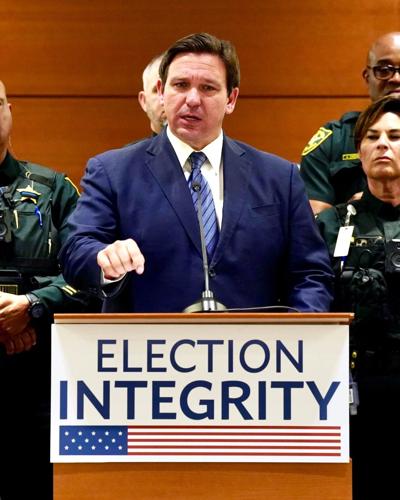 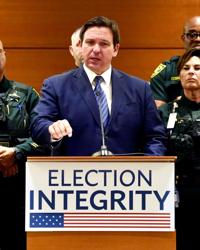 Florida Gov. Ron DeSantis at an Aug. 11, 2022, press conference announcing the arrest of 20 ex-felons who voted in 2020 after serving time for murder convictions or sexual offense crimes. 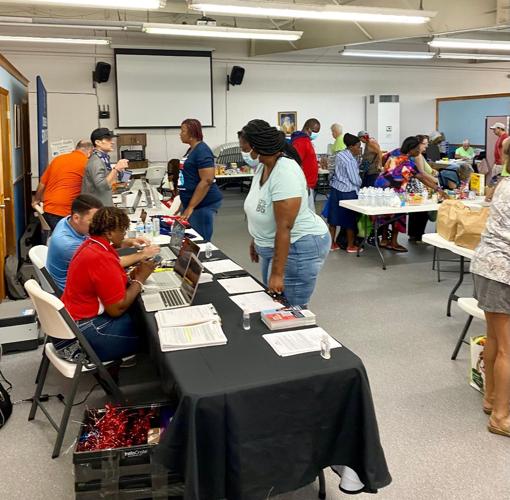 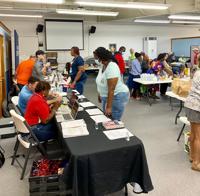 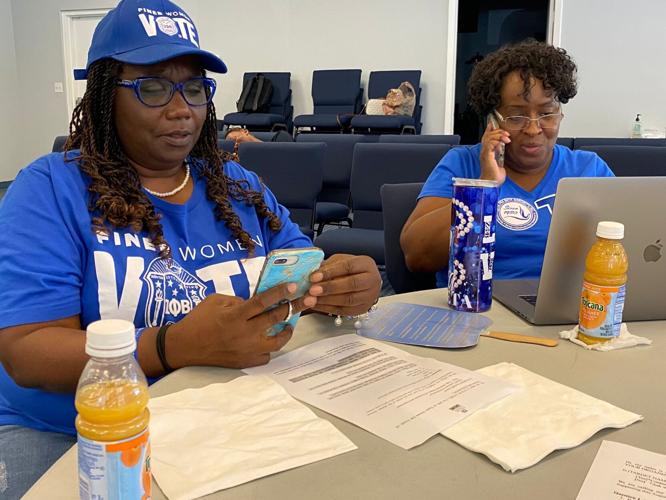 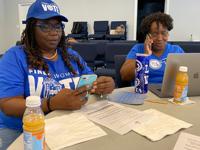 Zeta Phi Beta Sorority members volunteered in Miami-Dade County to encourage voters to go out and vote during a phone banking event Aug. 21, part of Equal Ground’s “Vote for Black Lives” campaign to mobilize voters in 2022.

Eight ex-felons from South Florida face the possibility of being jailed again for years after being arrested last week on voter fraud charges ahead of the Aug. 23 primaries.

They were among a group of 20 people identified by the state as having voted in the 2020 elections under the pretension of Amendment 4, which restores voting rights for Floridians with felony convictions who have completed their sentences, along with paying outstanding fines and fees.

Formerly incarcerated people with murder convictions or sexual offenses are not eligible to vote under Florida law despite Amendment 4, unless their rights are restored by the State Clemency Board.

Two of the individuals arrested live in Miami-Dade County, three are from Broward and the other 15 live across Palm Beach, Hillsborough and Orange counties. They each face one count of false affirmation and voting as an unqualified elector, according to the Florida Department of Law Enforcement (FDLE).

The charges are third-degree felonies punishable by a fine of up to $5,000 or five years in prison.

“It’s not just going to be 20 arrests,” said Florida Gov. Ron DeSantis at a press conference outside the Broward County Courthouse last Thursday.

He called the recent arrests an opening salvo of the state’s newly created elections police unit.

Some voting rights activists and local leaders questioned the timing of the announcement, made just days before constituents were scheduled to elect their respective representatives.

“The timing of it all is simply a scare tactic, and another tactic of voter suppression to intimidate and make folks second-guess their rights,” said Equal Ground Education and Action Fund founder Jasmine Burney-Clark, placing the blame squarely on election officials responsible for verifying voter eligibility.

“I do not think that it is fair that [the arrested voters] are the ones being charged when they filled out the form,” she continued. “The supervisor of elections certified it and added them to their voter rolls.”

Burney-Clark, who created the Black-led nonpartisan organization to increase voter turnout and education, recalled laws passed since the 2020 elections that altered the vote by mail (VBM) and voter registration process.

She says the new set of stringent laws and elections police unit may be the cause of this year's reduced voter turnout as compared to last year. An estimated 2.6 million VBM ballots had not been returned as of Monday afternoon.

“Election integrity measures do not intimidate legal voters from participating in the democratic process,” Bryan Griffin, press secretary in the governor’s office, told The Miami Times. “As the governor has stated at every public occasion on the topic, our efforts are to make it easier to vote and harder to cheat. Our actions to ensure elections are fair, safe and secure are designed to intimidate only those who intend to act fraudulently.”

When asked why it took the state two years to discover the ineligibility of the voters, Griffin credited SB 524 in leading officials to make the discovery. The bill, which passed in April, created the Office of Election Crimes and Security within the Department of State to require a registration list maintenance program, observance of ballot duplication and assessment of penalties associated with voting crime.

“We received allegations from Department of State and we investigated that and determined that there were violations of Florida Statutes,” said Gretl Plessinger, FDLE public information officer, disclosing that the allegations were brought to the investigation agency’s attention approximately a month ago.

Mark Glass, FDLE acting commissioner, told the media that more arrests are expected to occur. Elections supervisors are instructed to preserve records until the investigation and review is completed.

“It seems as though they are prioritizing outlawing the returning citizens as opposed to looking at how flawed their current systems are and fixing them so this doesn’t happen again,” said Burney-Clark. “This mistake happens when a state has not done its due diligence ... it did not catch this on the front end. The supervisors, the Secretary of State and this new task force are falling short on their job to make sure that our state has fair elections and that no one is placed in this position.”

A few of those arrested told reporters they genuinely believed their past convictions did not stand in the way of their voting eligibility in 2020.

Two Orange County residents, according to investigative documents and WKMG, had reportedly received verbal verification of their voter status from law enforcement personnel that prompted them to believe their voting rights had indeed been restored.

The media also has just learned of four other voting-related arrests made at an affluent Sumter County, Fla., retirement community popular with Republicans and full of Trump supporters, known as The Villages. Those arrests were made more than six months ago following anonymous emails sent to the Secretary of State regarding several double voting incidents. Three of the defendants admitted to voting twice in 2020 and were offered pretrial intervention contracts that could permanently defer their prosecution, according to WPLG. They would otherwise face up to five years in prison.

“This is a harsh reminder of how important it is for us to get our systems right,” said Neil Volz, former GOP lobbyist and deputy director of the Florida Rights Restoration Coalition (FRRC), about the news. “This could have been avoided if we would have set up a system in place that would allow people to know their voting eligibility on the front end of the process before they get their voter ID, rather than what we have now, which is spending millions of taxpayer dollars and time from law enforcement and the courts to look at people's eligibility years later.”

He alluded to other states, such as North Carolina and Louisiana, where ex-felons are informed of their eligibility beforehand.

“This is a tactic by the state to take away the real issue (of) focusing on the work that they haven’t done,” she said. “And that’s creating a centralized place where returning citizens can verify their restoration of rights with the state and confirm whether or not they have received the ability to vote.”

Supporting a system of integrity

An ex-felon himself, Volz, who had his voting rights restored in time to vote in the 2020 elections, said he was devastated to hear of the arrests considering his past and FRRC’S critical role in the amendment’s passage.

Since its 2010 inception, FRRC has been committed to empowering those impacted by the criminal justice system and eliminating barriers to democracy and economic mobility for said individuals.

Volz lobbied with Desmond Meade, also an ex-felon and a voting rights activist and the current executive director of FRRC, about five years later to get a voting rights restoration amendment referendum on the ballot.

It finally happened in 2018. Florida voters passed the amendment with 65% of the votes, allowing an estimated 1.4 million ex-felons to be granted voting rights.

In 2019, members of the Senate Criminal Justice Committee, who were curious about the parameters of the new law, wondered whether attempted murder and abortion would fall under the “murder” category for exclusions. Ultimately, legislators decided first- and second-degree murder convictions would disqualify ex-felons from voting but discounted attempted murder.

“We feel this is deeper than politics. This isn’t a political science exercise for the people who are directly impacted by what’s going on,” said Volz. “We know the heartache of the families and those impacted, and we also believe strongly in the sanctity and sacredness of our election systems. There isn’t a better evangelist for democracy than somebody who lost the right to vote and got it back.”

Equal Ground and FRCC leaders have been working together to educate people, pointing them to resources available within the state and pushing for a better system to restore voting rights.

“Election integrity starts with having a system that citizens can rely on,” Meade tweeted in response to the arrests.

“We can only do so much when the state allows them to receive their voter registration card,” said Burney-Clark.

Arrest of voting felons strikes a glare over Amendment 4