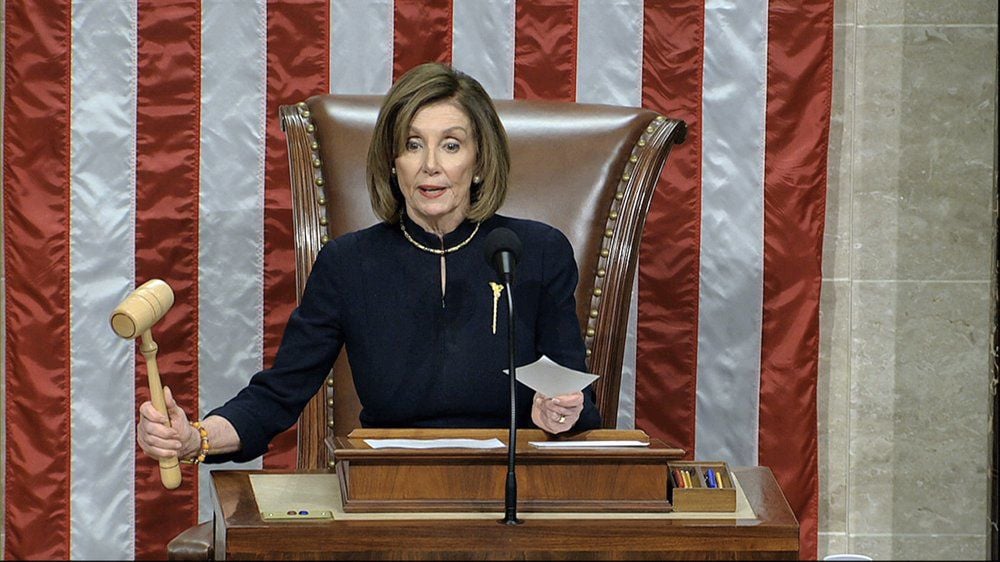 House Speaker Nancy Pelosi of California, announces the passage of the first article of impeachment, abuse of power, against President Donald Trump by the House of Representatives at the Capitol in Washington, Wednesday, Dec. 18, 2019. 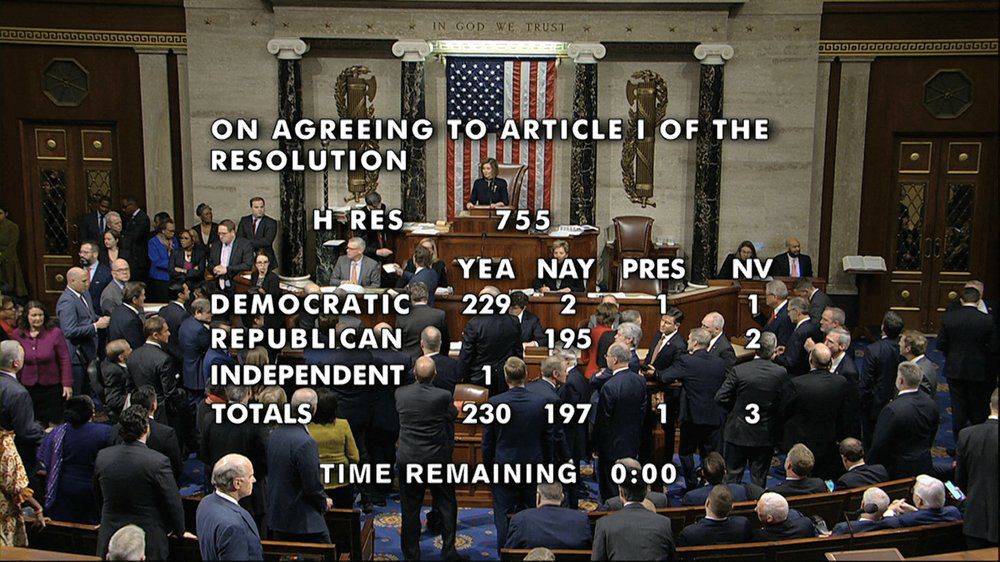 The vote total showing the the passage of the first article of impeachment, abuse of power, against President Donald Trump by the House of Representatives at the Capitol in Washington, Wednesday, Dec. 18, 2019.

President Donald Trump was impeached by the U.S. House of Representatives Wednesday night, becoming only the third American chief executive to be formally charged under the Constitution’s ultimate remedy for high crimes and misdemeanors.

The historic vote split along party lines, much the way it has divided the nation, over a charge that the 45th president abused the power of his office by enlisting a foreign government to investigate a political rival ahead of the 2020 election. The House then approved a second charge, that he obstructed Congress in its investigation.

The articles of impeachment, the political equivalent of an indictment, now go to the Senate for trial. If Trump is acquitted by the Republican-led chamber, as expected, he still would have to run for reelection carrying the enduring stain of impeachment on his purposely disruptive presidency.

“The president is impeached,” Pelosi declared after the vote. She called it “great day for the Constitution of the United States, a sad one for America that the president’s reckless activities necessitated us having to introduce articles of impeachment.”

Trump, who began Wednesday tweeting his anger at the proceedings, pumped his fist before an evening rally in Battle Creek, Michigan, boasting of “tremendous support” in the Republican Party and saying, “By the way it doesn’t feel like I’m being impeached.”

Democrats led Wednesday night’s voting, framed in what many said was their duty to protect the Constitution and uphold the nation’s system of checks and balances. Republicans stood by their party’s leader, who has frequently tested the bounds of civic norms. Trump called the whole affair a “witch hunt,” a “hoax” and a “sham,” and sometimes all three.

The trial is expected to begin in January in the Senate, where a vote of two-thirds is necessary for conviction. While Democrats had the majority in the House to impeach Trump, Republicans control the Senate and few if any are expected to diverge from plans to acquit the president ahead of early state election-year primary voting.

Pelosi, once reluctant to lead Democrats into a partisan impeachment, gaveled both votes closed, risking her majority and speakership to follow the effort to its House conclusion.