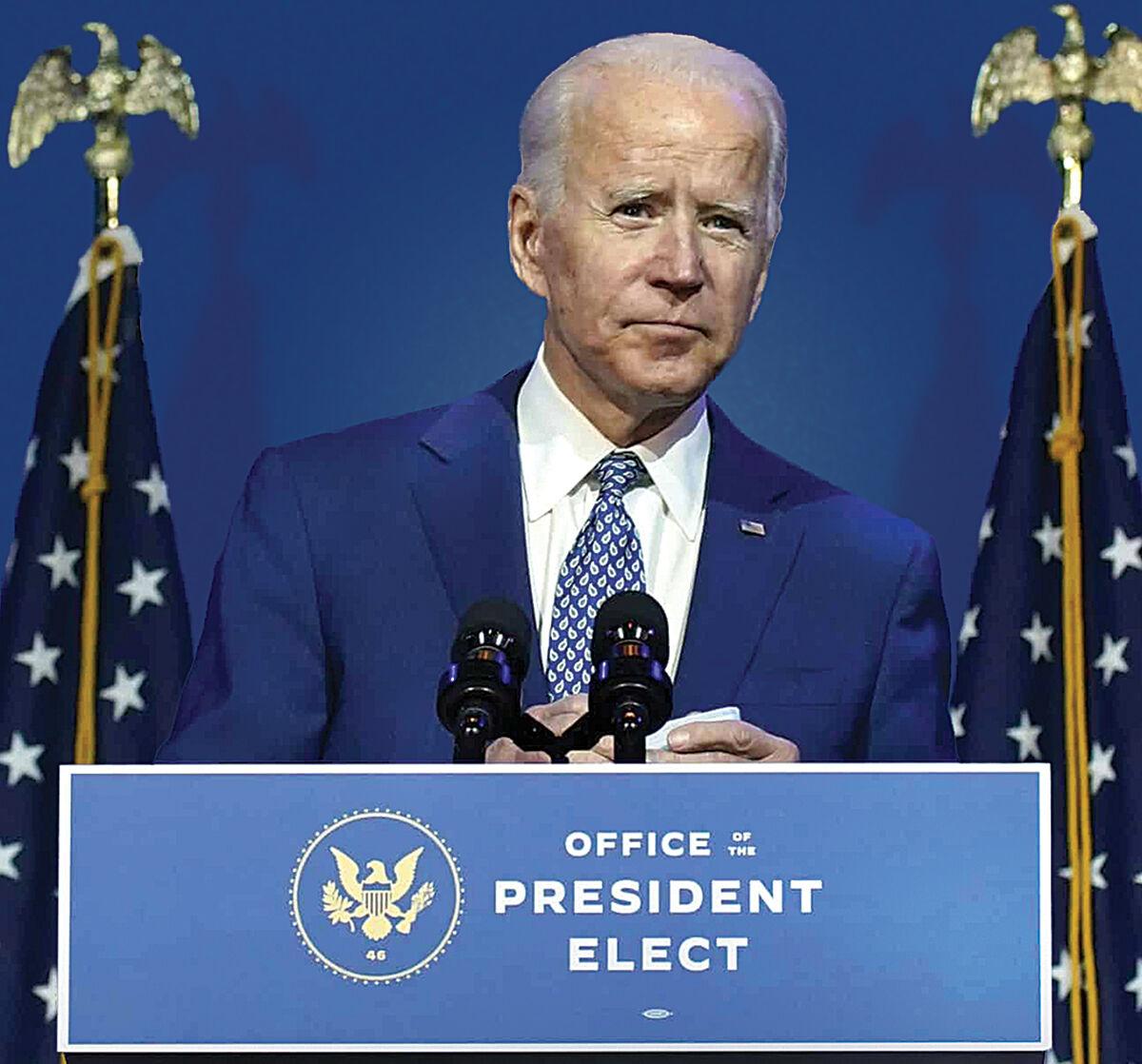 at The Queen, a performance venue in Wilmington, Delaware. 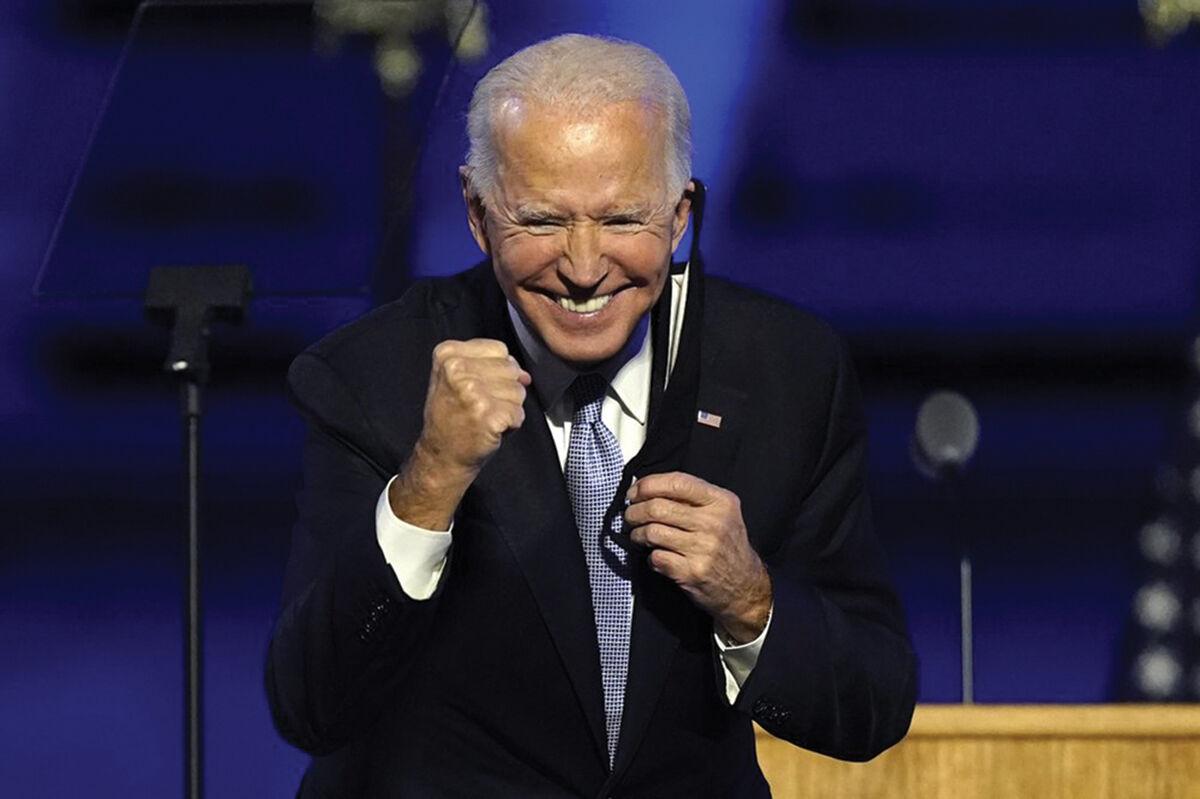 President-elect Joe Biden and Vice President-elect Kamala Harris were declared the victors five days after Election Day, but President Donald Trump has yet to concede, and continues to threaten to litigate his way out of defeat to overturn the will of the voters.

There is no sign so far that Trump will yield to pressure to cooperate with Biden’s team to ensure a smooth transfer of power when the new administration takes office in January.

The General Services Administration is tasked with formally recognizing Biden as president-elect, which begins the transition. But the agency’s Trump-appointed administrator, Emily Murphy, has not started the process and has given no guidance on when she will do so.

Those obstructionist tactics are fueling questions about how far Trump, who has falsely claimed the election was stolen, will impede Democrats as they try to establish a government.

“America’s national security and economic interests depend on the federal government signaling clearly and swiftly that the United States government will respect the will of the American people and engage in a smooth and peaceful transfer of power,” Jen Psaki, a Biden transition aide, tweeted Sunday.

It’s highly unusual for a sitting president to place such hurdles in front of his successor. The stakes are especially high this year because Biden will take office amid a raging pandemic, which will require a comprehensive government response.

Biden, who was elected the 46th president on Saturday, is taking steps to build a government despite questions about whether Trump will offer the traditional assistance.

He is focusing first on the virus, which has already killed nearly 240,000 people in the U.S. Biden on Monday announced details of a task force that will create a blueprint to attempt to bring the pandemic under control that he plans to begin implementing after assuming the presidency on Jan. 20.

Biden pledged in remarks Monday to work with “governors and local leaders of both parties” to craft a response to the coronavirus pandemic and called on Americans to “put aside the partisanship and the rhetoric that’s designed to demonize one another” and come together to fight the virus.

“It’s time to end the politicization of basic responsible public health steps, like mask wearing, social distancing,” he said. “We have to come together to heal the soul of this country so that we can effectively address this crisis as one country, where hardworking Americans have each other’s backs, and we’re united in our shared goal: defeating this virus.”

In his statement announcing the task force, Biden said that tackling the pandemic is “one of the most important battles our administration will face, and I will be informed by science and by experts.”

“The advisory board will help shape my approach to managing the surge in reported infections; ensuring vaccines are safe, effective and distributed efficiently, equitably and free; and protecting at-risk populations,” he said.

There are also 10 members, including two former Trump administration officials: Rick Bright, who said he was ousted as head of the Biomedical Advanced Research and Development Authority after criticizing the federal government’s response to the coronavirus, and Luciana Borio, who until last year was a biodefense specialist on the National Security Council.

The remainder of the panel includes experts with expertise in a number of areas, including Eric Goosby, who was President Barack Obama’s global AIDS coordinator.

Biden was also launching agency review teams, groups of transition staffers that have access to key agencies in the current administration. They will collect and review information such as budgetary and staffing decisions, pending regulations and other work in progress from current Trump administration staff at the departments to help Biden’s team prepare to transition.

But that process can’t begin in full until the GSA recognizes Biden as president-elect. The definition of what constitutes a clear election winner for the GSA is legally murky, making next steps unclear, especially in the short term.

The GSA’s leadership is supposed to act independently and in a nonpartisan manner, and at least some elements of the federal government already have begun implementing transition plans. Aviation officials, for instance, have restricted the airspace over Biden’s lakefront home in Wilmington, Delaware, while the Secret Service has begun using agents from its presidential protective detail for the president-elect and his family.

George W. Bush, the only living Republican former president, called Biden “a good man, who has won his opportunity to lead and unify our country.”

Transition planning also may hinge on two Senate races in Georgia that have advanced to a Jan. 5 runoff. If Republicans hold those seats, they’ll be in a position to slow confirmation of Biden’s top Cabinet choices and complicate his legislative goals, including calls for expanding access to health care and bolstering the post-pandemic economy with green jobs and infrastructure designed to combat climate change.

That could test Biden’s campaign pledge to move past the divisiveness of the Trump era and govern in a bipartisan manner.

While Biden’s aides acknowledged it would be easier for him to get his proposals enacted with Democrats controlling the Senate, Stef Feldman, the policy director on his campaign, said Biden has been known for working with Republicans to move legislation.

Those close to Biden say he will navigate the period ahead by harnessing his sense of empathy that became a trademark of his campaign.

Biden is looking to build out his White House staff with more traditional Washington insiders, a notable departure from four years in which Trump filled his team with outsiders and government antagonists.

Ron Klain is an early favorite to become Biden’s chief of staff, according to multiple people familiar with planning who spoke on condition of anonymity to speak freely about private discussions. He has decades of Washington experience that includes being Biden’s chief of staff when he was vice president, in addition to serving as the Ebola response coordinator in 2014 and having a central role in the Obama administration’s financial crisis response.

South Carolina Rep. Jim Clyburn, an ally of Biden’s on Capitol Hill, said that if Trump continues to drag his feet, then he hopes that “my conservative friends in Congress will have an intervention.”

“This country is bigger than one person, and to allow the people of this country to suffer – we are near 245,000 deaths, and we’re still messing around and won’t get the relief that people need,” he said.

Indeed, some Republicans on Capitol Hill called for a smooth transition Monday. Maine Sen. Susan Collins, a moderate Republican and occasional Trump antagonist, congratulated Biden on his victory and said in a statement that “presidential transitions are important” and that Biden and Harris should “be given every opportunity to ensure that they are ready to govern on January 20th.”