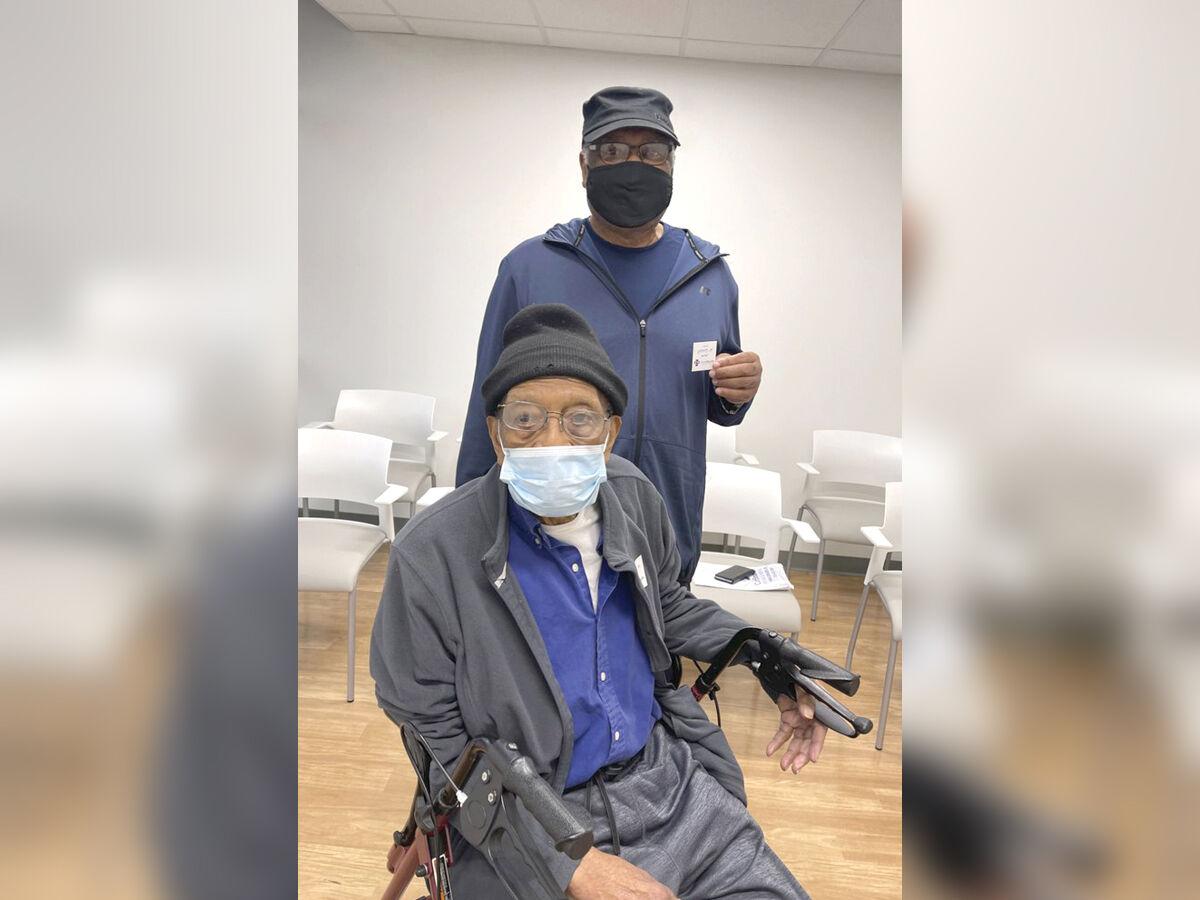 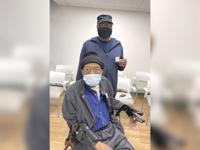 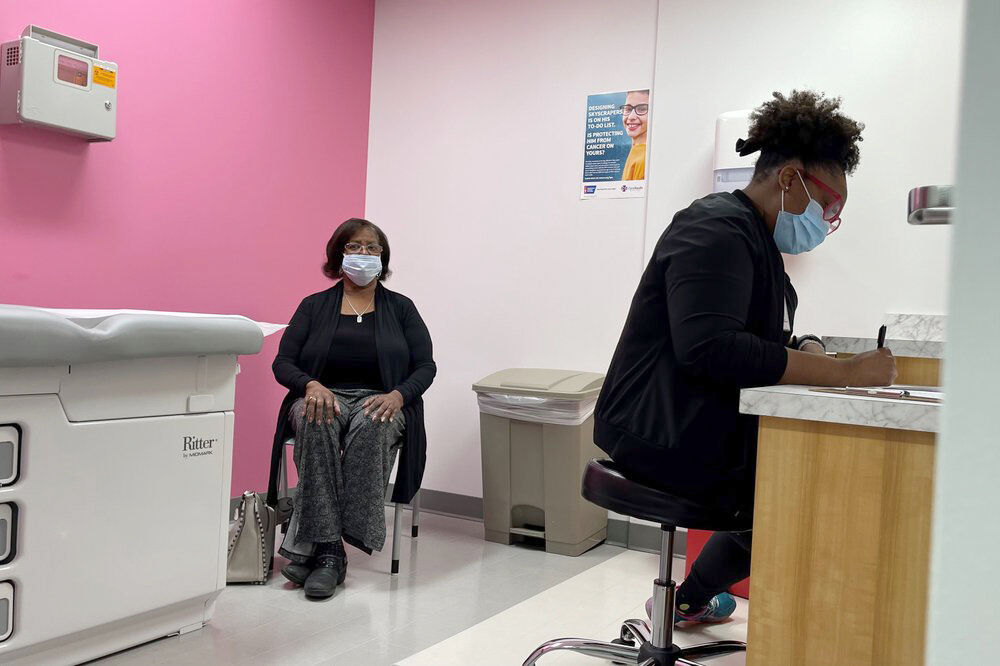 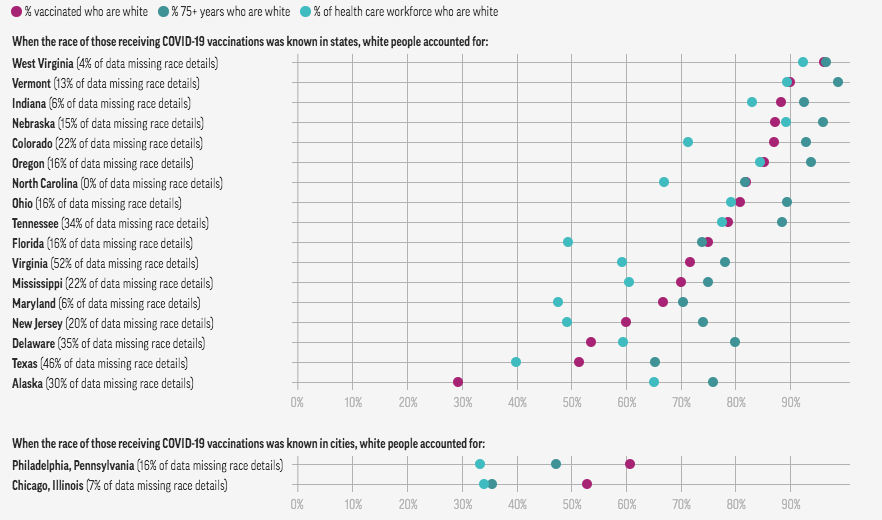 White people in most states vaccinated at expected levels

Data available from a number of states and a few cities show white people eligible for the vaccine have typically been getting vaccinated.

Data collected through Jan. 25. Some people vaccinated do not report race or ethnicity, those were left uncounted. States vary in whether they include or exclude Hispanic individuals in racial categories. We handle the racial categories in the comparison data in the same way within the state for consistency. Data reported from each state are those who have received at least one vaccine dose. 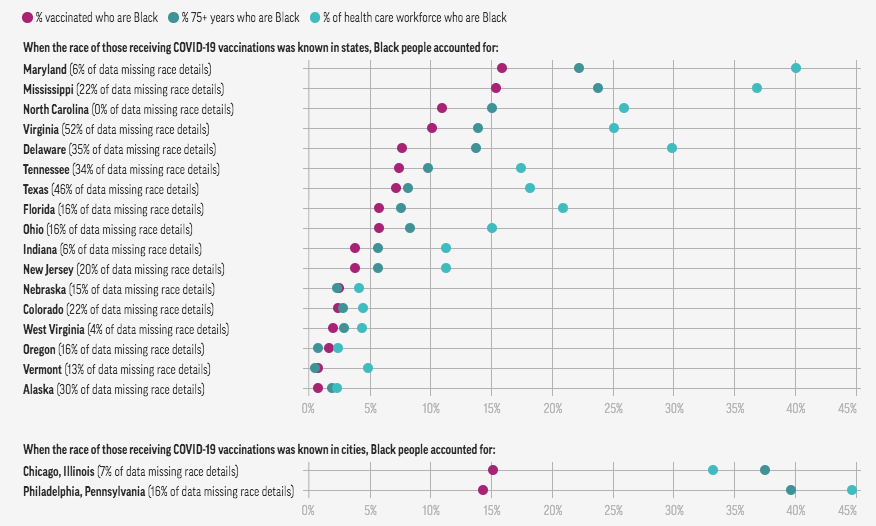 Data from a number of states and a few cities show fewer Black people receiving the vaccine than those who are eligible to receive it.

Data collected through Jan. 25. Some people vaccinated do not report race or ethnicity, those were left uncounted. States vary in whether they include or exclude Hispanic individuals in racial categories. We handle the racial categories in the comparison data in the same way within the state for consistency. Data reported from each state are those who have received at least one vaccine dose.

A racial gap has opened up in the nation’s COVID-19 vaccination drive, with Black Americans in many places lagging behind whites in receiving shots, an Associated Press analysis shows.

An early look at the 17 states and two cities that have released racial breakdowns through Jan. 25 found that Black people in all places are getting inoculated at levels below their share of the general population, in some cases significantly below.

That is true even though they constitute an oversize percentage of the nation’s health care workers, who were put at the front of the line for shots when the campaign began in mid-December.

The gap is deeply troubling to some, given that the coronavirus has taken a disproportionate toll in severe sickness and death on Black people in the U.S., where the scourge has killed more than 442,000 Americans. Black, Hispanic and Native American people are dying from COVID-19 at almost three times the rate of white people, according to the Centers for Disease Control and Prevention.

“We’re going to see a widening and exacerbation of the racial health inequities that were here before the pandemic and worsened during the pandemic if our communities cannot access the vaccine,” said Dr. Uché Blackstock, a New York emergency physician and CEO of Advancing Health Equity, an advocacy group that addresses bias and inequality.

Experts say several factors could be driving the emerging disparity, including deep distrust of the medical establishment among Black Americans because of a history of discriminatory treatment; inadequate access to the vaccine in Black neighborhoods; and a digital divide that can make it difficult to get crucial information. Vaccination sign-ups are being done to a large degree online.

“It’s frustrating and challenging,” said Dr. Michelle Fiscus, who runs Tennessee’s vaccination program, which is doubling the doses sent to some hard-hit rural counties but meeting with deep-rooted mistrust among some Black Tennesseans.

“We have to be working very hard to rebuild that trust and get these folks vaccinated,” Fiscus said. “They’re dying. They’re being hospitalized.”

President Joe Biden is trying to bring more equity to the vaccine rollout he inherited from the Trump administration. The Biden administration is encouraging states to map and target vulnerable neighborhoods using such tools as the CDC’s social vulnerability index, which incorporates data on race, poverty, crowded housing and other factors.

“We are going to take extra steps to get to the people hardest to reach, and that work is happening right now,” said Dr. Marcella Nunez-Smith, chair of Biden’s COVID-19 equity task force.

Most states have yet to release any racial data on who has been vaccinated. Even in the states that provided breakdowns, the data is often incomplete, with many records missing details on race. However, the missing information would not be enough to change the general picture in most cases.

The AP analysis found that whites are getting vaccinated at closer to or higher than expected levels in most of the states examined.

At the outset, health care workers and nursing home residents generally were given priority for shots in the U.S.

In the past couple of weeks, many states opened eligibility to a wider group of older people and more frontline workers, which could be further depressing the relative share of Black people getting vaccinated. The nation’s over-65 population is more heavily white than other age groups.

• In Chicago, Black people make up 30% of the population but only 15% of those are vaccinated. With Hispanics, the numbers are 29% versus 17%.

The vaccine drive has been slower and more problem-plagued than expected. Many Americans of all races have had trouble getting shots because the supply is limited. Overall, about 7% of Americans have received at least one dose. But there are other problems slowing vaccination among Black Americans and other groups, experts said.

“What we’ve heard over and over again: A lot of Black folks want to get it from their doctor or from their local clinic because that’s where the trust is,” said Dr. Thomas Dobbs, Mississippi’s health officer.

Other strategies underway in some states: providing transportation so people can get to their appointments and reaching homebound people via mobile vaccination units.