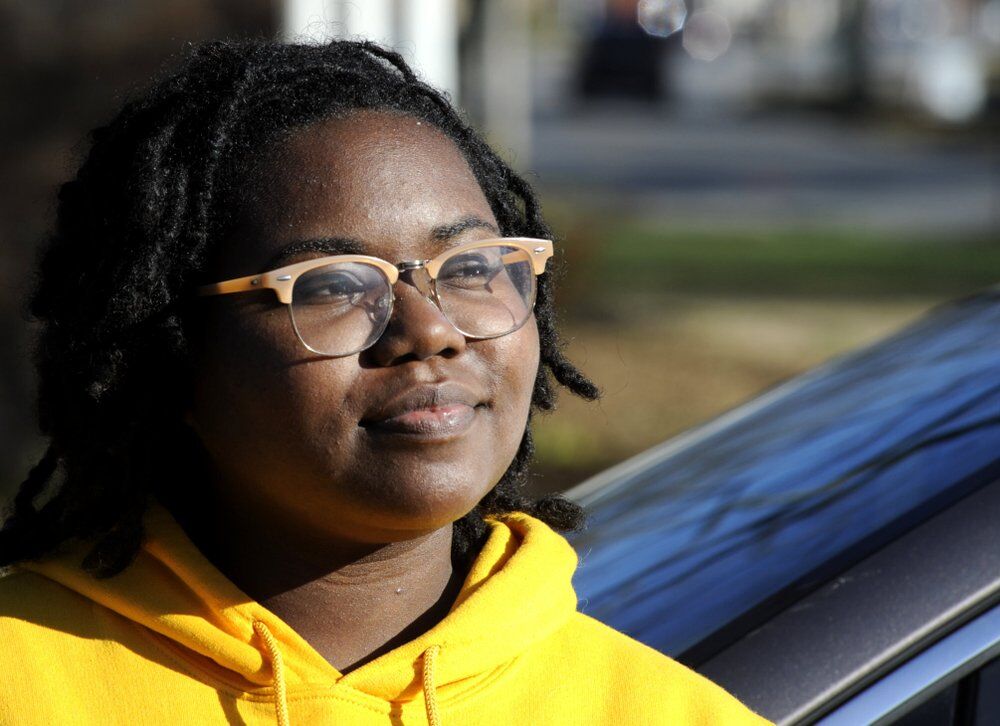 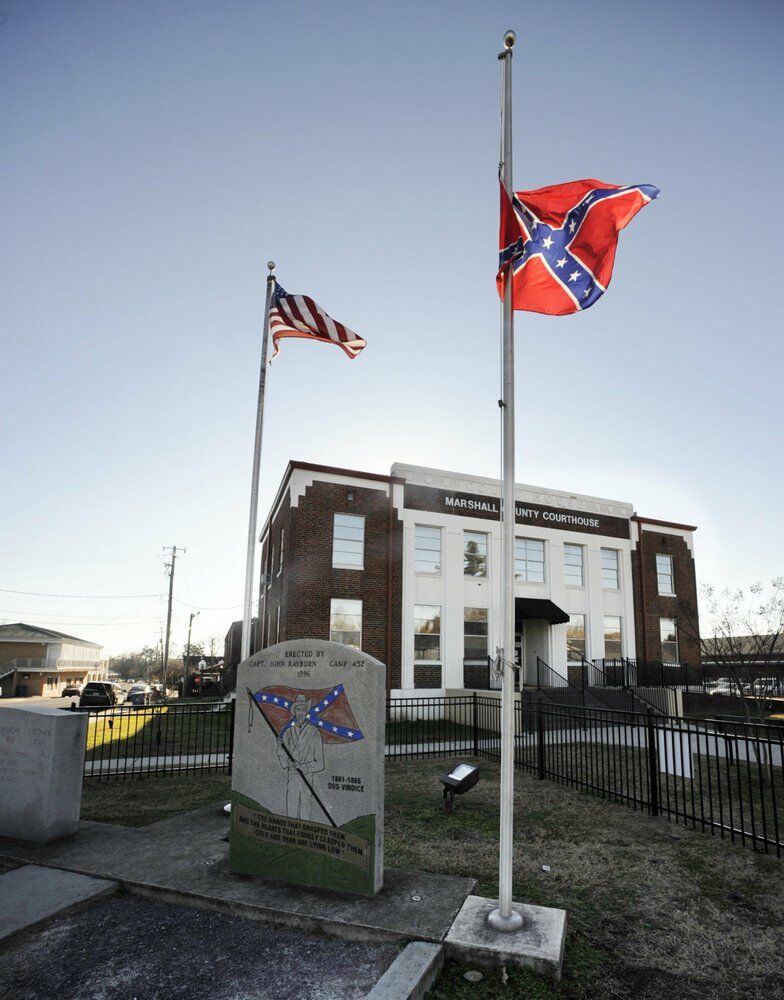 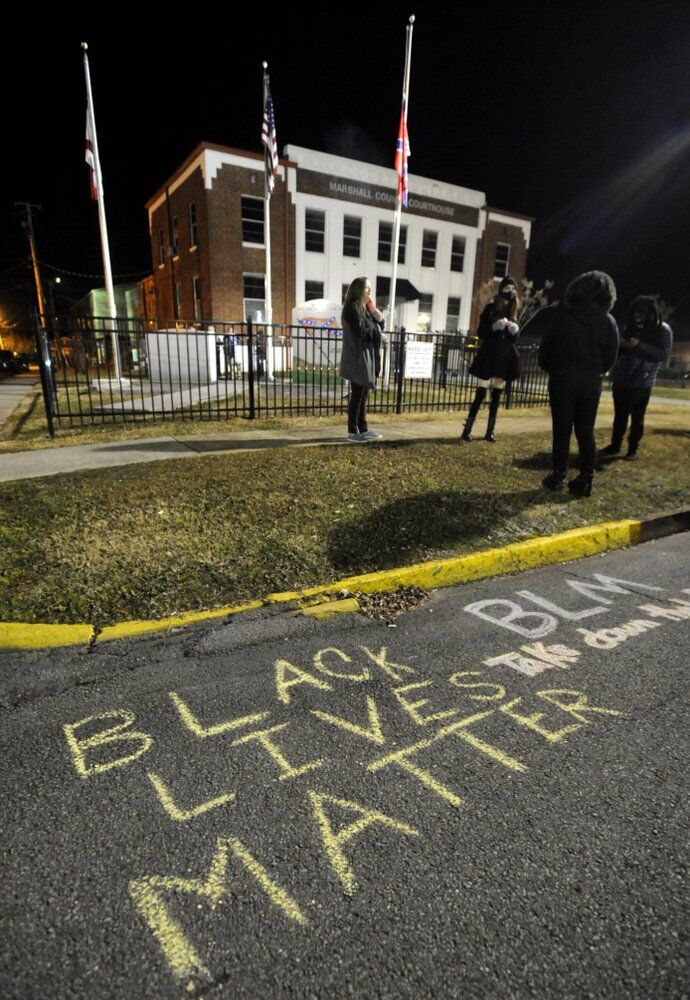 During her final year at Albertville High School in 2015, teachers gave Unique Morgan Dunston a citizenship award and fellow seniors voted her the class clown. Today, she’s the target of death threats and jeers on Main Street.

The change is because of what Dunston does now, not who she was years ago. A Black woman transformed by leaving a virtually all-white Alabama hometown where new ideas about race and justice run up against Old South traditions, Dunston has led regular protests since August against a Confederate monument on the courthouse lawn.

Dunston and a small band of compatriots regularly chant anti-racist slogans, hold signs and use chalk to mark up the street with unrelenting demands to take down the monument, which has an image of a rebel soldier holding a Confederate battle flag. It was installed on public property by the Sons of Confederate Veterans more than two decades ago with the county’s permission.

“My hope and my desire is that as we continue, more people from the community will start coming out, that they will realize that this wasn’t a phase, that, ‘They are serious and they need our help,’” she said. “Because we do.”

The movement has some support: A retired county judge wrote a public letter endorsing the removal of the monument, and groups including the Council on American-Islamic Relations have sided with Dunston. More than 3,300 people have signed an online petition supporting the cause.

Yet, like a biblical prophet unwelcome in her own home, Dunston has become a lightning rod for criticism by people who wish she’d just go away. Rather than removing the stone monument, the county has built a metal fence around it and passed a law to restrict demonstrations, some of which became shouting matches between Dunston’s group, Reclaiming Our Time, and Confederate sympathizers.

“Everybody’s getting tired,” said James Hutcheson, Marshall County Commission chairman, in an interview. “People want to move on with their lives and move past this.”

There’s no sign an end is near. Dunston said the protests will continue until the monument is gone and county officials haven’t made any move to remove it.

Located 80 miles northeast of Birmingham, Alabama, on Sand Mountain, a plateau near the Southern tip of the Appalachians, Albertville is a city of about 22,000 people in Marshall County, where the poultry industry and mid-sized manufacturing plants employ thousands.

Overwhelmingly white, the county’s population is about 15% Hispanic, many of whom work in poultry plants, and only 3% Black, census figures show.

Though her family has lived in the county for decades, Dunston said she was one of only two Black students in her graduating class of about 225 people. With so few Black people, Dunston said, there was little community awareness of African American culture or attitudes when she was growing up.

“February was just February,” she said. “No Black History Month.”

After graduating from Albertville High School with accolades, Dunston enrolled in college in the Gulf Coast city of Mobile, Alabama, with a population of about 190,000 people that’s slightly more than half Black. Suddenly, she was immersed in a city with a rich Black culture.

Aware of racial injustice like never before, Dunston came home from Mobile to help organize two “unity marches” in Marshall County in June after police in Minneapolis killed George Floyd in May. Hundreds attended each, and most of the participants were white since not many people of color live in the area.

Organizing through social media and word of mouth, Dunston decided to take on the Confederate monument. Hopeful after the two marches drew so many people, Dunston couldn’t help but notice the difference in turnout at the first demonstration in August.

“It probably went from 600 [at the marches] to, the first time we came out here, 15,” she said. Online threats that began during the marches became more frequent, and the public jeers began. Several white men screamed at Dunston or blew horns as they drove past a demonstration held outside the courthouse in early December.

Unlike places where protests began in the spring and died out by the time the weather turned cool, demonstrations have persisted in Albertville. The crowds aren’t huge, and sometimes there are as many or more people from Birmingham or nearby Huntsville as there are locals standing with Dunston, who commutes to and from Mobile for events.

Dunston’s father is usually around in the background, keeping watch over his daughter as a bodyguard, and mother Elizabeth Stewart is a participant. Counterprotesters are common, including an area Black man who supports the Confederate monument and rebel flag.

Stewart said she recalls attending movies in a racially segregated theater in the county as a girl, and she’s happy Dunston is speaking out now.

“I raised her to be just what her name says, Unique – the only one,” she said. “I am very proud of the message that God sparked in her heart to stand up.”