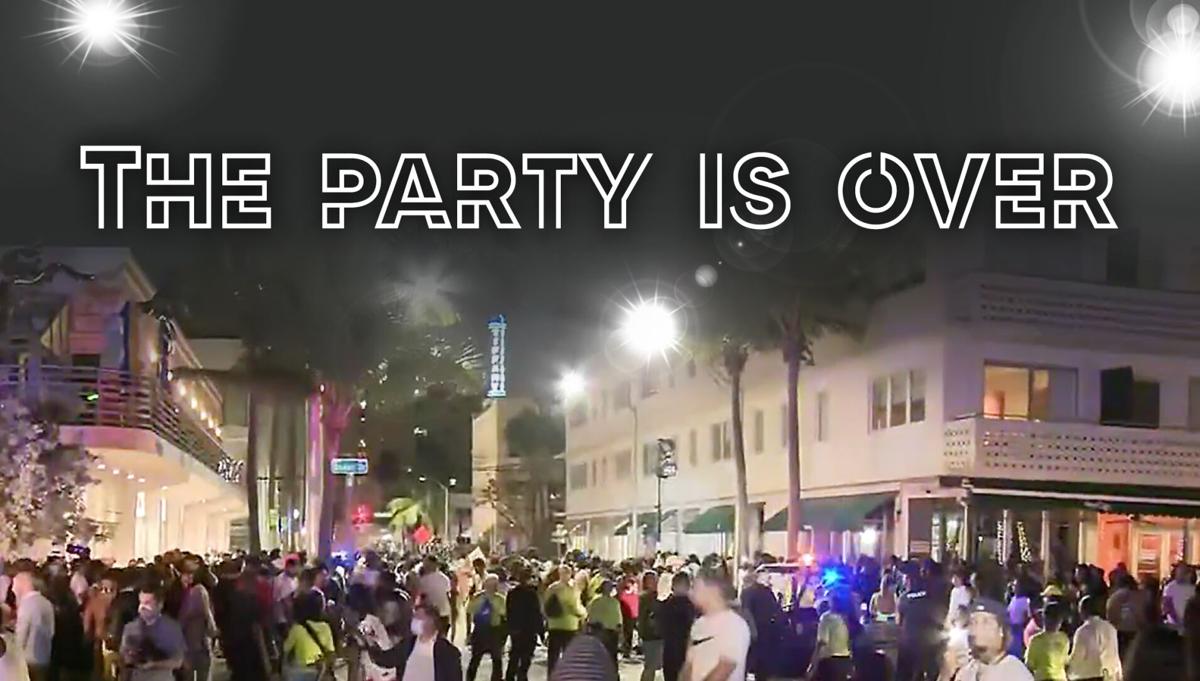 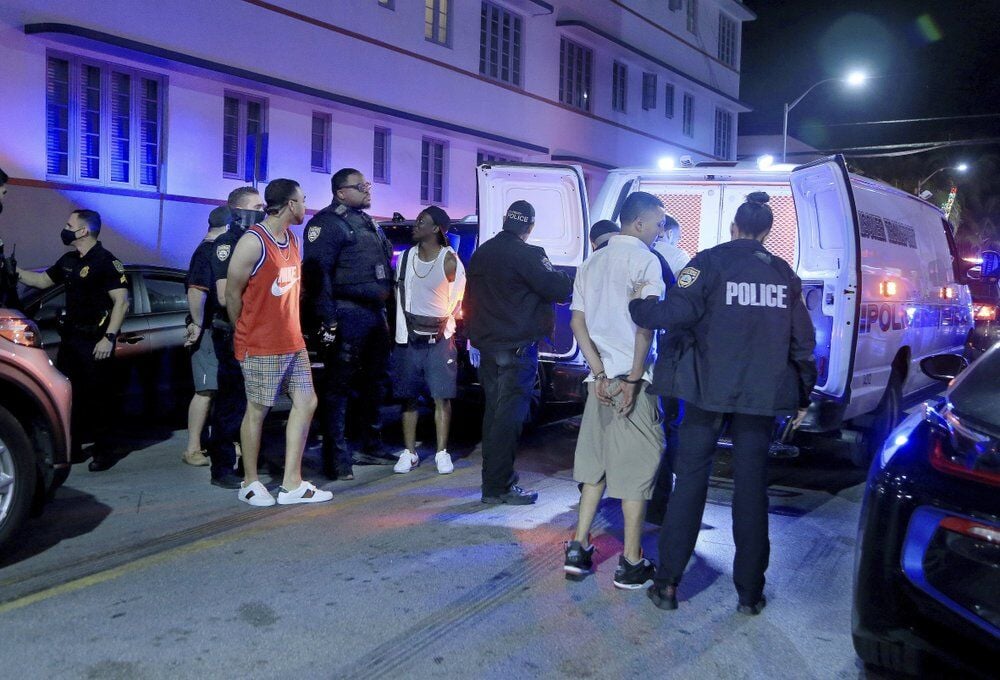 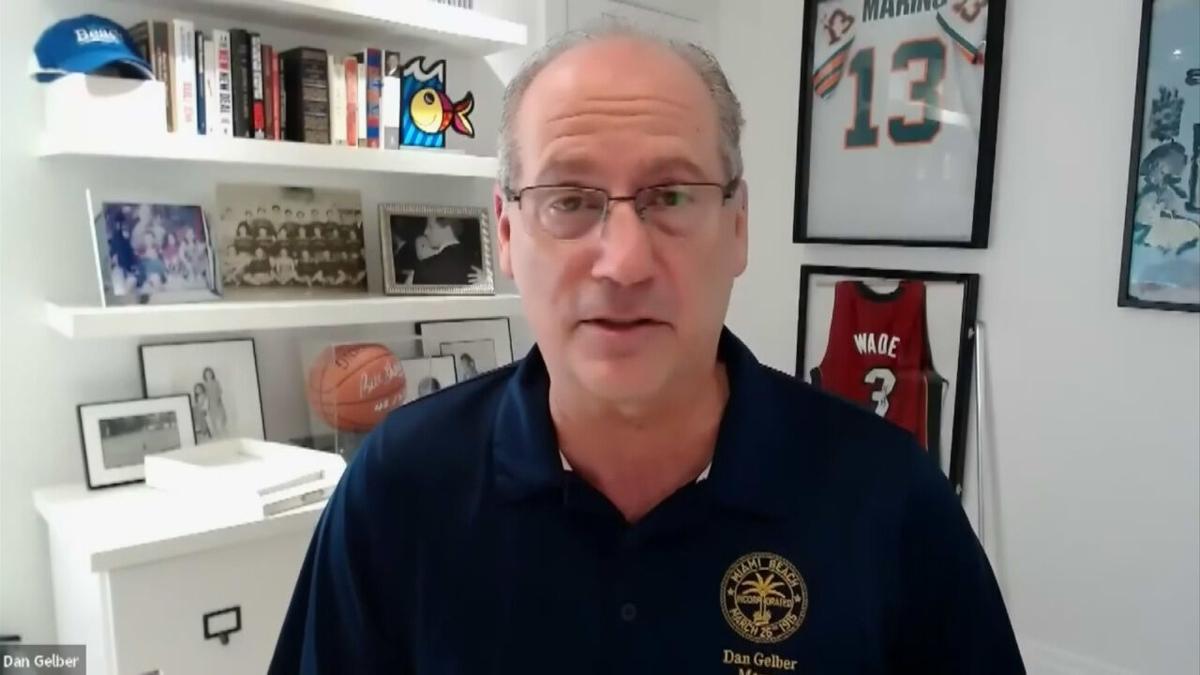 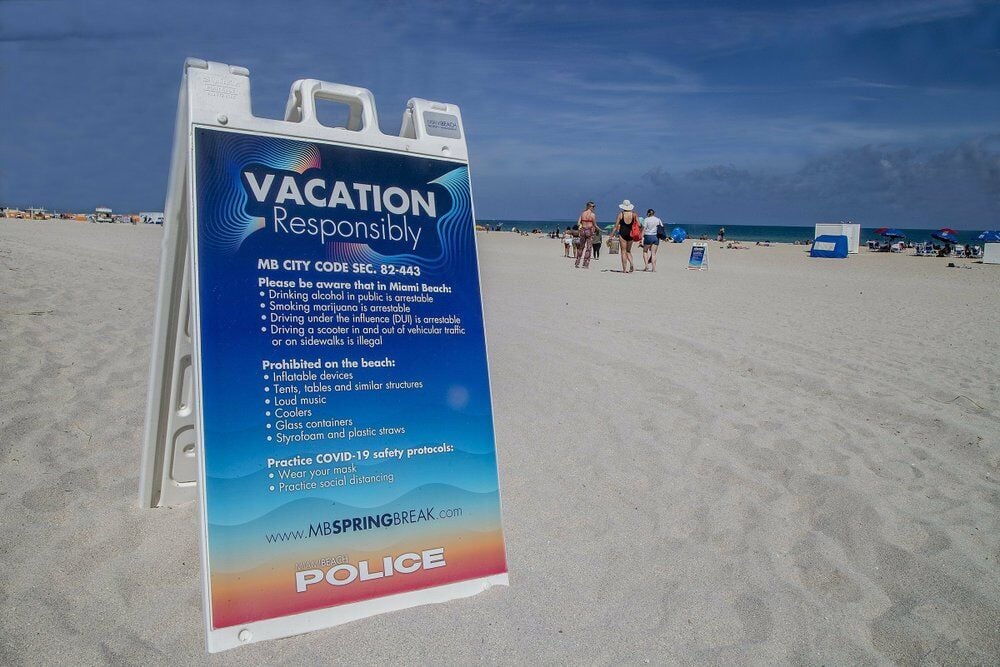 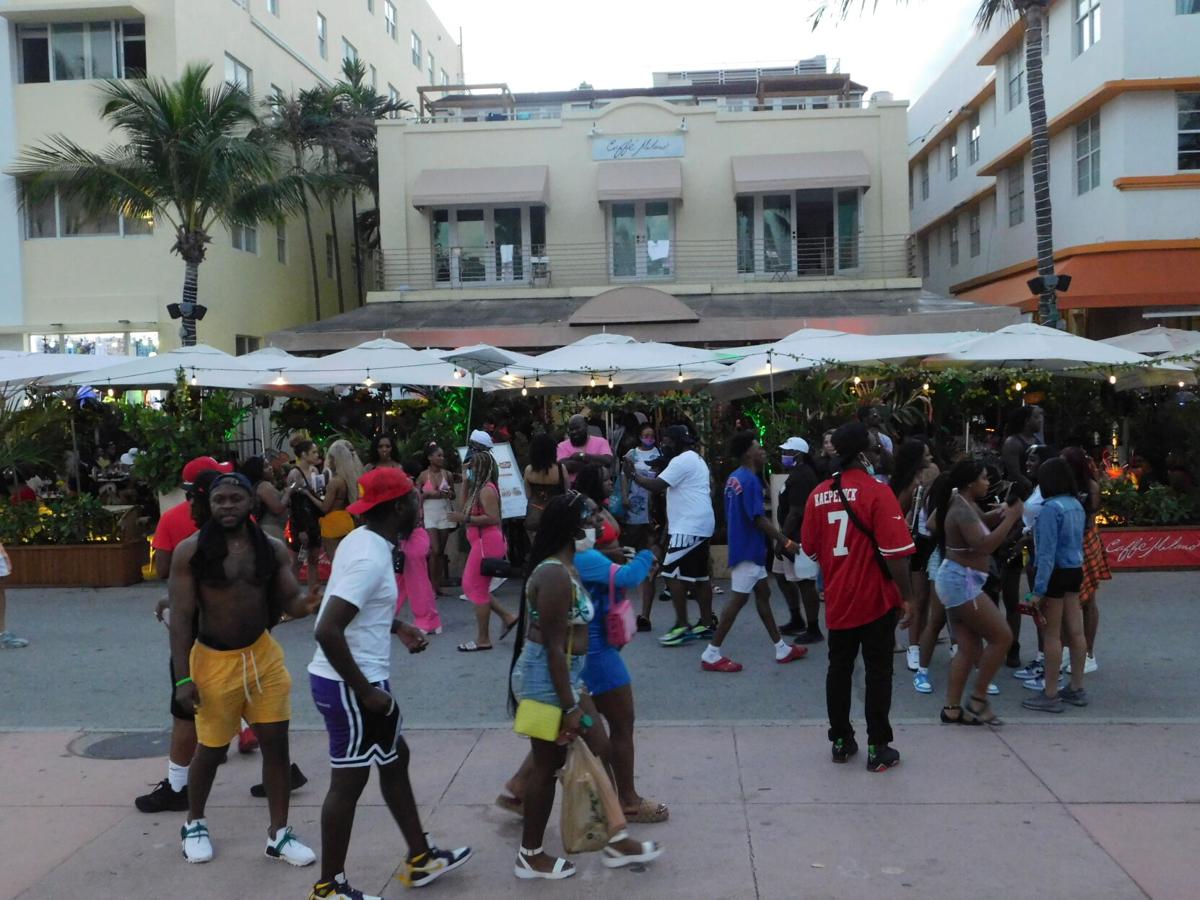 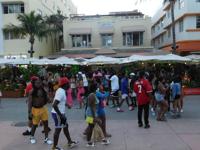 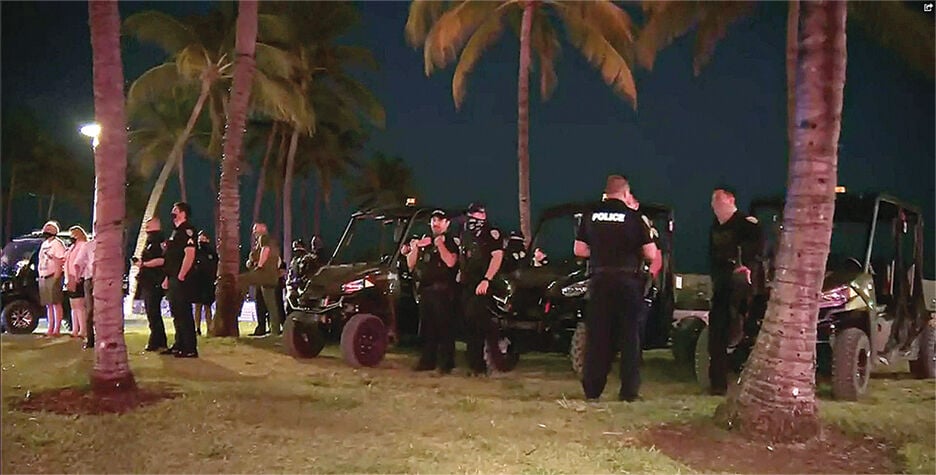 South Florida is again making national news for all the wrong reasons.

Pointing to more than 1,000 arrests in one of the country’s top party spots, Miami Beach commissioners voted Sunday to extend an emergency 8 p.m. curfew to April 12.

The curfew affects South Beach main drags Ocean Drive, Washington Avenue, Collins Avenue and Española Way from 5th to 16th streets, an area bound by Ocean Drive to the east and Pennsylvania Avenue to the west. Restaurants in the zone can remain open for deliveries until 6 a.m.

City officials had warned that unruly spring break crowds gathering by the thousands, fighting in the streets, destroying restaurant property and refusing to wear masks had become a serious threat to public safety. Then Monday police announced the arrest of Evoire Collier, 21, and Dorian Taylor, 24, of North Carolina who are being accused of drugging and raping a woman who later died in her hotel room. Miami-Dade medical examiners are performing an autopsy. The men also are accused of stealing the woman’s credit cards to spend money on South Beach.

While spring breakers are known for being unruly, drinking alcohol and sometimes trashing hotels, officials say these are not college students, but adults looking to let loose in one of the few states fully open during the pandemic.

Law enforcement officers from at least four other agencies, along with SWAT teams, were added to the effort to contain the raucous crowds, but it wasn’t enough. After days of partying, including several confrontations with police, Miami Beach officials on Saturday enacted a highly unorthodox 8 p.m. through 6 a.m. curfew, forcing restaurants to stop outdoor seating and encouraging local businesses to voluntarily shut down.

More than half of the more than 1,000 arrests were from out of state, said City Manager Raul Aguila, adding many are coming “to engage in lawlessness and an anything goes party attitude.” He also noted that the crowds weren’t eating at restaurants or patronizing businesses generating badly needed tourism dollars, but merely congregating by the thousands in the street. Police also seized about 80 firearms, and five officers have sustained injuries.

Officers in bulletproof vests dispersed pepper spray balls Saturday night into a defiant, but mostly nonviolent crowd, causing a stampede. Police say they were forced to act when people ignored the curfew.

Glendon Hall, chairman of Miami Beach’s newly formed Black Affairs Advisory Committee, told the Miami Herald it was the Coral Gables SWAT truck that “hyped things up” and amplified tensions when everyone was peaceful. He was on Ocean Drive at the time helping “goodwill ambassadors” guide crowds off the street, but had to duck behind a tree when pepper balls being shot from the truck caused panic. Miami Beach Chief of Police Richard Clements said the incident would be "reviewed internally."

Tourists were urged to stay inside their hotels and pedestrians and vehicles were banned from entering the restricted area after 8 p.m.

Clements said he initially became concerned last Monday, when crowds seemed larger than normal on what is typically a quieter day. By Thursday, large groups of people were gathering en masse and fights were breaking out, causing people to flee for safety.

“We couldn’t go on any longer,” Clements said Sunday.

By Friday night, police said the partying was out of control. One restaurant was “turned upside down” in the melee, “chairs were used as weapons” and broken glass covered the floor.

Next door, iconic bar the Clevelander South Beach announced it was temporarily suspending all food and beverage operations until at least March 24, after crowds crammed Ocean Drive, breaking out into street fights.

After gunshots were fired, a young woman cut her leg so badly in a chaotic race to escape that she was transported to the hospital where they initially thought she had been shot, police said.

“When hundreds of people are running through the streets panicked, you realize that’s not something that a police force can control,” he said during a commission meeting Sunday.

Local officials have struggled to enforce COVID-19 ordinances. Florida has no statewide mask rules, limits on capacity or other such restrictions, courtesy of Republican Gov. Ron DeSantis’ pro-business stance.

Commissioners said it's time to rebrand South Beach, pointing to the much quieter spring break in Fort Lauderdale. But that city has been actively clamping down on spring break tourism since 1986. That year, then Daytona Beach Mayor Larry Kelly went on national television with former Fort Lauderdale Mayor Bob Cox and said his city would take every student Cox cast out. Fort Lauderdale told students they weren't welcome. Now Kelly is leading an effort end it all.

"I figured we could handle it," he told the Sun-Sentinel. "It was a mistake. We're fed up with it."

Just like South Beach, Daytona Beach at one time experienced thousands of rowdy crowds, public drunkenness, all-night partying, loud music, traffic jams and trash covering the streets. Nearly 2,000 arrests were made during spring break in 1993. For the first time, many hotel operators said they had enough. The Motel Hotel Association of the Daytona Beach Resort Area voted decisively at that time to ask city and tourism officials to cancel their support for Spring Break.

But some Black leaders in Miami are accusing officials of overreacting, and say city officials are conjuring up fear out of deeply rooted racism.

DeAnne Connolly Graham, another member of Miami Beach’s Black Affairs Advisory Committee, has suggested in published reports that city leaders should consider funding cultural programs in the future to give spring break visitors something to do besides drink in the streets.

Miami Beach City Commissioner Ricky Arriola, who has spoken out against the curfew, said the city shouldn’t tolerate violent crowds but added he agrees that the administration should embrace Black tourists by setting up food festivals and concerts to make visitors feel welcome.

The city, which attempted to set up a spring break event last year, scrapped plans to do something similar this year because of concerns about attracting large crowds during a pandemic. The commission still voted this year, however, to subsidize the South Beach Wine & Food Festival in May.

Gelber is adamant that conduct – not race – is behind his opposition to hosting spring breakers. Further, he is against spring break programming in a city that is “severely and sometimes chaotically overcrowded.”

Ruban Roberts, immediate past president of the Miami-Dade NAACP says he believes the city’s actions are motivated primarily by the age of the partiers rather than their race.

“They are very welcoming to Jeff Friday and the [American Black Film Festival], which attracts a majority black crowd. They’re welcoming to that.... it’s these young people they have issue with, the way they party and dress and behave,” Roberts explained.

As of now, alcohol is banned from the beach, along with all alcohol sales after 10 p.m. in an effort to curb partying. The city even sent cellphone text messages to tourists warning, “Vacation Responsibly or Be Arrested.” Similar warning signs are all over the beach.

“I just feel like it’s really not fair,” tourist Heather Price told NBC 6. “People paid a lot of money to come all the way out here, just to not be able to do the activities they wanted to.”

A 10 p.m. shutdown of the eastbound lanes of the MacArthur, Julia Tuttle and Venetian causeways will remain in effect Thursday through Sunday for the remainder of spring break.

Residents, hotel guests and local business employees are exempt from causeway closures on the MacArthur and Tuttle. The Venetian is resident-only during the causeway shutdown hours.

This story includes revisions made to the original posted on March 24, 2001