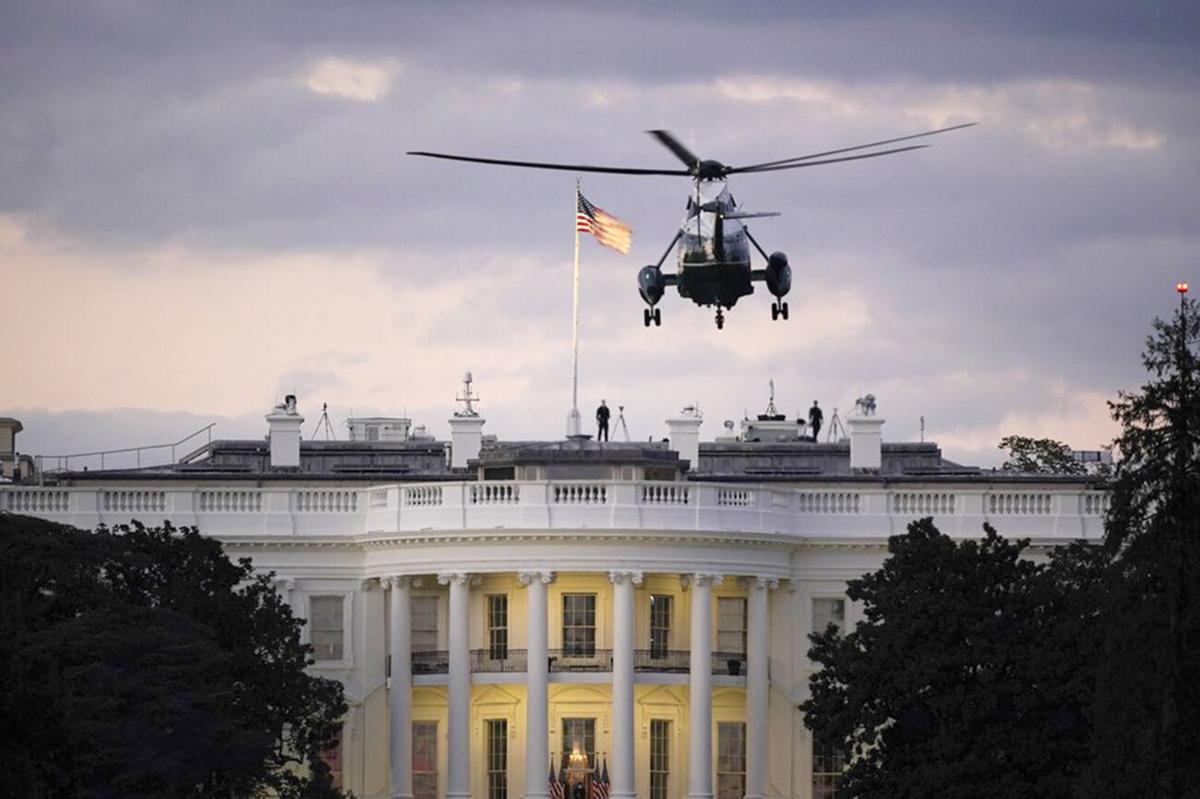 President Donald Trump arrived back at the White House aboard Marine One, Monday evening, Oct. 5, after being treated for COVID-19 at Walter Reed National Military Medical Center. 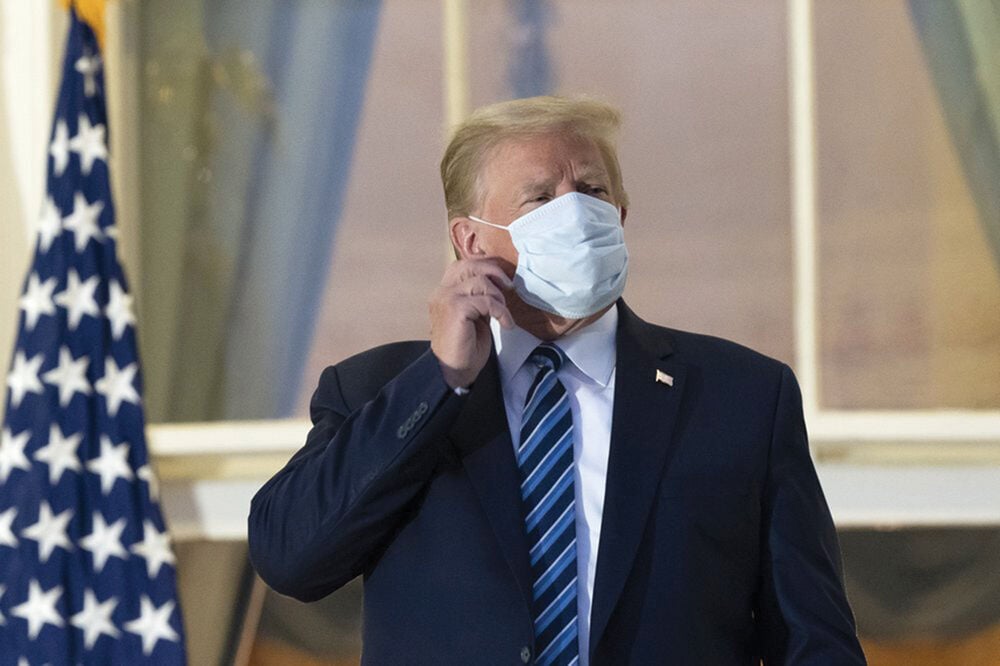 Trump removed his mask as he stood on the Blue Room Balcony upon returning to the White House on Monday.

The West Wing is a ghost town. Staff members are scared of exposure. And the White House is now a treatment ward for not one – but two – COVID patients, including a president who has long taken the threat of the virus lightly.

President Donald Trump’s decision to return home from a military hospital despite his continued illness is putting new focus on the people around him who could be further exposed if he doesn’t abide by strict isolation protocols.

Throughout the pandemic, White House custodians, ushers, kitchen staff and members of the U.S. Secret Service have continued to show up for work in what is now a coronavirus hot spot, with more than a dozen known cases this week alone.

Trump, still contagious, has made clear that he has little intention of abiding by best containment practices.

As he arrived back at the White House on Monday evening, the president defiantly removed his face mask and stopped to pose on a balcony within feet of a White House photographer. He was seen inside moments later, surrounded by numerous people as he taped a video message urging Americans not to fear a virus that has killed more than 210,000 in the U.S. and 1 million worldwide.

White House spokesman Judd Deere said the White House was “taking every precaution necessary” to protect not just the first family but “every staff member working on the complex” consistent with Centers for Disease Control and Prevention guidelines and best practices. He added that physical access to the president would be significantly limited and appropriate protective gear worn by those near him.

Nonetheless, the mood within the White House remains somber, with staff fearful they may have been exposed to the virus. As they confront a new reality – a worksite that once seemed like a bubble of safety and now is anything but – they also have been engaged in finger-pointing over conflicting reports released about the president’s health as well as a lack of information provided internally.

Many have learned about positive tests from media reports and several were exposed, without their knowledge, to people the White House already knew could be contagious.

Indeed, it took until late Sunday night, nearly three full days after Trump’s diagnosis, for the White House to send a staffwide note in response. Even then, it did not acknowledge the outbreak.

“As a reminder,” read the letter from the White House Management Office, “if you are experiencing any symptoms ... please stay home and do not come to work.” Staff who develop symptoms were advised to “go home immediately” and contact their doctors rather than the White House Medical Unit.

Even when Trump was at the hospital, his staff was not immune to risk.

Trump had aides there recording videos and taking photographs of him. On Sunday evening, he took a surprise drive around the hospital to wave to supporters from the window of an SUV. The Secret Service agents in the car with him were dressed in personal protective equipment.

“Appropriate precautions were taken in the execution of this movement to protect the president and all those supporting it, including PPE,” Deere said.

“How do they think he’s going to leave? Is someone gonna toss him the keys to a Buick and let him drive home by himself? They’re always around him because that’s their job,” Gidley said on Fox News.

Several who spoke with The Associated Press expressed concern over the cavalier attitude the White House has taken when it comes to masks and distancing. Colleagues, they said, are angry, but feel there’s little they can do.

One, speaking after White House press secretary Kayleigh McEnany tested positive on Monday, said it felt like he and some of his colleagues had been spared only by a measure of good luck.

Others noted the difference between facing outside threats they have trained for – a gun, a bomb or a biohazard – and being put at additional risk because of behavior they characterized as reckless at times. The agents spoke on condition of anonymity to avoid jeopardizing their jobs.

The Secret Service has refused to disclose how many of its employees have tested positive or have had to quarantine, citing privacy and security. But in the midst of the election, thousands of agents are on duty and anyone who tests positive can easily be subbed out, officials have said.

Secret Service spokeswoman Julia McMurray said the agency takes “every precaution to keep our protectees, employees and families, and the general public, safe and healthy.”

Trump has joined first lady Melania Trump, who also tested positive, in the residential area of the White House. It is typically served by a staff of roughly 100 people, including housekeepers, cooks, florists, groundskeepers and five or six butlers — who interact most closely with the president, said Kate Andersen Brower, who wrote the “The Residence: Inside the Private World of the White House.”

During the pandemic, that staff has been reduced to a skeleton crew, with mask-wearing much more prevalent than in the West Wing, where few have worn them regularly.

Brower said she recently spoke with three former employees who expressed concern about the health of current workers, but were too afraid to speak publicly.

“The butlers always feel protective of the first family, but there’s just a concern about whether or not the staff would get sick,” Brower said. Most are older, she said, “because they work from one generation to the next. They are people who have been on the job for 20 to 30 years. They want to work to get their full pensions.”

Many of the White House residence staffers are Black or Latino, among the demographic groups showing higher rates of infection and death in the pandemic. Overall deaths among minorities have risen far higher than among white people, data from the Centers for Disease Control and Prevention show. Among the risk factors, some communities of color are likely to have lower incomes, less often have insurance to help fight sickness, and have jobs that are deemed essential and expose them to higher risk of infection.

For months now, cleaning staff have also privately voiced concerns about their safety, including lack of access to testing and inadequate protective gear.

Stephanie Grisham, the first lady’s spokeswoman, said that “all precautions are being taken to ensure the health and safety of the residence staff,” but she declined to be specific.

While the White House has refused to implement new safety procedures –such as making masks mandatory – the building was noticeably emptier Monday, with more staffers now staying home on days when they are not needed on site.

It’s not the first time a White House has had to contend with a virus. During the flu pandemic of 1918, President Woodrow Wilson was infected as were members of his family and White House staff, including his secretary and several Secret Service members, according to the White House Historical Association.