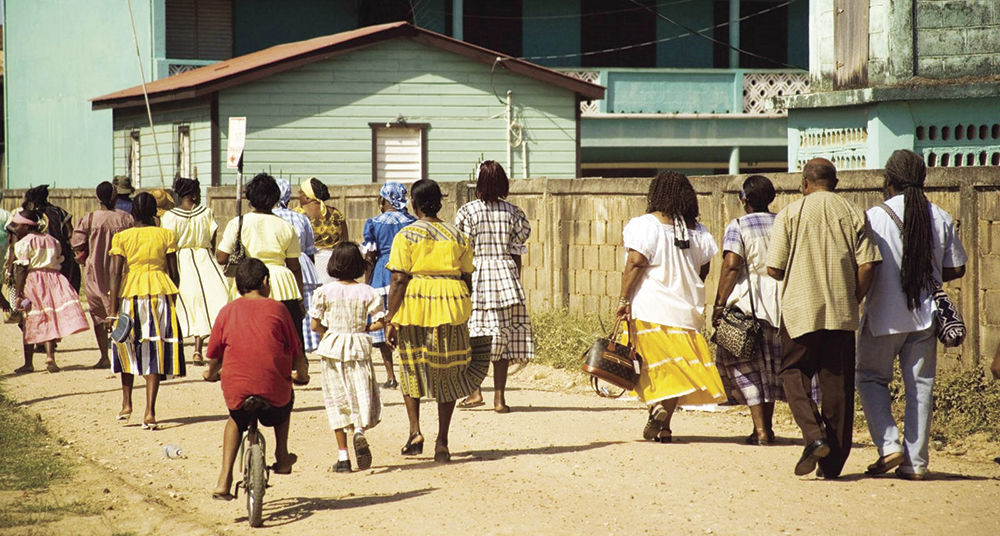 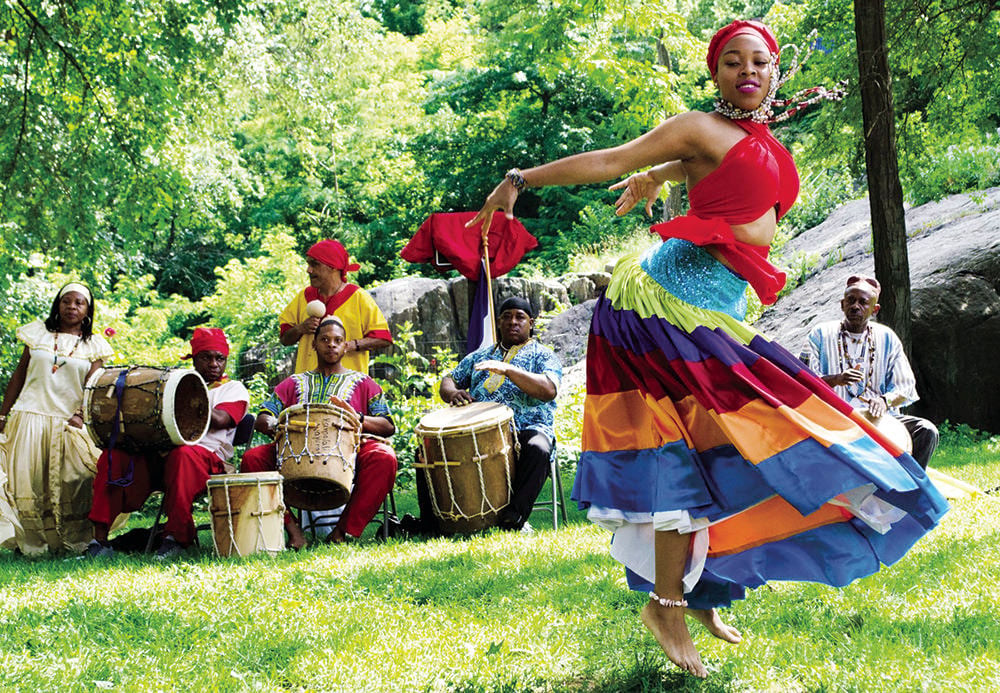 Gilberto Amaya's career in international development has taken him across more than 30 countries as he implemented renewable energy systems, agribusiness projects, and poverty alleviation initiatives. He witnessed post-independence struggles of sovereign states whose names are rarely heard on U.S. nightly newscasts – Burkina Faso, Togo, Zambia, Zimbabwe. A native of Honduras, he has memories of blending into and being welcomed by communities in Africa, Asia, Europe, and Central and South America.

Yet, near his home in Fairfax, Va., a bureaucracy momentarily stripped him of his identity. The incident sparked Amaya's quest to have Garifuna fully recognized by the U.S. Census Bureau.

"After conducting some public business at a government agency in Virginia," Amaya recalled, "I was leaving the line, and the Latina clerk heard me speaking Spanish to my wife and called me back to the counter."

For ethnicity, he had checked Black.

"You checked the wrong box," the clerk said. "You can't check Black. You speak Spanish. You have to check Hispanic.'"

Today, Amaya is a member of the Census Bureau's National Advisory Committee on Racial, Ethnic and Other Populations (NAC), designed to solicit recommendations on ways to improve the accuracy of the decennial count in determining ethnic minorities. He is allied with other Garifuna organizations, scholars and Afro-latino advocates to document their heritage and expand their visibility.

The Garifuna, descendants of Africans of mixed tribal ancestry, were captured and shipped from Africa to the Caribbean islands of St. Vincent and the Grenadines. Garifuna historians recount on-board insurrections that ran the ships aground. The captives escaped inland, intermarried with the indigenous Carib and Arawak Indians, also prey for forced-labor bondage. Sometimes referred to as the Black Caribs, the Garifuna led and participated in unsuccessful revolts, the Carib Wars, to overthrow British dominion, sometimes with assistance of France, England's imperial rival.

Though slavery had ceased in England by the late 1700s, the slave trade continued in the Americas. Given public outrage and the political strength of the abolition movement, the British demurred, in the Caribbean, from wholesale execution of prisoners deemed guilty of armed resistance. Though many Garifuna died after being captured and held in austere privation, others were transported 1,700 miles westward and abandoned to their fate.

"They put more than 2,000 people on ships and transported them across the Caribbean to the bay islands of Honduras," Amaya explains,

"and that's where the Garifuna people landed in mainland Central America. From their arrival on the coast, they eventually spread northwest to the rest of Honduras, Guatemala, Belize, and south to Nicaragua. Through migration, some large communities are here, like in the South Bronx, New York."

Amaya says New York's Garifuna population is America's largest, between 70,000 to 100,000, "but that is only an estimate because we don't really show up in decennial census data." Garifuna communities are also in Houston, Los Angeles, and elsewhere here and abroad in smaller concentrations.

The Garifuna are not entirely new arrivals in America.

"Migration is in our people's DNA," Amaya states. "The earliest Garifuna migration to the U. S. was after World War II, when they were recruited to work on the merchant marine ships supplying Europe during the war against the Axis powers. They weren't conscripted into the U.S. military, but many chose to remain in America after the war and never returned home. They sent for their families to join them in America."

Education was Amaya's path to the United States. He grew up on the Honduran coast, an outstanding student who became the first Garifuna to graduate with a degree in industrial-mechanical engineering from the National University of Honduras in the capital, Tegucigalpa. There he met and married Rachel, a Garifuna, also a student. They have six children.

"I went to work for the Honduras government for 10 years until I was offered an opportunity to work for a U.S. Agency for International Development contractor for projects in Latin America," he says. "Later, they decided I would be more useful to their work in Africa."

The contractor preferred Amaya be U.S.-based, so the family moved to Philadelphia. He earned his master's degree in international development from the University of Pennsylvania.

"Wherever you go – and I've been around, in all of Latin America, in Europe, and different places – and I've read about different places – it doesn't matter the type of regime, the left the right, a democracy an autocracy, a theocracy. Black people are always in the same position, at the bottom of the economic ladder.

"And, in my work, poverty alleviation, I have to look at those things and say, so why are we being sold the idea in Latin America that we're all the same, that we have the same rights, the same opportunities, yet we're always at the bottom? Nowhere is there anything close to a racial democracy. I came to the realization that it was a deliberate effort by the white Hispanic elite to keep the situation like that, and to inflate their [own] numbers."

Amaya contends the same dynamic has been at play in the U. S. Though Afro-Latinos contribute to the growth of the Hispanic population, their presence and needs have been marginalized by those whose outlooks and priorities are infused with the stigmas of the colonial past.

When Amaya got involved with census work, he recalls only those who identified as white in leadership positions or as spokespersons for national Hispanic organizations, and similarly in media and government, even during the Obama administration.

"We are promoting the inclusion of Afro-Latinos in census work," Amaya said. "I work to get the word out about the differences that exist on the census and the invisibility of the Afro-Latinos within the larger Hispanic population."

After wars of resistance against the British, the Garifuna were captured and forcibly shipped to Honduras. Amaya was born there in. An international development consultant who emigrated to the U. S. in 1989, he identifies himself as Garifuna, Black and Afro-Latino.

The Hispanic/Latino population's dramatic growth, captured in the U.S. censuses of 2000 and 2010, did not go unnoticed by America's political class. Amaya remembers the raw opportunism and frantic attempts of the Democratic and Republican parties to tap into what was perceived as a potential source of voters. Likewise, corporations, awakened to an emerging client base and potential consumer market, solicited Spanish-language speakers.

"I remember the lawyers all over the region where I live in Virginia running around, struggling with their broken Spanish to reach out to the Hispanic population because it [was] growing so fast."

According to the Census Bureau, Hispanics in the U.S. are nearing 60 million, more than 18 percent of the population. By 2050, this cohort is projected to rise to about 133 million people and will comprise one-third of American residents. Hispanics are "the nation's largest ethnic or racial minority," the Census Bureau reports, and 10 states already have at least one million Hispanic residents.

For many Americans, the terms Hispanic and Latino are interchangeable, but for purposes of the census, Hispanic refers primarily to descendants of forebears from Mexico or other governments once under Spanish rule. Latino describes the populations of Central and South America, or Latin America, but includes Brazil, colonized by the Portuguese.

How the descendants of the millions of Africans imported into this once New World defined themselves is rarely addressed. In some countries, Amaya explained, those who owned slaves included them in census responses as an indicator of wealth. After independence, he said, "governments sought to present a whiter face to the world in order to attract European immigrants." The hierarchical color codes denoting mixed blood and status, with "Black" at the bottom, were maintained as a social construct, but discarded for purposes of the census.

With guidelines set by the Office of Management and Budget (OMB), the U.S. Census Bureau uses a linguistic panacea of sorts. Hispanics and Latinos are not a race, but rather an ethnic group that can be of any race. The bureau notes that, "in 2000 and in 2010, the Some Other Race population, which was intended to be a small residual category, was the third largest race group.

The 2020 census race categories will be the same as in 2010: white; Black or Afro-American; American Indian or Alaskan Native; and then as many as 11 boxes to denote Asian.

In order for Garifuna to be recognized in the 2020 census, Amaya will have to write Garifuna or Honduran on the form, under the Hispanic origin, and then also check the box for Black or African American. Presumably, he will be counted as both. Amaya estimates that, when adding the Afro-Latino population to the Black/African American one, their combined percentage of the U.S. total is probably closer to 20 percent.

Amaya's insistence on raising the visibility of the Afro-Latino presence in America elicits discomfort in some quarters. He said he's been accused of being divisive because he points out that the Hispanic/Latino community's diversity has been understated.

Amaya's letter to a Census Bureau director addressed "the concern increasingly voiced by millions in the Afro Latino community, a significant growing segment of the Hispanic population in the United States, which doesn't see itself recognized, equitably represented and sharing the benefits -- including representation in government, employment services, among others."

Locally, Amaya has been working with the District of Columbia's Complete Count Committee to ensure that Afro Latinos make themselves known in the 2020 census. During the Congressional Black Caucus Foundation's annual legislative conference in September, he was a key organizer of a panel, "The Decade of the Diaspora: A Conversation on the Afro Descendant Experience in Latin America," hosted by Rep. Hank Johnson, D-Ga. Actor Danny Glover was a speaker, as were several Garifuna activists. Though the topics centered on the challenges and conditions of Afro-Latino communities abroad, the question of identity resonated throughout the discussion.

In 2001, UNESCO recognized the Garifuna language, dance and music of Belize, neighboring Honduras. As a language, Garifuna is a mellifluous tongue comprised of African dialects, Carib, Arawak, and elements of French.

Amaya is fluent in Garifuna and cites sustaining language and culture as a Garifuna quest as well. He is heartened by individuals like Ruben Reyes, for example, who co-produced and starred in "Garifuna in Peril," a film about how modernity is affecting Garifuna communities. Amaya sees the census as a valuable tool to foster Afro-Latino and Garifuna prosperity.

"We have our challenges," he said of the struggle for unity, but he trusts that the Garifunas' "fierce resilience" will help chart their path.

Khalil Abdullah, a former executive director of the National Black Caucus of State Legislators, is a writer for Ethnic Media Services. He is also a former editor/writer for New America Media and former managing editor of the Washington Afro Newspaper.

Thank you! You've reported this item as a violation of our terms of use.

Error! There was a problem with reporting this article.

This content was contributed by a user of the site. If you believe this content may be in violation of the terms of use, you may report it.