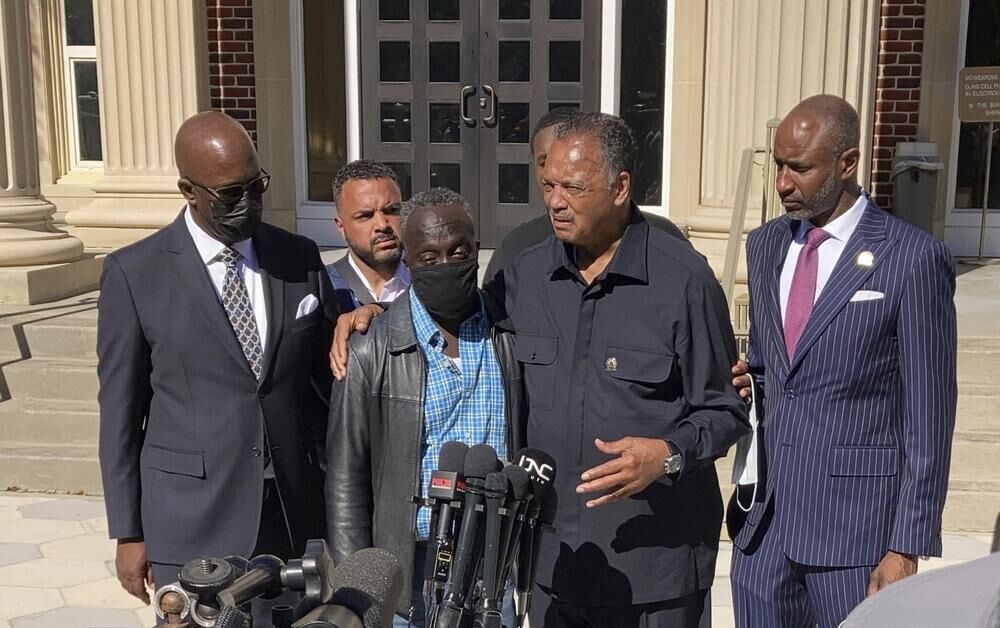 The Rev. Jesse Jackson (center right) puts his arm around Ahmaud Arbery's father, Marcus, in a news conference during a break in the trial of three men charged with killing Arbery taking place at the Glynn County courthouse in Brunswick, Ga. 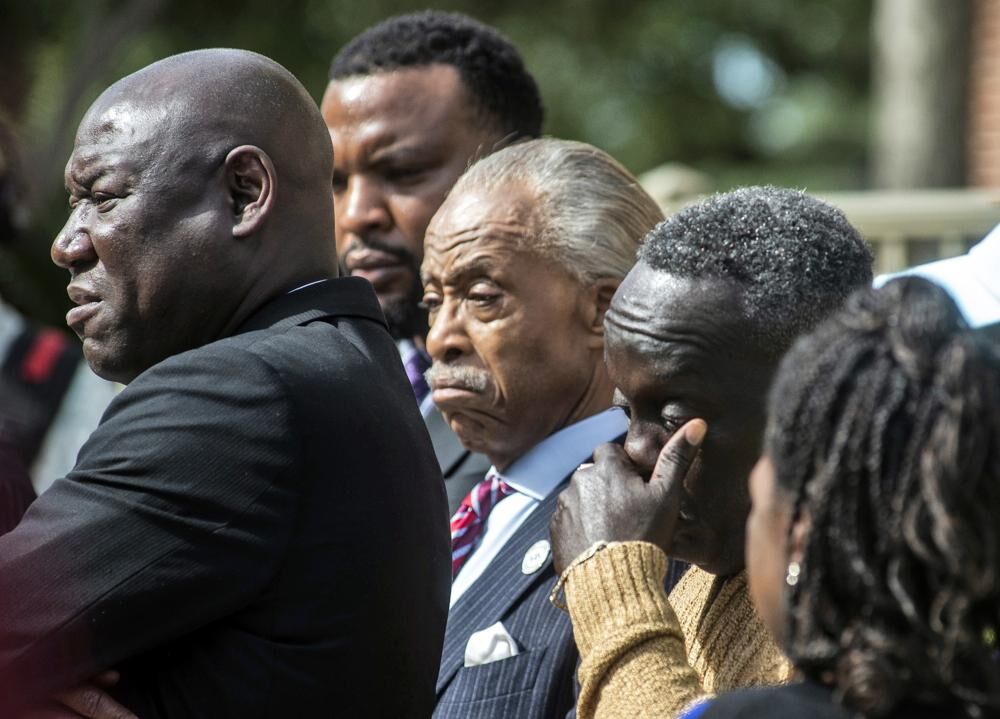 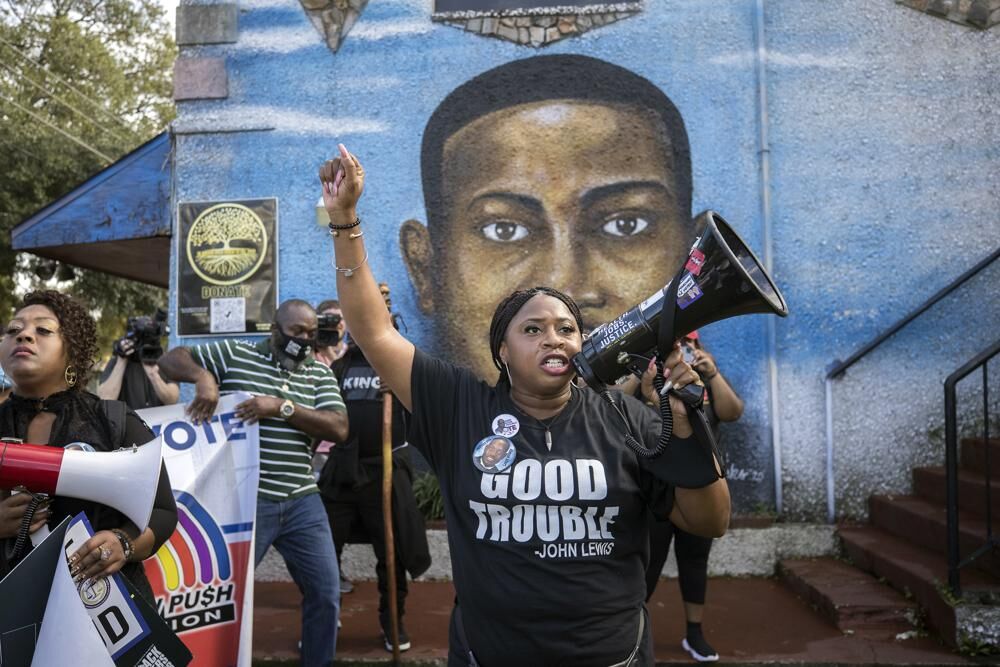 Civil rights activist Porchse Miller of Atlanta shouts into a megaphone in front of a mural of Ahmaud Arbery during march that followed the Wall of Prayer event outside the Glynn County Courthouse, Thursday, Nov. 18, 2021, in Brunswick, Ga. 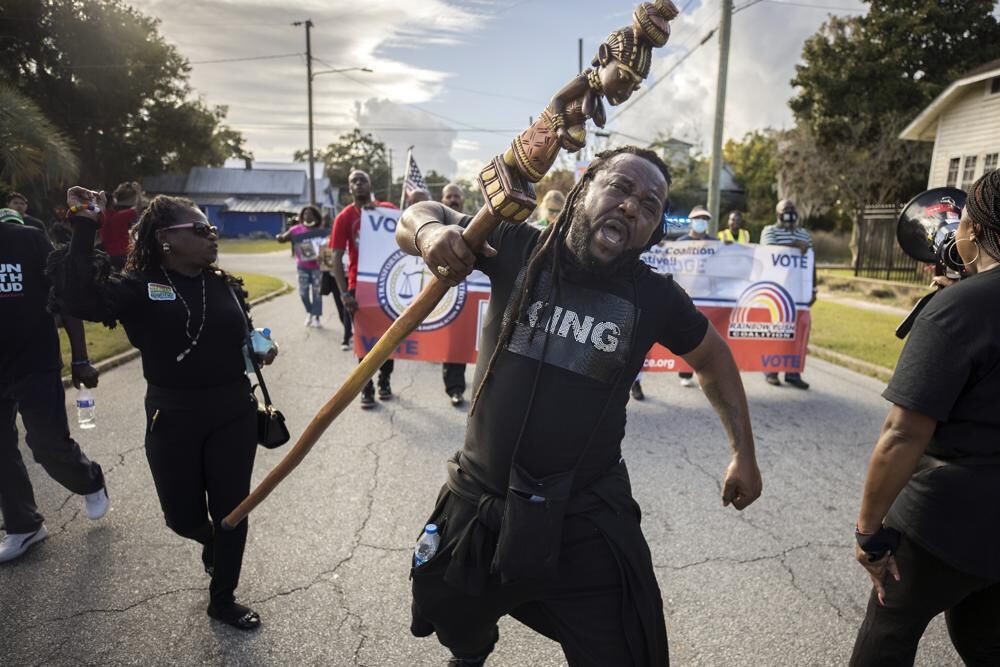 Protester Ray Montana of Augusta, Ga., chants during march that followed the Wall of Prayer event outside the Glynn County Courthouse, Thursday, Nov. 18, 2021, in Brunswick, Ga. The Rev. Al Sharpton organized the event after defense attorney Kevin Gough to objected to the presence of Black pastors in the courtroom.

Race was always going to be at the forefront of the trial of three white men charged with chasing and killing Ahmaud Arbery, 25-year-old Black man, in a coastal Georgia neighborhood.

But a defense attorney’s quickly rejected call to kick out Black pastors, including Jesse Jackson, from the Glynn County courtroom intensified frustrations and added fresh agony to a lingering wound that many in the community had hoped the trial could start healing.

About a mile from the courthouse in the majority Black city of Brunswick, Tony Bryant has been following the proceedings.

Sitting outside the front door of his apartment with peeling teal paint and a view of cranes at the state of Georgia’s port along the East River, he said the way race has seeped into the trial has been discouraging but not surprising – from seating an almost all-white jury when 27% of Glynn County’s 85,000 people are Black to trying to kick out Jackson and other pastors.

“Three white men killed a Black guy. Come on, man. Who did they think was going to be there to support his family?” Bryant said.

The request was especially offensive because pastors play an important role in comforting people who are hurting and demanding justice, said John Perry, a pastor and the former leader of Brunswick’s chapter of the NAACP.

“I believe we’re seeing overwhelming evidence that points us toward guilt, and so there’s been an attempt to take the focus off of the evidence,” Perry said.

After Jackson, the Rev. Al Sharpton and others sat with Arbery’s family in court, defense attorney Kevin Gough asked the judge to kick out the pastors, saying civil rights icons could influence the jury.

“We don’t want any more Black pastors coming in here ... sitting with the victim’s family, trying to influence the jurors in this case,” Gough said last week. The attorneys for the other two men on trial did not join Gough.

Sharpton said he started gathering dozens of Black pastors to pray outside the courthouse Thursday with lawyers representing Arbery’s family.

“They tried to ban one. We’re coming back with a hundred,” Sharpton said.

Not long afterward, they did. On Thursday, Nov. 18, hundreds of pastors both rallied and prayed outside the trial as testimony resumed. It was a sea of dark suits and white collars.

Other demonstrators who came carried signs reading, “Black pastors matter,” and some wore buttons with Arbery’s picture and the hashtag they were using for the case, “#JusticeForAhmaud.” A vendor sold T-shirts under one tent while a woman under another offered water and snacks and asked people to put donations in a pickle jar.

Superior Court Judge Timothy Walmsley called the request against the Black pastors “reprehensible” because in America, trials and courtrooms are open for all outside of pandemic concerns, and the pastors had followed those rules.

That opinion was echoed throughout Brunswick, from groups of white and Black pastors gathering outside the courthouse each day to shop owners a few blocks away, where a glance to the left sees dozens of expensive boats docked.

Melissa Bagby winced when a reporter asked her about the attorney’s request.

“That was disgusting,” she said behind the counter of The Market, a store full of knickknacks, whimsical signs and a cat named Sasha who leads customers to her food bowl.

Arbery “wasn’t armed and wasn’t doing anything wrong,” Bagby said. “I think they’re trying to do whatever they can.”

The city of 15,000, which is the gateway to idyllic spots along the coast and surrounded by a county where a significant majority of people are white, has talked and prayed its way through the anger after the men weren’t charged for more than two months – and only after a video of them chasing Arbery in pickup trucks was released and state investigators took over.

In Brunswick, white and Black people make a point “to sit at the dinner table and drink tea and lemonade and eat chicken and biscuits” while sharing their thoughts and experiences, said the Rev. Abra Lattany-Reed, a Black pastor who has lived in Brunswick all her 60 years.

But each new point of racial division from the trial hurts her goal of bringing Black and white people together to solve other, more persistent problems.

“It sets us back because it takes us away from conversations that were already going on,” said Lattany-Reed, who pastors Harper’s Chapel United Methodist Church. “It’s taken our attention away from education and economic justice and stimulating the economy for the common good.”

With the trial winding down, Brunswick is preparing for a possible verdict.

“If it comes back not guilty, I would leave town for at least three days. Not guilty would open the flood gates,” said Perry, the local civil rights leader.

None of the businesses near the courthouse, accustomed to taping up or boarding windows when hurricanes threaten, have taken precautions.

Danielle Brazell and other business owners worried last year when a protest outside the office of a local prosecutor who initially chose not to charge the men attracted national attention.

“I felt better after that,” said Brazell, who owns the Rose & Vine gift shop. “I think they will be found guilty. They deserve it for what they did. But if they aren’t, I think people will understand it isn’t the community’s fault.”

Before testimony in the trial started, outgoing Brunswick Mayor Cornell Harvey, who is Black, and Glynn County Commission Chairman Wayne Neal, who is white, spoke in a video with a number of other people in the community urging unity and togetherness.

“I’m praying that this doesn’t become a racial divide,” Harvey said Tuesday. “We have a chance to show the world that we know how to keep the peace in a peaceful town.”