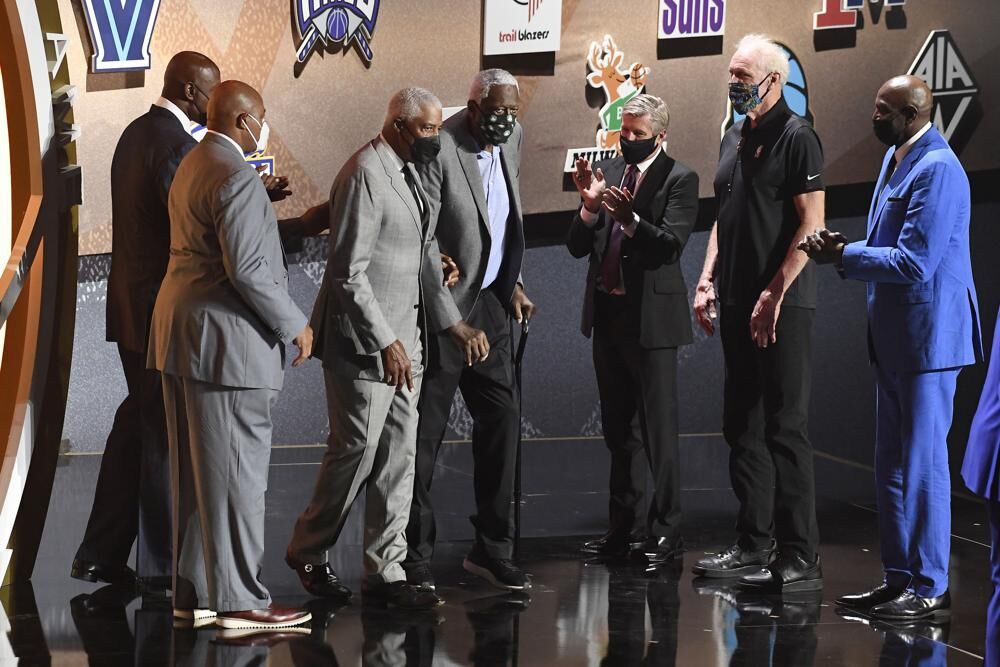 Inductee Bill Russell is escorted on stage by Julius Erving during the 2021 Basketball Hall of Fame Enshrinement ceremony. He was initially inducted as a player in 1975 and was honored this time around for his coaching career. 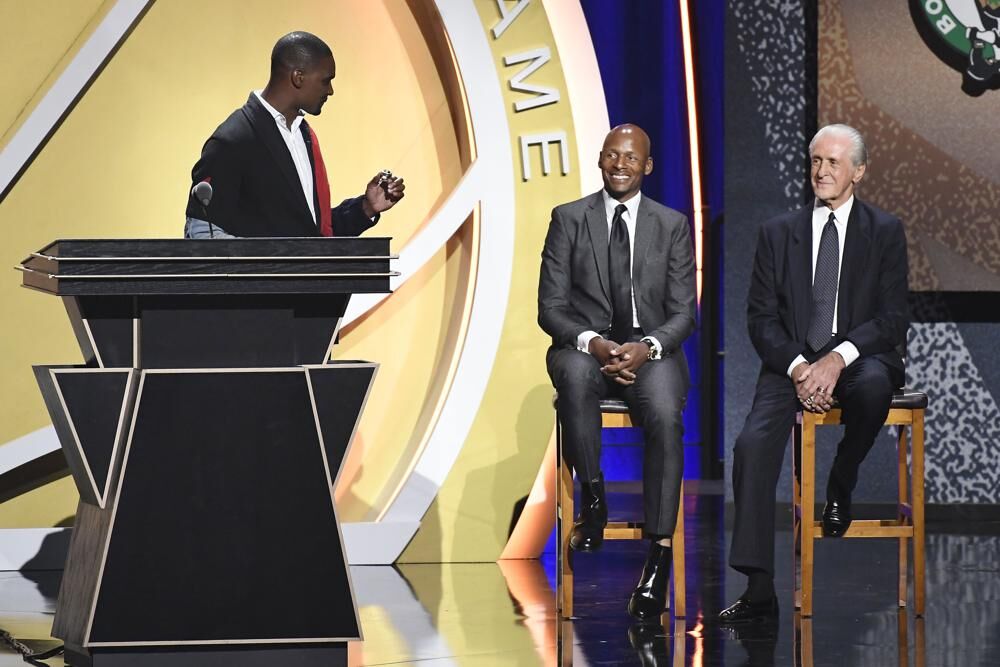 Inductee Chris Bosh returns the NBA Championship ring given to him by Pat Riley as an incentive for them to win a ring together. 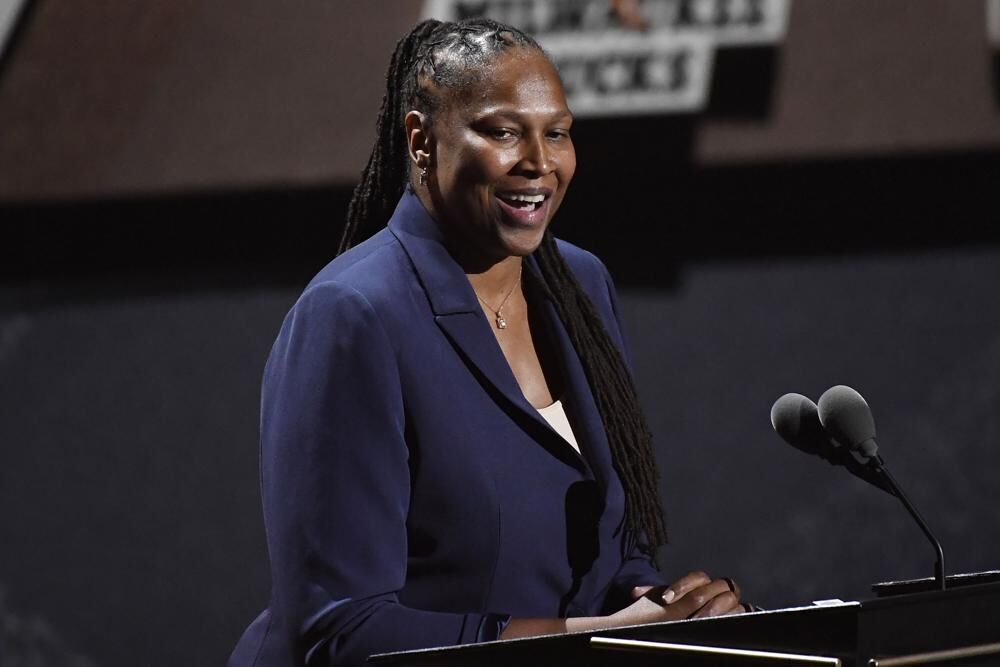 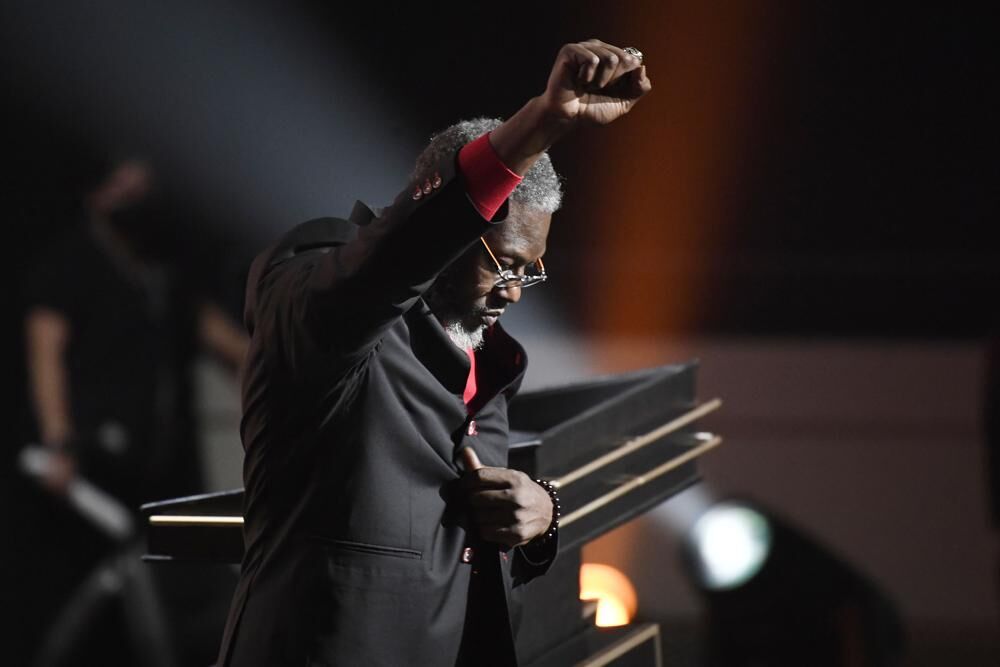 Inductee Ben Wallace pumps his fist into the air during the 2021 Basketball Hall of Fame Enshrinement ceremony Sept. 11, 2021.

Four months after the pandemic-delayed induction of the Class of 2020 into the Basketball Hall of Fame, including Kobe Bryant, the Hall community gathered to enshrine 16 more new members – its biggest class ever. Many in the crowd wore masks; three-time WNBA MVP Lauren Jackson wasn’t able to attend because she was back in Australia in lockdown.

Bill Russell, who was inducted as a player in 1975, was honored for his coaching career; he is the fifth person to be inducted as both a player and a coach. But to former President Barack Obama, his greatest role was what he accomplished off the court during the civil rights movement of the 1960s.

Russell, 87, was honored as the first Black coach in NBA history. Taking over the Celtics from Red Auerbach in 1966 and staying on as a player-coach for two more years, Russell guided Boston to NBA titles in 1968 and ’69.

Russell was present and wearing a Celtics mask at the ceremony, but his speech was presented as a prerecorded video.

Bosh discussed his arrival in Miami, when Heat executive Pat Riley offered him one of his NBA championship rings and said it could be returned when they won one together; they won two, and Bosh finally returned the bauble on Saturday night.

He discussed his departure from the game, at the age of 31, when he was forced to retire because of blood clots.

“After finally making it to the mountaintop with so much more to do, in my mind, so much more work to do, it all stopped,” he said. “I eventually came to realize that we all have it in our power to make the most out of every day despite what happens, to turn setbacks into strengths.”

Inductee Val Ackerman was the inaugural president of the WNBA, the first female president of USA Basketball and has been the commissioner of the Big East since 2013. With few female role models to look up to in the business of sports, she found one elsewhere.

“I’m inspired to this day by the example set by Billie Jean King,” Ackerman said, “and the many strong women and men who followed her in the quest to make the chance to play sports, and to do it on a big stage, a reality for girls and women in our country and our world.”

Croatia and Chicago Bulls star Toni Kukoc chose Michael Jordan and Bulls owner Jerry Reinsdorf as presenters for his induction, and alluded to the tension over his arrival in Chicago that was laid bare in the documentary “The Last Dance.”

“I would like to thank this gentleman here, Michael Jordan, and Scottie Pippen, for kicking my butt during the Olympics in Barcelona, and that way motivating me to work even harder to become an important part of the Chicago Bulls,” he said.

Pistons star and inductee Ben Wallace was emotional and poetic in describing his upbringing as an undersized big man who carved out a role on defense, winning defensive player of the year four times.

“Basketball was not my life. Basketball was just in my life. I took basketball and I created a path for those who helped me,” he said. “I took. I received. I gave back. I laid a path. I laid a track. It should be easy to find, I was stuck in it for quite some time.”

He walked off the stage with a raised fist.