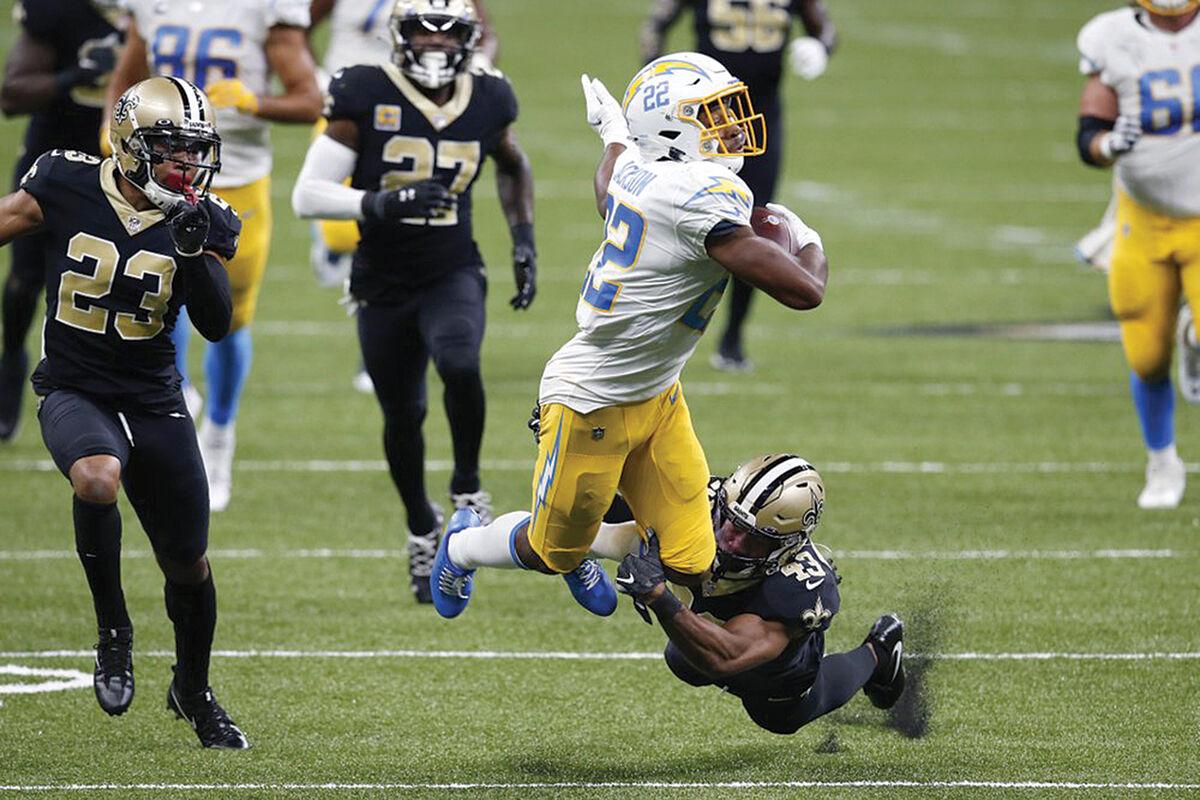 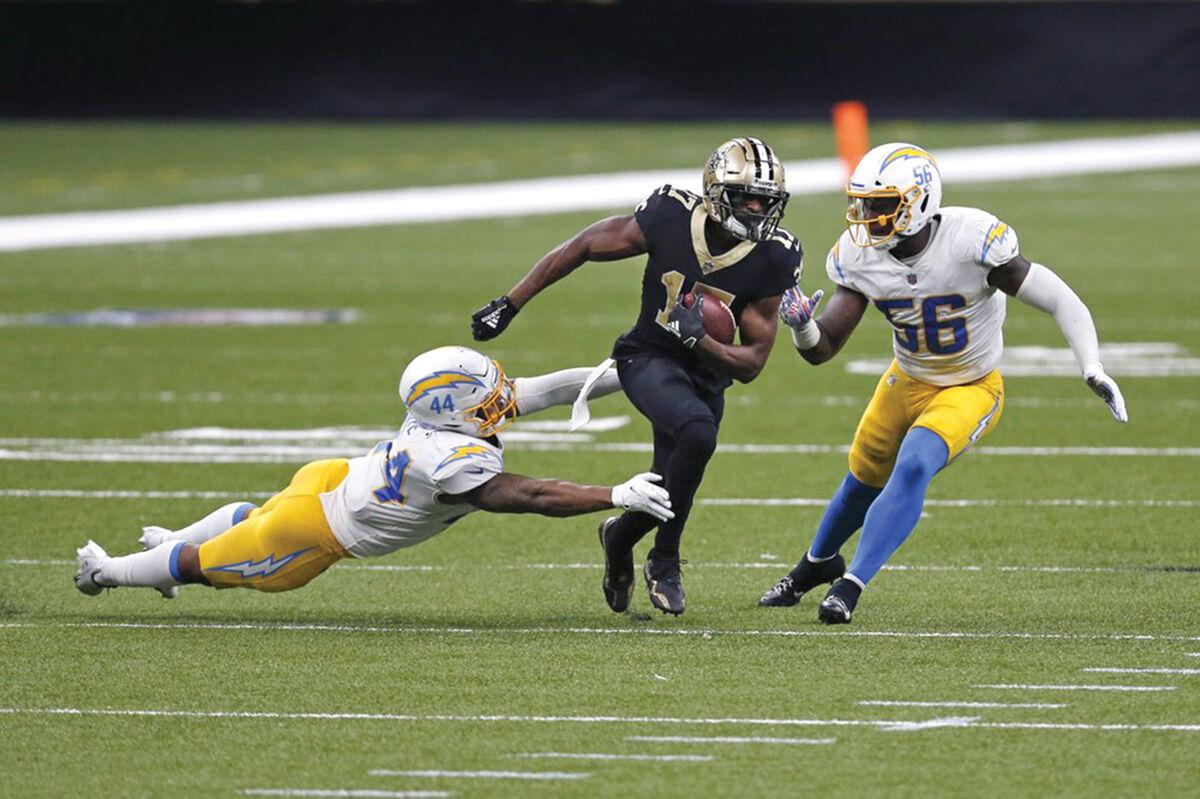 Drew Brees keeps coming through in the clutch in his 20th season, while the Los Angeles Chargers keep squandering the heady play of promising rookie quarterback Justin Herbert.

The 41-year-old Brees became the oldest quarterback with more than 32 completions in an NFL game, Wil Lutz kicked a 36-yard field goal in overtime and New Orleans’ defense stopped receiver Mike Williams just short on fourth down to preserve a 30-27 victory over the seemingly star-crossed Chargers on Monday night.

“This is how you grow as a team. This is how you become battle-tested – and I think it pays dividends as you move along,” said Brees, who rushed for a 1-yard touchdown and hit tight end Jared Cook for a 41-yard score as the Saints rallied from a 17-point, second-quarter deficit.

“These are the tests that really bring a team together and give you confidence and give you momentum and really shape you,” Brees continued. “We know if we can put ourselves in position to win, then we can do that.”

Figuring that out is proving to be a painful process for the Chargers (1-4), who fell to their fourth straight loss by a touchdown or less, and the second in overtime. They also blew a 17-point lead for a second straight game.

“Never thought this team would lose four straight. We’ve put ourselves in position, but we didn’t get it done,” Chargers coach Anthony Lynn said. “We have to finish these damn games.”

Chargers kicker Michael Badgley, who missed his first career point-after kick wide right in the first quarter, had a chance to redeem himself after Williams’ leaping catch between two defenders put the Chargers on the Saints’ 32-yard line in the final seconds. But Badgley’s 50-yard kick as time expired bounced off the right upright.

“The young man has been kicking outstanding. He’s got to do better but we could have done some other things better,” Lynn said.

Herbert’s fourth touchdown pass of the game, a 64-yarder to Williams, briefly put Los Angeles back in front before the Saints (3-2) tied it on Taysom Hill’s 9-yard run with 52 seconds left in regulation.

Herbert, who was named the starter for the remainder of the season this week, finished 20 of 34 for 264 yards without an turnover. Five of his completions went to Williams for 109 yards and two TDs.

“It’s a learning process,” Herbert said. “Losing is horrible, but we are going to turn it around.”

Brees finished 33 of 47 for 325 yards, including 12 completions to Emmanuel Sanders for 122 yards. Alvin Kamara had 119 yards from scrimmage, highlighted by his leaping, juggling catch along the right sideline over the head of safety Rayshawn Jenkins to set up Hill’s tying TD.

The Chargers became the first team to lose 17-point leads in consecutive weeks since the 2003 Atlanta Falcons. For the Chargers, both have come on the road against an NFC South team led by a quarterback older than 40.

In Week 4, it was Tampa Bay’s Tom Brady, a six-time Super Bowl winner. This week it was the NFL’s all-time leader in completions, yards and touchdowns.

Brees’ dive over a pile of linemen at the goal line made it 20-10 14 seconds before halftime.

Lutz, who hit from 48 yards in the first half, drilled a 53-yarder that pulled New Orleans within a touchdown in the third quarter. Then Brees found Cook open behind the Chargers’ secondary on third-and-long to tie it early in the fourth quarter.

In staking Los Angeles to an early 20-3 lead, Herbert became the first rookie to pass for three TDs in the first half of a Monday night game.

His first came when he rolled right away from pressure and fired a 17-yard pass down the sideline to Allen.

Herbert’s 49-yard completion to Jalen Guyton set up his 4-yard scoring strike to Williams one play later. The touchdown capped a drive extended by a roughing-the-punter penalty against New Orleans’ Dwayne Washington.

Nasir Adderly’s interception of Brees and 39-yard return to the Saints 1-yard line set up Herbert’s 3-yard scoring pass to tight end Hunter Henry, which made it 20-3.

Saints coach Sean Payton declined to discuss the absence of star receiver Michael Thomas, who missed the game for punching a teammate during practice on Saturday.

“Let’s talk about the players that played tonight,” Payton said when asked about how he had to adjust his game plan without the 2019 AP Offensive Player of the Year.

Chargers: Early in the second quarter, Keenan Allen left the game with a back injury. Defensive end Uchenna Nwosu was helped off with an apparent leg injury early in the fourth quarter. Those losses came on top of previous injuries that sidelined Los Angeles two starting offensive linemen on the right side and top running back Austin Ekeler.

Saints: Nick Easton left the game in the first half with concussion symptoms and did not return.