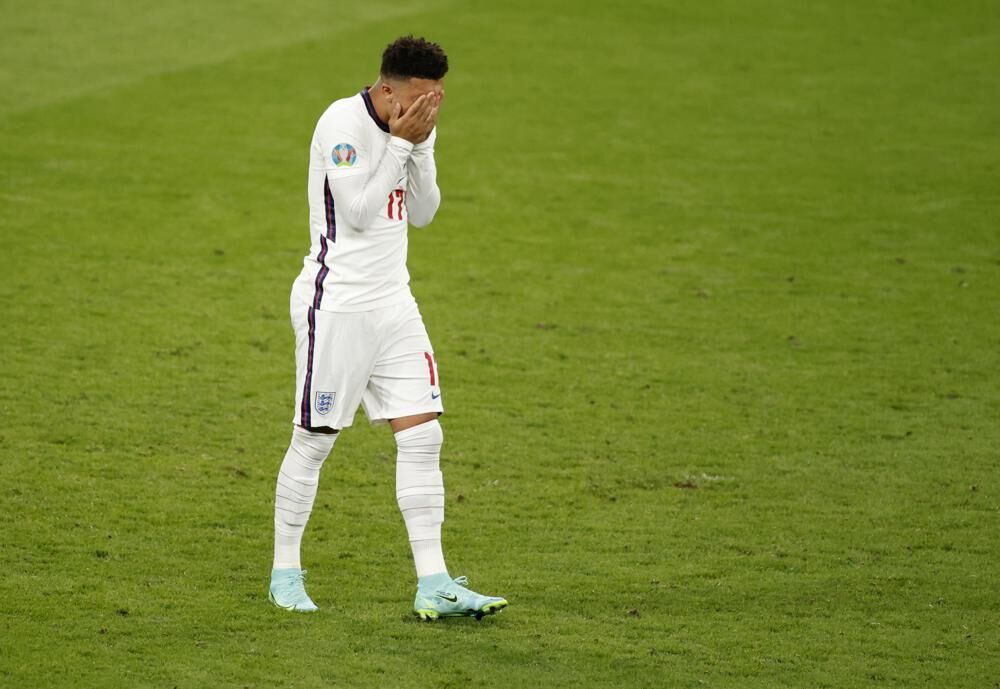 England's Jadon Sancho reacts during a penalty shootout at the Euro 2020 soccer championship final between England and Italy at Wembley stadium in London, Sunday, July 11, 2021. 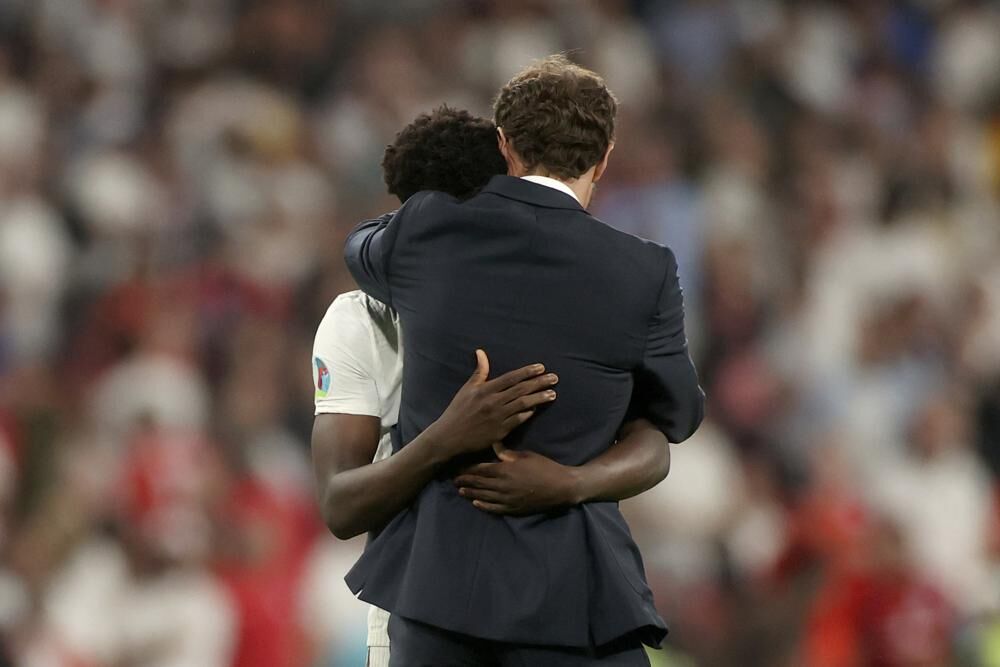 England's manager Gareth Southgate embraces Bukayo Saka after he failed to score a penalty during a penalty shootout after extra time during of the Euro 2020 soccer championship final match between England and Italy.

Police are investigation British police opened investigations Monday into the racist attacks on social media of three Black soccer players who failed to score penalties in England’s shootout loss to Italy in the European Championship final.

The Metropolitan Police condemned the “unacceptable” abuse of Marcus Rashford, Jadon Sancho and Bukayo Saka, and said they will be investigating the “offensive and racist” posts published soon after Italy won Sunday’s shootout 3-2 following a 1-1 draw. A mural of Rashford on the wall of a cafe in south Manchester was also defaced with graffiti in the wake of the match.

The racist outbursts, which were condemned as “unforgivable” by England coach Gareth Southgate, has led to calls for social media companies, such as Facebook and Twitter, to do more in hunting down the perpetrators of the abuse.

All three players targeted are part of a young England squad that has been widely praised for its diversity and social conscience. Rashford, for one, has been at the forefront of a campaign against child poverty, which convinced the British government to restore free lunches for thousands of poor children amid the coronavirus pandemic.

“We have been a beacon of light in bringing people together, in people being able to relate to the national team, and the national team stands for everybody and so that togetherness has to continue,” Southgate said Monday.

The abuse was widely condemned, with Prince William, the president of the English Football Association, saying he was “sickened” by the racism aimed at the England players.

“It is totally unacceptable that players have to endure this abhorrent behaviour,” he wrote on Twitter. “It must stop now and all those involved should be held accountable.”

British Prime Minister Boris Johnson on Monday told those who directed racist abuse at some of the players that he hoped “you will crawl back under the rock from which you emerged.”

But he has faced criticism for emboldening those booing the England team for taking a knee before their matches to protest against racial injustice.

Last month, Johnson’s spokesman said the prime minister is “more focused on action rather than gestures.” That comment led to widespread criticism that Johnson was effectively encouraging those booing to carry on. Three days later, his spokesman changed tack, saying the prime minister “respects the right of all people to peacefully protest and make their feelings known about injustices” and that he wanted them to cheer the team and “not boo.”

Keir Starmer, leader of the main opposition Labour Party, accused Johnson of a failure of leadership for not calling out the booing of the England team.

In recent years, soccer authorities in England have joined with the players in trying to tackle racism both within the sport — at every level — and in society as a whole.

The English FA said it will give the players affected what support it can and will press on authorities for the “toughest punishments possible” for anyone found to have been responsible.

“We will continue to do everything we can to stamp discrimination out of the game, but we implore government to act quickly and bring in the appropriate legislation so this abuse has real life consequences,” it said.

Social media companies, it said, need to “step up and take accountability and action to ban abusers from their platforms” to ensure that their platforms are “free from this type of abhorrent abuse.”

Facebook, which owns Instagram, said Monday it tried to remove harmful content as quickly as possible and encouraged people to use the tools it offers to block abuse.

“We quickly removed comments and accounts directing abuse at England’s footballers last night and we’ll continue to take action against those that break our rules,” it said in a statement.

Twitter said the “abhorrent racist abuse” has no place on its platform, adding it removed more than 1,000 tweets and permanently suspended a number of accounts for violating its rules.

“We will continue to take action,” Twitter said, “when we identify any tweets or accounts that violate our policies.”

The British government is planning new laws to enshrine a new legal duty of care on online companies to protect users from harm, including people receiving abusive comments, threats and harassment.