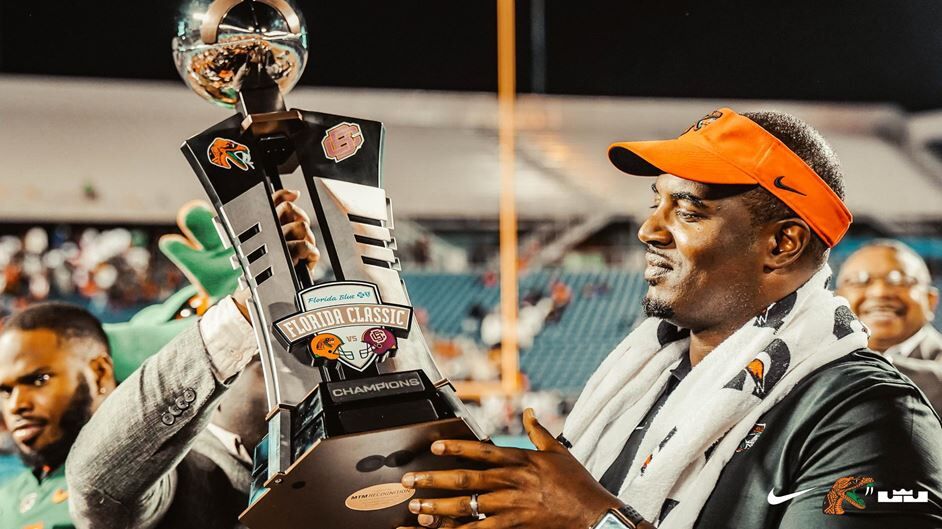 FAMU head coach Willie Simmons receives the Florida Classic Trophy after winning his first matchup against the Wildcats in that role. 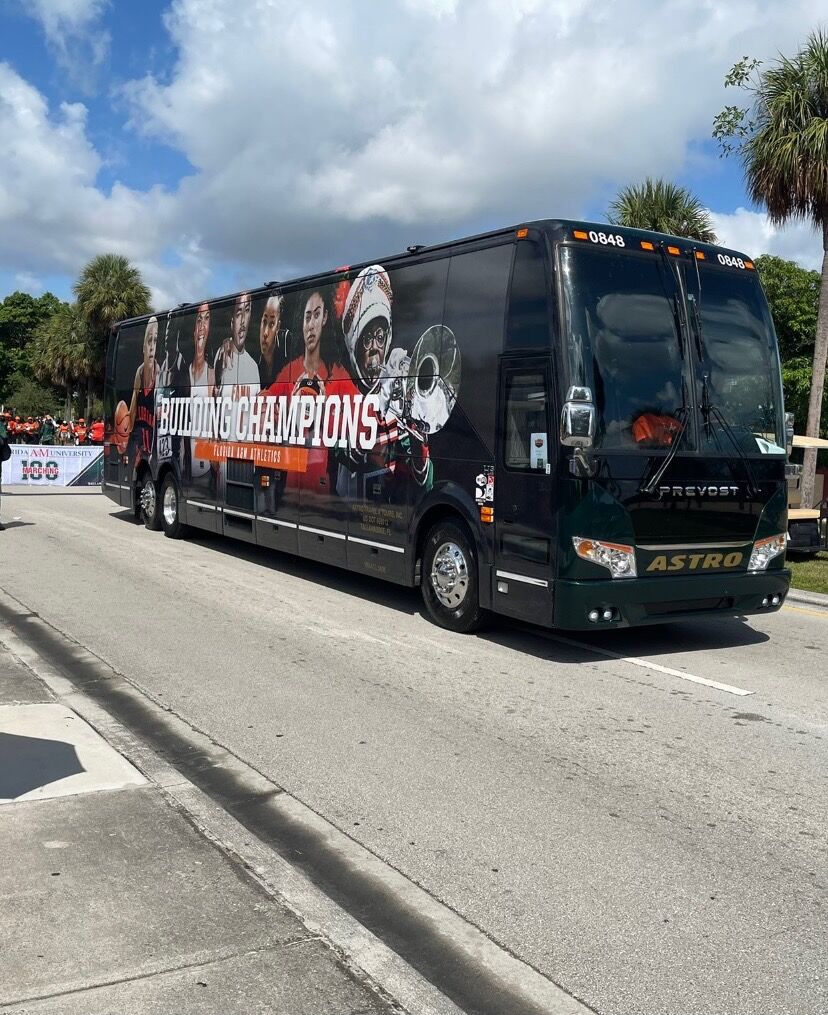 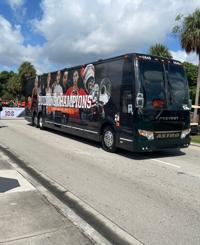 The Florida A&M Athletics team bus hits the road as the Rattlers trek on to the FCS Playoffs. The team will now travel to Hammond, La., after a 43-21 rout in the Florida Classic.

The best team in the state of Florida showed why it has several reasons to be thankful this season. In their first year as a member of the Southwestern Athletic Conference (SWAC), the Florida A&M Rattlers (9-2, 7-1 SWAC) finished on an eight-game win streak.

In their final game of the regular season in the Florida Blue Florida Classic, the Rattlers ended their eight-game losing streak against rival Bethune-Cookman University Wildcats (2-9, 2-6 SWAC) with a 46-21 victory.

The Wildcats started off with an instant big play by scoring on the first offensive snap of the game to take a quick 7-0 lead on an 82-yard touchdown pass from Devin Black to receiver Darryl Powell. After that score, the Rattlers settled down and dominated the rest of the game. They ended the first quarter with a 13-7 lead with scores by receiver Xavier Smith on a 46-yard pass from quarterback Rasean McKay that was followed by a 2-yard run for a touchdown by Jaylen McCloud. No points were scored in the second quarter, but that was the calm before the storm. After an exciting halftime performance by both school’s bands, the onslaught began in the second half.

In the third quarter, the game got out of reach when the Rattlers scored 30 points to extend their lead to 43-7. In that quarter they scored two defensive touchdowns. Both scores were from fumble recoveries, the first by BJ Bohler on a 56-yard scoop and score and the second on a 46-yard fumble recovery returned for a touchdown by Gentle Hunt.

The Wildcats scored twice in the fourth quarter, but the game was already over.

For the Wildcats, Black went 10 of 13, passing for 231 yards with three touchdowns and one interception. He also rushed for 19 yards but was sacked four times. Receiver Powell had three catches for 164 yards and one touchdown.

Bohler was named the game MVP as he filled the defensive stat book with four tackles, one interception, a forced fumble, fumble recovery and one defensive touchdown.

Florida A&M continues to lead the all-time series 51-24-1 against Bethune-Cookman.

Florida A&M’s football season will continue to the postseason after being announced as one of the 24 teams in the 2021 FCS Playoffs. The Rattlers will head to Hammond, La., to play the Southeastern Louisiana Lions (8-3). The news comes after the Rattlers were unable to clinch a spot in the SWAC championship game due to a loss in the Orange Blossom Classic against Jackson State University.

The silver lining about not being able to play in the SWAC championship is that now FAMU can compete for a national championship. Before the selection, the question arose whether FAMU had done enough to be considered for an at large bid. FAMU head coach Willie Simmons stated: “If our résumé is deserving and we’re one of the top teams in America based on the voting and the analytics, I think we deserve to go play in the FCS Playoffs.”

The Rattlers did enough and after the loss against Jackson State it shaped their season.

“I want to congratulate the FAMU Rattlers. Head coach Willie Simmons, I am proud for you, and I am rooting for you and the Rattlers,” said Jackson State head coach Deion Sanders.

“I am not happy we lost the game (Florida Classic), but I am good with [FAMU] getting a playoff spot and going to see what happens in the playoffs for them. I think it looks good for us as a conference. It will add some validity to everything that's going on,” said Bethune-Cookman Wildcats head coach Terry Sims.

“[The Southeastern Louisiana Lions] pose a huge challenge for us,” said Simmons. “When you match a top offense against a top defense, something has to give. This will be our toughest challenge. That's what you get in the playoffs.”

The Florida A&M Rattlers will face the Southeastern Louisiana Lions Saturday, Nov. 27, at 7 p.m. EST. The game will be televised and streamed on ESPN+.