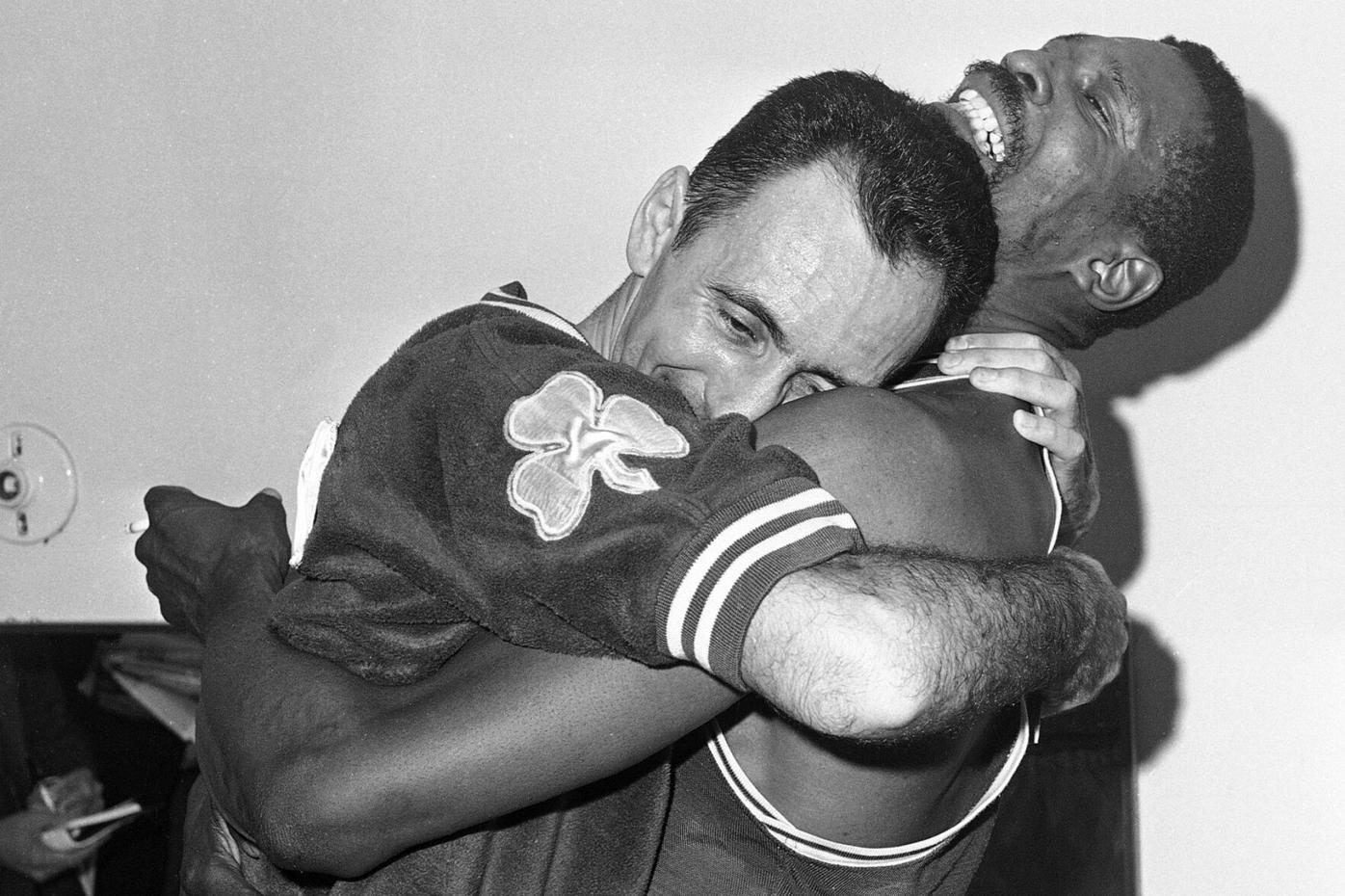 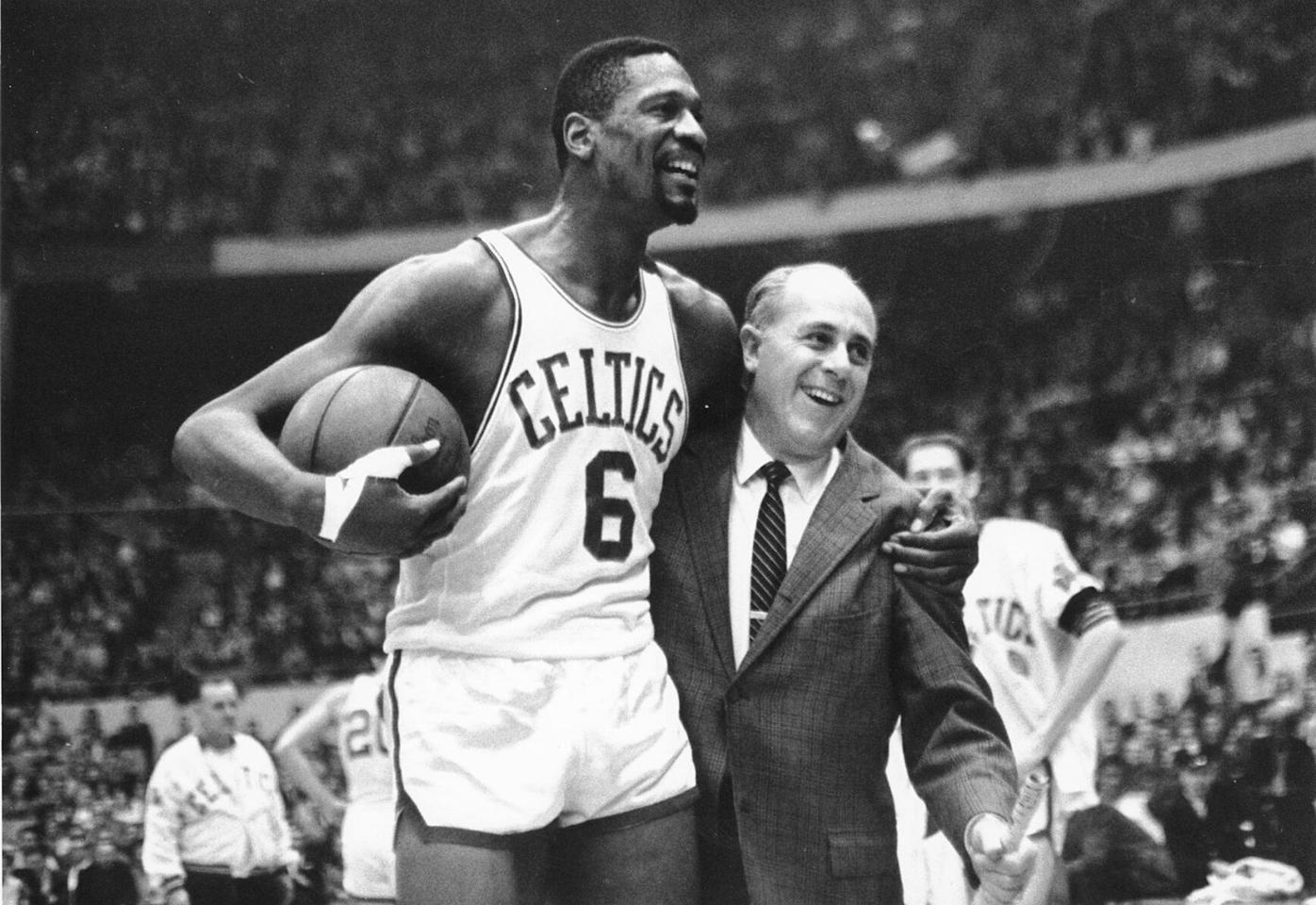 Bill Russell, left, star of the Boston Celtics is congratulated by coach Arnold “Red” Auerbach after scoring his 10,000th point in the NBA game against the Baltimore Bullets in Boston Dec. 12, 1964.

Sam Jones remembers the NBA landscape in the 1960s being only marginally different from what he had experienced growing up in America’s segregated South.

“There was a quota for Blacks when I came in 1957. There were only two players on each team that were African Americans,” recalled Jones, a member of 10 Boston championship teams, including the eight consecutive titles the Celtics won from 1958-66.

The 1960s were a time of ongoing struggle and crisis across America, when the country was forever altered on a “Bloody Sunday,” Dr. Martin Luther King Jr. spoke of his dream, and Black athletes raised their fists and voices in hopes of holding America to its creed.

George Mikan and the Lakers’ run of championships in the ’50s had provided some buzz around the NBA. Boston then followed with eight consecutive titles – part of 11 in 13 years won by Hall of Famer Bill Russell – the kind of on-court dominance the young league had never seen before.

But on-the-court successes certainly didn’t shield the league’s Black players from the realities that existed off the court, as activists challenged Jim Crow’s grip in the South and the Vietnam War was becoming an increasing flashpoint. Players who spoke out risked everything.

“What we did, we did kind of behind the scenes as best we could, because a lot of us were insecure at the time because there weren’t that many of us to begin with,” said Wayne Embry, who played 11 seasons in the NBA and was on the Celtics’ 1968 championship team before becoming the league’s first Black general manager in 1972. “When you are on non-guaranteed contracts ... if management didn’t like what you were doing, you were gone.”

That awareness was a common thread among players who challenged the status quo.

“Sacrifice is what strongly characterizes an activist,” said Len Elmore, who played 10 seasons in the NBA and is a senior lecturer at Columbia University where he’s taught on athlete activism and social justice in sports. “Back in those days those guys could have not only lost their positions but been forgotten by history.”

Even star players on premier teams weren’t immune from indignities of racism.

“There were a lot places we couldn’t eat (as Black people),” Jones said. “If the hotel where we were staying was closed … sometimes we’d just have to wait until the next morning to get food.”

Jones said Black players in Boston had a champion in Red Auerbach, who ruled at the helm of the Celtics’ dynasty.

Auerbach was known for his demanding style, but the coach also recognized how his players were affected by what was happening in the world. Jones remembers one example in 1961, when he, K.C. Jones, Satch Sanders and Russell refused to play in an exhibition game in Lexington, Ky.

The team was in its hotel when Sam Jones asked Sanders to go to the lobby to get some food. They were refused service.

The duo were met by Russell and K.C. Jones. After Sam told them what had happened, Russell implored them to talk to Auerbach. The coach called the hotel manager, who quickly relented and said he’d allow the players to eat in the restaurant. It wasn’t enough for Sam Jones.

“Once we eat in the hotel, Blacks will never eat down here again until something happens. So I’m going home,” he told Auerbach. “And the rest of the fellas decided that they would go home also. And Red took us to the airport.”

A decade after the Supreme Court’s landmark Brown vs. The Board of Education decision in 1954 declared schools separated by race to be unequal, Boston fought desegregation measures by its state legislature. It led to violent protests over court-ordered busing in the ’70s.

It’s also why Elmore believes it made sense that Auerbach tapped Russell to be the team’s player-coach when Auerbach retired following Boston’s title in 1965-66. Russell led the team to a pair of titles in the dual role in 1967-68 and 1968-69.

But there was no escaping the issues for Black players, prompting Russell to tell reporters in 1964: “I’d rather die for something than live for nothing.”

For a player of his prominence to show a willingness to put his convictions ahead of his athletic career put him in a small group during that time, like Muhammad Ali, Lew Alcindor (now Kareem Abdul-Jabbar) and Jim Brown.

Russell’s actions also inspired others in the 1960s, like when Black and white players led by Jerry West, Oscar Robertson and Elgin Baylor nearly refused to play in the 1964 All-Star game over a dispute with owners about labor conditions. The NBA was about to broadcast live for one of the first times and owners stood to reap a huge windfall.

The players barricaded themselves in the locker room and the game was briefly delayed. It forced then-Commissioner Walter Kennedy to recognize the players’ union and commit to their pension plan demands. Robertson became the first Black president of any national sports or entertainment union the following year.

“As far as I’m concerned, that’s the changing of the guard for the player,” West said. “It’s led to the players and the league basically being partners. To me ... it’s been an amazing transformation to see what’s happened to the game since then.”