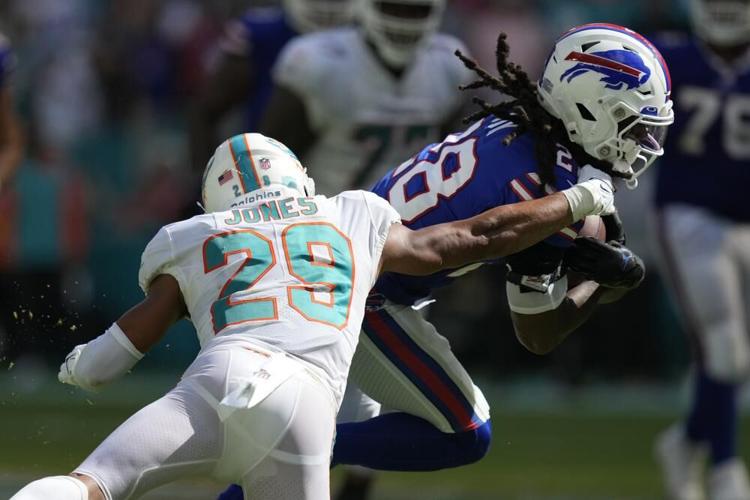 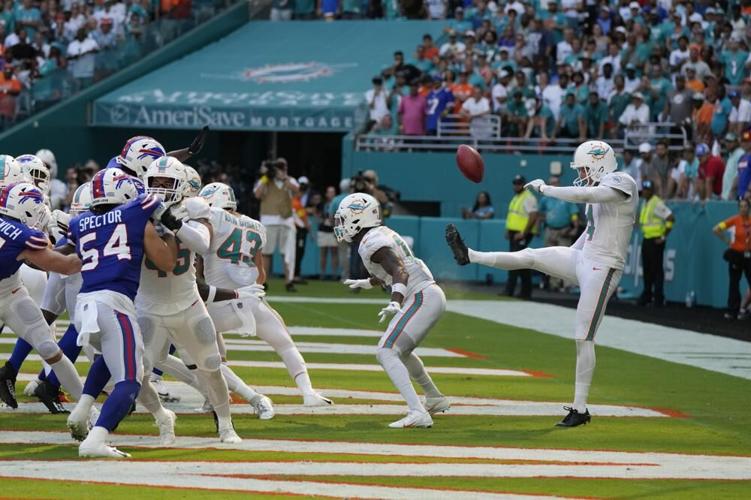 Miami Dolphins punter Thomas Morstead (4) sees the ball go backwards after attempting a punt during the second half of Sunday’s game against the Buffalo Bills Sept. 25, 2022, at Hard Rock Stadium.

The first-place Miami Dolphins are on their way to Cincinnati to play the Bengals on Thursday following Sunday’s big win against the Buffalo Bills, despite a string of butt jokes because of the play that went wrong.

It all started when Thomas Morstead stepped into the middle of Miami’s end zone, swung his powerful right leg and booted a punt right into the backside of blocker Trent Sherfield.

Miami overcame what was quickly dubbed the “butt punt” by shutting down Josh Allen and the Buffalo Bills twice in the final minutes, improving to 3-0 with a 21-19 victory that ended with Allen desperately trying to spike the football on the edge of field goal range. The Dolphins held on for the last laugh against the reigning AFC East champions instead.

“I don’t like these shock endings,” Dolphins coach Mike McDaniel said. “But I’m just really, really happy for the team because this much I do know: Teams win football games, and if you are going to have success over the long haul, you have to have confidence that whatever phase can win a football game for you, can go ahead and do that.”

Dolphins quarterback Tua Tagovailoa briefly left the game in the second quarter, returning after halftime despite appearing to be disoriented by a head injury – the team clarified later that actually, he had an issue with his back. He finished with 186 yards and a touchdown pass to River Cracraft.

Allen was also scraped up, getting X-rays on his right hand after the game after banging it on a helmet or face mask. He insisted he was fine after.

The Dolphins’ defense did just enough to stall Allen twice in the fourth quarter, the first effort a goal-line stand that followed a go-ahead rushing touchdown by Miami’s Chase Edmonds.

Allen threw incomplete on fourth down from the 2-yard line, ending a 17-play, eight-minute drive – and seemingly Buffalo’s chances for a comeback win.

But then Tagovailoa and the Dolphins went three-and-out, leaving Morstead with little room to kick the ball away.

It wasn’t enough space. The kick clanked right off Sherfield and went out the rear of the end zone for a safety – a mishap drawing immediate comparisons to Jets quarterback Mark Sanchez’s infamous “butt fumble” from 10 years earlier. Sanchez ran into the bottom of lineman Brandon Moore, jarring the ball loose.

“Woah… stay out of my lane bro,” Sanchez tweeted at Morstead.

Allen had about a minute to guide Buffalo into field goal range, and did so, but the Bills ran out of time. Isaiah McKenzie tried for extra yards on a completion from Allen, costing precious seconds. Dolphins players started celebrating when the clock hit zero with Allen just stepping under center.

Bills offensive coordinator Ken Dorsey slammed his headset and began throwing paper and notebooks in the coaches’ box when time ran out.

“It was only 14 or 12 seconds,” said Dolphins linebacker Melvin Ingram, who had a fumble recovery in the first half. “You run around, throw the ball. He runs all the way around, that clock is going to down.”

Miami took the lead with about 10 minutes left in the game, scoring a touchdown to go up 21-17. It was the Bills’ first deficit of the season.

“You should win those games,” Bills coach Sean McDermott said. “We just didn’t take care of the ball enough and come away with some takeaways.”

The Dolphins’ 21 points was the most Buffalo has allowed all season.

“We used about everybody we could on the sideline there,” McDermott said.

In the fourth quarter, Miami’s Jaylen Waddle caught a 32-yard pass along the right sideline, then added a 45-yard reception on third-and-22 to set up Edmonds’ eventual touchdown run.

Meanwhile, the Cincinnati Bengals had an 0-2 record headed into the weekend. They were one loss away from spiraling, but pulled out a win, beating the Jets, 27-12 on Sunday at MetLife Stadium.

"We just needed to get the first win," Bengals head coach Zac Taylor said. "I didn’t really care what it looked like.”

The Dolphins play the Bengals Sunday, Aug. 29, at 4 p.m. at Paul Brown Stadium in Cincinnati. Catch the game on CBS4.